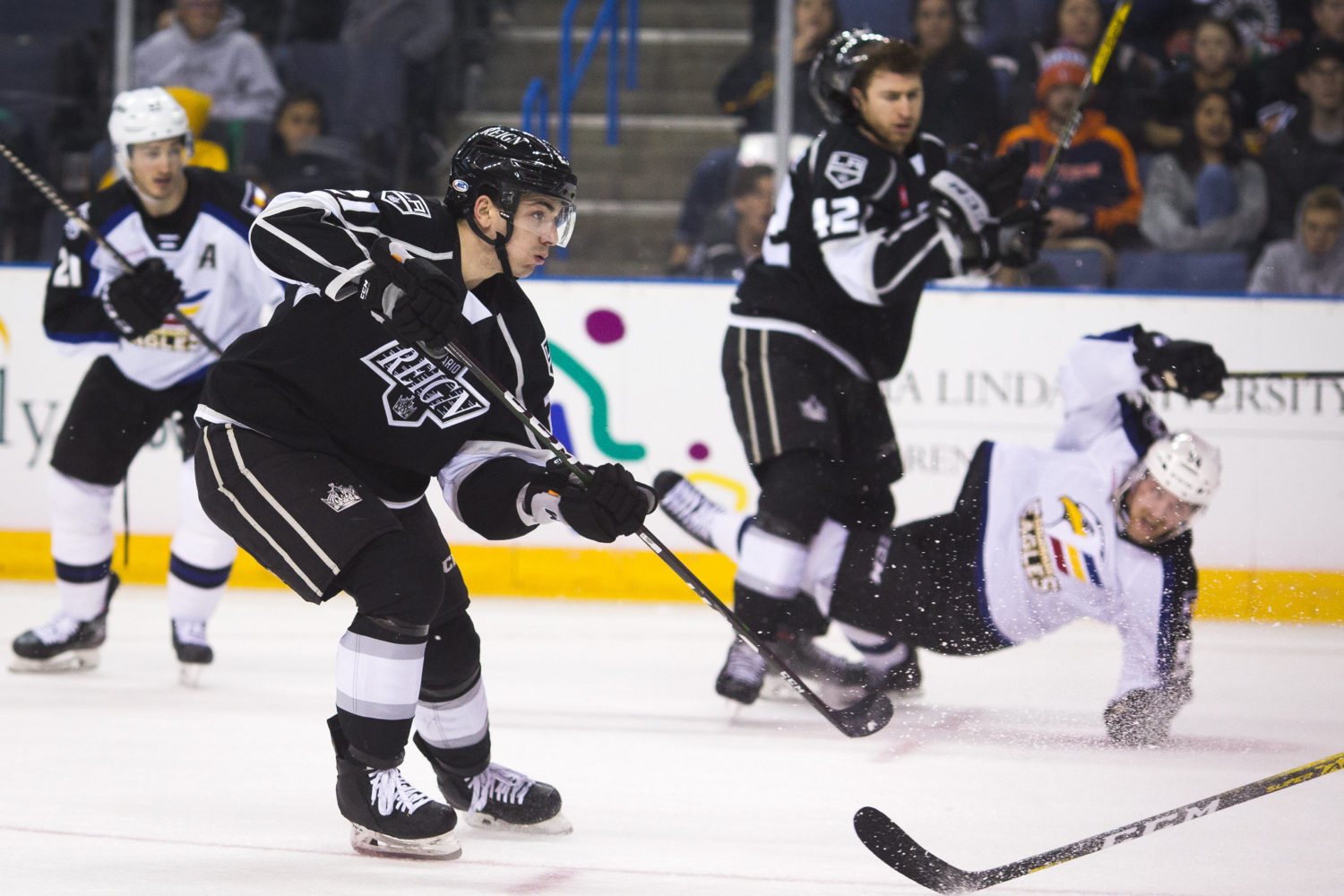 TONIGHT’S MATCHUP: The Ontario Reign and Colorado Eagles are back in action this evening, in a rematch of last Sunday’s game at Toyota Arena. Ontario won the first meeting, by a 6-3 final on home ice.

WHAT TO WATCH FOR: The Ontario Reign skated this morning at Toyota Arena, with goaltender Matthew Villalta off the ice first. Villalta started five consecutive games for Ontario, and went 4-1-0, before Kevin Poulin took the net on Sunday. Daniel Brickley was the lone skater on late, which leaves the Reign with 19 skaters for 18 spots, with the final decision made closer to puck drop.

PLAYOFF PICTURE: With Sunday’s victory, Ontario moved to within three points of the Eagles for the third seed in the division, though Colorado holds two games in hand. The Reign currently hold the final playoff position in the division, leading the San Diego Gulls by two points. Ontario and Colorado will meet four more times down the stretch, with each team home twice, while the Reign and Gulls will play three more times.

COLD AS EYSS: Ontario forward Mikey Eyssimont led the Reign on Sunday as he posted an AHL career-high four points (1-3-4) and a +4 rating in his team’s win over the Eagles, with his tally serving as the game-winning goal. Eyssimont is currently Ontario’s active leader in both goals (12) and points (28) this season, with the second-year forward nearly doubling his points-per-game pace (.57 vs .32) from his rookie season.

HIGH FIVE: Reign forward Carl Grundstrom put together another multi-point effort, as he extended his scoring streak to five games with a goal and an assist on Sunday against Colorado. Grundstrom, who has multiple points in three of his last four games, has compiled nine points (3-6-9) over his current streak. Grundstrom is one of three Ontario skaters with double-digit goals this season, and is tied for third on the team with 25 points.

POULINSANITY: Goaltender Kevin Poulin made his Ontario Reign debut on Sunday, and earned the victory, as he made 31 saves on 34 shots. Poulin’s win was his first this season in the AHL, after he went 0-1-2 in three games with Grand Rapids, despite a .915 save percentage and a 2.22 goals against average. All-time, Poulin has appeared in 322 professional games, including now 189 in the AHL.

V1LARD1: Forward Gabriel Vilardi made his NHL debut with authority last night at STAPLES Center. Vilardi scored his first career NHL goal on his first career NHL shot, and finished with two points (1-1-2) on the evening. Vilardi, who was named as the game’s first star, also assisted on fellow Reign alum Martin Frk’s goal. Vilardi had 25 points (9-16-25) from 32 games with Ontario prior to his recall.

SCOUTING THE EAGLES: Including a pair of tallies on Sunday against Ontario, defenseman Jacob MacDonald is the AHL’s highest scoring defenseman both during the month of February, with five goals, and on the season, with a league-high 14 goals. MacDonald, who is four goals clear of the next closest defenseman this season, ranks second on the Eagles in total scoring this season with 37 points, and is the only Colorado player to appear in all 48 games to date.