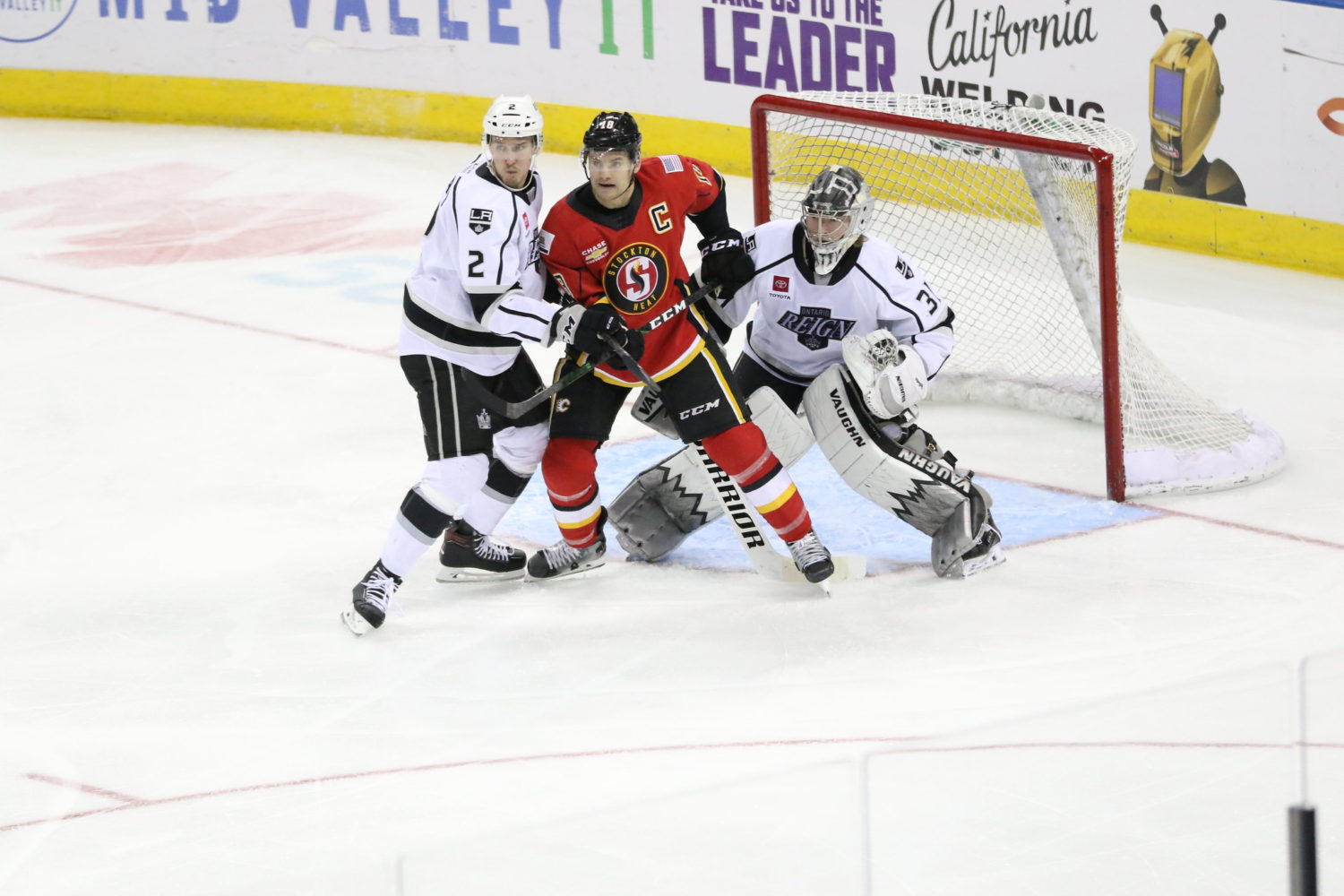 The Ontario Reign made it eight wins from their last nine games played with a 6-3 victory over Stockton on Friday evening. The Reign win, combined with a San Diego loss in Iowa, gave the Reign the fourth and final playoff position on both points and points percentage, with both teams in action once more this weekend.

Ontario got things started early as Sheldon Rempal scored less than a minute into the game, one of three first period tallies for the Reign on the evening. Brett Sutter and Matt Luff also scored for Ontario in the opening 20 minutes, as the visitors took a 3-1 lead into the intermission.

A Blaine Byron breakaway goal gave the Reign a three-goal lead early in the second period, before Stockton came back with two goals of its own, one late in the second and one early in the third, to pull within a goal. Ontario was able to shut things down with a Boko Imama insurance goal, giving him three points (2-1-3) over his last four games, and an empty-net tally from Byron to seal the deal.

The Reign look to keep things rolling this weekend, with the third-placed Colorado Eagles visiting Toyota Arena. Colorado hasn’t been in Ontario since October 11, and the two teams will meet on Sunday and the following Friday in the Inland Empire, with the teams separated by three points in the Pacific Division standings.

ZD: We talked about not being happy with the starts in each of the past two games. Tonight, three goals in the first, looked like the guys were ready to go from puck drop. Happier with how the group started tonight?

MS: Much better start, and it lead to a well played first period. Very solid 20 minutes of hockey by all four lines. We started our grinders and bangers first shift of the game. Boko-Bouma-Doty sent the message that we were going to be pushing and hunting all night long. We hunted loose pucks and we hunted bodies

ZD: I was wondering if we’d see a scrap off that opening faceoff with those starters….good way to get things going.

All year, guys have stepped into larger roles, and lately it’s been Matty Villalta. Have you been impressed with how he’s owned the moment over these last few games?

MS: I told our guys they were NOT to fight on the opening shift. After the first shift, they could then do whatever was necessary to dictate the game. Staged fighting is archaic and serves no purpose. Play hard, and spontaneous fights will occur and I am quite confident in the ability of our role players.

Matty V has really come into his own. He spent the early part of the season watching and mimicking the work ethic of Cal. He has dug in to form his own identity and works well with our goalie coach Matt Millar