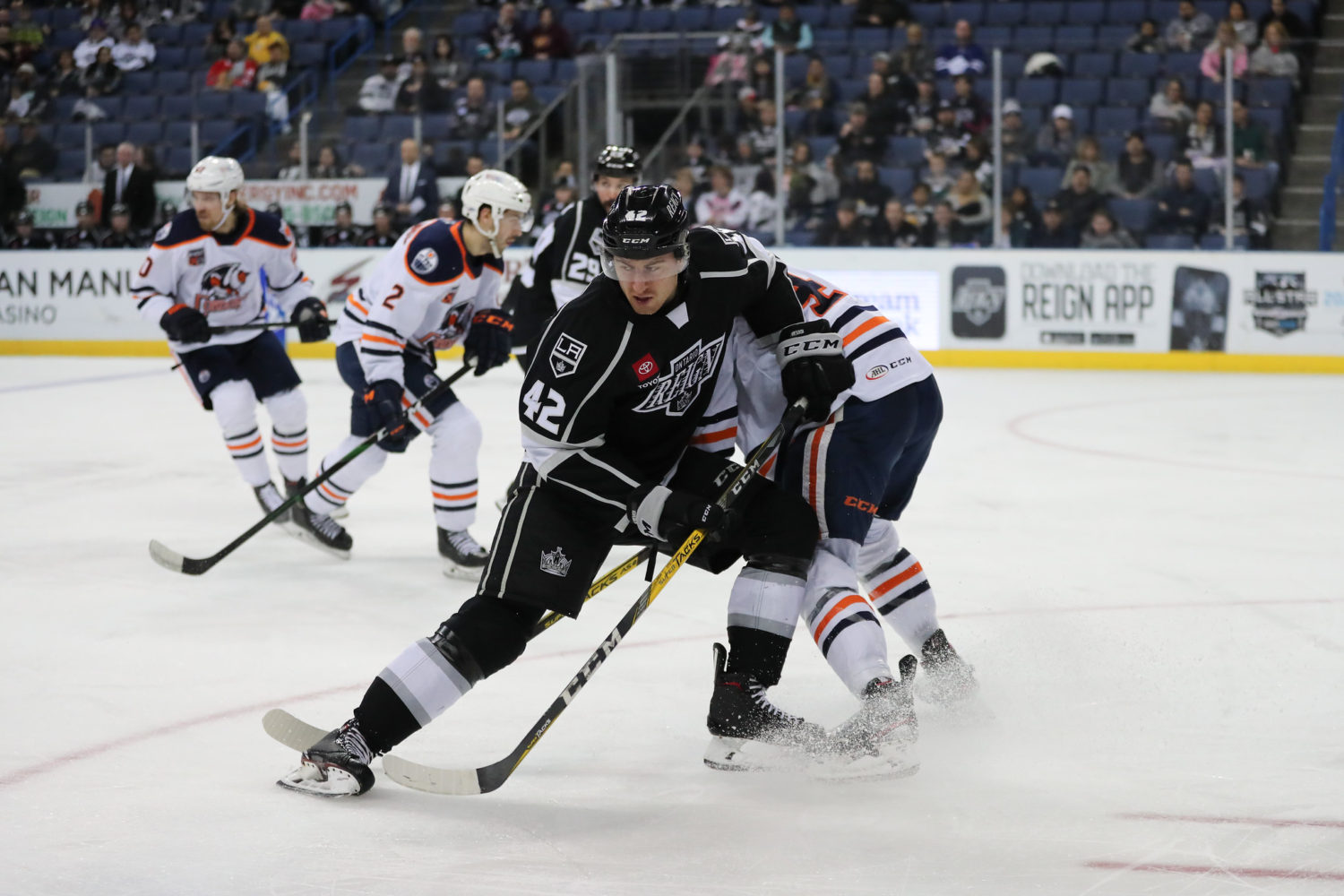 TONIGHT’S MATCHUP: The Ontario Reign are back at home for a midweek tilt against the Bakersfield Condors. Ontario went 1-1 last weekend, ending with a 5-1 defeat against the Tucson Roadrunners on Saturday evening in Ontario.

A TALE OF TWO CITIES: Ontario and Bakersfield have each controlled the season series away from home this season. The Reign concluded their campaign in Bakersfield at 5-1-0, with a 10-3 win on Friday the cherry on top. The Condors, however, are 3-1-0 at Toyota Arena this season, with the Reign earning only three points from four games against Bakersfield on home ice. The two teams will meet just once more this season after tonight, on Saturday, 2/29 in Ontario.

SIX PACK: Reign forward Mikey Eyssimont extended his scoring streak to six games with an assist on Austin Strand’s goal on Saturday. Eyssimont’s streak dates back to January 24, and the second-year forward has six points (2-4-6) over that span. The St. Cloud State product ranks second in points with the Reign this season, with 24 (11-13-24) from 46 games played, and is one of two Ontario skaters with double-digit goals.

SHOOTING STAR: Ontario defenseman Austin Strand scored his team’s lone goal on Saturday, his eighth tally of the season. Strand’s eight goals have come on 60 shots on goal, with his 13.3 shooting percentage ranking second amongst qualified defensemen, and first amongst defensemen with at least 25 shots on goal. The second-year blueliner is tied for sixth in the AHL in goals by a defenseman this season, with teammate Kale Clague also on eight tallies.

V IS FOR VILLALTA: Despite the 5-1 defeat, goaltender Matthew Villalta set AHL career highs in both saves (37) and shots faced (42) on Saturday against Tucson. Despite the loss on Saturday, Villalta is 6-2-1 in his last nine starts, and has just three regulation losses in games he’s started this season. In that span, the rookie goaltender has posted a .910 save percentage – Read more on Villalta’s opportunity as the starting netminder here.

GABE FROMAN: Reign forward Gabriel Vilardi collected an assist on Saturday against Tucson, as he extended his assist streak, and overall point streak, to four games in the process. The 20-year-old forward has seven points (3-4-7) over the four-game span, with a +8 rating in the process. Overall this season, Vilardi has 21 points (8-13-21) from 29 games played with the Reign, and leads players on the active roster at 0.72 points-per-game.

A FRK’N ROSTER MOVE: Ontario made a trio of roster moves today, with forward Martin Frk recalled by the Los Angeles Kings, forward Carl Grundstrom assigned to Ontario and forward Mason Bergh assigned to Fort Wayne. Grundstrom returns to the Reign with goals in back-to-back games, while Frk departs as Ontario’s leader in goals (23) and points (36), ranking second in the AHL in goals-per-game (0.62). Bergh has three points (2-1-3) from 25 games with Ontario.

SCOUTING THE CONDORS: Bakersfield exchanged forwards Tyler Benson and Colby Cave this week, with Benson rejoining the Condors and Cave heading to the Edmonton Oilers. Benson made his NHL debut on February 5 against San Jose, and skated in two games with Edmonton before he returned to the Bakersfield lineup with an assist on Sunday. Benson leads all Condors skaters with 27 assists and 36 points on the season.