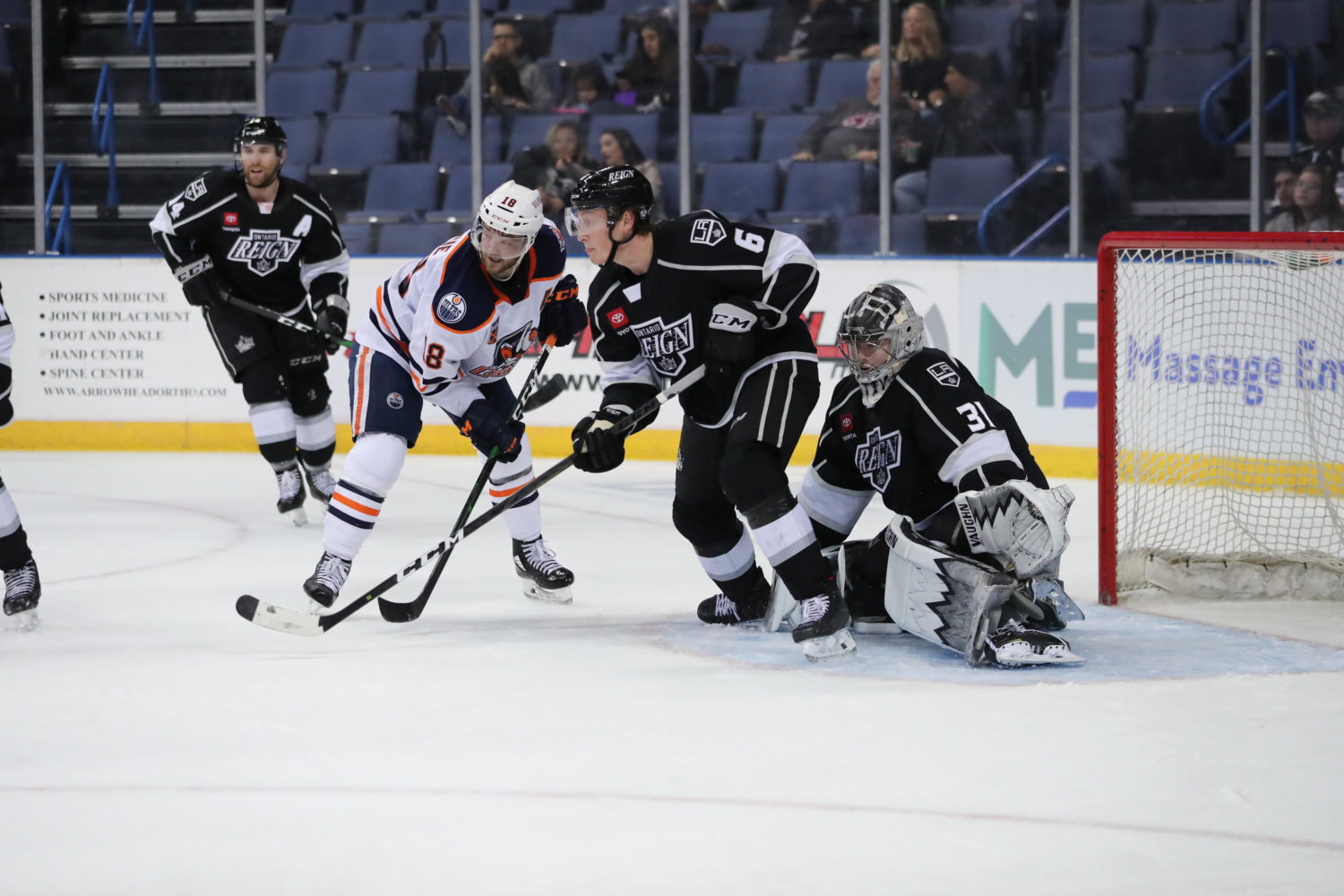 Through 40 minutes, it looked like Ontario was headed to a second consecutive defeat on home ice. The Reign lacked energy, and thus offensive opportunities, as they trailed 2-1 at the second intermission.

An adjustment was needed and Head Coach Mike Stothers delivered. Stothers broke up the line of Carl Grundstrom – Gabriel Vilardi – Matt Luff, placing each player on a separate line for the second half of the game. Stothers was unhappy with the work ethic that the trio was providing together, but all three contributed with points in the third.

Luff collected assists on Ontario’s second and fourth goals, while Grundstrom tallied an assist on the game-winning goal, and Vilardi extended his point streak to five games with a power-play goal that provided an insurance tally.

You can keep beating the same dead horse, or you can change it up. Stothers made an adjustment in a one-goal game, which vaulted Ontario to a three-goal third period, and a huge comeback win. With San Diego idle, a win tonight was almost essential. The Reign pulled three points ahead of their rivals from the South, with the Gulls now holding four games in hand. Both teams play twice this weekend, with Ontario next in action on Friday against Stockton, at Stockton Arena.

Yeah, I mean we had a bad start there, that’s not the first period we wanted, especially after what happened last game, we knew they were going to come. I think that’s just a good coaching change by the guys in the coaches room there, it got a speak going and I thought you saw that, guys working well together, forecheck, backcheck, that’s what led us to the win and Matty V back there shutting the door. That’s three straight good games for Matty – that’s a young kid in there and he’s doing a great job.

On playing with Byron and Anderson-Dolan after the adjustments

You look at both of them, they’re both skilled guys. We like the puck, Blainer going to the net there was juge and JAD’er was just working well. I’ve played with JAD’er up top and down here and I think we blend pretty well together and Blainer’s a pretty easy guy to get going. I don’t mind it.

On if it’s easier to get into a groove, when playing a larger role with Ontario

I think it’s just a little bit different of a role when I’m down here versus up there, but at the end of the day, it’s about performing. That’s what I’m trying to do with my game up there and once I start performing, I think those opportunities will come that I get down here. I think it’s just working towards getting back up and showing them that it’s not good enough. Next time I get my chance, just going forward with it and not letting go.

I think it talks to the character in the room. Those guys are right behind us in the playoff push, it’s so tight. You look at three and four, I mean two and one are in there, but right now three and four are grabs and we’ve got Colorado coming here on Sunday and Stockton coming up on Friday, it’s big points. From the coaching staff down, they know how to handle us and get us going, and we’ve got such great leaders in there in Sutts, Stants and Boums. It’s just a good group and we’re looking forward to keeping going and getting in the playoff hunt again.

Actually, it was the ten-minute mark of the second. I didn’t like the lines, I didn’t like Gabe, Grundy and Luffer as a line. They weren’t working, so we mixed it up a little bit. You’ve got to do some things to try and get a spark, get some energy. Sometimes it works and sometimes it doesn’t.

Well tonight, I just wanted to separate all three of them, I didn’t want any of them playing together and you hope they get the message. Listen, we’re trying to make the playoffs here. These guys are trying to be NHL players, and in order to do so, it’d be nice if they worked as hard as the rest of their teammates. You can have all kinds of skill, all kinds of talent but you still have to work. Sheldon Rempal works, Mikey Eyssimont works, Sutts works, so that’s what we’re trying to establish here, this is the culture that we want to have. I thought we have a very lacksidsical game on Saturday and there’s no way we’re going to follow it up with another game. There’s too much at stake. Play hard for your teammates, always.

On if he was happy with how those three responded, after the changes

Yeah, whether you have to do that to get their attention or whatever it takes, but you’re certainly not going to just keep going along and think it’s going to change itself. Sometimes, you have to shake the tree a little bit and anyway, they responded in the right way, so good on them. They’re the players we thought they would be in the latter stages of the game, but let’s not be waiting until halfway through the game, let’s start that way.

On Blaine Byron and Brett Sutter getting rewarded with big goals

We should be priding ourselves on our work ethic, being a team that’s hard to play against, and those guys do it, night after night. It is nice to see them get rewarded. They don’t always get on the scoresheet, but they very seldomly disappoint in work ethic. I’ve got all kinds of time for people who work.