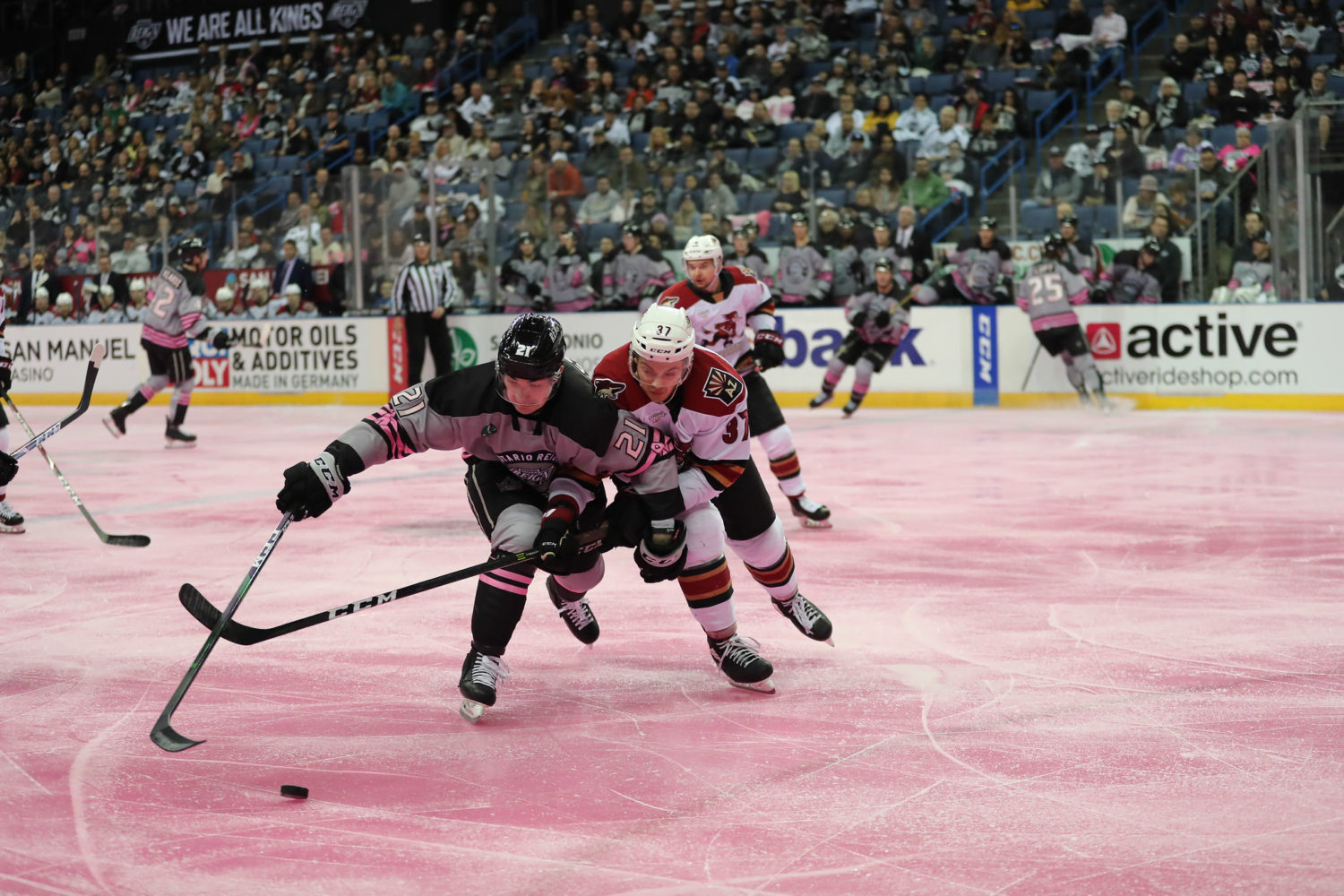 For the first time since mid-January, the Ontario Reign failed to pick up a point as they fell by a 5-1 final to the Tucson Roadrunners on Saturday evening at Toyota Arena.

Ontario conceded the first four goals of the game, before a third-period tally from Austin Strand got them on the board early in the final frame. With his goal, Strand now has eight on the season, and leads all defensemen in the AHL in shooting percentage (13.3 on 60 shots on goal).

It was a troubling way to end what has been a terrific run. Ontario entered tonight with six consecutive victories, and points in eight consecutive games, but was unable to get things going tonight against Tucson. There was a feeling of disappointed within the Reign locker room, seeing such a good run as of late end with that type of loss.

The Reign are back to the drawing board on Monday, with two days of practice before a midweek tilt against Bakersfield.

Brett Sutter on what it is about Tucson that has given the Reign trouble this season
You know what, I don’t think it has much to do with them, it has more to do with what we’re doing. We got off to a real flat start, that’s really inexcusable, and for whatever reason against these guys, we spend a lot more time in the box than we do worrying about our own game and playing the way we can to be successful. We brought that on ourselves tonight.

On the disappointment of the winning streak coming to an end in that way
Absolutely. I think you’re always trying to build our game, you’re always going to lose a few games, but even those games you want to stick to your detail, stick to your structure and be a hard to play against, competitive team and that’s what we want the standard to be around here. Tonight, we definitely didn’t go that.

On, outside of tonight’s game, the growth the team has shown over the last few weeks
I think that’s the goal every day, is the consistency. We’ve grown as a team. Tonight, we took a step back, but we also know now over the course of the last few weeks, what it takes to take that next step, how we can be successful. A couple hard days of practice here and get back to work, that’s all you can do.

Mike Stothers on the Reign’s struggles against Tucson this season
First of all, we take far too many penalties against them, so that’s problem number one. We spent way too much time killing penalties, or finding ways to take another one, and we already know they have a pretty good power play. They don’t want to get into that game. They’ve got a bunch of little guys, that like to embellish, dive and fall and think that’s okay to play the game that way, and apparently it works for them, and if the refs keep falling for it, then it’s bad on us, we’re the guilty ones, obviously.

On a lack of puck possession in the offensive zone tonight
Well, we killed a number of penalties Dools, we didn’t have anything to build on, there was nothing to establish. It was just hang on, kill, kill another one. The bench is short, guys aren’t on the ice, we didn’t get a power play until real late in the game, so I mean there’s two sides to it. Either, you’re not working hard enough to draw some power plays, which we weren’t, I think we were guilty of still celebrating and enjoying the fact that we scored 10 last night. We thought it was going to be easy here tonight and we wanted to play an easy game, and you can’t play an easy game. Every time we try to play an easy game it doesn’t work out. Another lesson.

On taking two steps forward, and then a step backwards tonight
We had a pretty good run I guess, so I guess you’re due for a little bit of a stumble, but that’s inexcusable and unacceptable as far as I’m concerned at this stage of the season. With the importance of points in the standings, and you chip away at the teams that are ahead of you and you want to stay ahead of the teams that are behind you. We did a good job of it last night and we weren’t very good at it tonight. I don’t know what changed in that 24-hour span, but we’ve got to regroup and get ready for Wednesday.

On if it’s disappointing to end the winning streak on a loss like that
Absolutely. We know that we’re not going to win every game, we know that we’re not going to be sharp and crisp every single game, but you don’t even give yourself a chance. That’s where there should be some anger involved, disappointment in letting your teammates down. Poor Matty Villalta, he’s in there and he’s got 42 shots – they had 18 in the second period to our four. Like, at some point, you’ve got to say enough’s enough and at least dig in a little bit deeper for your teammates. That’s a little disappointing, yeah.