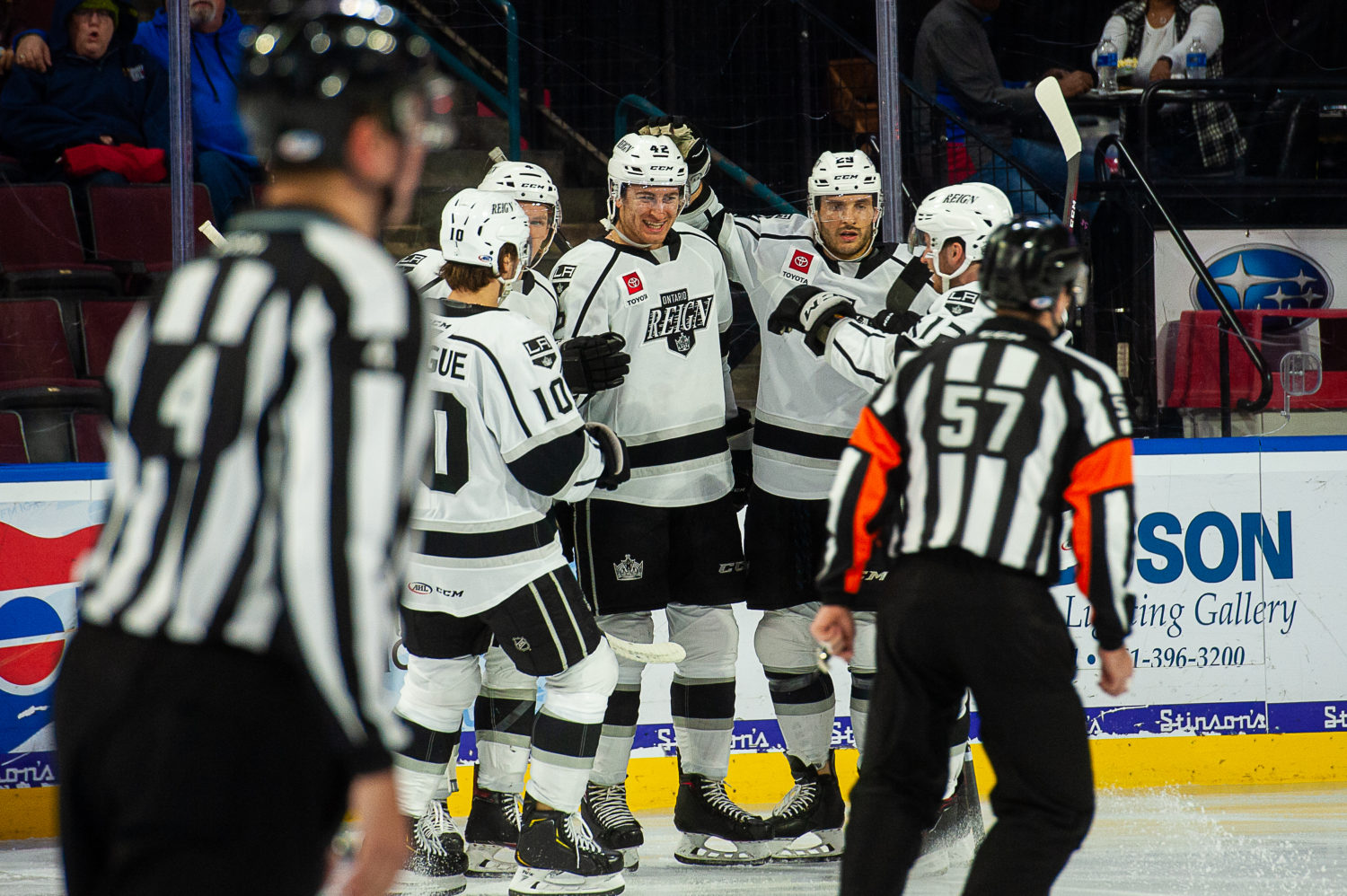 The Ontario Reign extended their winning streak to six games with a statement, in a 10-3 win over the Bakersfield Condors on Friday evening.

The Reign set a franchise record with 10 goals scored, and a second franchise record for goals in a single period with five first-period tallies. Ontario got things started less than two minutes in, and scored four goals on their first six shots of the game, chasing Bakersfield netminder Stuart Skinner inside the game’s first period.

Ontario got two goals apiece from forward Martin Frk, who had an AHL career-high four points in the victory, as well as forward Gabe Vilardi, who tied his career high in goals and points in a game. Forward Boko Imama had a goal, an assist and a fight as he recorded a Gordie Howe Hat Trick. Ontario had eight different goal scorers on the evening, and 15 different players recorded a point.

We’ve preached often this season that a six-goal game only counts as one win, or loss, and in the case of the Reign, it’s been on the losing end a couple of times. 10-3 only counts as one win and two points, but coming against Bakersfield makes it that much more important. The victory creates additional separation in the race for the final playoff berth in the Pacific Division, and the games will continue to remain important down the stretch.

Ontario hosts Tucson tomorrow evening for Pink in the Rink at Toyota Arena, with a 6 PM puck drop against the division leaders. The Reign are 0-5-1 this season against the Roadrunners, and with the form the Reign have had, tomorrow presents a great opportunity to breakthrough.

Martin Frk on his career-high four points tonight
It was good. Pretty much everything you touched, it goes in or you make a pass and the guy scores. It’s always nice to get the points, but it was a big game for us as well. We’re glad we got the two points tonight and we need to bring it tomorrow as well, we’re playing a good team tomorrow, so we need to do a lot of good things tomorrow as well.

On if he’s ever been a part of a win like that as a pro
No, I don’t think I was…I’ve been a part of some games where they score 10 goals, so that’s definitely not fun, but this is the first time ever when we’ve won with a double-digit number. IT’s a good feeling, a lot of guys will feel good, a lot of guys picked up points and scored goals. That should give you a little confidence over the next couple of games.

On getting goals from throughout the lineup tonight
Some guys don’t get that much ice time, so when they get it and when they produce, that’s when they earn more ice time too. Everyone was good today, starting from the goalie all the way to the forwards. It was good, it’s nice to see guys jumping into the lineup and scoring goals, it’s always good. We feel like we have good depth, and we’ve just got to continue…we won’t score 10 goals every game, but when you score five, six goals, you give yourselves a better chance to win the game.

On what has clicked for this team on the current winning streak
I think we just finally figured out how we need to play, and when we do video before the game with how [our opposition] plays, we figure out how to defend it and what will work on them offensively. It’s just the details that I feel we’re doing way better, and finally we’ve started scoring more goals too. I didn’t know it, but we were the lowest team at scoring goals in our division, so it’s definitely a boost for us. We’ve just got to go do things right and work hard every game, because we play only teams in our division. Every point is important for us right now.

Mike Stothers on the 10-goal output tonight
Well, it was good to see. We have been on the other side of those scores a couple of times this season, and it’s not a great feeling. To score early and often was something new for us to experience. What I like more about it is that we didn’t change at all. We didn’t try to become individuals and pad our stats. We stuck to our structure and played a responsible game. Well done by the fellas, 8they did a great job tonight.

On getting goals from all throughout the lineup tonight
It was the perfect storm. Everyone contributed and that is crucial for a team to have long term success. We got the Gordie Howe hat trick from Boko. Sodergran scores a nice goal from the slot, Bjornfot and Clague from the back end. The guys were just jacked to see the puck going in for each other. It was a pleasure to watch these guys celebrate and enjoying one of their team mates score.

On getting a big statement win, after losing Cal Petersen to the Kings
Losing Cal was something we were expecting to happen at some point this season. He deserves to be in the NHL, there was nothing left for him to prove at this level. He won us a lot of hockey games. This was a huge game for us in the standings, and our quest to make the playoffs. It’s tight in our division and everyone has games in hand on us. We have to win these head to head match ups. It was going to take a Team effort and we got that tonight.