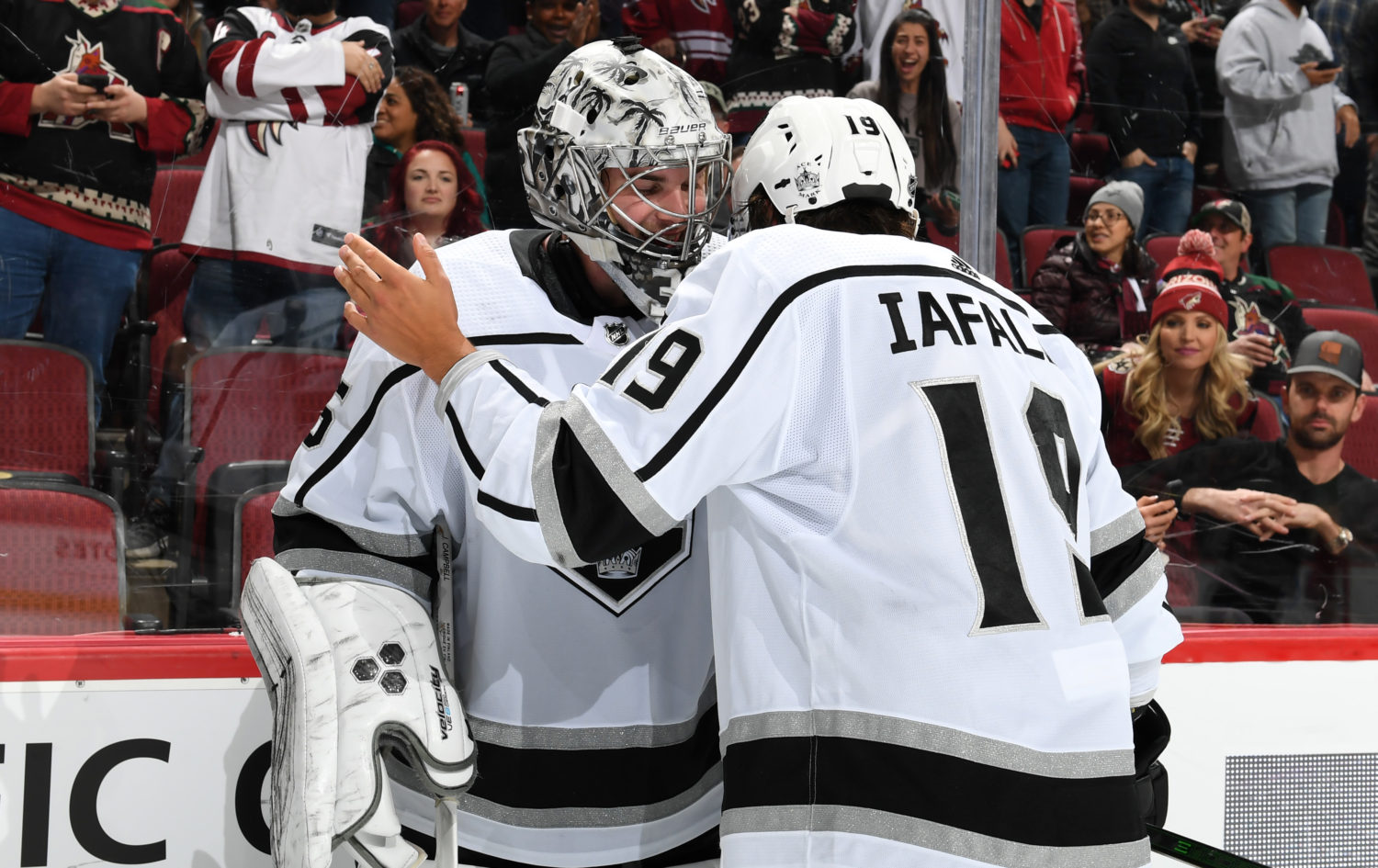 Todd McLellan, on Alex Iafallo and the team’s performance:
Team-wise, we did a really good job in coming back. We weren’t very happy after the second period. We got a little sloppy, the intensity went down and it wasn’t where it needed to be, but the third period was exactly what we needed. Our bench got a little shorter, the lines got shuffled around a little bit, the players responded. As far as the individual player, Alex, his game speaks for itself. He was all over the puck. He was sharp when he shot it. Needed help, though. His linemates did a really good job – Brownie and Kopi – of creating for him, and obviously we’re really excited for him. He’s played well all year, but particularly since Christmas.

McLellan, on the defense as a whole without Drew Doughty:
Well, we played two pretty good teams. We gave up chances, our goaltender saved our bacon a little bit at times, but for the most part they were solid. Used all the D that were available so everybody got an opportunity to play, but make no doubt about it, we’d still like to have Drew in our lineup. He’s a calming influence and certainly a good quarterback on the power play. A penalty killer. But when he’s out, guys have to step up and for the most part they got the job done.

McLellan, on whether the team has been playing consistently but is simply challenged with burying:
No, that’s a good observation. We’ve kind of talked about it all year, especially the media that’s around us. We don’t go away, we’re like teams – we ebb and we flow. We have some bad moments during nights. We struggle to score, we’re getting better at preventing but the team-wide attitude is one we believe we’re getting better and that we’re sticking with things. Nights like tonight pay off. There was a night like last night where we didn’t quite get there. But the belief is that we’re improving and we’re going in the right direction.

McLellan, on the challenges presented by the upcoming trade deadline:
It’s not a surprise to anybody, first of all. So the fact that this team is in transition – it’s been in transition for a year and a half now – it’s not a surprise to anybody. Most of the players that their names are coming up in conversations, we like what they do. We’re happy that they’re part of our organization, and if they continue to be, we’ll be pleased. But the fact is that it’s a business. We’re trying to transition the team and names are going to come up. It’s never comfortable. But I do think, and it’s sometimes not fair but some of the older players understand it. They don’t have to accept it. Nobody does because you’re dealing with families. But I thunk they understand it. [Reporter: Tyler Toffoli would be a perfect example. A guy that you really like, but there’s a reality to deal with here.] Absolutely. Toff’s a tremendous player. I think Toff can be part of the solution as we move forward. It’s not a given that Tyler Toffoli’s going to find a home in three weeks. Perhaps he finds a full-time home here. But what happens between now and then, there’s business that has to be done. He has to make decisions, and the team does, and his job is to play as he has been playing, which is very well. And our job as a staff is to put him in a spot where he can succeed. So far it’s been going pretty well for him and for us.

Rick Tocchet, on how the game got away:
Well they scored. I mean I don’t know what else to say. Guys worked hard but we’re going to stay positive.

Tocchet, on the team’s current struggles:
You are going to have adversity through the season and right now we’re hitting it. We’re having a tough time winning games, we’re right there just needed a play. One or two plays to get that out and we didn’t get it out. The overtime kind of went to the one guy I think, just critical mistakes but I thought we played a pretty good game. We had a couple guys who had a chance at the end to win it, but we didn’t. we just have to stick with it.

Nick Schmaltz, on the loss:
I think our first was pretty good. They got one but I thought we had a lot of chances. I thought we played really well in the second. In the third I thought we were sitting back a little, maybe just trying to preserve the lead instead of trying to stick it to them and step on their throat and end it.

Friday, January 31 is an off-day for the Kings. The next practice will be a 10:30 a.m. morning skate on Saturday, February 1 in advance of that night’s game against Anaheim.