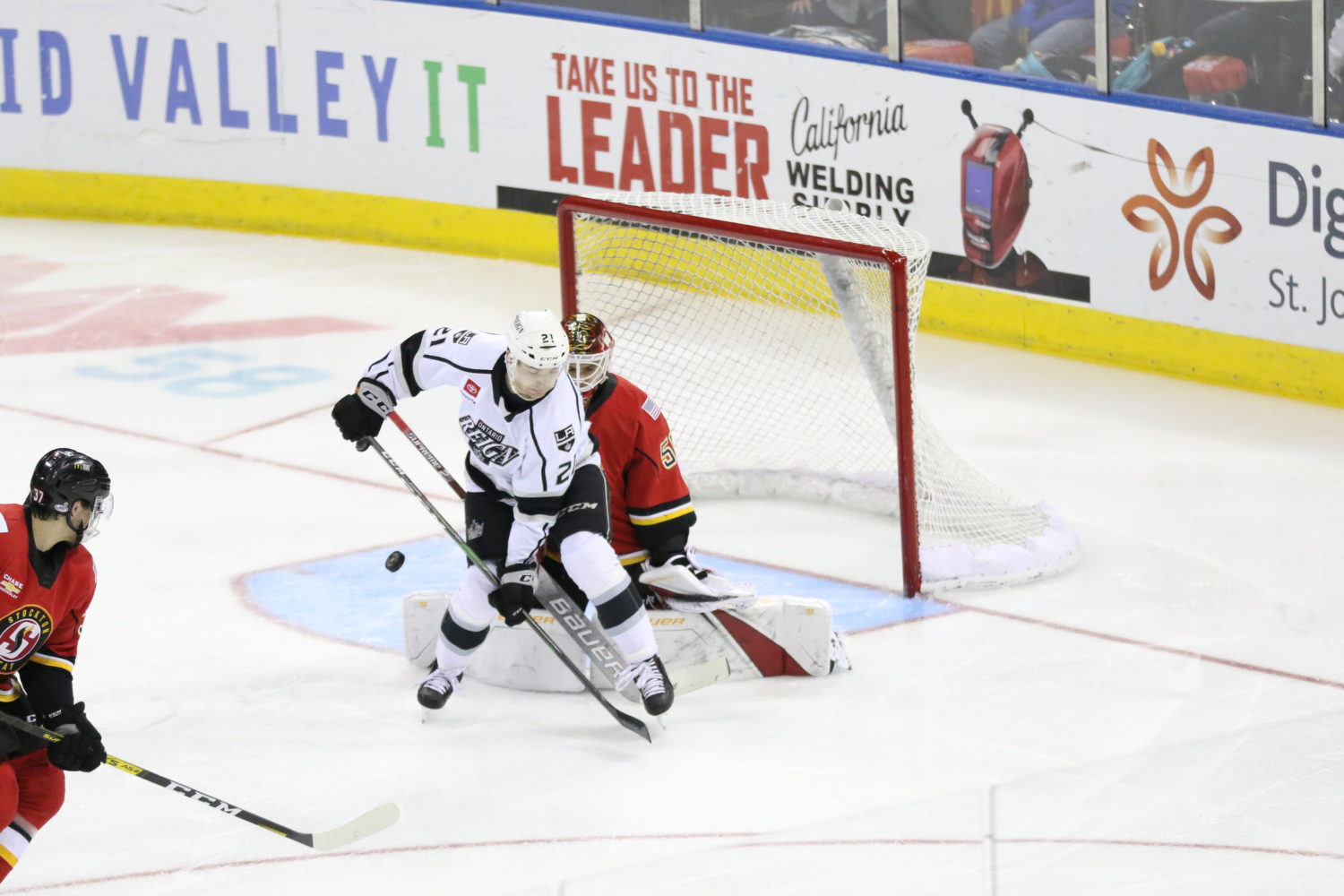 TONIGHT’S MATCHUP: The Ontario Reign are back in action for the final weekend before the AHL All-Star break, beginning tonight in Stockton. The Reign took five of a possible six points last weekend, ending with a 3-0 win over Bakersfield on Monday afternoon in Ontario.

FOUR ZERO: Ontario goaltender Cal Petersen stole the show over the weekend, as he posted a 33-save shutout against Bakersfield in a 3-0 win on Monday afternoon. Petersen made 83 saves in total, on 84 shots faced on the weekend, as he compiled a 2-0-0 record, a .988 save percentage and a 0.50 goals against average. Petersen is slated to represent Ontario at the AHL All-Star Classic this weekend, his second All-Star nod in the AHL.

ANDERSON-GOALAN: The Reign welcomed back forward Jaret Anderson-Dolan to the lineup on Monday, and the 20-year-old forward collected a goal and an assist in the win over Bakersfield. With a multi-point game, Anderson-Dolan became the second Ontario player this season to break the 20-point mark, with now 21 points (6-15-21) on the season. The rookie forward skated in four games total during his first recall of the season to the NHL.

TOP LINE TRIO: Ontario’s top line of Carl Grundstrom (1-2-3), Gabriel Vilardi (1-2-3) and Martin Frk (4-0-4) were each at or over a point-per-game on the weekend, as the unit combined to post 10 points across the three games. Vilardi’s two assists on Monday marked his first career multi-assist game in the AHL, while Grundstrom’s two helpers on Friday tied an AHL career high. Frk has now scored two goals in a game twice this season, and 13 times in his AHL career.

MINUS MARTIN: The Reign will be without their leading scorer, forward Martin Frk, who will miss tonight’s contest while serving a one-game suspension. Frk leads all Reign skaters with 20 goals and 30 points this season, with his 20 tallies tied for sixth in the AHL this season. Frk has scored in five consecutive games in total, and will enter the All-Star break with points in ten consecutive home contests – Frk extended both streaks with a goal in Monday’s win.

BLAKE OF THE YEAR: While it remains to be determined if he will feature tonight against Stockton, the Kings assigned forward Blake Lizotte to Ontario yesterday. Lizotte, who has yet to appear in an AHL game during his professional career, has 15 points (4-11-15) from 45 games played with the Kings this season. Lizotte suffered a lower-body injury against Dallas on January 8, and has been out of the Kings lineup ever since.

SCOUTING THE HEAT: Stockton forward Austin Czarnik is tied for second in scoring by a Pacific Division player so far during the month of January, with 10 points (4-6-10) from 9 games played. The Michigan native has 19 points (6-13-19) from 16 games played this season, since he was assigned by Calgary. In January, goaltender Artyom Zagidulin leads the AHL in save percentage (.935) and goals against average (1.60) amongst netminders with at least 250 minutes played.