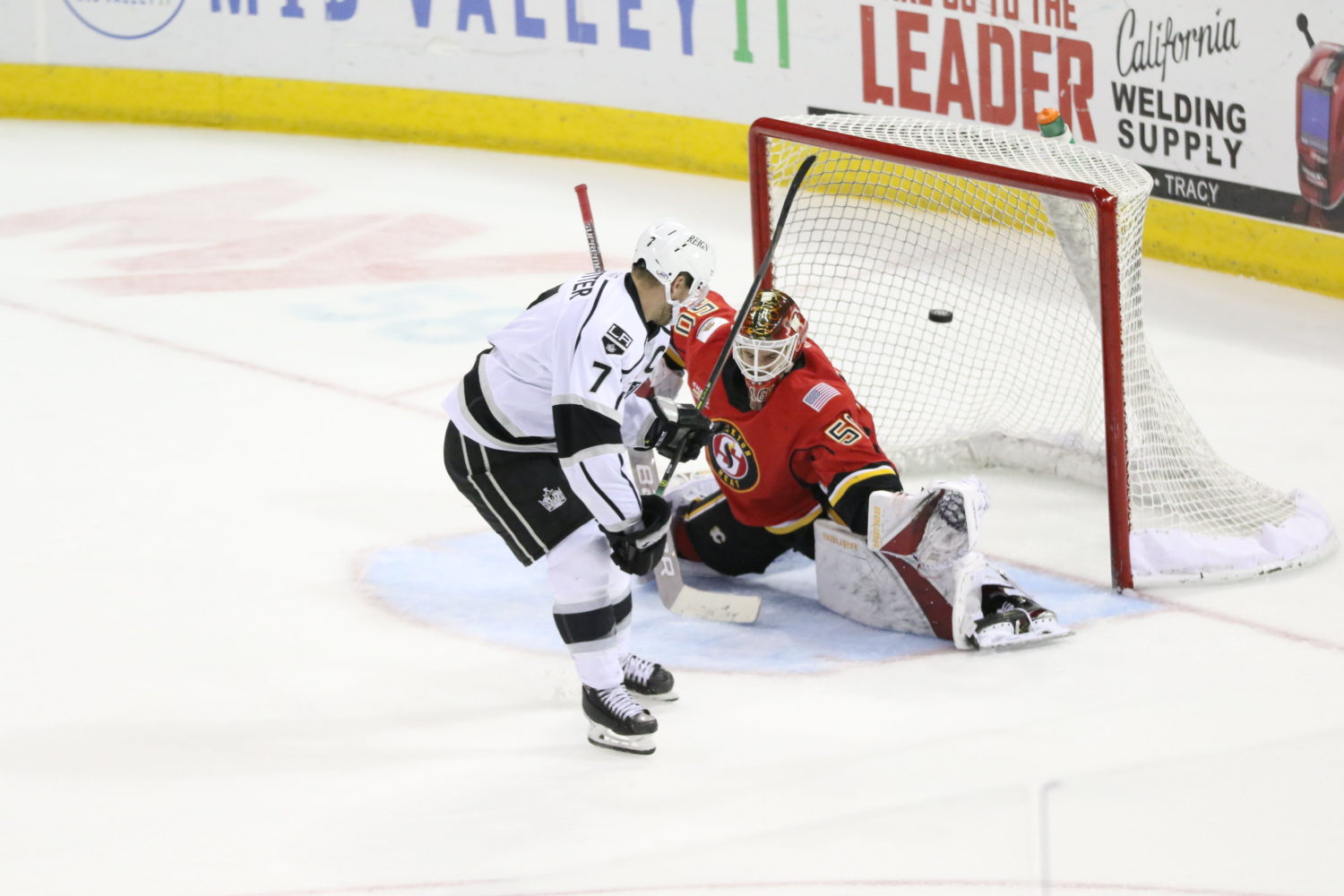 The best team in the American Hockey League in one-goal games won another on Friday evening, with a 4-3 overtime victory over the Stockton Heat. Ontario climbed back over the .500 mark on the season, with its third win in four games, following Brett Sutter’s shorthanded, overtime goal to cap off an exciting game in Stockton.

Ontario overturned 1-0 and 2-1 leads in the second period, and overcame allowing the game-tying goal with just three seconds left in regulation, to claim another victory over the Heat. With the victory, the Reign how holds a .816 winning percentage in one-goal games this season.

After Stockton opened the scoring with the only goal of the first period, forward Sheldon Rempal snapped his scoreless drought to open his account for the season with a gritty goal to tie the game at one, sparking an emotional response from his teammates. After Stockton pulled back ahead 2-1, forward Mikey Eyssimont tallied his tenth goal of the season with a shot from the slot that beat Stockton netminder Artyom Zagidulin on the blocker side, top shelf, for the tying goal.

After a back-and-forth third period, Ontario took its first lead of the evening with less than three minutes left in regulation as Matt Luff scored in his second game back with the team to put Ontario ahead 3-2. Glenn Gawdin, Stockton’s AHL All-Star representative, forced overtime as he willed the puck over the goal line from just outside the crease for his second goal of the evening.

Though Ontario took a penalty in the 3-on-3 session, it was able to secure the two points as Paul LaDue intercepted a pass in his own end and sprang Sutter the other way. The Reign captain shook the lone defender back, went to his backhand and buried a breakaway goal for the victory, with a silky-smooth move.

Ontario returns to action tomorrow evening in the final game before the AHL’s All-Star break. Puck drop is slated for 7 PM at SAP Center against the San Jose Barracuda.

Bus Texts With Stutts
ZD: Another win off of what looked like a strong performance, what did you like from the group tonight?

MS: We had some good balance, and contributions, from all four lines tonight. We had some good OZ movement with our D that gave Stockton some trouble defending. We made some big time plays at crucial times. Cal was very, very good as well!

ZD: By winning percentage, the Reign are the AHL’s best team in one-goal games. What would you attribute that to with this group, winning so many close games?

MS: Well it is impressive, and it is a good way to put a “positive spin” on the fact that we have had a few too many blow out losses, and that is disturbing. What it does tell me is that when we play within our structure, and stick to our systems we have success. When we fracture, or deviate from that structure, we are susceptible to some very long nights. Reinforce the obvious…structure, details and work ethic. Recipe for giving yourself a chance to win.

ZD: When it comes to those finer details, sometimes it takes an inexperienced group a bit to pull them together. Does it feel that, collectively, the team is starting to put those items together a bit more consistently?

MS: We are definitely making some positive strides, and our younger players are getting some valuable experience in the process. Today we were better than yesterday. Tomorrow we aim to be better than today. Patience is a virtue Dools. I learned that in religion class at St. Mikes many, many years ago. Father Zinger taught it, and for some reason I never forgot it. Unfortunately, I didn’t retain much else in high school🤷‍♂️