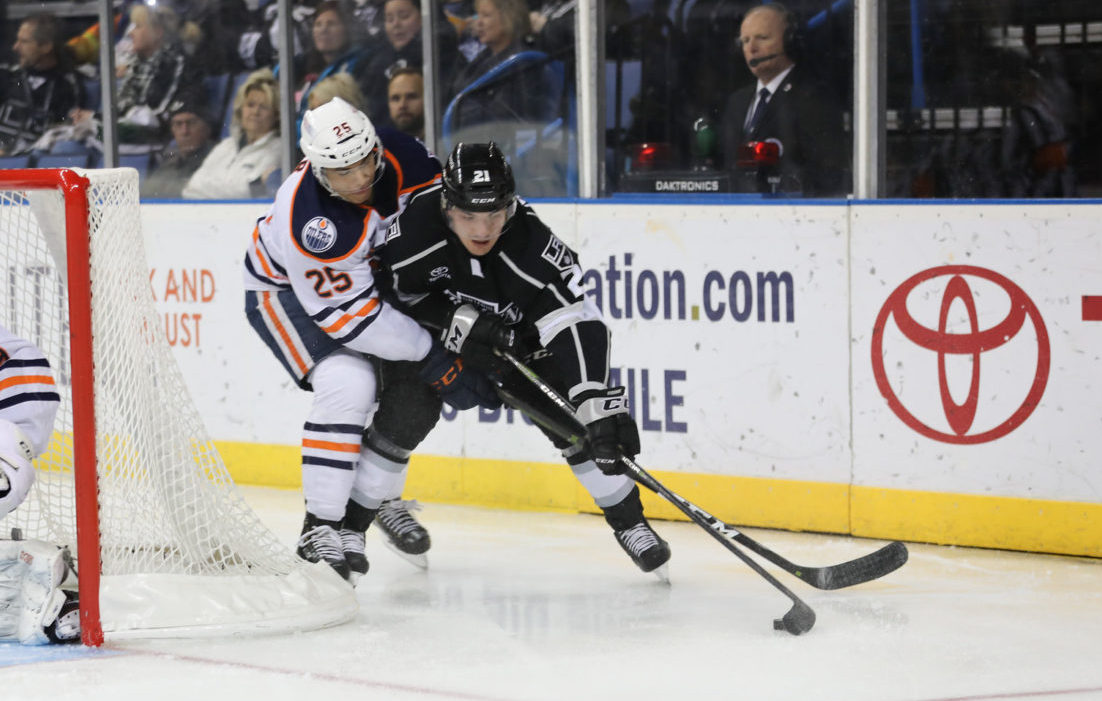 TONIGHT’S MATCHUP: The Ontario Reign conclude a three games in four days stretch this afternoon, as they host the Bakersfield Condors for an MLK Day matinee. The Reign went 1-0-1 over the weekend, most recently dropping a 2-1 overtime decision against Tucson.

HEAD-TO-HEAD: Ontario enters tonight’s action at 3-3-1 this season against the Condors, but it has yet to win on home ice (0-2-1). The Reign are led offensively by forward Mikey Eyssimont (2-3-5) and defenseman Kale Clague (1-4-5), who each have five points from six games played against Bakersfield. Goaltender Cal Petersen has played every minute against the Condors this season, and has a .922 save percentage across seven starts.

FRKST IN THE DIVISION: Reign forward Martin Frk leads all players in the Pacific Division in goals this season entering tonight’s action with 19. Frk tallied Ontario’s only goal on Saturday, a first-period tally, which extended his goal scoring streak to four games. Frk has collected at least one point in eight consecutive games at Toyota Arena, and will represent the Reign on that ice next week at the 2020 AHL All-Star Classic.

ISN’T HE LUFFLY: Ontario welcomes back forward Matt Luff to the lineup this afternoon, after he was assigned by the Kings yesterday. Luff has 10 points (3-7-10) from 15 AHL games played with the Reign this season, in addition to a goal and four assists from 17 NHL games with Los Angeles. At 0.67 points-per-game, Luff ranks second on the Reign this season, trailing only Frk (0.94) in the category.

JAR(ET)HEAD: The Reign have also added forward Jaret Anderson-Dolan back to the roster, after he was assigned along with Luff yesterday afternoon. Anderson-Dolan made his NHL season debut with the Kings on January 11 in Carolina, and skated in four games total with the big club. The 20-year-old forward leads the Reign with 14 assists this season and ranks second in overall scoring with 19 points.

MULTI-POINT MEN: Ontario defenseman Paul Ladue collected assists in both games over the weekend, with two on Friday and one on Saturday. LaDue’s multi-assist effort on Friday was his first of the season, and the fourth in his AHL career. The 27-year-old defenseman has tallied eight points (3-5-8), and a +3 rating, from 13 games played since he was assigned by Los Angeles in mid-December.

BUCKING THE TREND: Ontario’s 2-1 loss against Tucson reversed a couple of standard trends. The Reign earned a point for the first time this season when scoring just one goal (0-6-1), but also lost for the first time this season when allowing two or fewer goals (13-0-1). The Reign also surrendered a season-low for shots in a period, as the Roadrunners had just three shots on goal in the second period on Saturday.

SCOUTING THE CONDORS: Bakersfield forward Josh Currie (4-3-7) and defenseman Evan Bouchard (2-5-7) lead their team with a point-per-game against the Reign in head-to-head play. Overall this season, forward Tyler Benson leads the Condors with 24 assists and 32 points, while Currie leads the way with 15 goals. Bakersfield has struggled to find consistent goaltending, with the AHL’s third lowest cumulative save percentage (.881) this season.