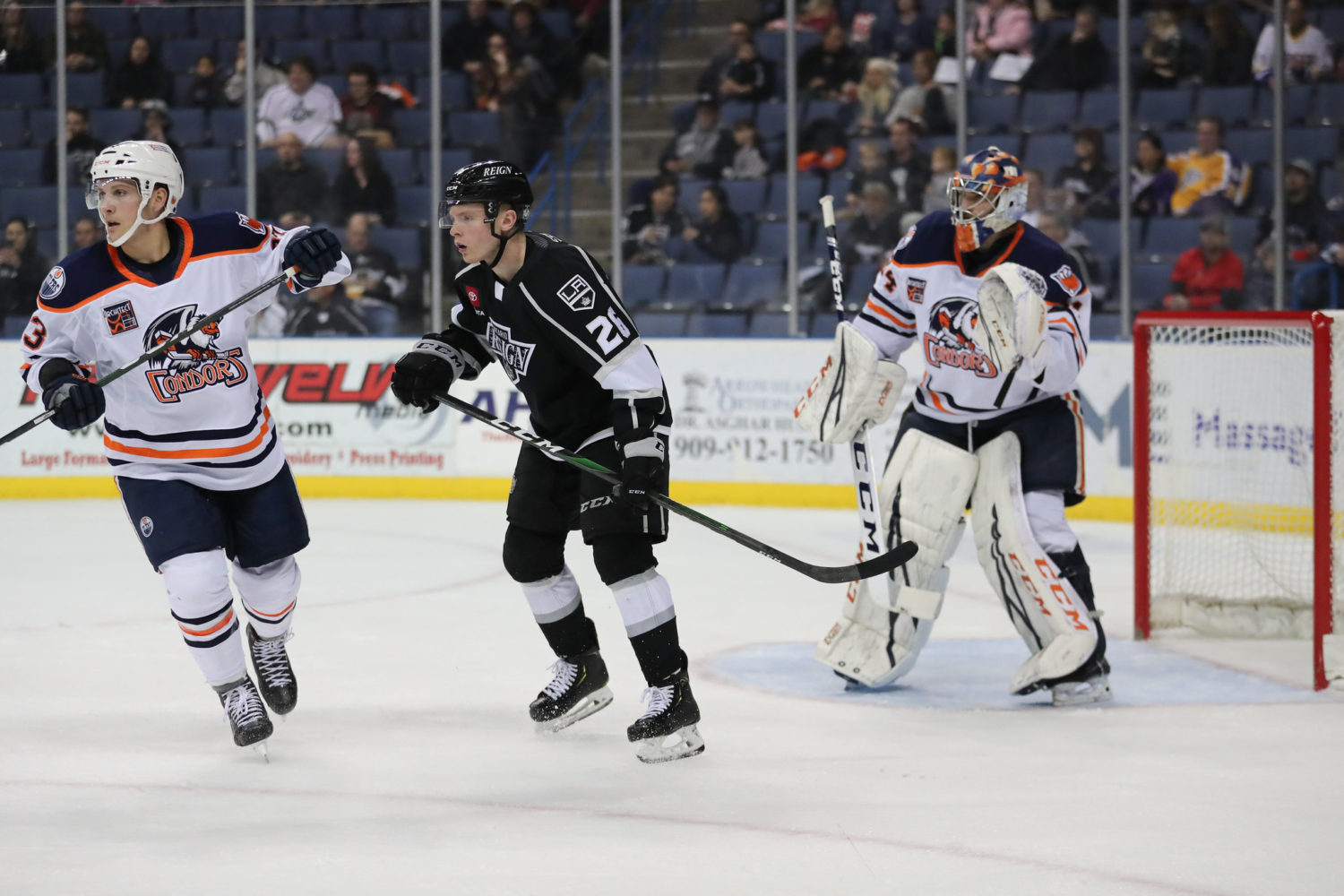 It was Monday Funday for the Ontario Reign, who skated to a 3-0 victory over the Bakersfield Condors in a massive divisional win. Ontario widened its gap over both Bakersfield and idle San Diego for the final postseason berth in the Pacific Division. Cal Petersen led the way, as he stopped all 33 shots Bakersfield threw his way, while Ontario got goals from Martin Frk, Jaret Anderson-Dolan and Carl Grundstrom in the victory.

Petersen was the story tonight, as he was on Friday, as he posted his third shutout of the season. Aside from the play of their goaltender, special teams was a pertinent factor, as Ontario scored all three of its goals on the power play and went a perfect 4-of-4 on the penalty kill against a dangerous Bakersfield unit.

The Reign move three points clear of San Diego, and four points clear of Bakersfield in the standings, though the latter two each have games in hand. With the congested standings, and only divisional games remaining for the Reign, every point down the stretch will be important. With five of six earned this weekend, it was certainly a strong step in the right direction for Ontario.

Mike Stothers on tonight’s “obscure” 12-6 alignment, and having Luff and Anderson-Dolan back in the lineup
Well, see we have had that lineup but you wouldn’t know because you were up with the Kings for 2-3 weeks. Anyway, we did [11-7] Friday and Saturday and then we got some reinforcements with Luff and JAD coming down. It’s still an awkward position when you’ve got nine healthy D to try and get them all playing and stay busy, but it certainly added some better balance to our lines up front, having Luffer and JAD back. I think the results were evident.

On holding their cool in a chippy, emotional game, and scoring three PPG’s
Well, that’s part of the way of making a team pay is capitalizing on the power plays. It’s really hard to play the game anymore any other way within the rules. The days of the Broad Street Bullies are long behind us, cherished memories for most of us, fond memories for a lot of us, but the game’s not played that way anymore. How do you want to hurt somebody, if they want to take a penalty, then you’ve got to score on your power play. Our guys did that tonight, which was good, and it was a good solid effort from everybody and, again, I think our best player tonight was Cal.

On the chances the PP had generated this weekend, without scoring, and things coming together tonight
It’s a funny game. Last time we played these guys [in Bakersfield], it was eight games ago and we scored two power-play goals that game against them and then we kind of went into a little funk and today they went into the net. It’s much the same as last week, we couldn’t buy a win and this week we get five out of six points. It’s the emotional roller coaster of the game of hockey. You try not to get too pumped up when things are going well, you try not to get too discouraged when things aren’t going your way. Sooner or later, it’s going to change and that’s the thing that’s part of the process that these guys have to learn as players. There’s going to be good times, there’s going to be lean times and flat out there’s going to be tough times. We stick together and we’ll get through it.