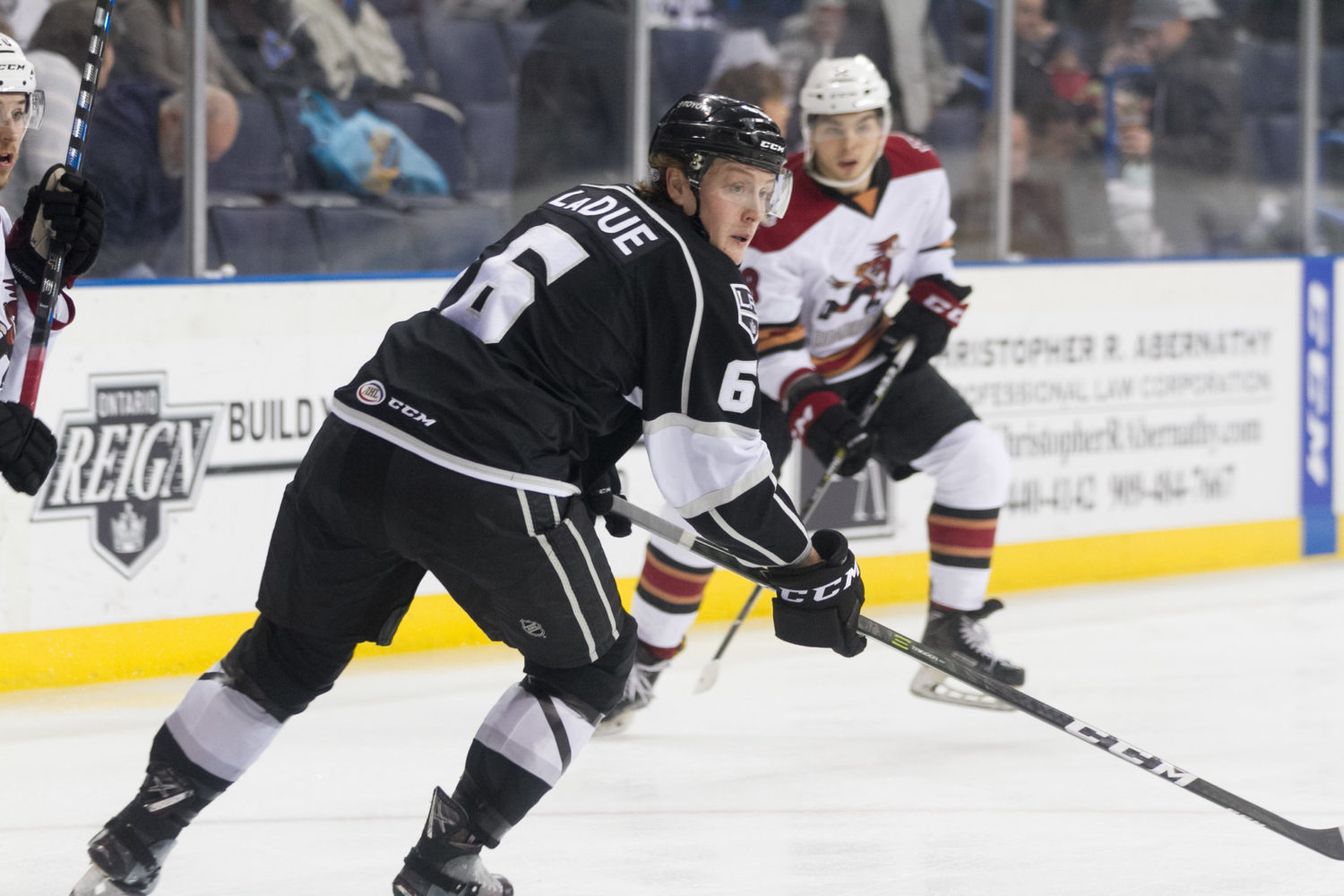 TONIGHT’S MATCHUP: The Ontario Reign continue their three games in four days stretch with the Tucson Roadrunners in town tonight for a Saturday evening showdown. Ontario won Game 1 on the weekend, with a 5-1 victory yesterday evening over Stockton.

WHAT TO WATCH FOR: The Ontario Reign held just a partial skate this morning, so the lineup for tonight won’t be known until closer to tonight’s action. Expect goaltender Matthew Villalta in net tonight for the Reign, after Cal Petersen’s workhorse performance yesterday against Stockton. As per Mike Stothers post-game press comments yesterday, expect some rotation amongst the defense, with Austin Strand and Chaz Reddekopp likely to check in tonight.

50 SHADES OF SAVE: Ontario netminder Cal Petersen made a season-high 50 saves last night against Stockton. Petersen stopped 50 of the 51 pucks thrown his way and was two saves shy of matching his AHL career-high for saves in a game. Petersen has made 50+ saves three times in his AHL career, including a pair of 52-save efforts last season against the San Jose Barracuda (2/10 & 3/1).

DOUBLE YOUR PLEASURE: Reign forward Martin Frk scored twice in yesterday evening’s victory, as he tallied his team-leading 17th and 18th goals of the season in the win over the Heat. Frk’s two tallies moved him into a tie for seventh in the AHL in goals scored this season, and the 26-year-old winger leads all players in the Pacific Division in goals scored. The multi-goal game was the 13th of Frk’s AHL career, and his second of the 2019-20 season.

MULTI-POINT MEN: Ontario got multiple points from Mikey Anderson (0-2-2), Carl Grundstrom (0-2-2) and Paul LaDue (0-2-2) yesterday evening. For Anderson, the multi-point game was the second of his AHL career, while LaDue’s was his first of the 2019-20 AHL season. Grundstrom has now tallied two assists four times in his AHL career, and his multi-point effort was his first since October 26 against San Diego.

BRICK BY BRICK: The Reign welcomed back defenseman Daniel Brickley to the lineup yesterday evening for the first time since October 5. Brickley had missed Ontario’s 36 games with an undisclosed ailment. Brickley was a +2 in his return to the Reign, skating as one of seven defensemen, and Ontario is now 3-0-0 this season with Brickley in the lineup. Per Mike Stothers, Brickley is not expected to play in tonight’s game, as a part of a pre-determined plan.

TACKLING TUCSON: While Ontario has yet to record a victory against Tucson this season, entering tonight’s action at 0-5-0 against the Roadrunners, forward Sheldon Rempal has led all Reign skaters with four assists from the five games played against Tucson. With two goals, Frk is the lone Reign skater to score twice against the Roadrunners this season and forward Johan Sodergran scored his first career AHL goal, in Tucson in November.

SPECIAL STATS: Ontario faced off against the AHL’s most potent power-play unit last night against Stockton, and went 4-of-4 on the penalty kill in the 5-1 victory. The Reign face off against a middle-of-the-pack unit in Tucson tonight (18.9%, 14th in the AHL), but Tucson has converted at a 33.3% clip (11-of-33) in five games against the Reign this season. Overall this season, Ontario is the lowest-ranked penalty kill unit on home ice at 74%.

SCOUTING THE ROADRUNNERS: The Roadrunners are led offensively this season by a trio of forwards – Lane Pederson, Brayden Burke and Michael Bunting. Bunting leads all Tucson skaters with 36 points this season, and his 31 assists are tied for the most in the entire American Hockey League. Pedersen (16-18-34) and Burke (16-18-34) each have 34 points on the season, and were both selected as 2020 AHL All-Stars.