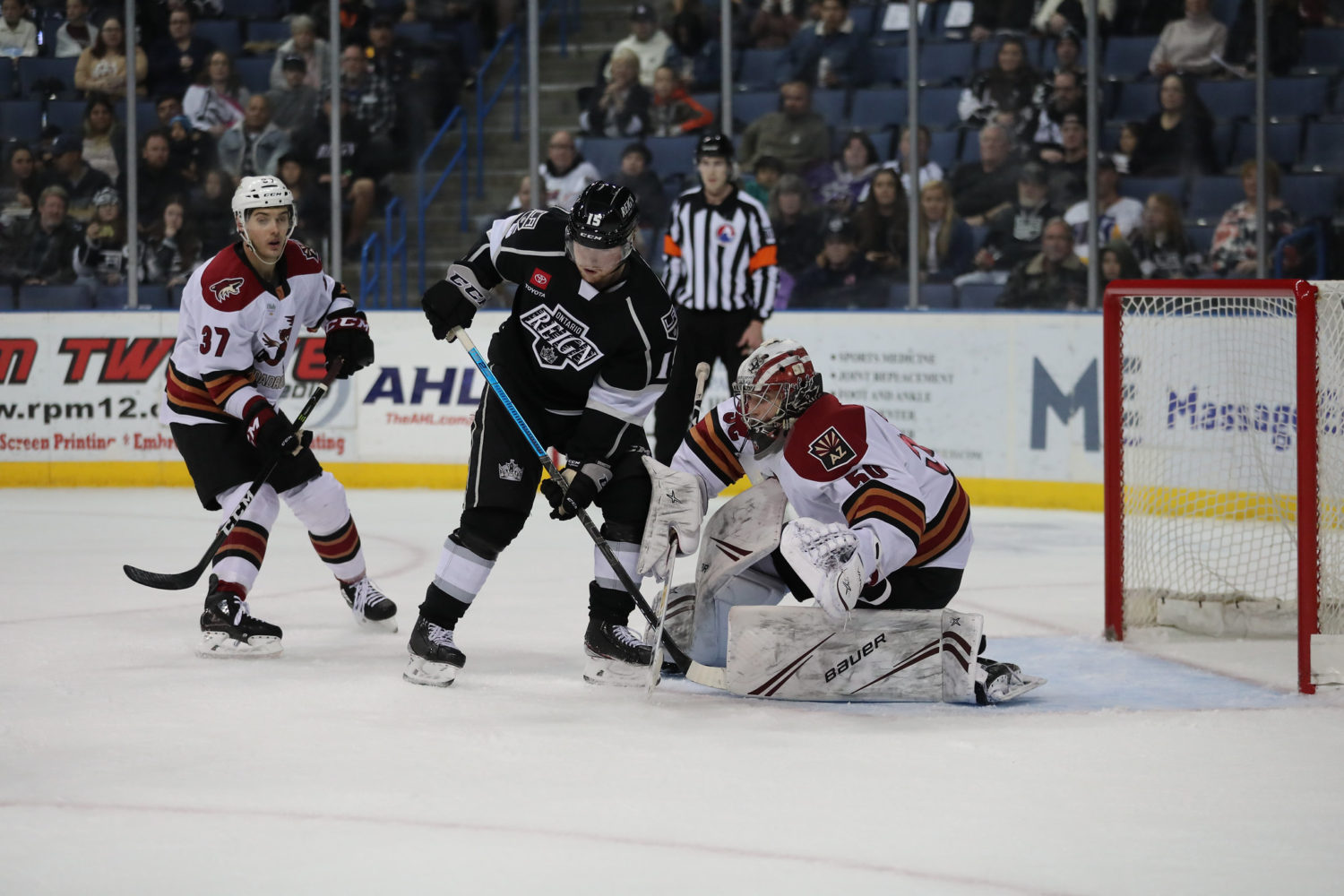 The Ontario Reign forced overtime and earned a point, but fell 2-1 against the Pacific Division’s top team, the Tucson Roadrunners, on Saturday evening at Toyota Arena. Ontario got a first-period tally from forward Martin Frk and 24 saves from Matthew Villalta, as the Reign collected a hard-fought point, a point that on other nights this season they would not have earned, and that’s a testament to what was a stronger team performance.

Tonight felt like the Reign were much improved in terms of shot suppression and shot blocking. You could point to any number of blocks – a pair by Ryan Stanton and Mikey Anderson in the second period stand out, and a Tobias Bjornfot block in the third period, on the penalty kill, does as well.

Offensively, the Reign created chances and had a large chunk of puck possession in the o-zone, but lacked that final touch to turn opportunities into goals. Ontario’s lone goal was a good individual effort from both Paul LaDue, who gained entrance into the zone and Johan Sodergran, who took LaDue’s feed, got it onto his forehand, and hit Frk’s across the crease for the tally. Overall, the Reign were the better team at 5-on-5, but just couldn’t find a way to get that second goal.

The Reign now have three of four points on the weekend, with perhaps the most important game of the three looming on Monday. Ontario hosts Bakersfield, the team it currently leads by just two points for the final postseason berth in the Pacific Division. Puck drops on Martin Luther King Day at 3 PM.

Johan Sodergran on his line tonight with Mason Bergh and Martin Frk
I mean, they’re very good, they’re very creative in the offensive zone, and that makes it easier for me. It just creates some room for me and we got some shots on net and created scoring chances.

On his assist to Frk and what he saw on that play
It went very fast, but I just saw Frky on the left side and he was screaming for the puck, so I just passed it to him and it a pretty good shot by him too. It was nice.

On where he feels he’s made the biggest strides in his game this season
I think it’s that I’ve been better in all three zones and I just keep working on the d-zone too, it’s a little bit different there. Every time, to move the puck North, that’s probably the biggest difference, so that’s something I’m working on.

On the team playing with more consistency this weekend
We’ve been better at that since we started the season. We could have lost a game and then we win, but I think now we’re trying to play better and keep the consistency up. It’s pretty nice.

Mike Stothers on whether tonight felt like a hard-fought point, or a disappointed point lost
A little of both. I mean, obviously you get selfish and you want to win the game and beat them, but I think the fact that we played well again, two nights in a row, did a lot of good things, we’ve got to be happy getting a point.

On the team’s shot suppression and shot blocking tonight
Well, we didn’t give up 50 shots, so that was good, so we must’ve been doing something better, or something right. We blocked a lot of shots, which is good, that’s what you’ve got to do, that’s what successful teams do. Sacrificing for your team and making sure that pucks aren’t getting through to your net.

On Martin Frk’s ability to make players around him better and him being more than just a goalscorer
He plays with a lot of passion, he plays with a lot of energy. He led our team in hits tonight too, so you’re right, he’s way more than just a goalscorer. He competes and it’s infectious on everybody else. You can see the guy loves to play, he just loves being around the rink, he loves being on the ice and he’s pretty darn skilled. He’s more than just a shooter, he can make plays, he makes things happen and that’s what a guy that’s got a few years of experience should be doing, he’s supposed to make the players around him better.

On playing only divisional games from here on out, in a tight playoff race
Well ideally, you’d like to have a winning record against those teams head-to-head. You’ve just got to find a way to get points, we’ve just got to keep finding ways to generate points. We just lost a tough point tonight against Tucson, but we gained a point and at most, we lost one point. We’ll look at it, we’ll have a good practice tomorrow and we’ll look at it for Monday and get ready for Bakersfield, but yeah, there’s no room. It’s too tight.