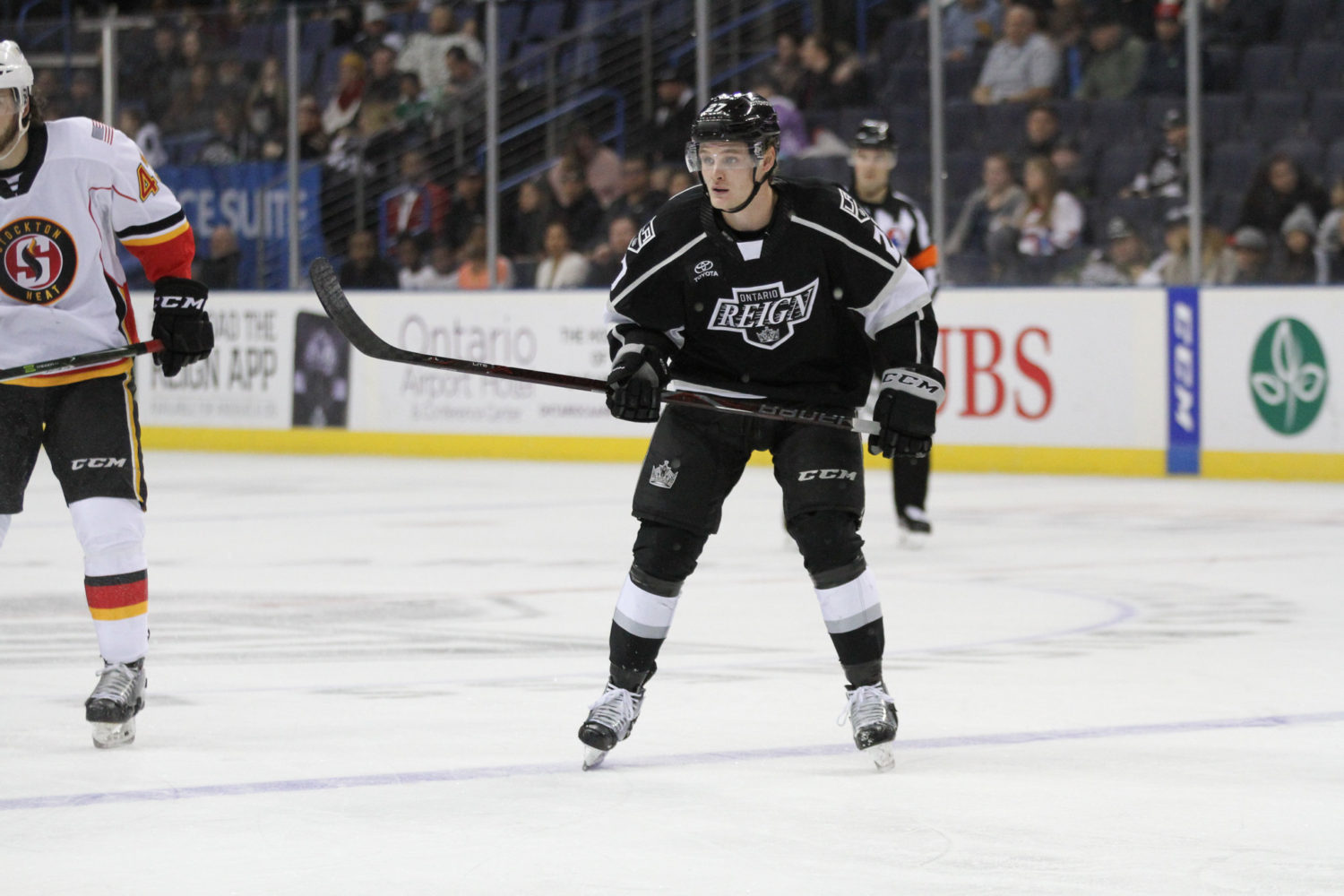 TONIGHT’S MATCHUP: The Ontario Reign are back in to begin a stead of three games in four days, all at home, as they host the Stockton Heat this evening. The Reign have lost three straight entering tonight’s action, most recently a 6-1 defeat in San Diego on Saturday.

WHAT TO WATCH FOR: On late this morning was the group of Jacob Doty, Austin Strand, Chaz Reddekopp and Matthew Villalta, which points to goaltender Cal Petersen back in net for the Reign. Tonight’s lineup still has a couple of question marks, including whether or not Ontario will go with a 12-6 alignment, or return to the 11-7 look the team utilized last weekend. Defenseman Daniel Brickley, who has not played since Opening Weekend, is healthy and could make his return to the Ontario lineup tonight.

HEAD-TO-HEAD: A trio of active forwards – Martin Frk, Mikey Eyssimont and Gabriel Vilardi – lead the Reign this season with two goals scored against the Heat, with Frk and Eyssimont tied for the active team lead with four points apiece. Forward Jaret Anderson-Dolan, now with the LA Kings, leads all Ontario skaters with five points (2-3-5) against Stockton, while goaltender Matthew Villalta is 1-1-0, with a .918 save percentage and a 2.40 goals against average.

FOR THE FRKST TIME: Forward Martin Frk scored in both games over the weekend for Ontario, including the team’s first penalty-shot goal of the season on Saturday in San Diego. Frk’s goal on Friday against Bakersfield extended his home scoring streak to seven games entering tonight’s action, and the 26-year-old forward factored into three of Ontario’s four goals on the weekend. The 2020 AHL All-Star leads all Reign players with 16 goals and 26 points this season.

BLACK EYSS: Ontario forward Mikey Eyssimont found the back of the net on Friday against Bakersfield, and now has seven points (4-3-7) over his last seven games played. With nine goals on the season, Eyssimont ranks second on the Reign, and his 18 points rank second amongst active Ontario players. The second-year forward also has points in four of five games played against Stockton this season.

GRIFFEN-DOR: Ontario signed forward Griffen Molino to a PTO. Molino joins the Reign from the ECHL’s Utah Grizzlies, and was tied for seventh the ECHL with 42 points (15-27=42), and tied for sixth in assists, as of yesterday evening. The Trenton, MI native appeared in five NHL games with the Vancouver Canucks during the 2016-17 season, and has 14 points (4-10=14) from 83 career AHL games with Utica, Toronto and Colorado.

PROFESSIONAL KILLERS: Stockton enters tonight’s game at 87.3% on the penalty kill this season, which is the top mark in the Pacific Division and the Western Conference, and the second best mark in the AHL. At 84.9% on the road, the Heat also carry the top mark on the penalty kill in both the division and conference, and with just 20 power-play goals allowed, Stockton is tied for the second fewest PPG’s against across the AHL.

SCOUTING THE HEAT: Since November 15, no player in the Pacific Division has scored more goals than Luke Philp’s 13, and the Heat forward has 20 points (13-7-20) over that 22-game span. In net, goaltender Artyom Zagidulin posted his second career AHL shutout, with 26 saves on January 11 against San Jose, and the Russian goaltender stopped 53 of the 54 shots he faced in two games versus the Barracuda on the weekend.