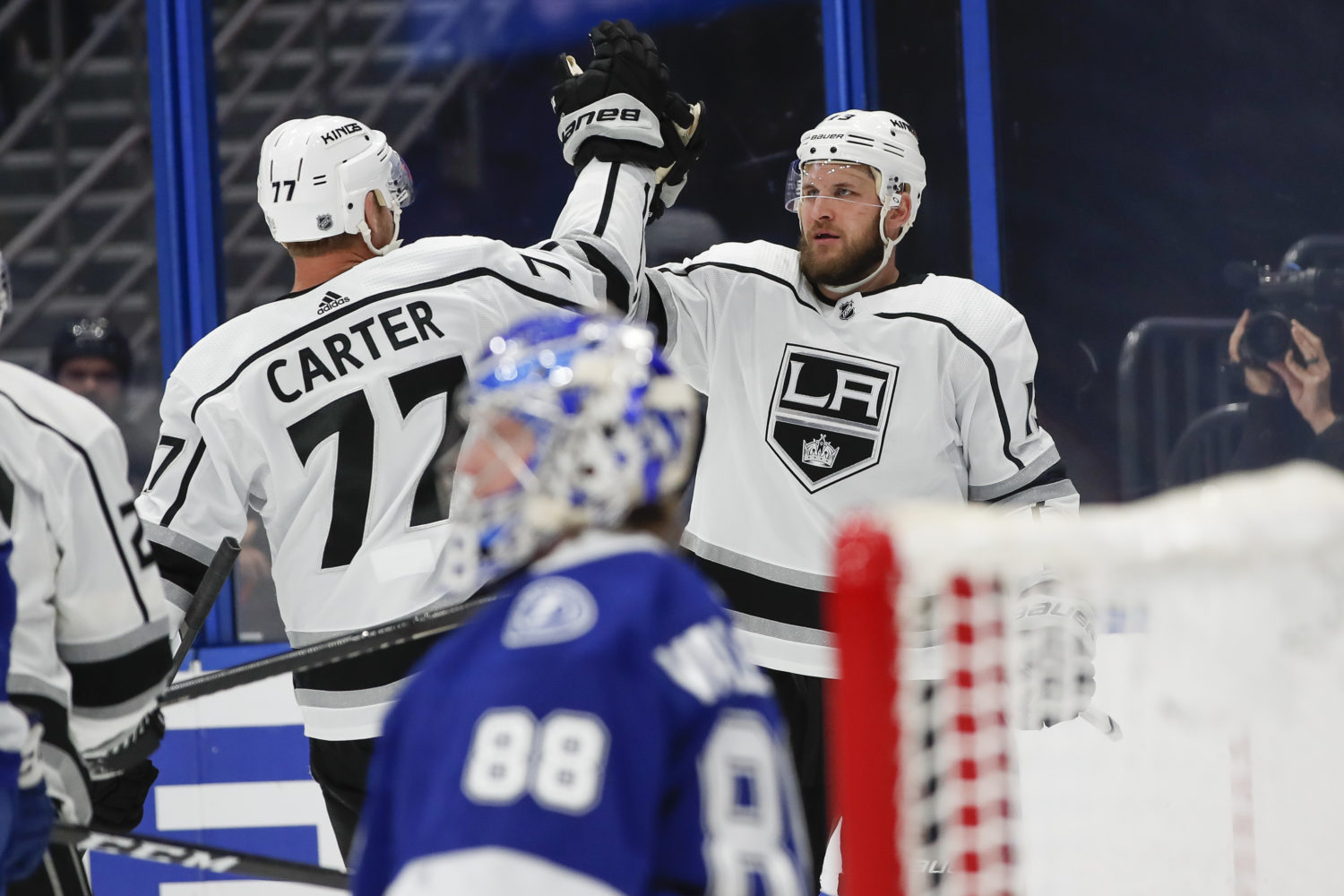 A game preview will follow, but first, some Thursday morning musings from Todd McLellan, whose LA Kings will have their hands full with an up-tempo and offensively capable team in the Florida Panthers tonight (4:00 p.m. PT / FOX Sports West / FOX Sports GO / LA Kings Audio Network):

Todd McLellan, on factors behind the goals-against rate stabilizing:
I think there are a lot of things that go into that number, and to get it to 16, there’s been a lot of work because we were leaking a lot of goals against quite often at the beginning of the year. One is understanding just how the structure and the systems to be played and what your responsibilities are, and it was a dramatic change for a lot of players here, starting with the goaltenders, back end and forwards. So, goaltending’s been much better. Penalty kill’s improved immensely. The number won’t show it that much, but we struggled that much early in the year. All those areas have allowed us to bring our goals against down. Obviously, we have trouble scoring, so we’re going to need that tonight, tomorrow and the rest of the way through.

McLellan, on the Clifford-Carter-Brown line:
Brownie’s just coming back – not ‘just coming back,’ but he’s just getting active now in his game with the pneumonia. It’s hard to do that. When you haven’t skated for 10 days, to come and play at the pace of games that we’ve been at, we just thought we’d need a little more corner work, a little more physicality there. Not a real, real good night in Carolina, but a pretty good night in Tampa the other night. They were involved in the scoresheet offensively, a lot of turnovers in the offensive zone that they created, pretty solid defensively, and Cliffy’s a player in my mind that can go all over the lineup sheet. He’s comfortable playing the fourth-line role, he understands that well, but when you bump him up, he usually gives you a pretty good night. So, credit to him and that line and let’s hope we get more of that tonight.

McLellan, on Kyle Clifford:
You know what’s interesting, he had a birthday a couple days ago, and I thought he was like 36. He’s been around for so long, and he’s still in his 20’s. He’s played that may big games and important games. A straight-line player, honest player, hard, takes care of teammates. Added some offense to his game that I didn’t think was there, but it just goes to show that young old dogs – I guess we’ll qualify him as – can learn new tricks, and he’s been a real effective guy. We’re lucky to have him.

McLellan, on what Nikolai Prokhorkin can demonstrate to continue to earn power play time:
Skill. Skill, good shot, poised with the puck, some confidence now. As his NHL career evolves, with the type of talent he has, he has to make that happen and make that go. It might be what’s considered the ‘second unit’ – I don’t know on any given night – but he’s an important player there and obviously set up Brownie for a really big goal in Tampa, and we need more of that from him as well.

McLellan, on being the third-longest tenured Pacific Division coach:
I believe, and I could be wrong, from the time that Washington won the Stanley Cup, the next day ‘til present, I think 20 teams have changed their coaching staff, and if you go back and look at the Stanley Cup participants from the last three Stanley Cups, I think there are six or seven teams that have changed their coaches. They’ve been in the Stanley Cup or won it. So it’s an interesting time in the National League, it’s an interesting time for coaches. You guys asked me a number of times already – why all the changes? I don’t have the answers to that. We just keep showing up and doing what we can do and do it as well as we can, and hopefully that gets the job done.

McLellan, on what the team will have to be aware of when facing Florida:
Well, a very offensive team. I look at their 110 goals, five-on-five, a real solid power play. When they’re clicking, they obviously can score and it’s not one or two lines, it’s almost four lines deep. Especially when they play a defenseman up front, they can slide a goal-scoring forward in there with Boyle and Sceviour sometimes and it makes it quite deep, so we’ll be aware of that. But when we play these types of games, we focus a lot more on our group. We know they have tendencies and we know they have really good players, but right now, with the situation we’re in, we really focus on our group. When we’re at home and we play San Jose-Anaheim, we know a lot more about them and play them a lot more and we’d be a little more [focused on their] tendencies. That’s not to say we won’t prepare our guys, but it’ll be a lot more about us than them.