Waking up with the Kings: January 15 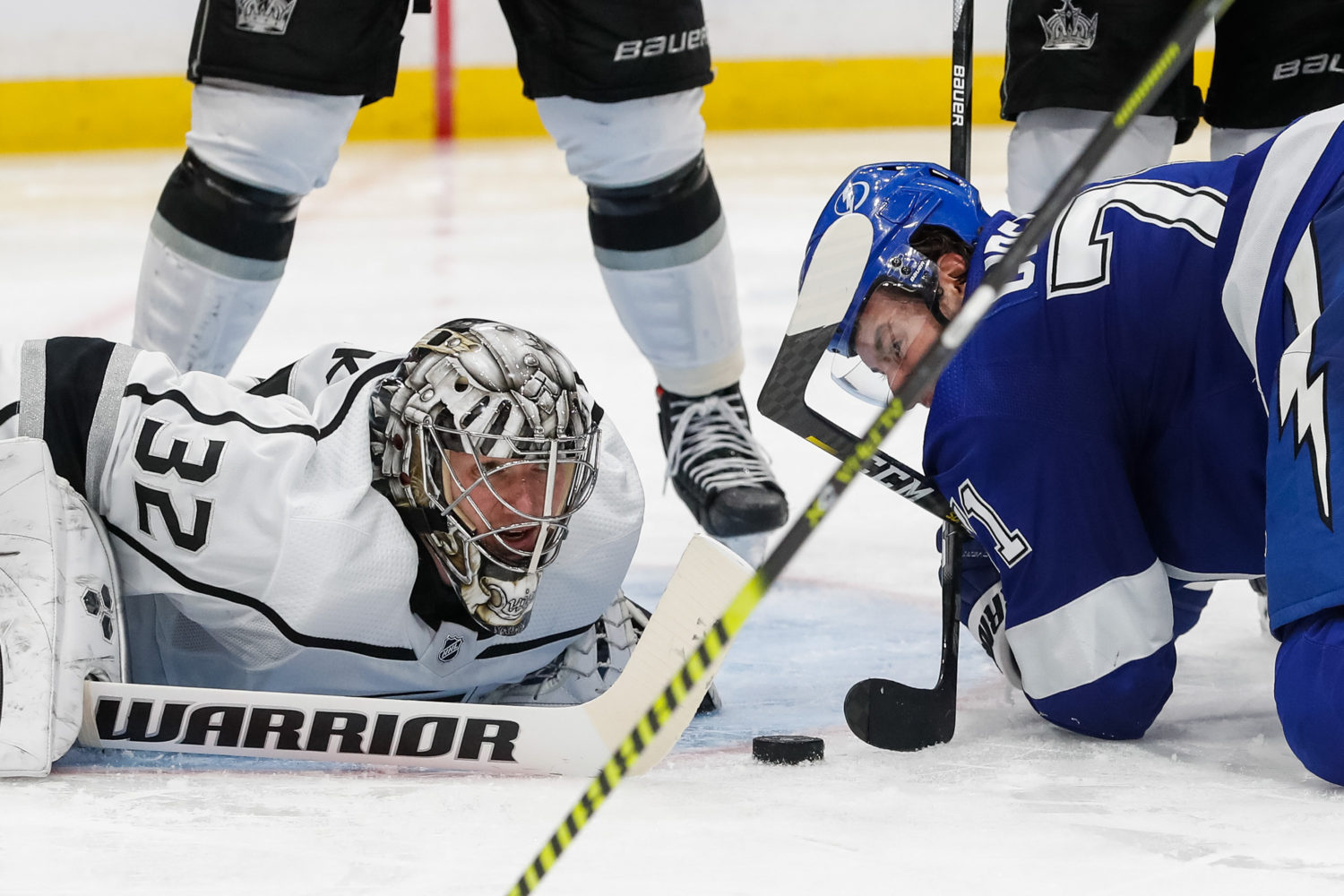 “I think somebody mentioned that we always seem to be in a shootout here,” Dustin Brown said after the third kick in the pants in as many years in Tampa Bay. The last two, in which the LA Kings held third period leads, were punctuated by knife-twisting late details. This year, Anthony Cirelli made an absolutely terrific play on a faceoff in which Jeff Carter smothered him, issuing an off-hand backhanded pass directly into the radius of Nikita Kucherov as if it was a one-timer. That’s a tremendous puck laid out with precision in which one flutter on soft ice or one tangential centimeter of trajectory towards Kucherov’s wheelhouse affects his ability to hammer it past Jonathan Quick to tie the game. But Cirelli, a 22-year-old center with 29 points in 45 games, is shaping up to be a very good player, and he made a very good play against another center who threw his full weight into physically contesting the draw. Lots of people doing what they’re supposed to do there. But for the second straight season, and for the third standout performance in a row in the eye of the storm, the LA Kings had the Bolts down to their final strike. Last year, Kucherov extended the shootout on Jack Campbell; this year, Adrian Kempe, who entered the shootout 3-for-9 in his career and generally instills confidence, just couldn’t issue the final dagger. “In retrospect, I forgot how long his legs were,” Brown said after Vasilevskiy denied his final attempt to cement the Lightning’s fifth straight home win in the series, a streak sustained by three shootout victories. 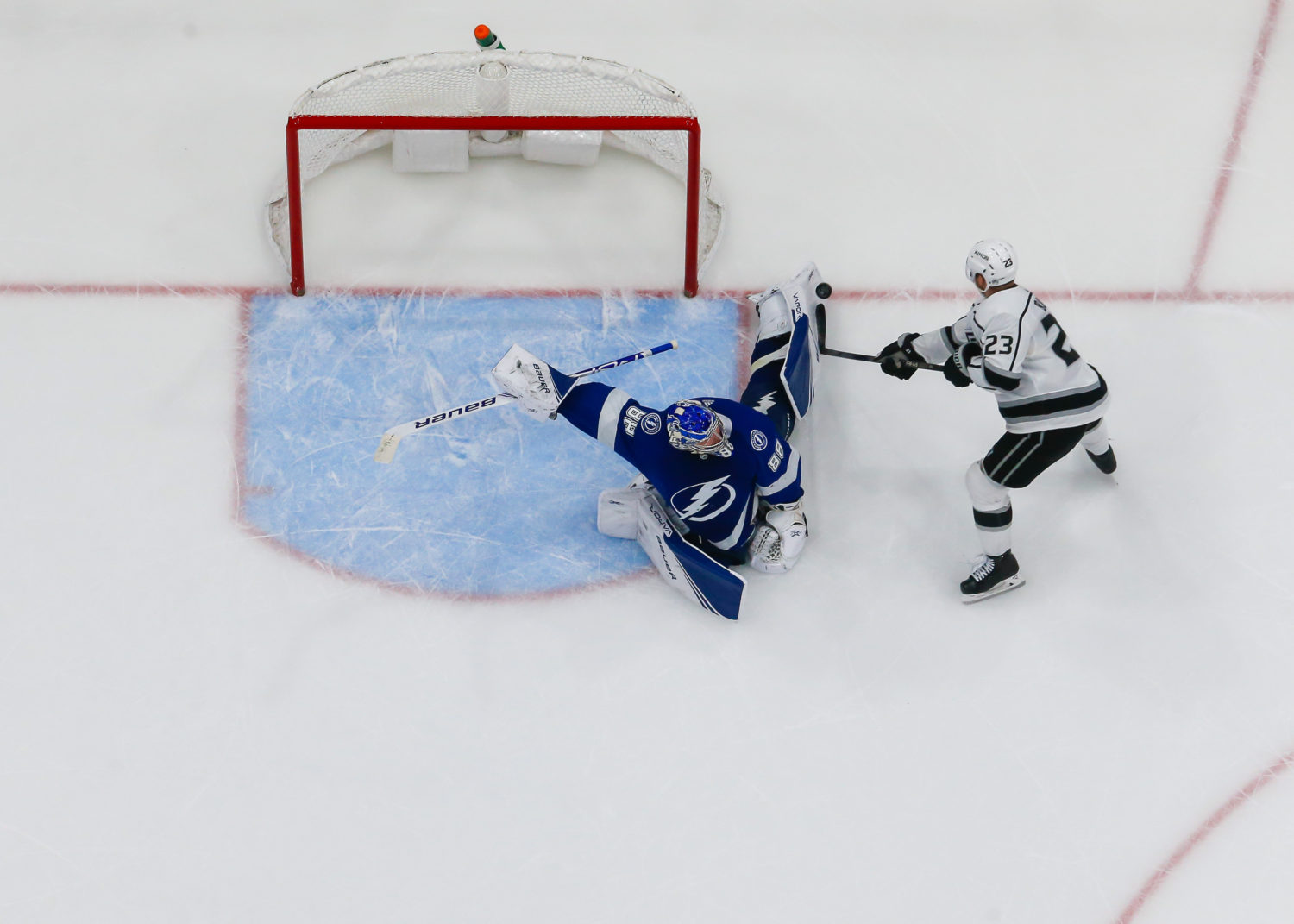 Dustin Brown played his best game since returning from a debilitating bout with pneumonia, which was followed earlier this road trip with a head cold that he’s since recovered from. It’s good to hear he’s healthy and coming along after his body started to wear down while in Columbus on the prior road trip. After a scary bout of illness that necessitated a Christmas Day emergency room visit and zapped him of both energy and therapeutic holiday recovery time, Tuesday’s game represented an important step forward in strength and performance. He was playing his familiar hard game low in the offensive zone, taking away Vasilevskiy’s eyes on Kyle Clifford’s goal and getting the heel of his stick on a high-velocity Nikolai Prokhorkin wrister from the point while on the power play. Stick taps to Todd McLellan and the coaching staff for keeping the four-forward power play unit on the ice for a faceoff with 20 seconds remaining. You’ll sometimes see coaches resort to rolling lines at that point in the game, but Carter (with the help of Michael Amadio) won the faceoff, and all L.A. skaters touched the puck in those six seconds it took to deposit it in the back of the net. Speaking of Prokhorkin, he managed to create his own NO NO NO NO NO NO NO NO YES moment on an earlier power play with some impressive (if perhaps dicey) puck control. He’s parlayed his impressive skill and a more responsible package into a slightly wider role that’s now encompassing some additional power play time. Stationed at the point, he’ll continue to earn minutes with the type of puckhandling proficiency demonstrated Tuesday. 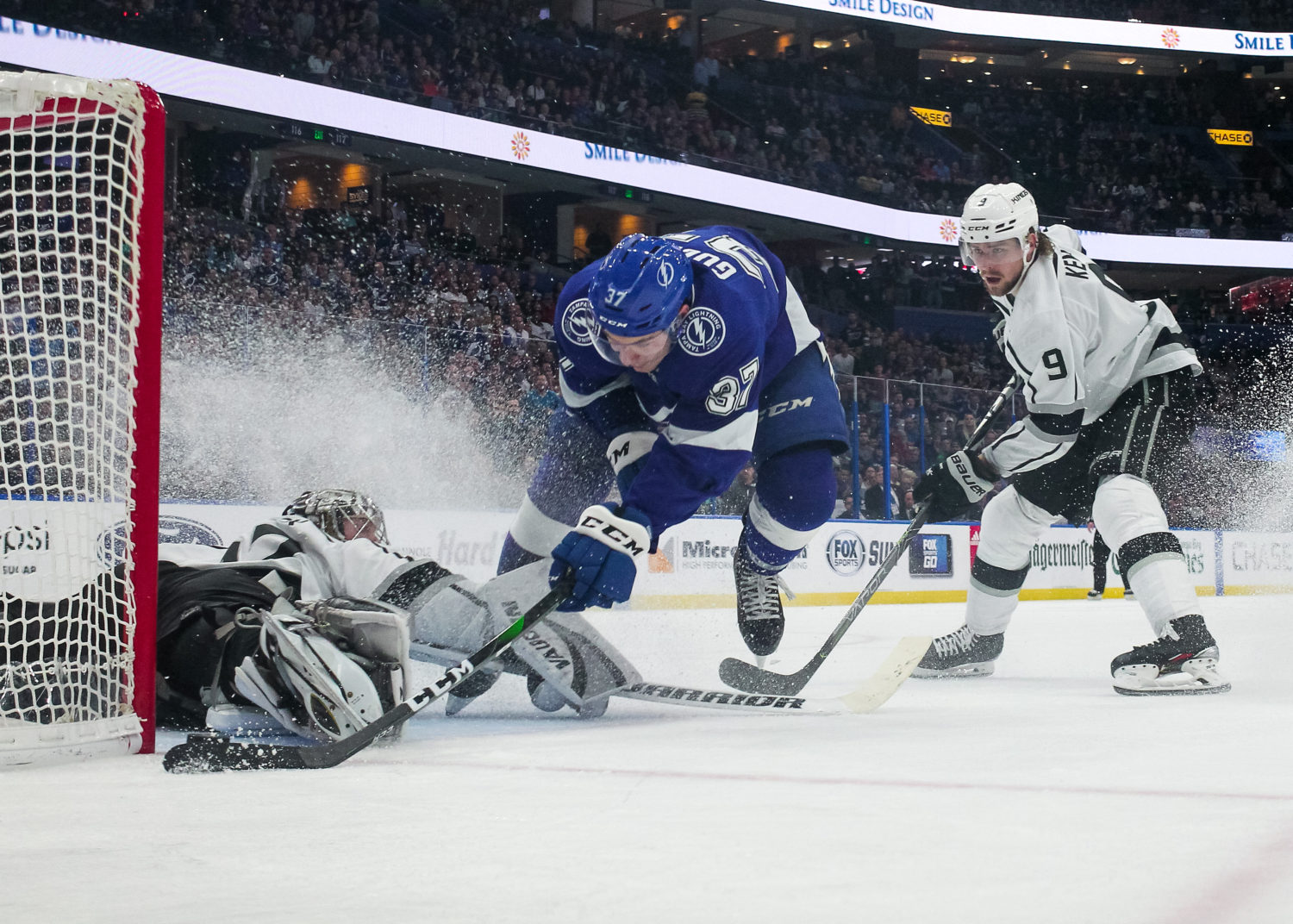 Don’t read much more into this than the speculation than it is. But you should probably pay a little bit of attention to some of the high-skill and medium-to-high-profile young Tampa forwards. I mean, we’ve profiled dozens of draft prospects that never ended up playing for L.A., so why not consider the types of assets that L.A. will make calls on? Clearly, the Lightning are looking to add and may be more aggressive this year in doing so. They are in the phase of their competitive arc that would qualify them as potentially entering a market for Kings who’ve reported and presumed to be available via trade. What many of us had heard, read and surmised was that Tampa Bay would be interested in some the type of firmness that has led to success in the playoffs; their acquisition of Pat Maroon before the season was along those lines. Last year, I’d wondered if they were among the teams interested in Kyle Clifford, whom the Kings are in no desire to move, have not lengthily entertained moving in the past, and theoretically would command a return that takes into account the prime reasons why a team like Tampa Bay would value him. Clifford had a goal, an assist and a penalty drawn Tuesday night. But regardless of where the Lightning will look to tinker with their roster – they’re also going to be inclined to add some scoring – they’ll also be placing value on the type of firm championship intangibles a number of L.A. skaters have in place. As for their own talent, guys like Cirelli (1997-born) and probably even Mitchell Stephens (1997) are too prominent and valuable to exchange, and don’t even think about Mikhail Sergachev (1998) or Erik Cernak (1997). But there are other interesting 1997-born prospects, such as Alexander Volkov, who made a nice inside move on Drew Doughty before dropping the puck to Alex Killorn to earn his first career assist, and at the AHL-Syracuse level, guys like Cal Foote (1998) and Alex Barre-Boulet (1997), the latter of whom attended a training camp with L.A. and leads the Crunch in scoring. Tampa has done an impressive job of maintaining a strong prospect pool and incorporating players onto its NHL roster even at their competitive zenith. Again, take this for nothing more than the speculation that it is, but the yin and yang of organizational needs have the potential to link Rob Blake and Julien BriseBois by phone through the trade deadline. 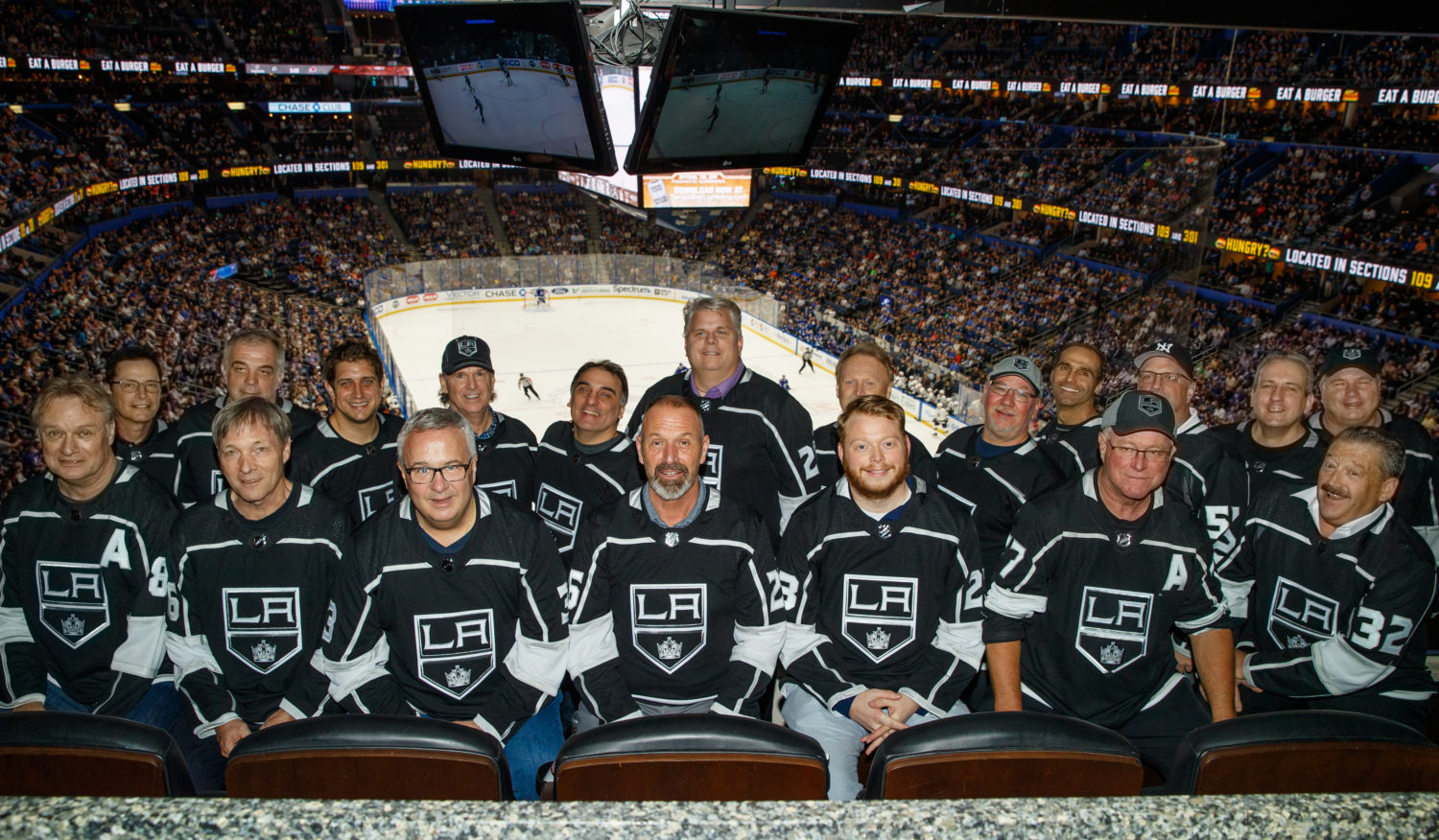