A “matter of time” before Anderson-Dolan got the call; Brind’Amour audio 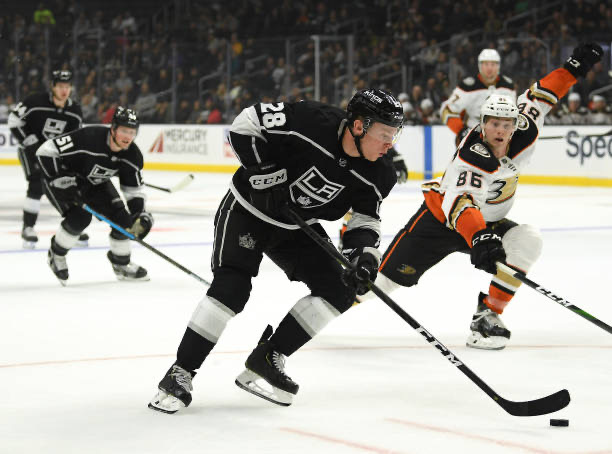 Jaret Anderson-Dolan hasn’t played in the NHL for over a year, though much of what you recall greatly applies. His maturity and Hockey IQ mesh well with his motor, ensuring that it was only a “matter of time” before he was recalled this season. “He’s a solid pro even though he’s only 20 years old,” LA Kings Director of Player Personnel Nelsom Emerson said.

For the last six weeks, Anderson-Dolan forced the Kings’ hand. He’s netted a goal and 10 points in his last 15 games in Ontario, drawing the observation from the development staff that his game has been rounding together and that his comfort and confidence are freeing up his playmaking ability.

“JAD’s a responsible player,” Todd McLellan said. “He’s got a little bit of size, he’s good along the boards, he can skate, so we’ll be looking for those things. Keep in mind he has played in the league before, but it’s been a while. I’m sure he’ll be anxious and a little bit nervous again. Getting back into the NHL has been a goal of his. I think he’s been disappointed he didn’t stick with the team right out of camp, but the best thing for him was to go down and play a lot of games. Now we’ll see where his game’s evolved and what he can do on a nightly basis.”

Jaret Anderson-Dolan, on his first full three months of pro hockey:
It’s been good, just a learning experience more than anything. Just trying to round out my game, and it’s completely different than junior, obviously. So, I’m just trying to get better every day. That was kind of the big thing, and having a coach like Stothers down there definitely helps with that.

Anderson-Dolan, on the differences from junior hockey:
It’s just being consistent. You can’t take any nights off. Just getting your game to form your identity for what you’re going to be for the rest of your career – that’s kind of the big thing, especially when you’re young. Kind of just molding that, and I think when you first come in you want to make an impression as a pro, so that’s kind of the big thing for me.

Anderson-Dolan, on keys to his growth this season:
Just maturing overall. When you come in, you want to make an impact but you just kind of want to be quiet and let your actions speak louder than your words, and I’m still like that, but like I said before, just the experience, so a lot more comfortable with my game and playing against men for the past three months has helped. Hopefully that’ll translate into a little bit better experience this time up.

Anderson-Dolan, on whether his personality meshes well with the group’s:
Yeah, for sure. I’m not really a loud guy to begin with. For sure. All the guys here are great. They all make you feel welcome, and we’re here to make an impact. That’s why you get called up, because you make an impact and you want to stay up here, so that’s the goal for me. The older guys that are here make you feel comfortable, and a great group of younger guys that are going to be the future of this team.

Anderson-Dolan, on whether added familiarity with pro hockey has opened up his playmaking:
Just being more familiar with the league and I think just confidence, as well. Having touches, getting touches on the power play and at even strength, having the confidence to make plays and trusting your abilities. For me, that comes with skating and trying to push the pace and make the defenders turn. It’s been coming a little bit more lately, so hopefully keep that going.

Anderson-Dolan, on his skill set:
Just overall, a 200-foot player, a responsible centerman who can create offense. The offense has been coming a little bit more for me recently, but I thunk just a big thing coming into pros was working on my defensive game. I’ve gotten a lot better on draws as the season went on. That was a big change for me, just how good guys were on faceoffs, and having puck possession is huge, so that was a big thing to work on.

Jaret Anderson-Dolan is poised to make his season debut in Carolina tonight. He centered Nikolai Prokhorkin and Trevor Lewis at the morning skate.

UPDATE, 5:00 p.m.: Rod Brind’Amour confirmed James Reimer will start in goal for the Hurricanes/Whalers. Justin Williams was a hot topic during the coach’s six-minute pre-game scrum: