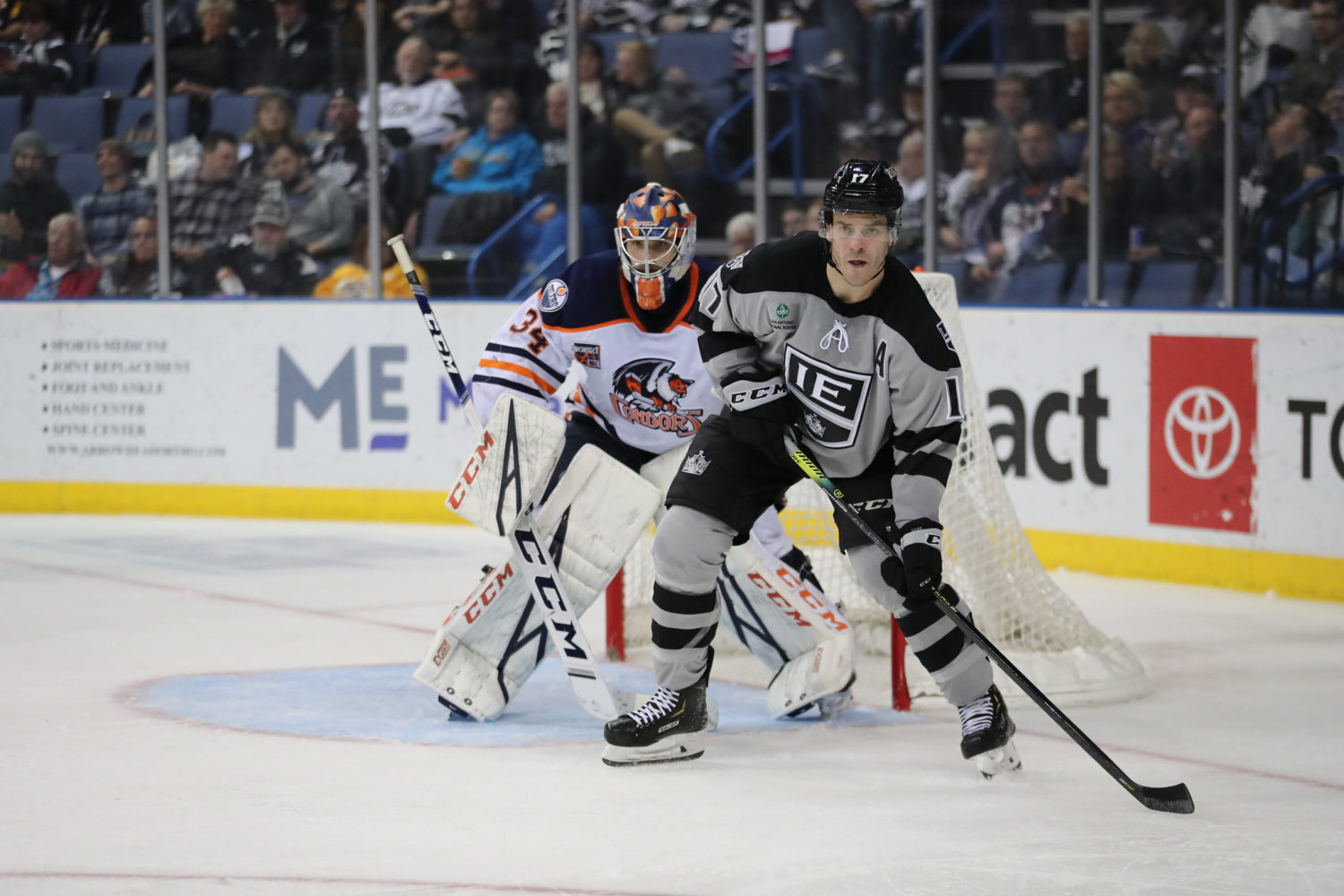 The Ontario Reign came close. It was close but no cigar, but boy was it close.

You could point to any number of moments as the difference, but no matter how you shook it out, it was just one conversion short. Ontario was outplayed on special teams, with the Reign conceding three times on the penalty kill while going 0-of-4 on their own PP – not exactly the recipe for success. At 5-on-5, however, the Reign controlled the game. What felt like a well-played first period wound up 2-0 down, after the Reign couldn’t convert on one of many chances in the first 18 minutes, before a pair of penalties against led to two power-play goals for the Condors.

Ontario pushed extremely hard in the second and third periods, and after going down 3-0, the Reign got goals from Martin Frk and Austin Strand to pull within a goal midway through the third. Frk’s goal was his second point of the night, while Austin Strand’s goal pulls him into a tie for third in the AHL in goals by a defenseman. More below on both players below, but if it felt like Martin Frk was out there every other shift, he was, per Head Coach Mike Stothers.

Ontario conceded its third PPG of the evening, before a skillful goal from Mikey Eyssimont gave the team life for a late push, but the Reign couldn’t convert on a power play inside 2:30 to play to tie the game. The effort and the energy weren’t to fault, because Ontario brought both in droves coming off of the disappointing loss on Wednesday. The group will look to take the positives from tonight’s defeat and roll them into a trip to San Diego tomorrow.

Lance Bouma on coming up just short tonight
I think it was a pretty good effort by us, especially after the last game we had, we wanted a big bounce-back effort. Obviously, the result’s not what we wanted, but I think we were doing the right things tonight and playing the right way. We’ve just got to do a better job on special teams, we had chances to score on the power play, chances to kill those penalties off and if we did that, it would have been a different outcome.

On his 5-on-5 line with Imama and Frk
I think we just played the right way most of the night. We tried to get the puck in behind them and forecheck, use our speed and get open. We shot the puck a lot and tried to get in there for second chances. Like I said, I think everyone played a pretty good game tonight and we’ve got to just build off that.

On the team’s inconsistency from game-to-game
I think, basically the biggest thing is guys are learning how to play at the pro level. It’s tough, you know, you never want to have games like that, games where we’re not ready to play and nobody’s ready to play. We’ve got to do a better job of holding each other accountable, and making sure that we’re doing the right things and build off of those positives.

Mike Stothers on the overall game and effort tonight
First of all, it’s a good response from the 9-0 loss to San Jose and to be honest with you, the first period, up until 2:50 left, when we took the first penalty, which I thought was a cheesy penalty by the way, and then we compounded the problem and we took a second penalty, I thought we played as good a period as you can play and it was an exciting hockey game. I think at that point it changed. 5-on-3 they score, then it’s 2-0, but again you look at it and I go, it could have been pretty demoralizing for the guys, but they didn’t quit. We battled all night long, we had some good looks on our power play. As the game was going on, I think we were coming on and they were the team that was on their heels.

On Martin Frk’s play, and going every other shift in the third period
He was actually going every other shift the whole game. We dressed seven D, and the mindset was to get Frk on the ice every other shift, so the first, second and third period, that’s the way it was unless there were special teams involved. It’s a tough grind, but Marty doesn’t kill penalties, so at least he can spare some minutes there. I think he had 28 minutes there, that’s Drew [Doughty] like numbers, but good on him. He’s in good shape, he can handle it and hey, guys like that, they love it. They want to be on the ice, right? It’s perfect.

On Austin Strand’s goal, and his ability to get shots through and create goals
Austin’s always had that ability, that’s something he had in juniors. We all know what he can do offensively, it’s the rest of the game that we’re trying to work with him on. With Strander, not much is different than what we’ve told him before, it’s just the consistency that we’re looking for. He’s had some great nights and he’s had some off nights, but he’s capable of making plays like you saw and shooting a puck and scoring a goal like that, where a lot of other guys, they’re not capable. He’s got a real offensive upside to him. If he can just get some consistency in his play, shift-to-shift sometimes, it would certainly help, and make him more valuable.

On the peaks and valleys being higher and lower than the average team this season
Youth. Youth and inexperience, that’s what you get. That’s part of the process with a young team. There’s going to be nights when you’re not very good, there’s going to be nights when you’re not feeling right. They’ve got to learn how to play, they’ve got to learn how to push through. There’s going to be games where you fall behind and they’ve got to learn to battle back and prevent these situations from becoming….if you give up five, then don’t let them have six. Part of that resolve is how you respond. You look at it you go, okay, you’ve got some good character people with the way they battled tonight after a 9-0 loss. It’s part of the growing process. When you’ve got a lot of young kids, or inexperienced guys, they’re going to have these peaks and valleys.