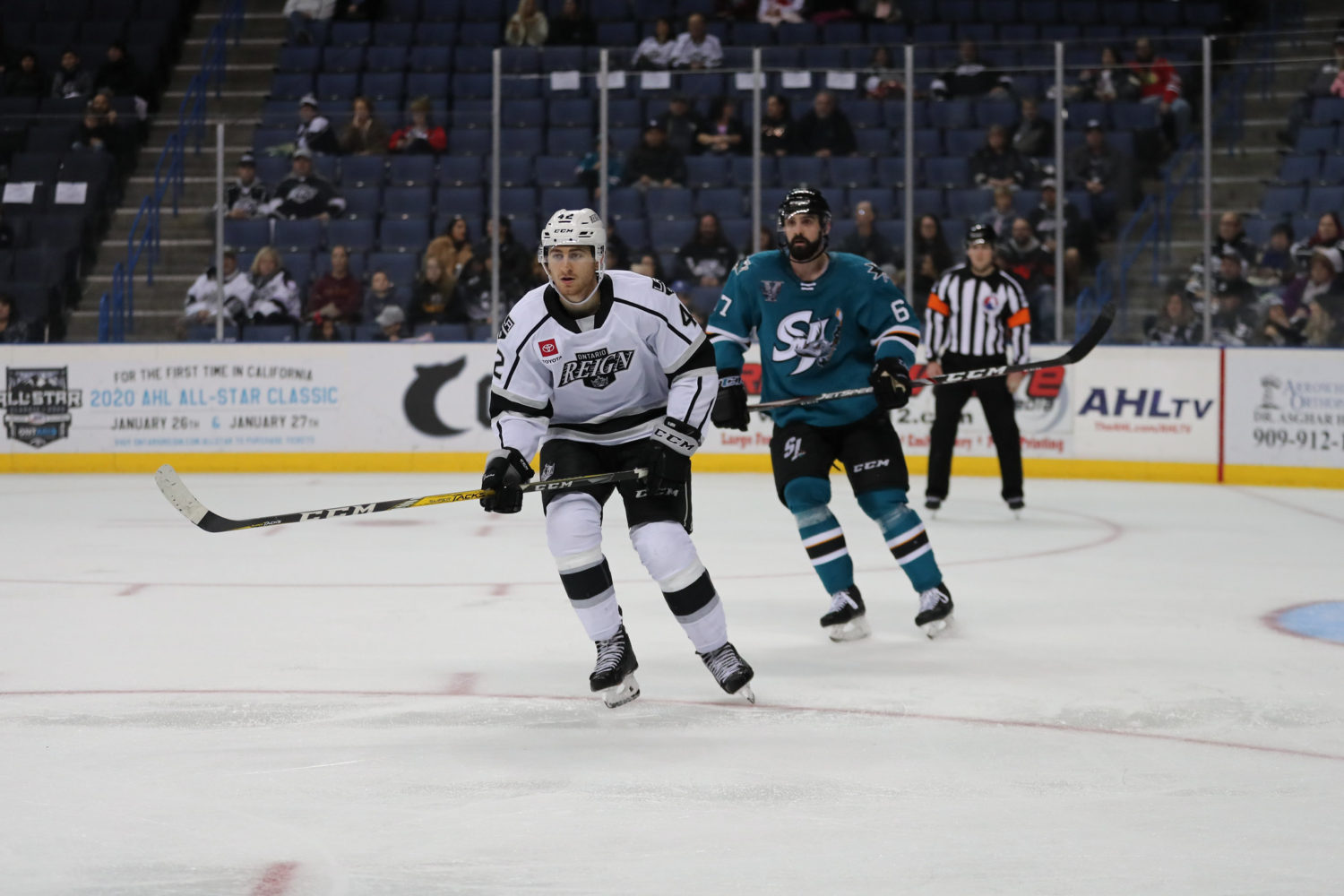 TONIGHT’S MATCHUP: The Ontario Reign and San Jose Barracuda square off in a mid-week matchup at SAP Center. Ontario enters tonight’s action off of a 2-1 win over Stockton on Saturday evening.

1, 2, 3 OUT OF 4: The Reign won two of three games played last week, and three out of their last four overall entering tonight’s action. All four games for the Reign came on the road, with Ontario earning a pair of overtime wins in San Diego and Bakersfield, followed by a 2-1 regulation win in Stockton on Saturday. Ontario is currently in possession of the Pacific Division’s final playoff position, with 36 points.

ROAD WARRIORS: Ontario concludes a five-game road trip tonight, with an aforementioned 3-1-0 record to date. The Reign are tied for fourth in the AHL with 11 road victories this season, and are tied for sixth with 22 points away from home. At 11-9-0 overall, tonight marks the Reign’s 21st road game of the season, as opposed to just 15 at home. Ontario will close the season with 15-of-22 games on home ice, including a stretch of 12-of-16 in February and March.

FOUR SCORE: Reign forwards Mikey Eyssimont (goal) and forward Jaret Anderson-Dolan (assist) each extended their scoring streaks to four games in Saturday’s win over Stockton. Both players have six points over the four-game span (Eyssimont 3-3-6, Anderson-Dolan 1-5-6), while linemate Blaine Byron has five points (2-3-5) over the same stretch. Anderson-Dolan now ranks second on the Reign with 19 points (5-14-19) this season, while Eyssimont is tied for second with eight goals scored.

HE’S FRK’N BACK: The LA Kings assigned forward Martin Frk to the Reign on Monday, which returns Ontario’s leading scorer to the AHL. Frk has 14 goals and 23 points this season, which leads all Reign players in both categories. The 26-year-old forward is tied for fourth in the Pacific Division in goals this season, and was recently selected to represent Ontario at the 2020 AHL All-Star Classic.

KILLER KALE: The Reign will also welcome the return of defenseman Kale Clague, who was assigned to Ontario yesterday. Clague appeared in four games with the Kings, including his NHL debut on December 21 versus Buffalo. Clague leads all Ontario blueliners with 15 points this season, and his six goals are tied for both the Reign team lead amongst defensemen and fourth across the AHL in goals by a defenseman.

A TIME TO VILL: Reign netminder Matthew Villalta made 30 saves on 31 shots in Saturday’s win over Stockton, as he improved to 3-2-0 this season. Villalta has now won three consecutive starts for the Reign and in games in which he has started, the first-year netminder has posted a .933 save percentage and a 2.23 goals against average. Villalta has also posted a 4-3-1 record with the ECHL’s Fort Wayne Komets from eight games played this season.

SCOUTING THE BARRACUDA: San Jose received reinforcements this morning as Joachim Blichfeld was assigned to the team from the NHL’s San Jose Sharks. Blichfeld is San Jose’s second leading scorer this season, with 22 points (11-11-22) from 24 games played, with his 11 goals tied for the team lead. The Reign will also square off again against former teammate Jonny Brodzinski, who has tallied 18 points (7-11-18) from 21 games this season with the Barracuda.