Getting the “diesel engine” going on an important practice day; Forbort acclimates 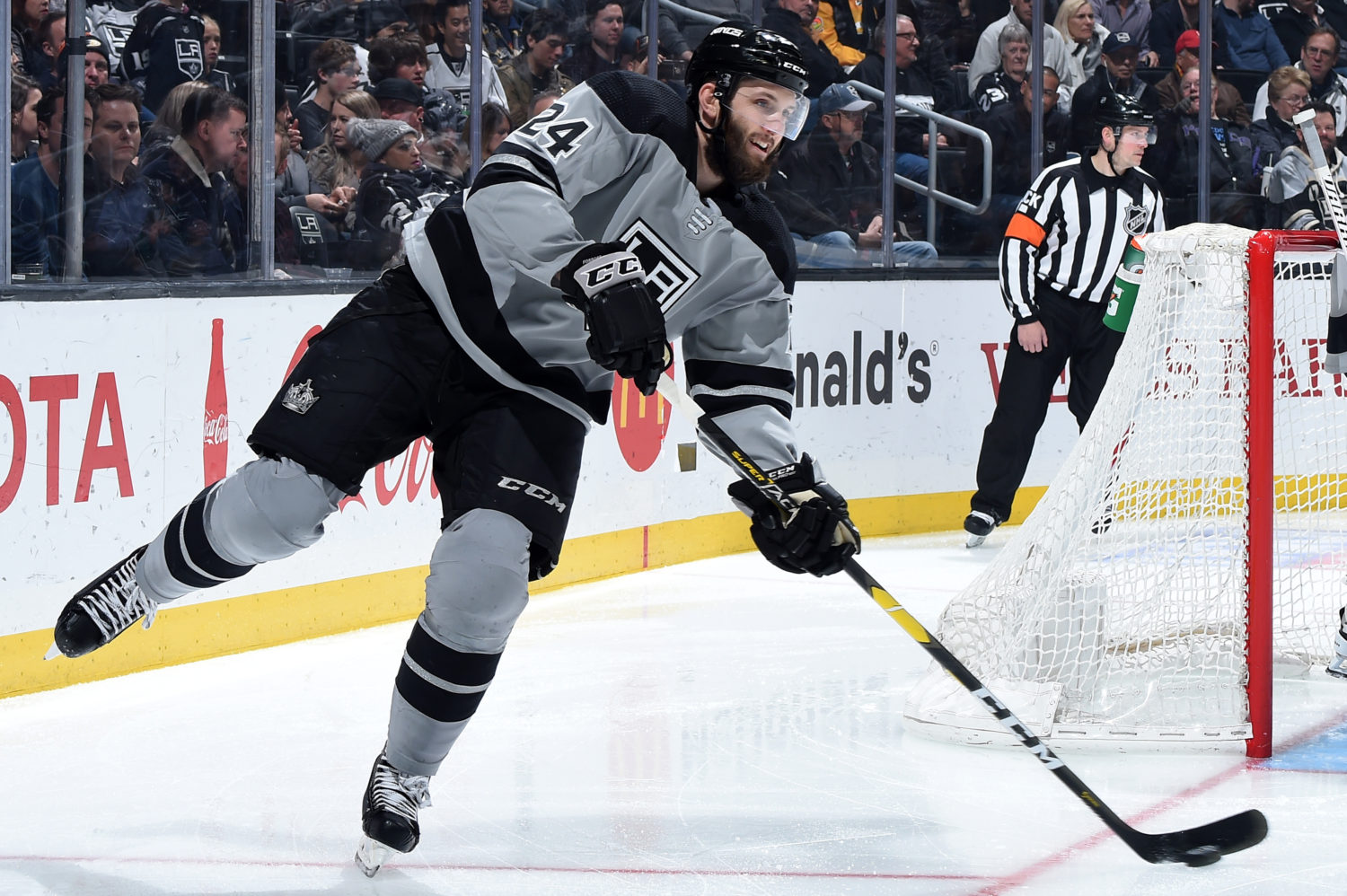 INSIDERS. The Kings took the Toyota Sports Performance Center ice shortly before 11:00 a.m. and skated through an extended practice absent of any indications towards a lineup change. Tuesday’s alignment:

— This was an important practice day. There’s a back-to-back Wednesday and Thursday, Friday is a cross-country travel day and Saturday a game day, so this was the only day in the near future the Kings could really tend to aspects of their game in need of maintenance. “We repair when we spring a leak, but lots of teams do that,” said Todd McLellan, who shared the team’s focus during this stretch. According to McLellan, they’ve been creating shooting opportunities offensively, but those opportunities have been getting blocked and knocked down. Defensively, the opposition’s defensemen have jumped into plays and the Kings have lost coverage. “Those are two priorities. Over and above that, there’s everything else that we have to get better at.”

Quick-up defensive zone puck retrievals formed part of the practice thrust, but as much as the team previously benefited from additional practices that hammered home Todd McLellan’s 1-3-1 forecheck, they’re also a team that benefits from going out and playing a regular schedule. “We’re going to play four games in six nights and five in eight with a lot of travel, so we’re aware of that, but I think our team is better when it plays a lot,” he said. “We equate it to a diesel engine. It’s good when it’s running, and you turn it off, it takes a little while to get going again. We’re looking forward to playing a bunch of games and working our way out of that mid-season slump, if you will, or whatever it is, but we’ll work our way out. We’ll get there.”

McLellan shared that he’s liked the team’s energy, though “the brain, the thought process” has lagged during the two-game losing streak.

— Derek Forbort (back) returned to the lineup against Columbus, recording a hit and a blocked shot in 14:25 of action. Players will admit that there’s an acclimation period of 20 minutes or so before they get a better handle on reads and the pace of the game, and that was no different for Forbort. The opening 20 minutes felt fast – similar to his first game back at the American Hockey League – but he settled in and began to play at the necessary pace.

Forbort ultimately drew praise for doing “lots of really good things” and playing an aggressive game, though many players will also admit that it’s the second and third games back after an absence that are the most difficult because the overflowing adrenaline doesn’t necessarily transfer from the first game back to the next. “Oh, thanks,” Forbort deadpanned upon the reminder.

But perhaps more important than adrenaline or other hard-to-measure variables, Forbort is essentially starting from scratch under a new coach whose evolved systems necessitated a learning curve for a group to ensure their decisions were coming naturally and without a beat of hesitation.

“It’s easier when you’re not thinking about that kind of stuff and it’s ingrained in your mind,” Forbort said. “I’ve just got to keep thinking about that stuff, watching video on positioning and it should come.” He said that McLellan had passed along pointers on positioning and how to dump pucks into smarter areas from behind the bench and kept a good line of communication throughout the game.

“If we go back to where we were as a team coming into the season, that’s where Forbie is now,” McLellan said. “He’s got to think the moment – ‘I’ve got to do this, I’ve got to do that,’ where we’re kind of reacting to the moment now, so it’s catch-up. But he was aggressive. He did good things.”

— In his Montreal debut, Ilya Kovalchuk recorded an assist, four shots, six hits and a blocked shot in 19:25 of action. More from Dave Stubbs at NHL.com.

— Via the NHL, Sam Hunt will headline the entertainment for the Colorado Springs Stadium Series game between the Kings and Avalanche on February 15. I am not a country music fan, nor am I on top of COOL or HOT trends, so this is on you to analyze and spell out for me. What I can tell you is that several years ago, Darryl Sutter had invited Gord Bamford, an Australia-born, Alberta-raised country singer, to a Kings practice in Nashville, and Bamford’s kids took the ice late in the skate. This story doesn’t really go anywhere, but we were entertained at the time that Darryl was friendly with an Australian-Canadian named Gord who played country music. Anyway, more details on Sam Hunt and Stadium Series comings and goings are here.

— More to come on a Wednesday game day, Insiders. Fun stuff to come on ice conditions, John Stevens and the Dallas Stars. Thanks as always for reading, Insiders. Let’s talk soon.