1/6: Projected lineups and hear from Brown and Forbort as they return to the lineup - LA Kings Insider

1/6: Projected lineups and hear from Brown and Forbort as they return to the lineup

The Kings are back at STAPLES Center tonight, as they host the Columbus Blue Jackets in game three of four on their current homestand (7:30 p.m. PT / FOX Sports West / FOX Sports GO / LA Kings Audio Network). Tonight’s game is the second matchup between the two teams over the last two and a half weeks, with Columbus taking Round 1 by a 3-2 final in overtime.

KINGS VITALS: Returnees, returnees, returnees! Dustin Brown, Trevor Lewis and Derek Forbort are all expected back in the Kings lineup this evening against Columbus, with Alec Martinez back in action for his second game. Expected to exit the lineup are Martin Frk (assigned to ONT), Matt Luff and Kale Clague, who were all out late after this morning’s skate, alongside Kurtis MacDermid, who is serving the second game of his two-game suspension and Joakim Ryan, who skated this morning in a red jersey for the first time since he was placed on injured reserve on Saturday.

“We expect to have Lewis, Forbort and Brown back in the lineup, and that can be a really, really good thing, we expect it to be,” Todd McLellan said after morning skate. “When you throw the fact in that Marty is still coming into the lineup, four bodies coming in that haven’t played in a while can also be troublesome, but I expect our group to respond with a good effort throughout and help those guys back into the game.”

When asked if he had ever had a time where three players all returned to the lineup at the same time, with a fourth returning the day before, McLellan was unsure, but went on to further discuss how the group around the returning skaters needs to step up and carry the load.

“I know we’ve had lots of injuries before, did they all wind up playing at the same time? No, not necessarily, but you’re juggling roster spots, you’re juggling cap space, you’re juggling a lot of different things so there’s not much we can do about it,” McLellan said. “It’s just time to get them playing and we expect them to bring their best. I think I was asked a question about evaluating Marty the other day, it’s hard to do that when the group doesn’t play well. For us to expect injured players to return and carry the team is ridiculous, the team needs to carry them for a little while. They have to be responsible and contribute, but everybody’s got to get it done together.”

As far as lines, here’s what is projected for tonight –

BLUE JACKETS VITALS: The Blue Jackets typically do not skate on game days in a full-team capacity, so here’s what their projected lineup looks like per practice yesterday in Los Angeles, Jackets Insider Jeff Svoboda –

For a team that has been absolutely ravaged by injuries, the Blue Jackets rode a 12-game point streak into San Jose on Saturday and finally saw that run come to an end after a 3-2 defeat against the Sharks. The Blue Jackets are expected to welcome the return of defenseman Markus Nutivaara, who was activated from injured reserve on Sunday, and forward Cam Atkinson is “50-50” to play tonight, per Svoboda. Atkinson suffered a high-ankle sprain when these two teams met on December 19 in Columbus. A look below, per hockey reference, at all of the injuries that Columbus is currently fighting through.

The recent streak for Columbus has vaulted it back into the playoff hunt in the Eastern Conference. With 46 points, the Blue Jackets are seven points out of the final postseason berth in the Metropolitan Division but just three points out of the final wild card position, currently shared by Florida and Philadelphia. A big piece in the resurgence has been defenseman Zach Werenski, who was named as the NHL’s Third Star of the Week for the week ending on January 5. Werenski scored five goals from three games, including a hat trick against Florida on New Year’s Eve, and is now tied for second in the NHL in goals by a defenseman this season, one shy of Nashville’s Roman Josi.

Back In Black
The Kings are back in black jerseys at home tonight and three of their players will be as well as they make their return to the LA lineup. As mentioned above, expect Dustin Brown, Trevor Lewis and Derek Forbort to all return tonight against the Blue Jackets.

“Experience, confidence for the most part, those players should be confident, unique tools,” McLellan said of what that trio brings to the Kings lineup. “Brownie’s an abrasive player when he’s playing well, and he has the finish. Lewie’s a brain, I call him a brain, he can maneuver around the rink and play different situations, he’s a good penalty killer and Forby, obviously, with his penalty kill and his presence in and around the blue paint, that’s what you miss with those three players.” 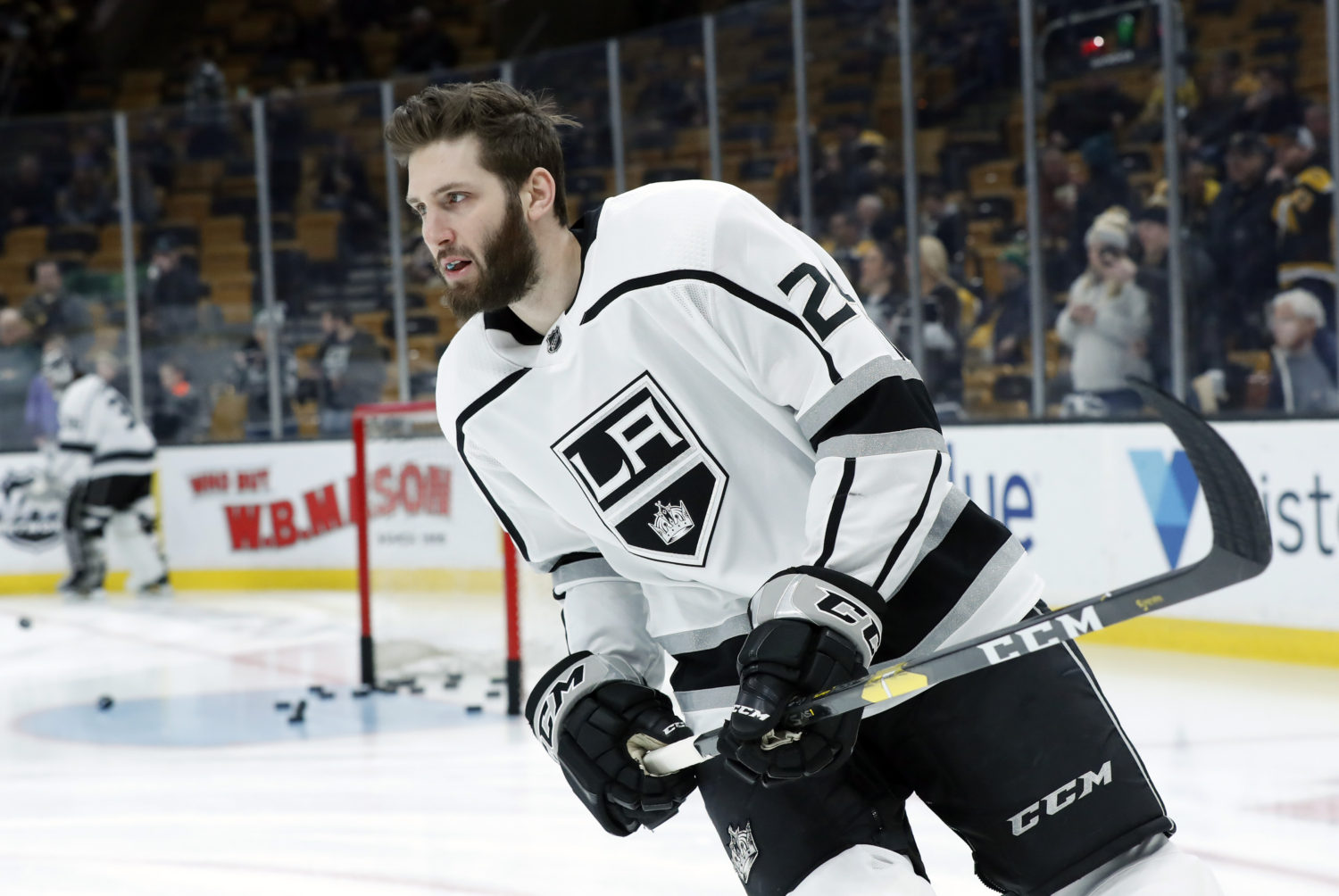 BOSTON, MA – FEBRUARY 09: Los Angeles Kings defenseman Derek Forbort (24) skates in warm up before a game between the Boston Bruins and the Los Angeles Kings on February 9, 2019, at TD Garden in Boston, Massachusetts. (Photo by Fred Kfoury III/Icon Sportswire via Getty Images)

Starting on the backend, Forbort is slated to make his season debut tonight at the NHL level. After he was sidelined with an upper-body injury, Forbort played in five games across two conditioning loans with the Ontario Reign, culminating with a set of three games in a row from December 28 through January 3. The 27-year-old blueliner pointed to those games as being key for him to get back into the playing condition that is needed in the NHL.

“Yeah, definitely, just to prove to myself that I could handle it again.,” Forbort said of the importance of those games. “It was good to get the legs back, playing games is a lot different than going out there and doing drills.”

Tonight’s game marks Forbort’s first under McLellan, but he won’t be a stranger to the new systems of the 2019-20 Kings. Forbort said that the Reign use a lot of the same “terms” and “positioning”, which helps ease the transition.

“I was down in the American League and they were playing some of the same systems down there, so it was good to get those games in and get accustomed to the new systems and stuff like that,” he said. “It’s a faster game up here, so I’ll have to get used to that.”

McLellan also pointed to Forbort’s games with Ontario as him playing within the system. Though tonight is slated to mark his first NHL game of the season, Forbort has been around the system, been around meetings and is at the very least familiar with what the team is trying to do on the ice.

“He’s played the system in Ontario…yes [it will be his first game in the NHL this season], but he’s played the system in Ontario,” McLellan said of Forbort. “He’s had some practices with us, he’s been in meetings basically from the beginning of the year on, so he should have a good idea of what’s required of him. It’s a matter of putting your craft in play. Will he be rusty? Probably a little bit, but we have to play him at some point, he has to play his first game of the season, and tonight’s the night. Let’s hope that he plays real good, and the players around him insulate him a little bit and make him feel comfortable.”

Regarding Brown, his return to the lineup is a bit different, coming off of an illness, as opposed to an injury. As first reported by The Athletic’s Lisa Dillman, Brown fought through a bout with pneumonia, which has forced him out of the Kings lineup since December 23.

“You never want to miss games, as a player,” Brown said after morning skate today. “This one was just different for me. Christmas Day, I knew I probably wasn’t going to play and that was before I got all the tests done and stuff like that, like I said I had never felt like that before. I’ve played sick, I played sick on the road trip, maybe that was my problem, but I knew that day that I was going to be missing some time and once we found out what it was, then I knew for sure.”

Brown is currently tied for fourth on the team in goals and is sixth on the team in points, which adds a key piece back into the Kings lineup. As McLellan noted earlier, he also brings the abrasive element, in addition to his finishing abilities.

For the 34-year-old forward, it’s just nice to be back. Throughout his recovery process, which spanned over the holidays and into the week following, Brown was unsure of exactly what fighting pneumonia entailed, but found out quickly that a lot of rest and recovery was required.

“I knew what pneumonia was, but I didn’t know what the protocol was,” Brown said. “That was my first question for the doctor, ‘is this just a really bad flu’ and he’s like well, not really.’ The first few days I was okay with it, because my body was…I had no juice, but after a few days of just sitting in bed, I started wanted to get moving and they told me I couldn’t, and that was more challenging. I think it probably helped me to just get ready for tonight.”

The Top 6
Brown’s return bolsters the Kings forward units, but don’t expect Brown to skate to the right of Anze Kopitar, as he has so frequently over the past two seasons. The Kings are expected to keep the line of Alex Iafallo, Kopitar and Tyler Toffoli together, and unit that has flashed some production in its brief time together.

“We’re going to keep Toff there for now, and we believe that Brownie can produce with Pro and Carts, there’s no reason why they can’t, and see where it goes,” McLellan said. “If it’s a competition to play with Kopi or Carts or however you want to look at it, then we’ll figure that out as we go. We need offense, we need solid defensive lines and we need four lines. Everybody’s important, regardless of where they play.”

After a scoreless first game against San Jose, Toffoli has collected a point in three consecutive games following (2-1-3), while Iafallo has carried a, perhaps quiet, six-game scoring streak into tonight’s action.

“Toff has been good on that line,” McLellan said. “Throw the last game out, because we didn’t have very many strong players throughout, but he has been pretty strong there. He seems to be excited about playing with them, they’ve adapted well to him, so that will continue as long as it’s productive.” 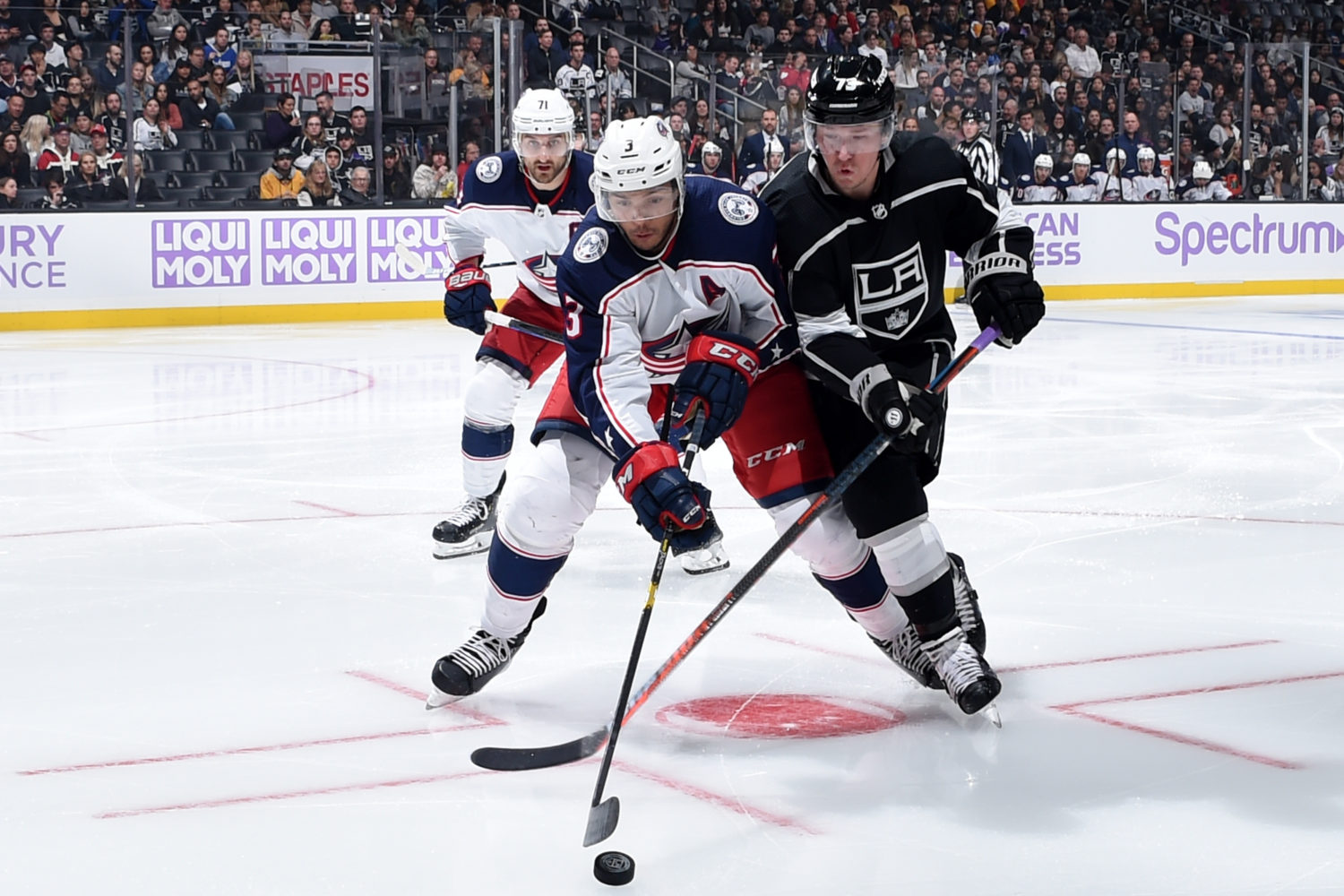 LOS ANGELES, CA – NOVEMBER 3: Seth Jones #3 of the Columbus Blue Jackets and Tyler Toffoli #73 of the Los Angeles Kings battle for the puck during the third period of the game at STAPLES Center on November 3, 2018 in Los Angeles, California. (Photo by Adam Pantozzi/NHLI via Getty Images) *** Local Caption ***