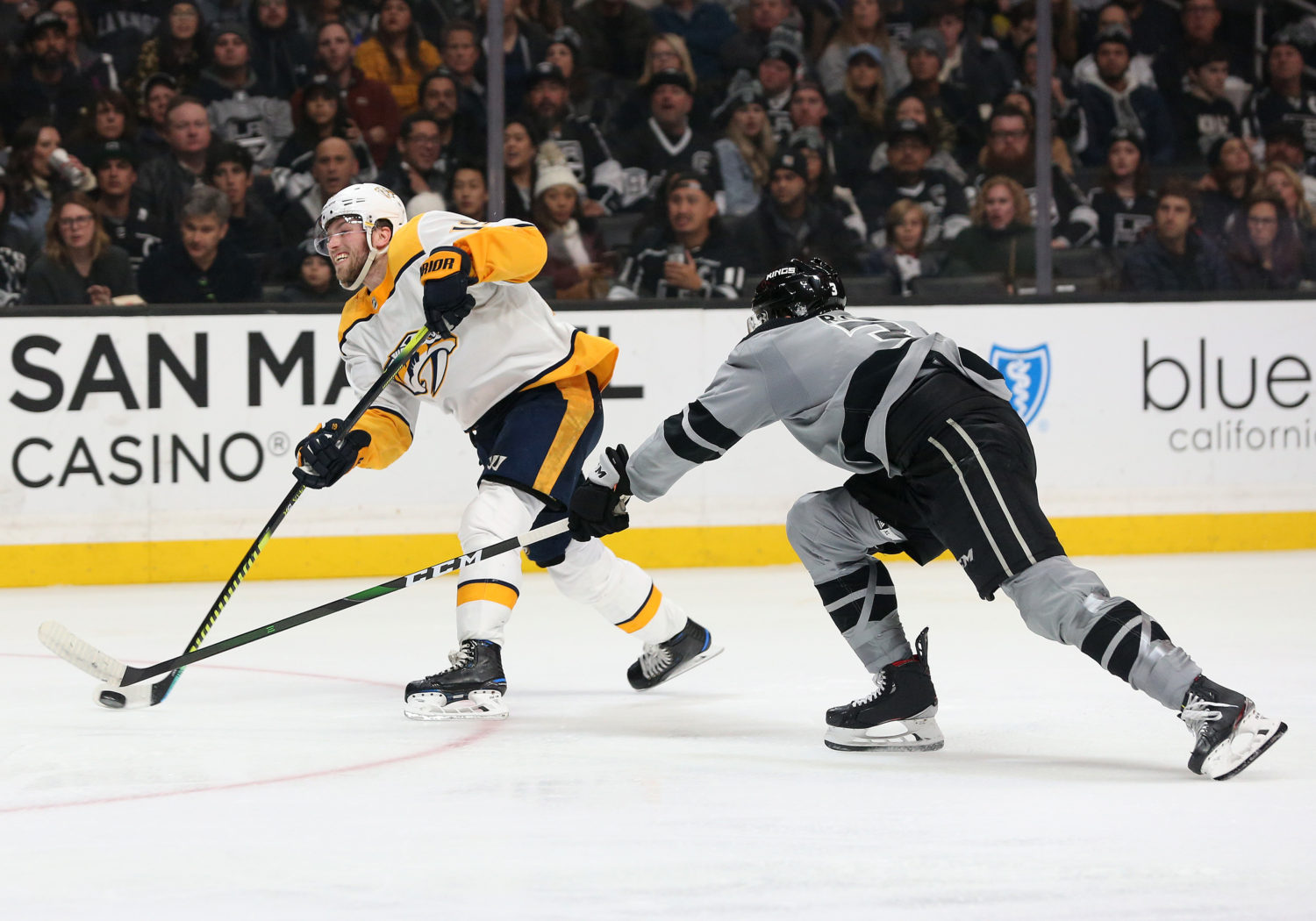 With as much excitement and buzz as 2020 ended with, was as little as it began with for the Kings. Coming off of a dominant special teams performance on Tuesday, in a 5-3 win over Philadelphia, we saw a different team show up on Saturday against Nashville, a team that did not show the fight and grit that had worked its way into their DNA over the last month. Todd McLellan used the word “disappointed” over and over again to discuss last night’s setback against the Predators, and felt his team tried to do things the easy way, against a team that did things the right way. “I just thought one team was so much more intense and hard and committed to doing it over and over again and another team was going to try and win it the easy way and we haven’t done that often,” McLellan said. “Perhaps this was good for our team, a little piece of humble pie won’t hurt us right now, it gives us an indication that we’ve still got a lot of work to do.”

Yesterday’s game squared off two of the NHL’s top three teams in shot differential heading into the game. The Kings, who led the league, were overmatched by Nashville, which ranked third, with Nashville +14 in that department. “I think that they’re a high-volume shooting team, we knew that going in, that was part of the pre-scout,” defenseman Alec Martinez said following the game. “I think we probably let Rinne handle a little bit too many of our dumps back there he’s really good at playing the puck and can kind of serve as another defensemen there. That said, Soupy did a hell of a job today, he made a lot of really nice plays. I think that against a team like that, you’ve got to keep the puck away from the goalie if you want to establish the forecheck.” 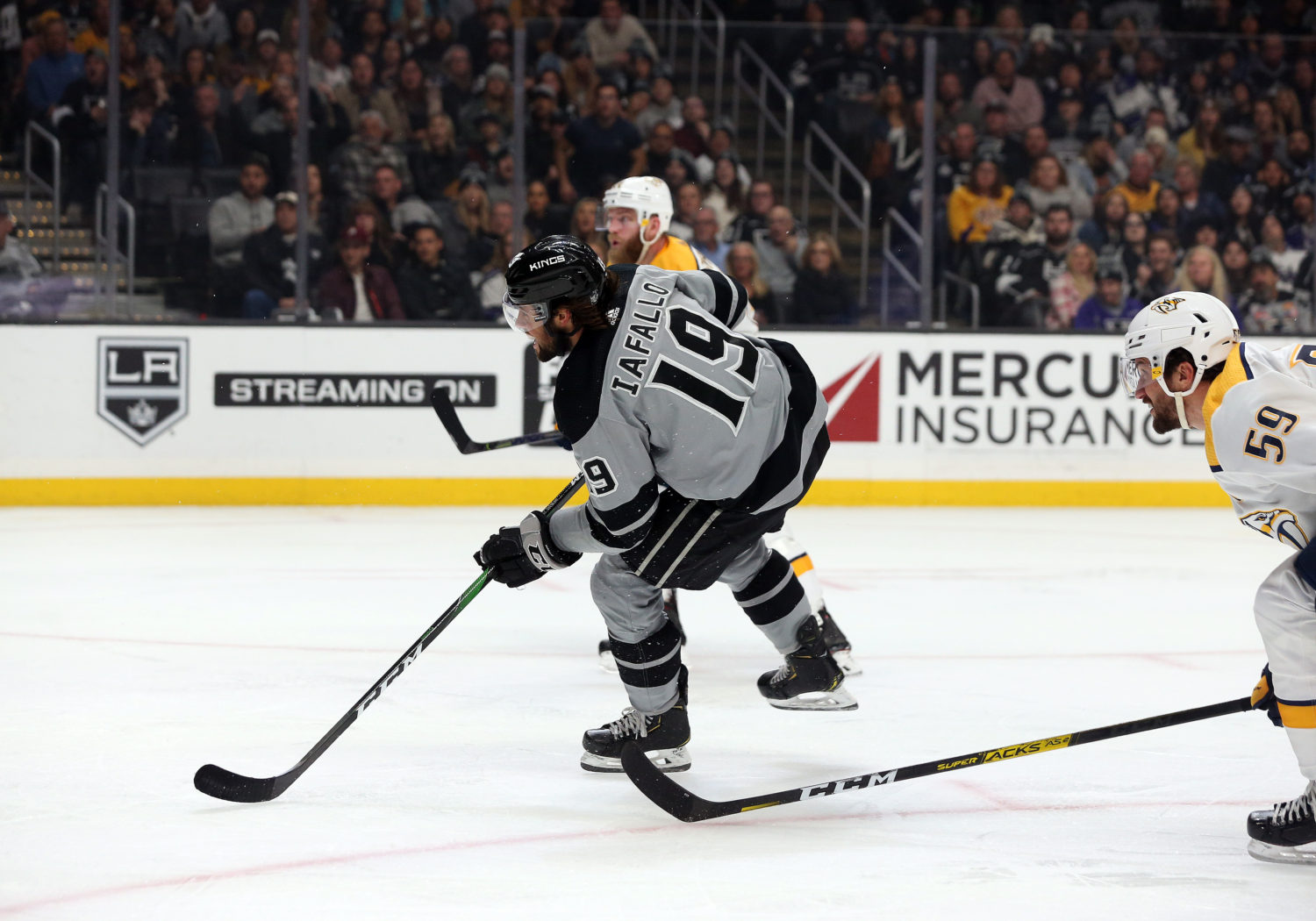 A major shortcoming in the defeat was faceoff coverage. Martinez pointed to at least three of the goals being off of blown faceoff coverage in the defensive zone, while McLellan upped that to saying that all four came off of those situations. Faceoff coverage was a point of emphasis last week in practice, and it will be so again, you can imagine both through video and on-ice execution this coming week. McLellan talked about faceoff situations in his post-game press conference yesterday, and all of the elements that faceoffs consist of. “There’s so many pieces that go into a faceoff,” McLellan said. “Right off the bat in the circle, the two centers, and to me that’s an indication of where your team is at. Are they really battling for ice in that circle, are you winning the 50/50’s, are your D helping out, what do you do with a win, and you can watch our team.” It wasn’t just losing faceoffs either – Nashville’s fourth goal came off of a faceoff win – but the Kings “didn’t do anything with it”, per McLellan. As Jack Harris of the LA Times reported, over the last five games, 9 of the 16 goals allowed by the Kings came within 15 seconds of a defensive zone faceoff. That points to an area in need of improvement, one that you’d think can be corrected with added emphasis.

As we look at the bigger picture, last night’s loss isn’t all doom and gloom for the Kings. It doesn’t completely overshadow that the Kings have earned a point in 8 of their last 12 games, but in a game in which they could have made a statement, the Kings fell short. Over the last month or so, the Kings have begun to establish an identity as a hard-working, gritty, shot-volume style of team, but last night’s game did not represent that identity. Martinez discussed, while he was out, how he saw the Kings start to take the next step in “feeling more comfortable in the system and establishing that and establishing our identity as a team.” The Kings got away from that identity in yesterday’s game against Nashville, and with Columbus coming to town on Monday, they will need to get back to what has made them successful.

The Kings are off today and are expected to skate tomorrow morning at 10:30, prior to the game against the Blue Jackets tomorrow night at 7:30 PM. 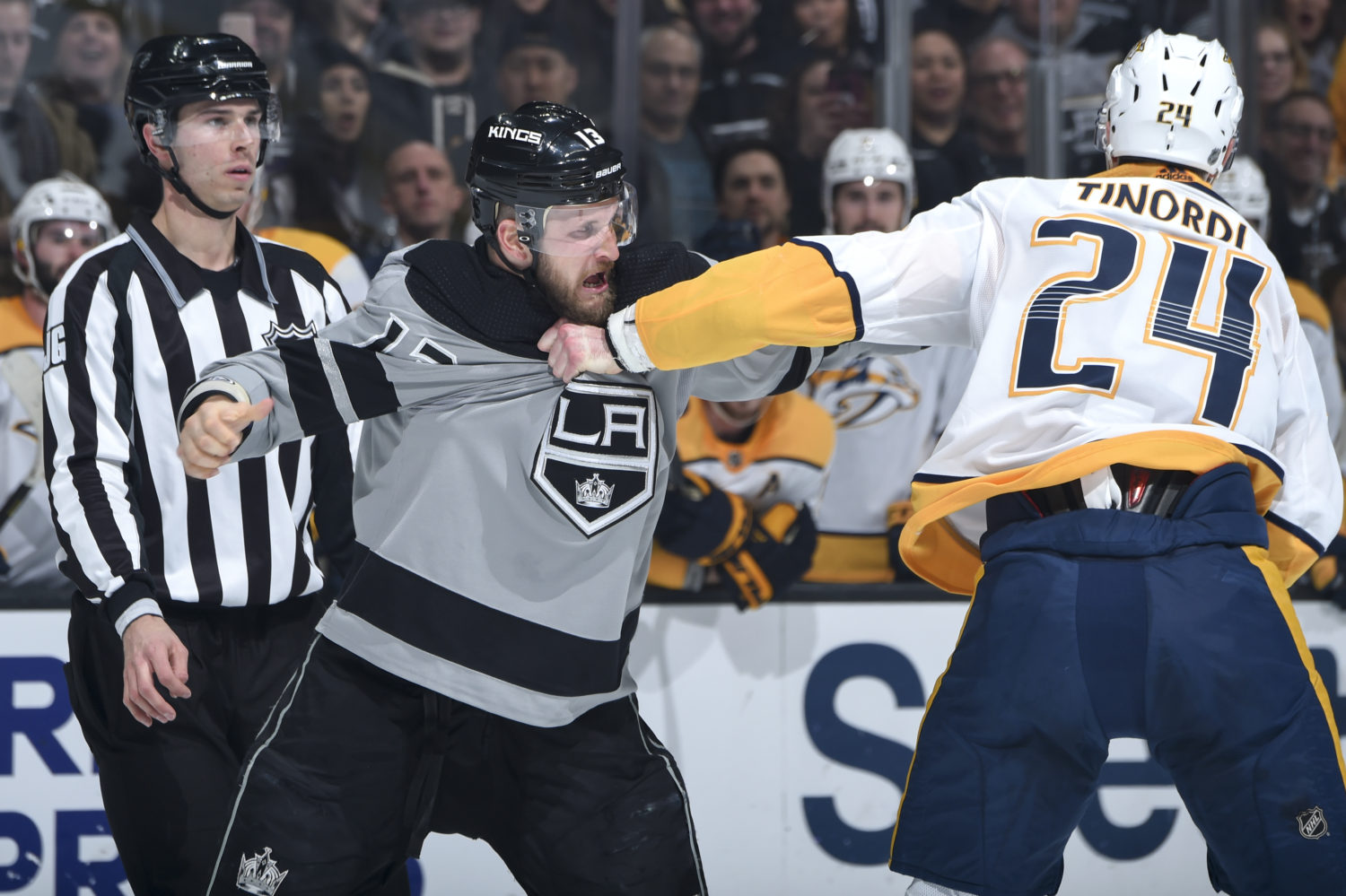 LOS ANGELES, CA – JANUARY 4: Kyle Clifford #13 of the Los Angeles Kings and Jarred Tinordi #24 of the Nashville Predators fight during the first period at STAPLES Center on January 4, 2019 in Los Angeles, California. (Photo by Adam Pantozzi/NHLI via Getty Images)