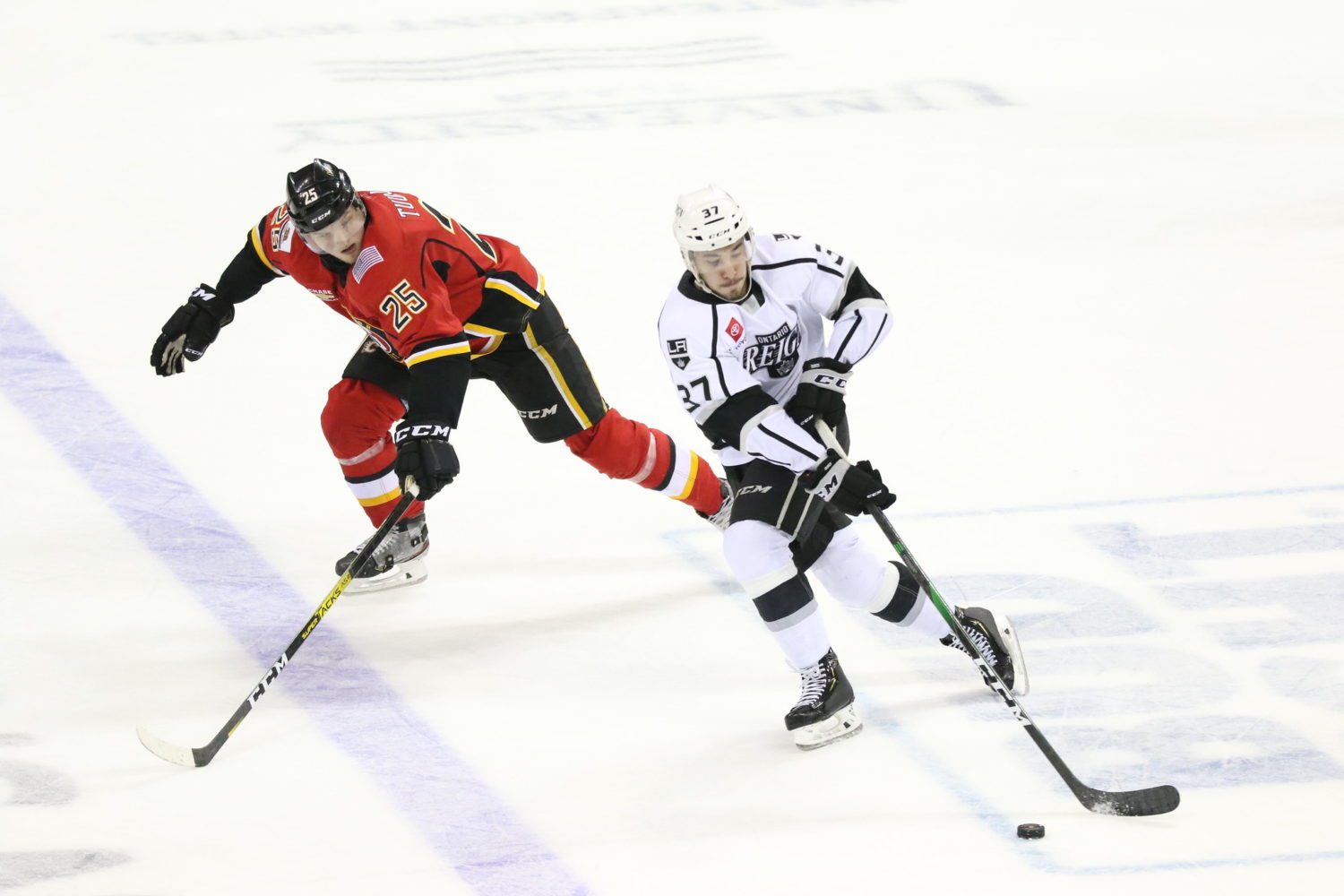 TONIGHT’S MATCHUP: The Ontario Reign and Stockton Heat meet against this evening at Stockton Arena, to complete a back-to-back set. The Reign were defeated in their first game of 2020 by a 6-3 final yesterday evening.

BYE, BYE, BYRON: Ontario forward Blaine Byron led the way for the Reign in yesterday’s defeat, as he tallied a point on each of his team’s three goals. The 24-year-old forward collected three points (1-2-3), setting an new AHL single-game high in points, as he had two assists for the fourth time. Byron has collected six points (2-4-6) in six games, in addition to a +6 rating, since he joined the Reign via trade from Springfield.

HE WENT TO JARET: Reign center Jaret Anderson-Dolan collected a goal and an assist on Friday evening, as he extended his scoring streak to three games. Anderson-Dolan, who has five points (1-4-5) over the three-game span, has now collected multiple points in back-to-back games, and for the sixth time this season. With his second-period tally, Anderson-Dolan snapped a 14-game goalless drought, dating back to November 27.

EYSS IN THE HOLE: Like Byron and Anderson-Dolan, Ontario forward Mikey Eyssimont extended his scoring streak to three games, with the primary assist on Anderson-Dolan’s assist yesterday evening. Eyssimont has five points (2-3-5) over the three games, and seven points (4-3-7) over his last eight games played. Eyssimont now has 16 points (7-9-16) this season, second to Anderson-Dolan amongst active scorers for the Reign.

ANDERSON OF A GUN: Ontario defenseman Mikey Anderson collected multiple points in a game for the first time in his professional career yesterday evening, as he tallied a pair of assists in the defeat in Stockton. Anderson assisted on both Byron and Anderson-Dolan’s goals, and has now totaled nine points (2-7-9) from 34 games played during his rookie season. Over his last 10 games, Anderson has picked up four assists and has a +1 rating and 16 shots on goal in that span.

ON RECALL: The Los Angeles Kings have recalled defenseman Derek Forbort from his conditioning loan with the Ontario Reign. Forbort scored his first goal of the season with the overtime game-winning tally on Tuesday in Bakersfield, and added five penalty minutes from five games played with the Reign in his time with the team. Forbort has missed the entirety of the NHL season to date with an upper-body injury.

HEY NOW, YOU’RE AN ALL-STAR: The American Hockey League announced yesterday that three players – Kale Clague, Martin Frk and Cal Petersen – were selected to represent the Reign at the 2020 AHL All-Star Classic presented by Ontario International Airport. Petersen’s All-Star selection is his second in the AHL, while Clague and Frk earned their first nods. The event will take place at Toyota Arena in Ontario on January 26 and 27.

SCOUTING THE HEAT: Stockton was led by forward Luke Philp, who collected two points in yesterday’s matchup. Philp has scored 10 goals over his last 12 games played, tied for the most in the AHL since November 30, and has 14 points in that span. Between the pipes, goaltender Jon Gillies has won five of his last six decisions (5-0-1), including yesterday’s game, and has posted a .941 save percentage and a 1.80 goals against average.