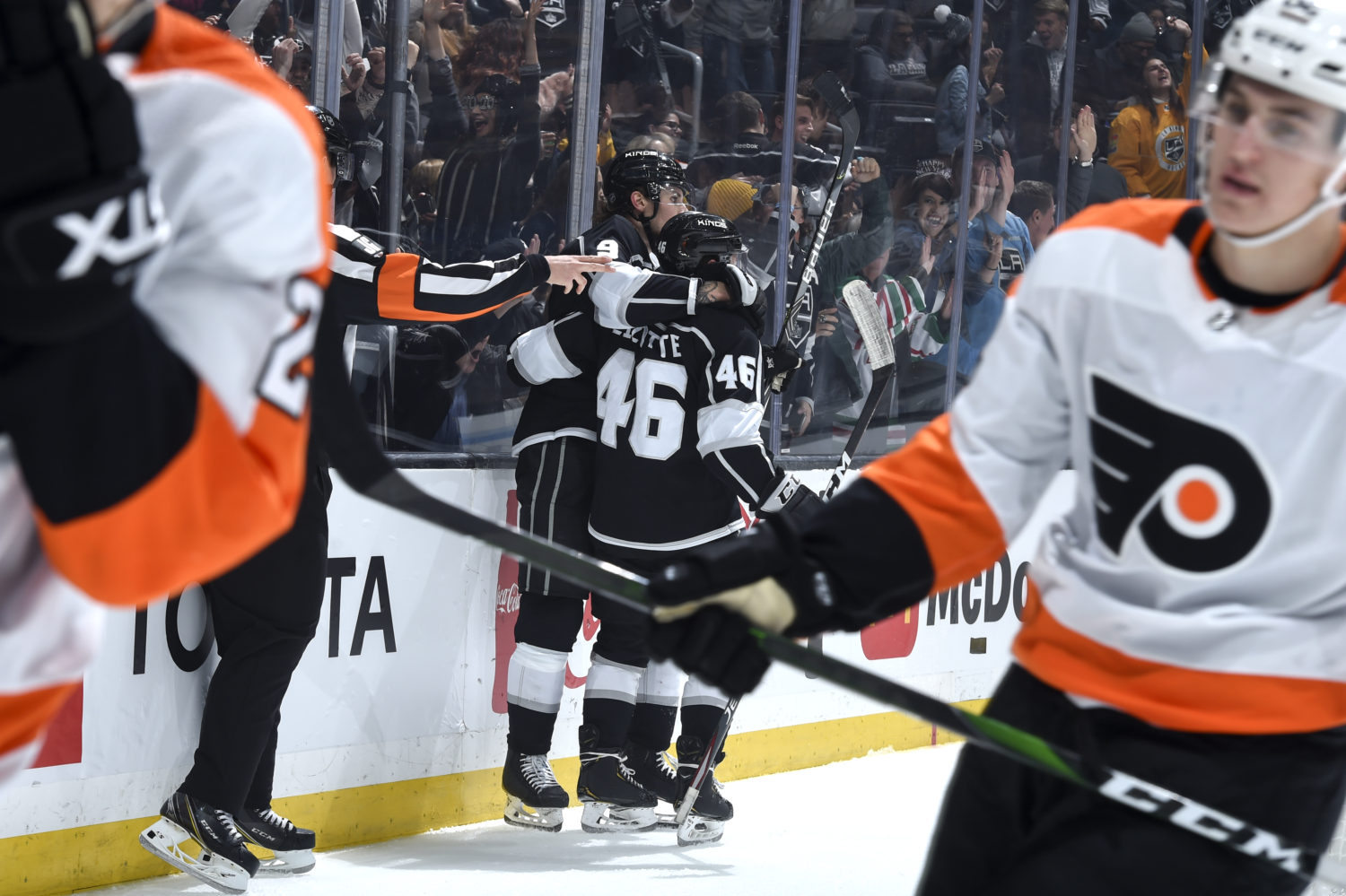 Tuesday’s win over Philadelphia was as dominant of a special-teams performance as the Kings have had this season. For as much as the three power-play goals were discussed, Adrian Kempe’s shorthanded goal was perhaps the dagger that essentially put things away with the game less than 20 minutes old.

With the Kings leading 3-0, the Flyers got a power play late in the period, before the Kings turned it around on them with their fourth shorthanded tally of the season. After Kurtis MacDermid made a stand at the blueline to break up the Philadelphia zone entry, Kempe and Blake Lizotte went the other way, 2-on-1, and one cross-ice feed later the puck was behind Flyers netminder Brian Elliott and the Kings led by four.

Here’s how the 2-on-1 participants saw the play –

Lizotte – On the penalty kill, we try to have a good stand on the blueline and MacDermid had a great stand, a great poke check. It basically left all of their players in our zone, so it wasn’t really a tough play for me, it was more Dermy and Juice with the great shot. Once I picked the puck up, I had all the time in the world and it was a simple pass across and Kempe had a great shot to score.

Kempe – It was a good stand by Dermy on the blueline and I was the guy going back, and I saw that I had four guys behind me, so it was a clear 2-on-1. Obviously, you get a goal there if you have a chance and it was a good play and it was pretty open far side.

To be clear, the primary point of killing penalties is not to score goals, it’s to prevent them and so far this season, the Kings haven’t done a great job of that at 29th in the NHL on the penalty kill (73.6%), tied for the NHL high in power-play goals allowed (33).

But in terms of flipping the script while shorthanded? Los Angeles ranks a respectable tied for ninth, with two goals from Kempe while shorthanded, the first two of his NHL career, over the team’s last seven games. The Kings haven’t had more than five shorthanded goals in a season since the 2014-15 campaign, when Tyler Toffoli scored five himself, as a part of seven for the team in total.

So what is the balance between focusing on the penalty kill, versus turning it around the other way? It’s not much of a balance at all, but rather an opportunistic approach, when the time is right.

“Kill first and then without risk, take what they give you,” McLellan said. “We’ve done a better job in a few areas in my mind, our penalty kill stand has been better at the blueline and something that’s never talked about is we were able to stay fresh quicker. We’re not out there as long as maybe we were at the beginning of the year, so as pucks go up ice, we’ll get a fresh pair out. We have no problem going for 20 seconds if we have to and I think that’s helped us a little bit and it’s also helped us offensively, because we’ve got some good legs when we can change it up.”

For their part, Kempe and Lizotte aren’t out there necessarily looking for offense.

“I mean, in certain spots,” Kempe said of creating chances while shorthanded. “Sometimes, in different games, if we have the puck we can do that. The way we pressure and stuff like that, obviously it’s good to have our speed as well, but we just try to do a good job on the PK, lock them down and clear the puck. Sometimes you get an opportunity to go and we got one [Tuesday] it was a good goal.”

Lizotte, like Kempe, noted that the process for picking a spot is dependent on the situation. It starts with gaining position of the puck and doing so in the right position, to where you aren’t leaving yourself exposed to giving the power play an even higher percentage of scoring.

“I think they kind of present themselves,” Lizotte said of said opportunities. “If you have to go through anybody to get offense, it’s probably not the right play. If you can chip and skate around, that’s probably more realistic, that way, either way, the pucks getting down. In the case two nights ago, it kind of presented itself and the 2-on-1 was kind of evident from our own end.”

It doesn’t hurt, either, that the two play alongside each other at 5-on-5. Lizotte and Kempe, along with winger Austin Wagner, have been a line as of late that has not often changed. That line was formed on November 14, Kempe’s first game on the wing following a healthy scratch, and has been the lone constant in the Kings lineup ever since. Though the situation is obviously different, there are elements of 5-on-5 chemistry that translates over to the penalty kill as well.

“Absolutely, the more you play with guys, the more you get to know their tendencies and where they’re at,” Lizotte said of chemistry translating over from even strength to the penalty kill. “I think with Kempe and I, we’ve really done a good job of that over the last 20 games, built some good chemistry and I think that definitely carries over into the penalty kill and that’s started to show as we have scored a few shorthanded goals.”

Both players have seen an uptick in scoring since the Kempe – Lizotte – Wagner line was put together in mid-November. While Lizotte’s increase has been marginal (.32 points per game to .38), Kempe’s has more than doubled (.24 to .54).

The advanced stats have supported the rise as well. Kempe, Lizotte and Wagner have all seen their possession metrics increase. All three players have higher SAT%, shots attempts per 60 and 5-on-5 shots on goal per 60 since November 14 than they produced from the beginning of the season to November 13.

“Everyone is so skilled and good players, so I think on any night, anyone you play with is going to be a good player, but it’s nice to get some chemistry with consistency with guys,” Lizotte said. “It’s been great the last 20 games.”