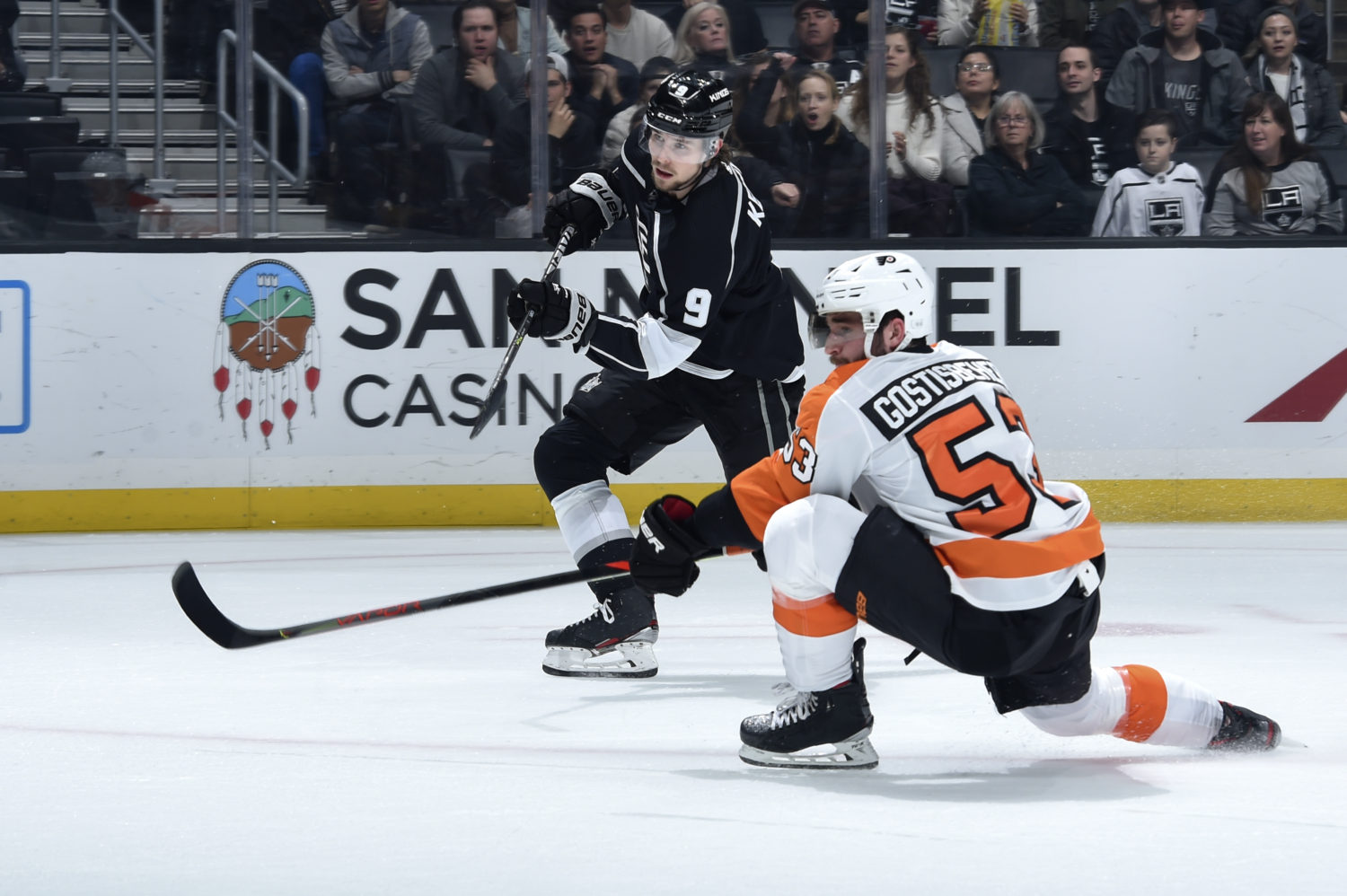 Todd McLellan’s impressions on the team scoring goals in all different ways
That’s a pretty good summary right there. Everybody contributed. Special teams were outstanding, the penalty kill was even very good up until the end there and even in that situation, we did some of the things we wanted to do but it ended up in the net. A real good night for our team, I thought yesterday’s practice showed up in today’s game and that’s a real good sign for our team. They’re picking things up and putting them into play the following day and I look forward to a couple more practices this week.

On getting goals from both PP units, and the play of the power-play overall
That’s important. I think if you can create some type of internal competition between the two then you’ve really got something going, and we haven’t been able to get one unit going, never mind the second. Tonight, they both contributed. We scored them in many different ways, I thought we were able to work real hard to gain possession before the goals came and we weren’t just standing we were moving and good reward for the groups that went on the ice and did it.

On the team’s four-goal first period, and what was different with tonight’s start
The puck went in the net, really. There’s been some nights that we’ve had better starts in my opinion than we had even tonight and the puck didn’t go in the net. Just the ability to finish and get a few by the goaltender is important, but for the most part, I think during the year we’ve played on our toes, we’ve gone after teams. The start is often brought up when we’re behind a goal or two, and often that’s an individual mistake or a quick breakdown in our zone, but that doesn’t surmise the start as a whole, it’s an individual mistake or a moment and it puts us behind the eight ball. I believe, over time, we can clean that up.

On getting goals from throughout the lineup tonight
Four lines, depth. The ability to trust all the players, yeah and the ones that didn’t [collect a point], played just as important a role in the checking part and coming out of our end and that kind of stuff. Quite frankly, I think that Quickie worked too hard tonight, after we got up 4-0, I think he had more work than he should’ve. That’s just a coach being a little bit picky, but it’s something I believe and we can clean that up as well.

On if the Kings are ready to step up and string together some games and push for a playoff position and play “important” games
I’ll go after the second part of the question, we’re going to play important games regardless of where we are. Every game is important to us, and I think I understand your direction, or your description of importance, but importance to us is every night, every minute to improve and that will be a goal of ours as we move forward. The group in the room understands where we are as a team and what we’re trying to do, but they’re not going to succumb to just riding on the bus and being happy where we are, they’re going to push, that’s just the way they are. If they weren’t wired that way, we would’ve quit 10 or 15 games in this year, that’s just not the way the team does it. Can we push and challenge? We’ll worry about the next game and see what happens and keep chipping away. The road trip, 12 of the past 16 on the road before tonight, I don’t think there were very many people in this room that thought we would be still alive at that point and we just proved that we can do it there, and perhaps we can go on a run.

Adrian Kempe on what he saw on his shorthanded goal
It was a good stand by Dermy on the blueline and I was the guy going back, and I saw that I had four guys behind me, so it was a clear 2-on-1. Obviously, you get a goal there if you have a chance and it was a good play and it was pretty open far side.

On he and Lizotte being able to use their speed to create chances on the penalty kill
I mean, in certain spots. Sometimes, in different games, if we have the puck we can do that. The way we pressure and stuff like that, obviously it’s good to have our speed as well, but we just try to do a good job on the PK, lock them down and clear the puck. Sometimes you get an opportunity to go and we got one tonight, it was a good goal.

On utilizing yesterday’s practice day to carry over into tonight’s strong start
Obviously, we hadn’t practiced in a while, but I think we had a good practice yesterday. Everybody worked on some things for the game today and I think that carried on pretty well. We had a really good start to the game, and special teams was a really big factor tonight and that’s something we’ve been trying to get better on as well and obviously it was the key for us tonight.

On having that practice time to work on the power play in particular
Yeah, a little bit. We’ve been talking about moving the puck a little bit quicker and I think we showed that tonight. We had a shooting mindset and we got three goals. That was big for us.

Anze Kopitar on Toffoli’s power-play goal, and the power play in general
Drew actually passed it to me for a redirect and then the rebound was there. All I remember was that Elliott made a really nice save on the first [Toffoli] shot and Ty would have heard about that one if he didn’t score on the second shot. I think, overall on the power play today, we were moving the puck well and maybe showing some different looks than some previous games and it was working.

On quicker puck movement on the power play
Yeah, we’re just trying to be faster and have them be out of position, rather than try to make the perfect play and we can score off of that.

On being named as the Kings Player of the Decade
The first thing that comes to mind is there’s a few more guys in this locker room, or were in this locker room, that could have been the player of the decade. I’ve just been fortunate enough that maybe fans like me a little bit better than the other guys, but that’s about it. The things that we’ve had over the past 10 years, you can pick and choose between Quickie, Drew, Brownie, there’s a lot of guys who could have got that title

Postgame Notes
— With the win, Los Angeles improved to 48-85-17 all-time against Philadelphia, a record that includes a road mark of 25-44-8. The two teams will meet once more this season, on January 18 in Philadelphia.
— With the win, Los Angeles improved to 6-6-3 against the Eastern Conference, 3-2-2 against the Metropolitan Division, 10-7-4 in one-goal games, 16-5-3 when scoring the first goal, 12-2-1 when leading after one period, 11-0-1 when leading after two periods and 5-3-2 when outshot by their opponent.
— The Kings set a pair of season highs tonight, with four goals scored in the first period and three power-play goals scored in the game.
— Forward Anze Kopitar (0-2-2) collected multiple points for the second consecutive game, and now has eight points (4-4-8) over his last eight games played.
— Forward Adrian Kempe (1-1-2) collected multiple points in a game for the second time this season (11/25 @ SJ). Kempe also scored his second shorthanded goal, both of the season and of his NHL career.
— Forward Alex Iafallo extended his scoring streak to five games with a first-period goal. Iafallo has six points in total (1-5-6) over that streak.
— Forward Martin Frk scored his third goal in three games with the Kings, his first power-play goal with the Kings and the seventh of his NHL career.
— Defenseman Derek Forbort scored the overtime game-winning goal tonight in the AHL with the Ontario Reign. Forbort is currently with the Reign on a conditioning loan, and has not played an NHL game so far this season due to injury.
— Los Angeles attempted 50 shots (29 on goal, 14 blocked, 7 missed). Philadelphia attempted 52 shots (35 on goal, 9 blocked, 9 missed). Forwards Adrian Kempe and Claude Giroux led all skaters with both five shots on goal and seven shots attempted.
— The Kings won 24-of-52 faceoffs (46%). Michael Amadio won 2-of-8, Anze Kopitar won 10-of-20, Blake Lizotte won 7-of-12, Jeff Carter won 4-of-7 and Nikolai Prkohorkin won 1-of-5.

The Kings are scheduled to have an off day tomorrow on New Year’s Day. The team is slated to return to practice on Thursday, January 2 at 11 AM at Toyota Sports Performance Center.