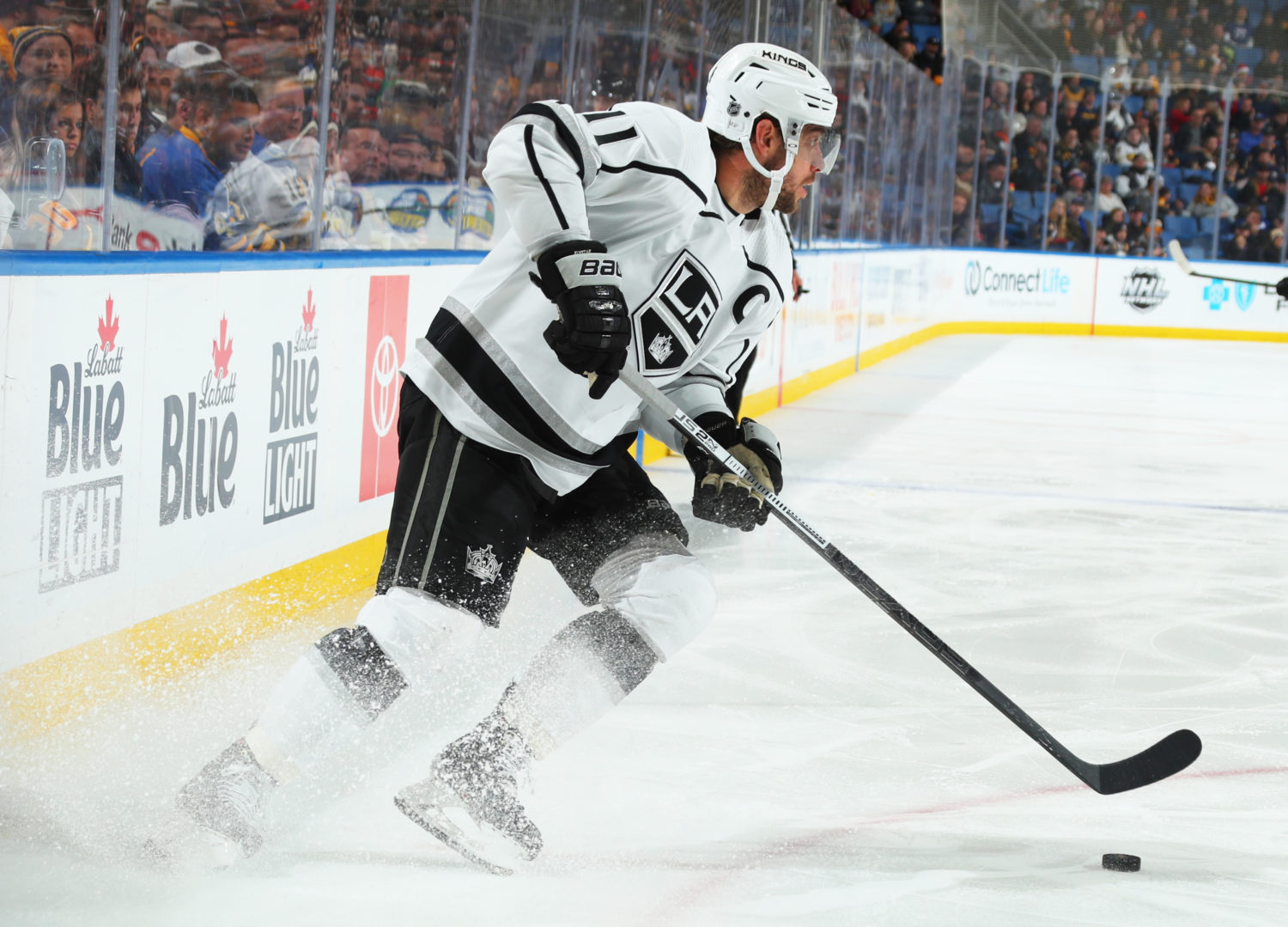 Yes, an actual Los Angeles Kings team practice here at Toyota Sports Performance Center. It was their first since December 11 on home ice, and their first in total since that date, outside of a very quick team skate in Buffalo that was far short a full practice.

When a team has a stretch of games, including a holiday break, in such quick succession, it can create quite the laundry list of things to work on once the team is finally back on the ice. Kings Head Coach Todd McLellan likened the situation to a golfer on the range, working on every facet of his or her game.

“It’s like a golfer – you get out to the range and you need to work on putting and chipping, your long game your short game, sand game, all that type of stuff,” Todd McLellan said after today’s skate. “We need to go through everything and have a review. We have a bit of a menu that we throw up on the board and we got to some of the things today, in fact we had another area that we thought we’d get to but we just ran out of time and we’ll have to offset that for the next couple of practice days coming up.”

From a player perspective, it’s a matter of getting repetitions in and when the schedule calls for that not to be the case, things can get a little bit sloppy. But things like video and off-ice teaching can only go so far – hockey is of course a game of physical execution.

“Our coaches do a really good job of keeping us sharp, watching video, but eventually you’ve got to get the repetitions and it’s not just watching, you’ve got to do it, too,” Anze Kopitar said. “For muscle memory too, but it is what it is, everybody’s schedule is pretty much the same, not a whole lot of practice time.”

Starting on December 10, the Kings played 10 games in 18 days, with three of the eight off days a part of the Holiday Break. That leaves just five other days for “practice”. Now, factor in that December 13 was a travel day from Los Angeles to Pittsburgh and December 16 was an off day after a back-to-back, you’re down to three. The Kings did practice on December 11 at home, did not skate, opting to work out off the ice on December 18 in Columbus and held a short team practice on December 20 in Buffalo, the day before an afternoon game when no morning skate was available prior to.

“The thing is, when you go on a five, six game roadtrip, it’s very hard to maintain, especially with no practice time, it’s very hard to maintain your game at a level that you want it to be at, or need it to be at, to win games,” Kopitar said. “Boston, the game was good, even in overtime, then you go into Columbus and we had it and then that third period we were just backing off a little bit too much and it took them 19 minutes to score the tying goal but they did it and we lost in OT.”

As Kopitar indicated, though the Kings were winning games and earning points in Boston and Columbus, you could start to see certain bad habits creeping back into their game. McLellan expanded on that and noted that though the results were there at times on the road trip, the execution maybe wasn’t where it needed to be, though he also pointed out that things like that seem to come around, as evidenced by the way the Kings played in Vancouver, winding up with zero points.

“Jacques Lemaire used to kind of equate the game to the body,” McLellan said. “He’d say ‘you know what, when you’re finally sick, the germ’s been in you for a while and your body just didn’t fight it off and then it takes over and your game can get like that.’ You get away with winning a few games, maybe not playing as well, I think I mentioned that to you on the roadtrip at the backend. We earned a few points that maybe we got away with and then in Vancouver we probably lost points we probably should’ve had. It all evens out, but the lack of practice time is allowing a germ to get in and not being able to work on it.”

As for how the Kings aligned at today’s skate, there didn’t appear to be any chances to the lineup that took on Vancouver on Saturday, other than Alec Martinez rotating in with the defensemen and Trevor Lewis rotating in with Matt Luff. More on both injured players, amongst others, below.

Following tomorrow’s game against the Flyers at STAPLES Center, the Kings get a bit of schedule reprieve, with an off-day on Wednesday and practice days on both Thursday and Friday before a home game against Nashville on Saturday evening.

All-Star Anze
It’s that All-Star time of year and the Kings will be represented by one, and perhaps two, players at the 2020 edition in St. Louis. The NHL announced today that forward Anze Kopitar has been selected as an All-Star, for the fifth time in his NHL career, while defenseman Drew Doughty has been named to the “Last Man In” poll, which could also send the LA blueliner to the event.

“It’s great,” Kopitar said of the All-Star nod. “Every time you make it it’s an honor, so it should be fun.”

Kopitar’s Head Coach felt that his captain was incredibly deserving of the honor and was happy to see him earn the selection.

“Great choice, very deserving,” McLellan said of Kopitar. “I think when your captain can be selected, that’s a good sign, because it means he’s doing things right most of the time, he’s leading the group of players the right way. For me, it’s been impressive being around him. Obviously the scoring, the hands, the ability to create, but the commitment around the puck is contagious. When he does it right, everybody seems to follow and he never complains about doing it…I never hear him whining about having to defend or play on the other side, or starting a faceoff in d-zone, he just plays and when it’s his turn, he does it the right way most of the time. I think he’s really deserving of going to St. Louis.” 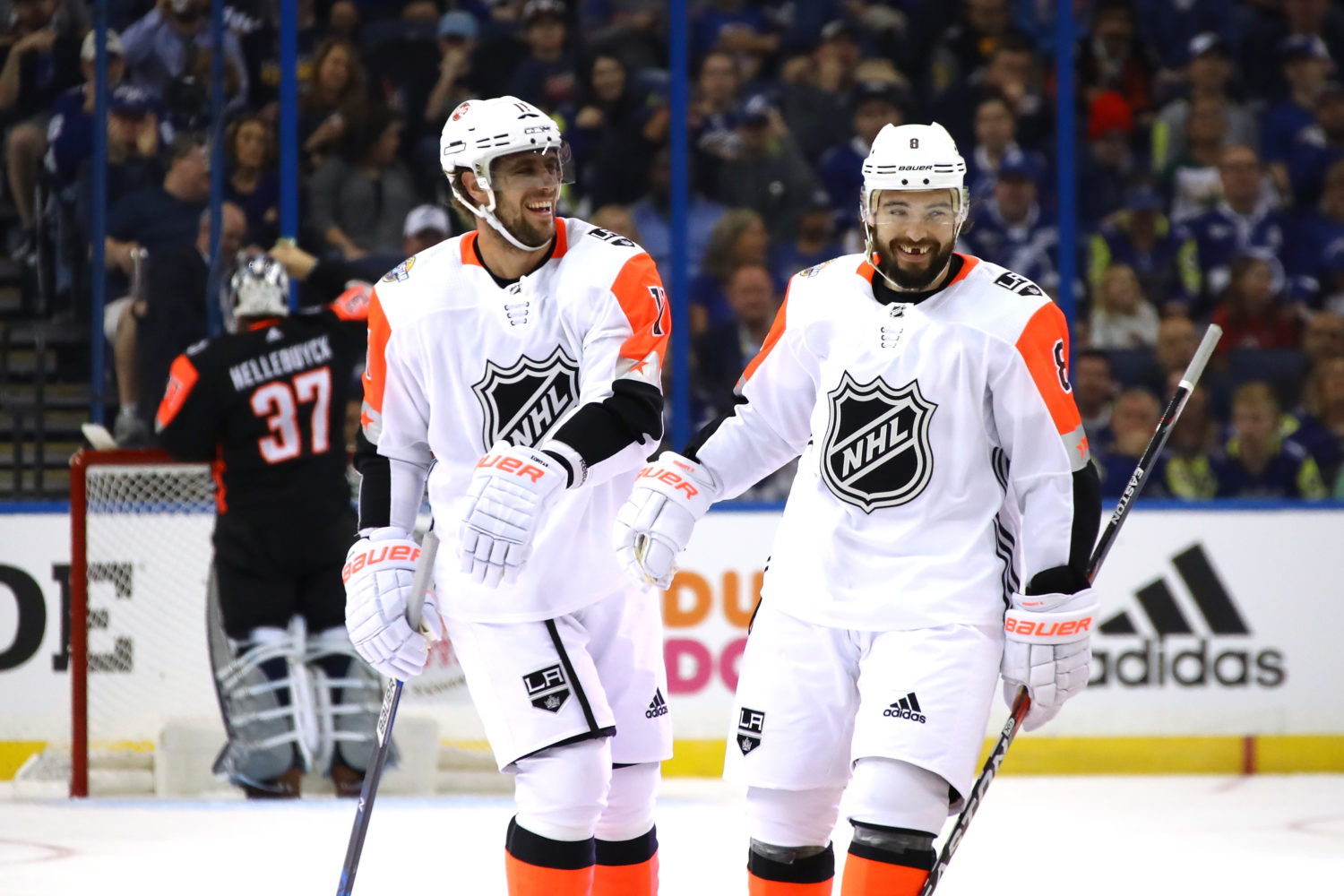 TAMPA, FL – JANUARY 28: {L-R} Teammates Anze Kopitar #11 and Drew Doughty #8 of the Los Angeles Kings celebrate after a goal in the second half during the 2018 Honda NHL All-Star Game between the Central Division and the Pacific Divison at Amalie Arena on January 28, 2018 in Tampa, Florida. (Photo by Bruce Bennett/Getty Images)

From his previous few trips to the midseason event, Kopitar most fondly remembered his trip to Tampa Bay, which is also his only experience with the current 3-on-3 format. Kopitar skated alongside Doughty in that game and the Pacific Division skated to the title, defeating the Central Division, followed by the Atlantic Division, each by a 5-2 final.

“We won it in Tampa, last time we were there and I was there with Drew, so that kind of made it fun…I mean you know other guys, obviously, but you have a teammate there so that was pretty cool. The other ones, I think I was by myself too…but we won it in Tampa.”

Starting at 9 AM Pacific on Wednesday, January 1, fans can vote for Doughty to join Kopitar in St. Louis via the Last Men In ballot. Each team is represented by one player for each division’s final spot at the game. In the Pacific Division, Doughty is up against Ryan Getzlaf (ANA), clayton Keller (ARI), Johnny Gaudreau (CGY), Ryan Nugent-Hopkins (EDM), Tomas Hertl (SJ), Quinn Hughes (VAN) and Max Pacioretty (VGK).

For more information on the Last Men In ballot, click here and fans can vote for Doughty by visiting NHL.com/Vote. 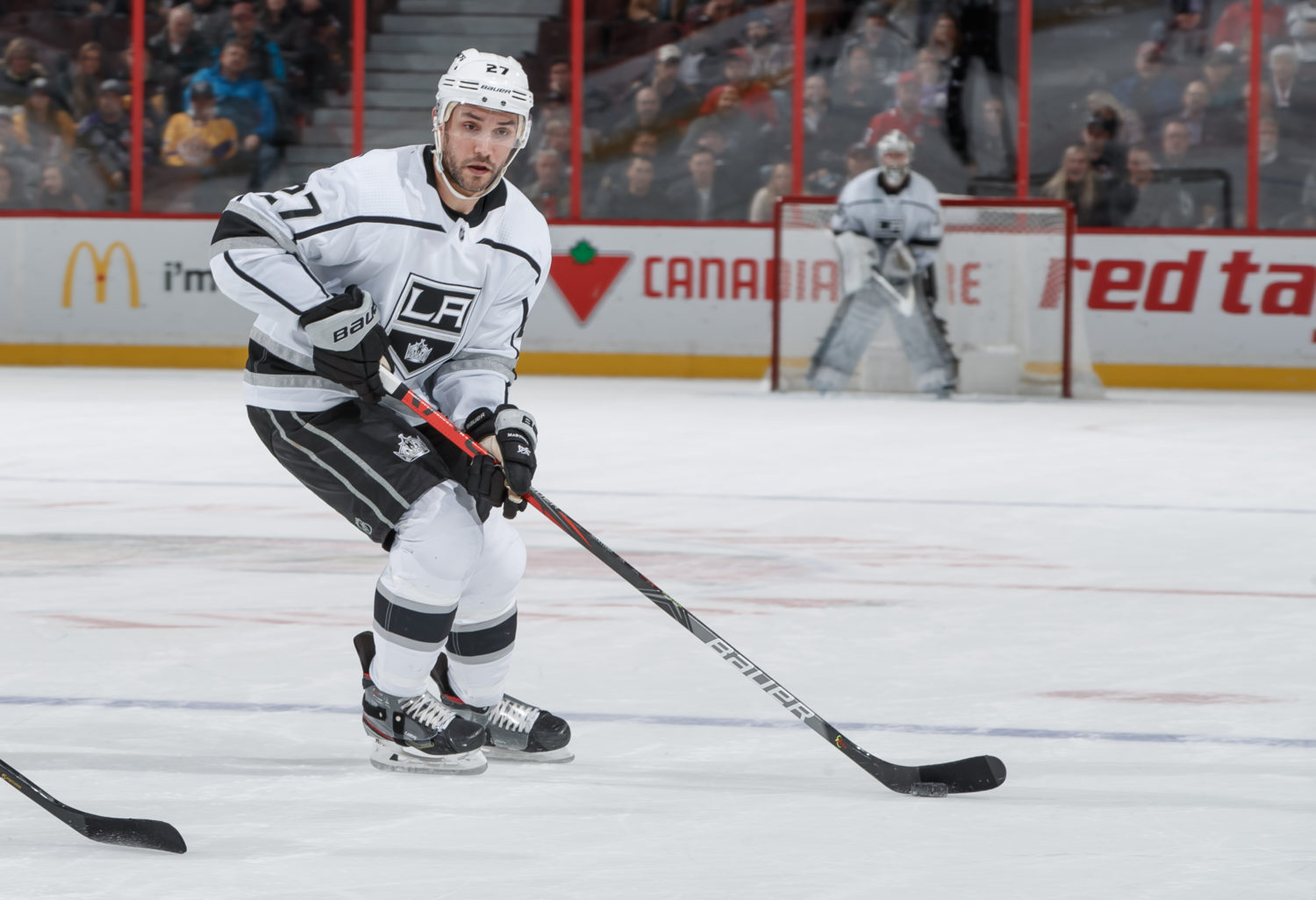 OTTAWA, ON – NOVEMBER 7: Alec Martinez #27 of the Los Angeles Kings skates against the Ottawa Senators at Canadian Tire Centre on November 7, 2019 in Ottawa, Ontario, Canada. (Photo by Andre Ringuette/NHLI via Getty Images)

Today’s practice featured both Alec Martinez and Trevor Lewis in regular colors, with Martinez rotating in with the defensemen and Lewis rotating with Matt Luff on the right side of Michael Amadio and Kyle Clifford. Not on the ice this morning were Dustin Brown or Joakim Ryan and while Ryan’s status for tomorrow is not yet known, the other three were all ruled out for tomorrow’s game against the Flyers.

“Brownie won’t be available tomorrow for sure, and we’ll see how he is next week, obviously not skating yet,” McLellan said. “The other two [Martinez and Lewis] just getting back into practice for the first time in a while and they won’t play tomorrow, but they’re obviously getting closer.”

When asked on whether Brown’s illness was something normal, that seems to pop up with players around this time of the year, or it was something a little bit more, McLellan noted that it’s “normal”, but added that it “takes a little longer” in terms of the recovery process. More to come later on re: Brown.

With Martinez and Lewis, it’s a good sign to see both back in a full-team practice, even if both are still at least one game away from returning to full action with the team.

Martinez spoke informally with reporters after today’s practice, talking about the recovery process after his artery was sliced by a skate on November 25, and he sustained a laceration to his right wrist. Martinez underwent successful surgery to repair a radial artery and two superficial radial nerves, following the incident. He described his injury as flukey, not a part of a bigger issue around the NHL in terms of player safety or injury prevention. He praised his medical staff that helped to treat the injury promptly and efficiently and is now using a protective, cut-resistant sleeve over his right wrist as he returns to practice.

More to come over the course of the week as all of the aforementioned players, along with defenseman Derek Forbort, currently on a conditioning loan in the AHL with the Ontario Reign, progress towards a return to the Kings lineup. 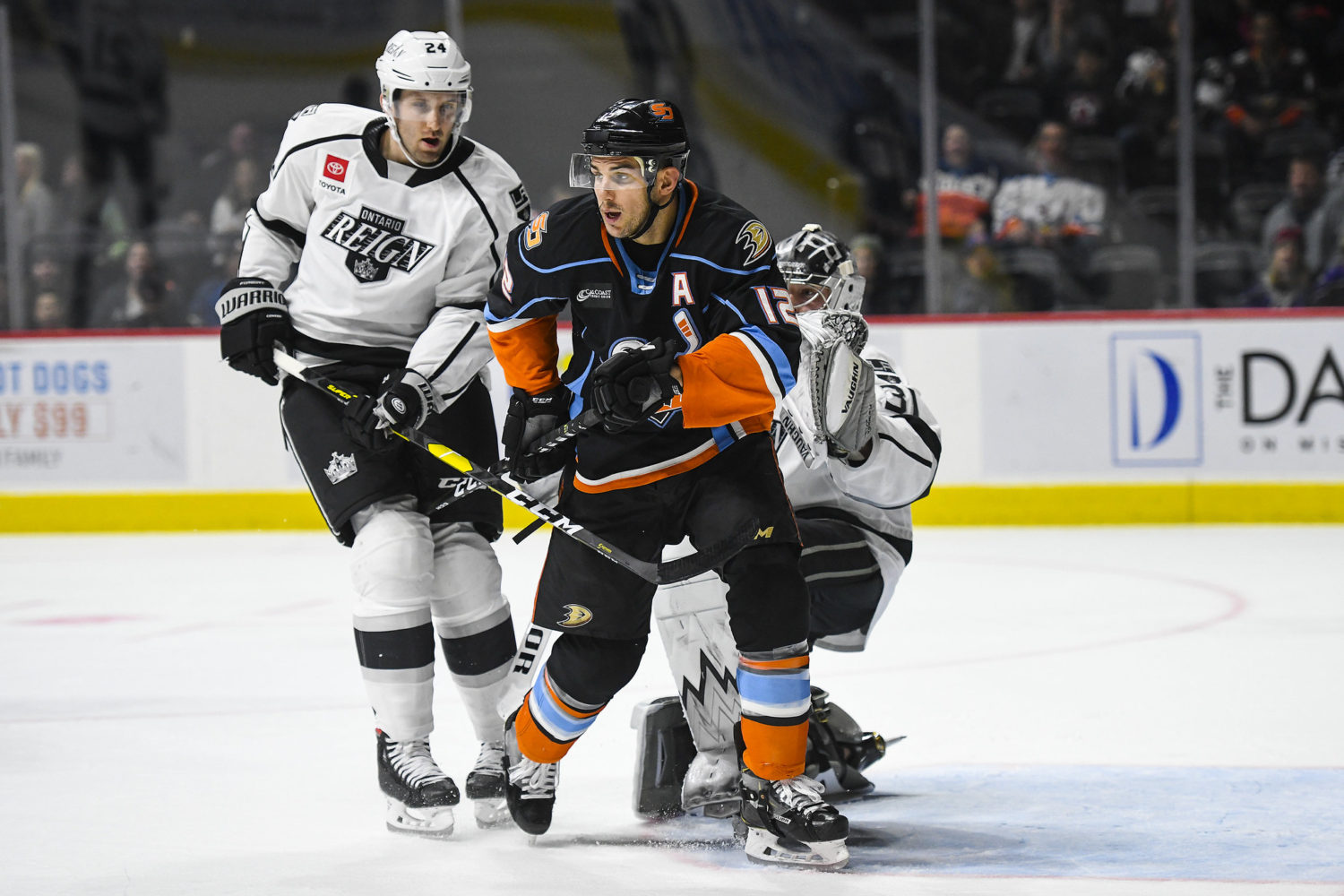