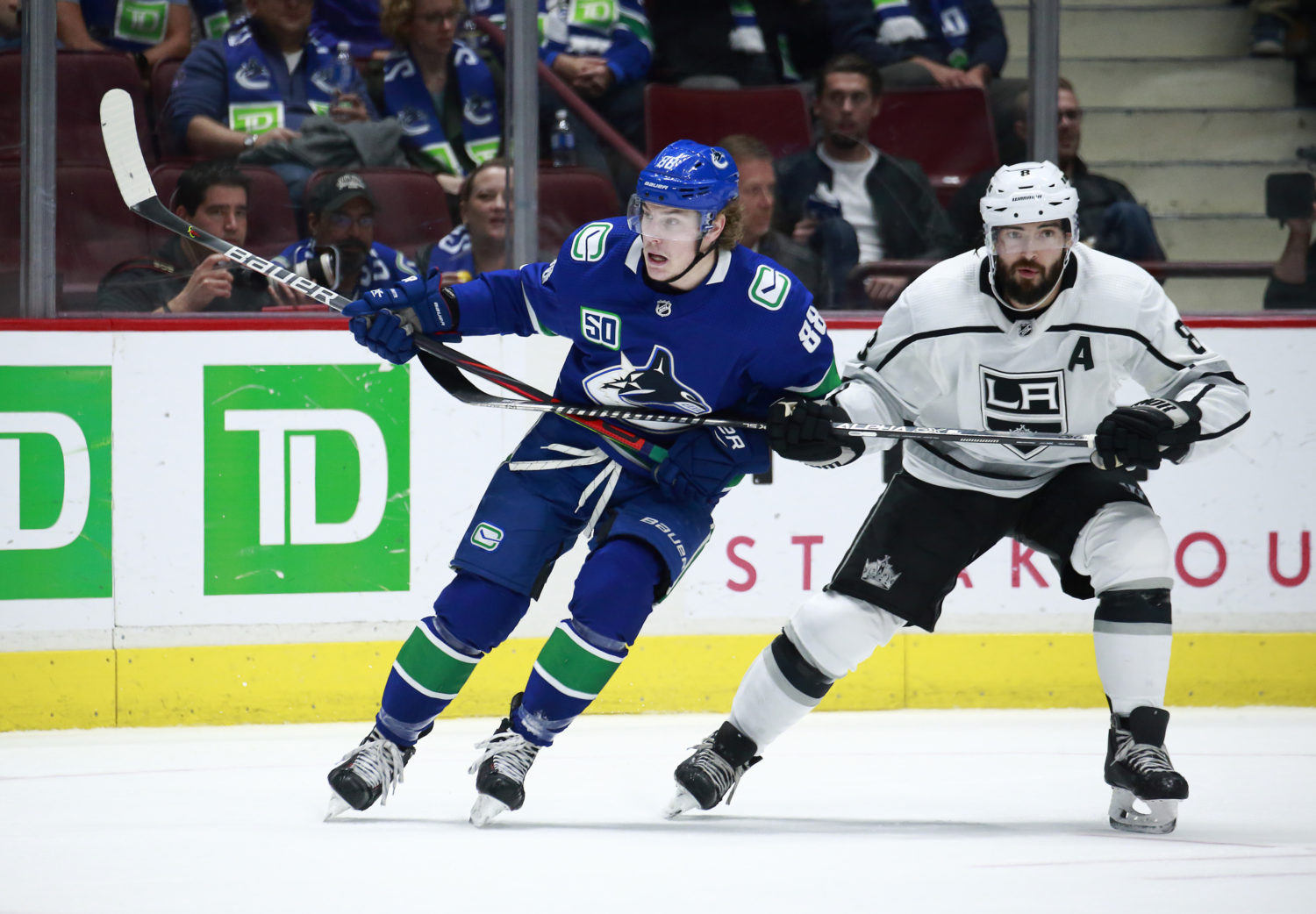 The back-to-back ends tonight in Vancouver, as the Kings take on the Canucks (7:00 p.m. PT / FOX Sports West / FOX Sports GO / LA Kings Audio Network). Tonight’s matchup is the second game in 24 hours for the visitors, and the first game out of the holiday break for the hosts and as such, one team skated this morning and one did not. Starting with the team that did not…..

KINGS VITALS: Todd McLellan indicated yesterday morning that there was a “real good chance” that Jonathan Quick gets the nod between the pipes tonight in Vancouver. McLellan pointed to the back-to-back games off of the holiday as a chance to let Quick take a day to get back into the flow of things. “It gives Jonathan a little more time to get the body going again and warm up,” McLellan said after yesterday’s morning skate in San Jose. “I don’t think there’s any such thing as load management in hockey, but there’s common sense. We chose to go with Soupy tonight and we’ll see what we do tomorrow.”

The Kings have, historically this season, split their goaltenders on back-to-backs, so we’ll go with the logical assumption that Quick is in net tonight at Rogers Arena. All-time, Quick has his highest save percentage versus any Western Conference opponent against Vancouver. The 33-year-old netminder is 18-18-4 all-time against the Canucks, but has a 2.04 goals against average and a .927 save percentage. Quick’s 40 appearances against Vancouver are his third most against any team (ANA – 44, ARI – 42) and if he makes at least four saves tonight, he will have stopped more pucks against the Canucks than against any team in his NHL career.

With no morning skate today for the Kings, tonight’s lineup is an unknown, though the options are pretty limited in terms of making a change. With Dustin Brown (illness) not making the trip and Trevor Lewis (upper-body injury) placed on IR yesterday, the Kings have just 19 skaters with them here in Vancouver, with defenseman Kale Clague the only other option at McLellan’s disposal outside of last night’s group of 18. The 21-year-old Clague is a Western Canada (Alberta) native, and if he does draw in tonight, is quite familiar with the region from his time in the Western Hockey League.

UPDATE – Per Todd McLellan’s pre-game availability, Kale Clague is in for Joakim Ryan, who is a little “dinged up”. Defensive pairings were not known as of that scrum.

CANUCKS VITALS: Jacob Markstrom is expected to get the nod in net for Vancouver this evening. Markstrom is putting together what could shape up as his best season to date as an NHL netminder, with a 12-11-3 record, a 2.66 goals against average and a .917 save percentage through 26 appearances. In his NHL career, Markstrom has posted a 5-3-3 record from 11 appearances against the Kings, along with a .912 save percentage and a 2.77 goals against average, which are almost perfectly in line with his career statline of .910 and 2.80 respectively.

Per the Canucks team account, the team is expected to use the same lineup as was used in their last game, a 4-2 win over Edmonton on Monday. That lineup is shown below –

Vancouver got points from nine different players in the victory over the Oilers, with forward Bo Horvat scoring his tenth goal of the season and a few unusual suspects (Quinn Hughes – 4, Loui Eriksson – 2 and Tyler Motte – 1) also chipping in with goals.

“That was one of our best games of the season, we skated hard and everybody was involved against Edmonton,” Elias Pettersson said this morning, as shared by the Canucks. “We need to build off that game even though it was before the break. That was a fun game.”

The lineup does not include the trio of Josh Leivo, Micheal Ferland and Brandon Sutter – All three remain on injured reserve and did not skate with the team this morning or yesterday. The lineup does include forward and former That 70’s Line member Tanner Pearson, who has 12 points (4-8-12) over his last 13 games played. Tonight will be Pearson’s sixth game against the team that drafted him, and he’s amassed three point (1-2-3) from the previous five.

– Expect defenseman Derek Forbort to join the Reign on his second conditioning assignment of the season, as the Reign take on San Diego tonight on the road. Forbort originally linked up with Ontario for a pair of home games in late-November (11/27 and 11/29) but had a “little bit of a setback” after those two games. His overall timeline is still a bit unknown, but good to see him back in game action tonight. Ontario plays its next five games on the road: tonight in SD, Tuesday in Bakersfield, Friday/Saturday in Stockton and the following Wednesday in San Jose.

Expect Derek Forbort to join the @ontarioreign in San Diego tonight on a conditioning loan. Would be his third AHL game of the season after he played two in late-November.

– Another note on the injury front is that per Team Finland, Rasmus Kupari is expected to miss the remainder of the World Juniors tournament with a reported knee injury. Kupari suffered the injury in his team’s first game, during the third period on Thursday against Sweden. The 19-year-old forward weaved through the neutral zone and attempted to jump around Team Sweden defenseman Philip Broberg, which led to an awkward collision. Per Kings GM Rob Blake, as reported by The Athletic’s Lisa Dillman, Kupari is headed back to LA in the “next few days” and his time frame is currently unknown.

Re Kupari injury
Headed back to LA in 'next few days,' per Rob Blake
Added that they don't know the time frame just yet ..

– As reported by John Hoven this morning, defenseman Daniel Brickley skated for the first time with the full Reign group at Toyota Sports Performance Center in El Segundo. Brickley, wore a non-contact red jersey and skated for “about 45 minutes” per Hoven. He had previously skated away from the full team, but regardless, his presence on the ice is a nice sign – Brickley has been out of the lineup since October 5, Ontario’s second game of the season, after he skated in both Reign games on opening weekend. Brickley’s absence has been undisclosed, and his return to game action is not expected to be imminent, but nonetheless an encouraging sign in his recovery.