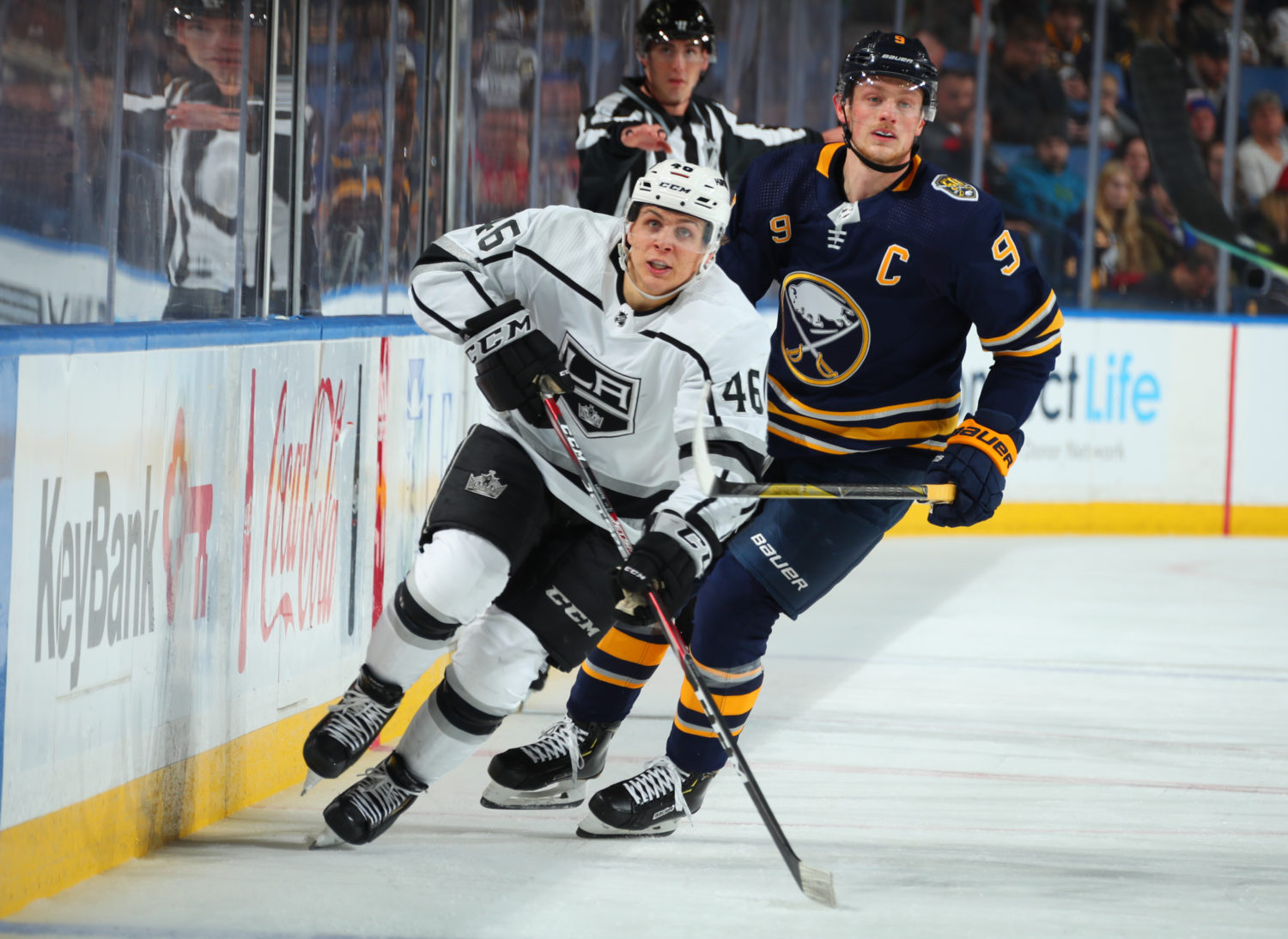 Todd McLellan on tonight’s game, and the roadtrip as a whole
We’ll deal with this one first – Effort was there, pretty evenly played game, it could have went to either side. Both teams hit a few posts, there were moments where we checked really well, moments where they did. They got a break that went off Doughty’s pad and into the net and we didn’t earn one of those, so at the end of the night, we come out at the short end. Not disappointed in the effort or what was put into the game, we’re obviously hoping for a better result, but the trip as a whole has been a pretty successful one for us. Now, we’ve got to get on that plane and rest, take tomorrow to breathe again and play against a real good team.

On if he felt that the Kings could have had 2 or 3 early on, when they only scored the one
Sometimes it feels that way. Tonight was, like I said an even game. We had some possession time, they rang a couple off the post, to me there was no defined territorial advantage to one team or the other. It was evenly played, both teams played well it was a well-played game. Our power plays, we didn’t really get a chance to get them going, they were in pieces, but so were theirs. I can’t think of anything that would swing one way or the other, other than a bounce off a pad.

On Kale Clague coming into his NHL debut and playing his game
I liked the fact that he had the courage to bring his game to the arena, that’s the type of player that he is. He uses his legs, he’s able to jump up and create, he knows his strengths and weaknesses and he was able to check using those, so it takes a lot of courage to play your first game in the league and I thought he brought his skill set. We’re really happy for him.

Drew Doughty on tonight’s game and the trip as a whole
I mean, I know we’re just trying to be positive, but I think that we blew last game and I think this game was there for the taking. I didn’t like our effort in the second period again. Yeah, I think we got points in every game except for one, so I mean that’s really positive, but I would have liked to see two points in a couple of the other games and I would’ve liked to see two points tonight. I don’t know, it’s a little bit frustrating. We need to learn to play with a lead and we need to play desperate when we have the lead and we were just punting pucks out of the zone…I’m more so talking about other games other than tonight, but tonight I think we could have won this one if we had played a little better overall.

On if it felt like the Kings could have had a few goals in the first period, early second period
Yeah, yeah. I thought we could have had the lead after the first, and yeah we had some early chances and then they kind of took over. From after the first five minutes of the second period, they outplayed us, I thought and then we didn’t start playing until the last five or ten minutes of the third. That’s why we lost.

Kale Clague on how the first one felt
Obviously, like you said, would prefer the win, but personally I thought I played well. I thought I was moving pucks well, skating well, some good o-zone chances, which I was happy about. I just want to keep building off of it.

On his pairing with Sean Walker
It was good. Before the game, when I knew I was going to be playing with him, I thought we’d compliment each other well in terms of breaking pucks out and moving the puck. I thought tonight we did that. I thought, when we had the puck, we were really effective, so he’s fun to play with and I thought it went well.

On how the reality of his NHL debut compared to the dream
Yeah, it was cool, it was really cool. Like you said, I’ve been waiting my whole life, dreaming of this. It was cool to get the first one out of the way and now I just want to continue to get better and build off of it.

Postgame Notes
— With the defeat, Los Angeles fell to 46-60-21 all-time against Buffalo, a record that includes a road mark of 17-34-12. Today’s game concludes the season-series between the Kings and Sabres, with LAK finishing 0-2-0.
— With the loss, Los Angeles fell to 5-6-2 against the Eastern Conference, 3-4-2 against the Atlantic Division, 8-6-4 in one-goal games, 13-5-3 when scoring first, 4-4-2 when tied after one period, 0-17-1 when trailing after two periods and 4-3-2 when outshot by their opponent.
— The Kings saw their five-game point streak come to an end today in Buffalo. The five-game run was the team’s longest since an eight-game road point streak during the 2017-18 season, which ended on March 22.
— The Kings scored first for the eighth consecutive game dating back to December 7 vs. Calgary
— Defenseman Kale Clague amassed 17:57 of ice time in his NHL debut and attempted three shots (2 blocked, 1 missed)
— Forward Adrian Kempe scored for the third consecutive game, dating back to December 17 versus Boston. Kempe’s 18:28 of ice time was his third highest total of the season.
— With an assist, Buffalo forward Jack Eichel now has collected a points in his past 18 games played. Due to missing Buffalo’s most-recent game with an upper-body injury, the NHL does not recognize Eichel’s scoring streak as continuing to 18 games.
— Forward Nikolai Prokhorkin played an NHL career-high 17:24 in tonight’s loss.
— Forward Trevor Lewis suffered an upper-body injury in the first period and did not return to the game.
— Los Angeles attempted 56 shots (27 on goal, 17 blocked, 12 missed). Buffalo attempted 42 shots (29 on goal, 5 blocked, 9 missed). Nikolai Prokhorkin (LAK) and Kyle Okposo (BUF) led the all skaters with four shots on goal, while Ben Hutton and Dustin Brown led the Kings with six shots attempted apiece.
— The Kings won 30-of-48 faceoffs (63%). Michael Amadio won 4-of-4, Anze Kopitar won 9-of-18, Blake Lizotte won 5-of-8, Jeff Carter won 7-of-12, Dustin Brown won 1-of-1 and Nikolai Prkohorkin won 4-of-5.

The Kings are scheduled to fly home to Los Angeles following today’s game. The team is not scheduled to practice tomorrow, and is back in action on Monday for a morning skate at TSPC, before taking on St. Louis.