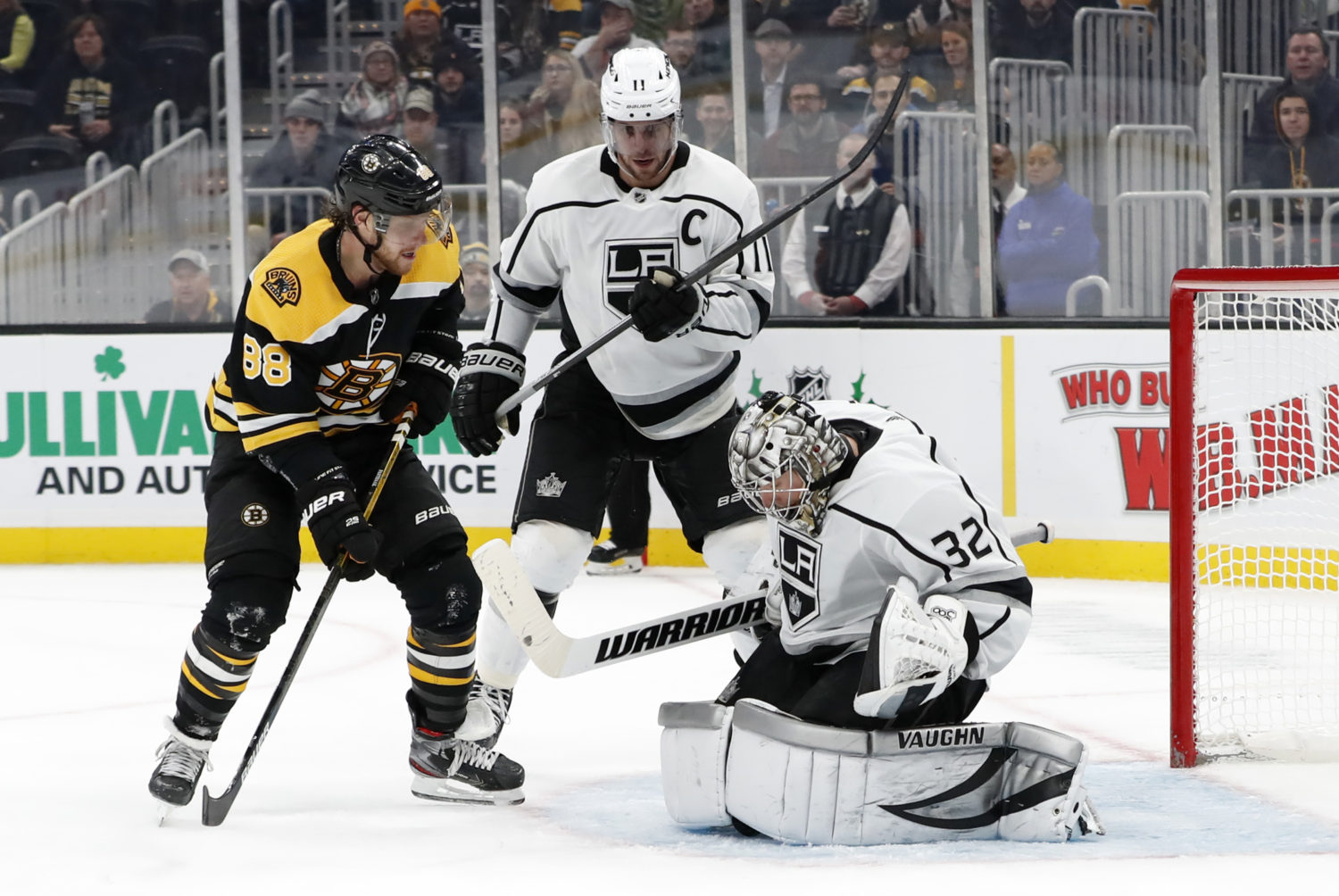 Todd McLellan on tonight’s overtime victory
I couldn’t be happier for the guys. They had to put a lot into that game to win, to stick with it to the bitter end and there’s a lot of happy Kings in the locker room after, they deserve to celebrate around each other. It’s not an easy place to play, not an easy team to play against, not an easy comeback. To think that we’re a minute away from not getting any points, based on the type of goal they score to go ahead was a little disappointing, but hard fought game. We needed everyone to dig in – I didn’t think our team energy level was as high as it needed to be, but I’m not sure if that was us or how hard they check as well.

On the resolve of the Kings, being outshot and winning the game in a different way
Well, it starts with goaltending. Jonathan was tremendous, he made some outstanding saves. We still checked pretty well, some of their shots were point blank and when they were, they were stopped by Quickie. The fact that we have developed some resiliency within the locker room that’s a real good sign, but it doesn’t surprise me that it’s in there. It’s a trait that’s been a part of this organization for a long time and every now and then it rears its head. New players here, it’s something we can build off of.

On how to best learn to play against a tight-checking team like Boston, over time
Well, there’s no better experience than game experience. To play on the road against that type of team is really good for us. We mentioned that to the players before, we’re really excited to see where we’re at. They still push every team, they have an opportunity to win every night. Faceoff circle is a big part of the game and they were very strong in that area, so we didn’t start with the puck much, but going back to your question, it was good for us to play in that game. Really good.

On winning the special teams battle tonight, and Blake Lizotte’s contribution on special teams
Well, huge. There’s not a lot of nights this season where we’ve won the special teams battle and to do it against that type of team is real important. To think, the only opportunity we had on the power play was a too-many men call a minute into the game, but we capitalized and it was good. Blake, as usual, had an impact on the game and finds a way to do that nightly.

Anze Kopitar on the resolve the team showed in the third and what it says about the Kings
I mean, you think about the score, it’s 2-2 after two periods, you’re playing obviously a very, very good game in Boston and you’re on the road, so there’s nothing to be discouraged about. We went out, they got on the board early, but we just kind of hung in there, hung in there and it was obviously a good shot from Royzie and we’re able to tie it up and then eventually win it in OT.

Kopitar on winning a game in that way and showing a different side to the team
That’s the thing, you can’t get discouraged. Like you said, you look at the shots and they’re up by quite a good margin, but we just kept playing, kept plugging away and at the end of the day it worked for us.

On the conversation on the bench during the third period when Boston started to control the shots on goal margin
Just to kind of stick with it, really. Like you said, they have some really good players over there that are going to make some plays. We cannot get down by it, cannot get discouraged. If anything, we push back and try to stick with the system and we did.

On Quick’s play in the third and the importance of just hanging down the stretch
Right. I mean, the Bruins are a good team, they’re allowed to make plays and have scoring chances. You need to come up with some saves and some plays and Quickie did that for us and he’s done that all year. He’s been great for us, especially these last five, six, seven games, he’s been great. It’s huge for confidence having him back there and even Jack Campbell, when he’s played he’s played stellar. On the back end, it’s great having two goalies like that.

On if having those two goalies changes the team’s play at all
I don’t know if it changes, but you play with a little bit more confidence in the d-zone, a little more moxie if you will. Knowing that they’re a calm presence back there just settles the game down, especially in the d-zone. You can’t get running around and feel panicky, so having two guys back there who are calm and can control the game is huge, it helps you settle down in the d-zone for sure.

Postgame Notes
— With the win, Los Angeles improved 44-85-15 all-time against Boston, a record that includes a road mark of 18-48-7 and an OT record of 9-7-8. The two teams will meet once more this season, on March 19, 2020 at STAPLES Center.
— With the win, Los Angeles improved to 5-5-1 against the Eastern Conference, 3-3-1 against the Atlantic Division, 4-3 in overtime, 8-5-3 in one-goal games, 13-4-2 when scoring first, 4-3-1 when tied after one period, 5-2-2 when tied after two periods and 4-2-1 when outshot by their opponent.
— The Kings have now collected points in four consecutive road games for the first time since Feb. 4 – 9, 2019, and five games in total.
— Tyler Toffoli has now collected points in five consecutive games, his longest scoring streak of the season. Toffoli has seven points (3-4-7) in total on the streak
— Anze Kopitar’ has now scored in back-to-back games and the game-winning goal was the 52nd of his NHL career.
— Jeff Carter’s has now collected a point in four straight games, dating back to Tuesday in Anaheim. Carter has three points (2-2-4) over that stretch, his longest scoring streak of the season.
— Forward Blake Lizotte collected the second multi-point game of his NHL career with a goal and an assist (First 11/9 vs. MTL)
— Adrian Kempe’s shorthanded goal in the second period was the third of the season for the Kings and the first of his NHL career.
— Los Angeles attempted 46 shots (27 on goal, 10 blocked, 9 missed). Boston attempted 73 shots (48 on goal, 10 blocked, 15 missed). Matt Roy led the Kings with five shots on goal, Joakim Ryan led the Kings with seven shots attempted and Charlie McAvoy led all skaters with six shots on goal and eight shots attempted.
— The Kings won 26-of-69 faceoffs (38%). Michael Amadio won 2-of-2, Anze Kopitar won 15-of-31, Blake Lizotte won 2-of-11, Jeff Carter won 3-of-13, Adrian Kempe won 2-of-3, Trevor Lewis won 1-of-2 and Nikolai Prkohorkin won 1-of-7.