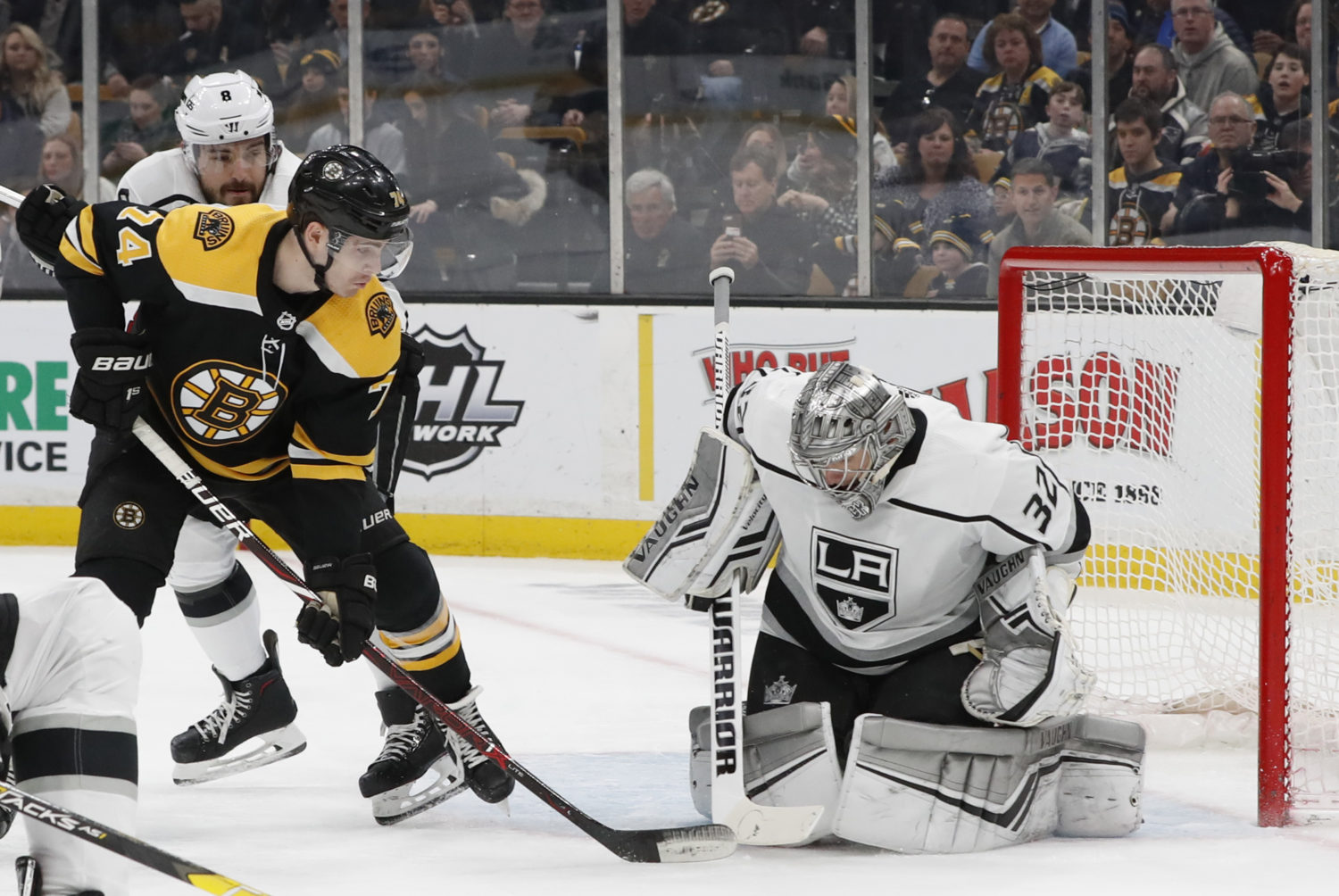 KINGS VITALS: First off the ice this morning was goaltender Jonathan Quick, who is expected to re-take the net this evening in Boston. Quick is 10-5-1 all-time against the Bruins, with a 2.08 goals against average and a .928 save percentage, his fourth highest SV% against any NHL opponent. On late for the Kings were forward Matt Luff and the newly recalled defenseman Kale Clague, along with goaltender Jack Campbell, which indicates that the group of 18 that played against Detroit could remain unchanged for tonight’s action.

As noted, no changes to this lineup are expected versus what the Kings used in Sunday’s win over Detroit. Kings Head Coach Todd McLellan was happy with how his team played in that game, for the most part, as the group prepares for a new type of challenge tonight in Boston.

“The group played strong structurally, we got good effort from all four lines and the six defensemen, goaltending was pretty solid,” McLellan said after today’s morning skate. “Really, that game was the type of game we’d like to play every night, less maybe the five, six, seven minutes in the third period where we got a little loose and reckless, but we’re still going to learn those lessons as we go forward. I think we’re dealing with a different situation here tonight. Obviously, this team is elite, one of, if not the best [team] in the league right now, certainly strong at home. I think the test comes at a real good time for our team and anxious to see how they perform.”

Tonight’s opponent being amongst the NHL’s elite does not change the approach for the visitors. Despite the Bruins being one of, if not the best teams in the NHL (more on that below), the focus on the Kings side is to try to keep doing what they do. McLellan stressed that note when asked if anything changes when facing an opponent that plays this well at home.

“Just doing our own thing,” McLellan said. “We’re feeling good about ourselves right now, but that doesn’t get you much unless you put it back on the ice again. You can’t worry about what they have done or what they haven’t done, at home or on the road, we have to prepare to play and I think any coach that comes into this building will tell you that everybody has to be playing at the top of their game to have a chance at success. We’re going to throw that out to the group, challenge them to bring their best and we’ll see what happens.”

BRUINS VITALS: No team in the NHL has lost fewer games at home in regulation this season than the Boston Bruins. Boston is 12-1-5 on home ice, tied with the Minnesota Wild for fewest home regulation defeats this season. Combine that with a solid road record, and Boston has strode out to a nine-point lead atop the Atlantic Division, along with the NHL’s best goal differential on the season (+29).

That being said, Boston has not been on fire as of late – The Bruins have played middling hockey (5-4-1) in their last 10 games, record wise, and snapped a five-game losing skid on Saturday against Florida. For Boston, it will likely be Tuukka Rask between the pipes tonight and per Head Coach Bruce Cassidy, Boston is expected to roll with the same lineup as it used on Saturday against the Panthers, a 4-2 victory. Boston’s practice yesterday showed the top line of Marchand – Bergeron – Pastrnak, as per usual, with these lines also used this morning.

“Bergeron I think is the brain, he’s the conductor, he directs things and gets possession of the puck, “McLellan said when discussing Boston’s top line. “Marchand provides energy and the spark and then there’s the finisher [Pastrnak]. Three real good ingredients to have on one line and they play with confidence, they play at both ends of the ice. They’re a handful for any team, any line in the league and again, I’m excited to see how our guys play against them. It’s a good test for our older players, as well as our younger players.”

If Rask gets the nod, the goaltender is 5-3-1 in nine all-time appearances against the Kings, with a 2.37 goals against average and a .922 save percentage. Boston did not hold a morning skate today, so the lineup won’t officially be confirmed until closer to game time, but below is how the Bruins set up at yesterday’s practice.

“The Other Guys”
The Kings defensemen, behind Drew Doughty, have had their ups and downs this season, but on any given night, several of those blueliners have stepped into bigger roles, covering when perhaps a teammate has an off night.

This flexibility allows to things to remain fluid at times. Behind Drew Doughty, who leads the NHL in ice time, the Kings have seen five different defensemen (Joakim Ryan, Ben Hutton, Matt Roy, Sean Walker and the currently injured Alec Martinez), play more than 20 minutes in a game and outside of Martinez, all four of the others have also had games with less than 15 minutes of ice time.

What that shows is depth. It shows that the same guys don’t have to be leading the way on a night in, night out basis.

That’s not to diminish the importance of Doughty, who Hutton referred to as the “anchor” and “leader” of the Kings group of defensemen. At 25:50 per game, no player in the NHL plays more on a per-game basis than Doughty does and his importance amongst the defensive core does not go unnoticed by his teammates.

“Yeah, I mean obviously he’s one of the best defensemen in the world,” Ryan said. “Any time you have someone like that on your team and on your d-core, it takes the pressure off the other guys and he brings us a great game every night. It’s nice having him back there.”

Ryan is currently paired alongside Doughty and the two have seen an extended run together as of late, including all three games thus far on the current road trip.

“He’s made it very easy on me, I think we read off of each other well, we think the game pretty similarly,” Ryan said. “We’re always supporting each other. If I’m in trouble, I know he’s going to be behind me to support me and same goes for him. I think we just try to keep it as simple as possible and when you do that, it makes things a lot easier.” 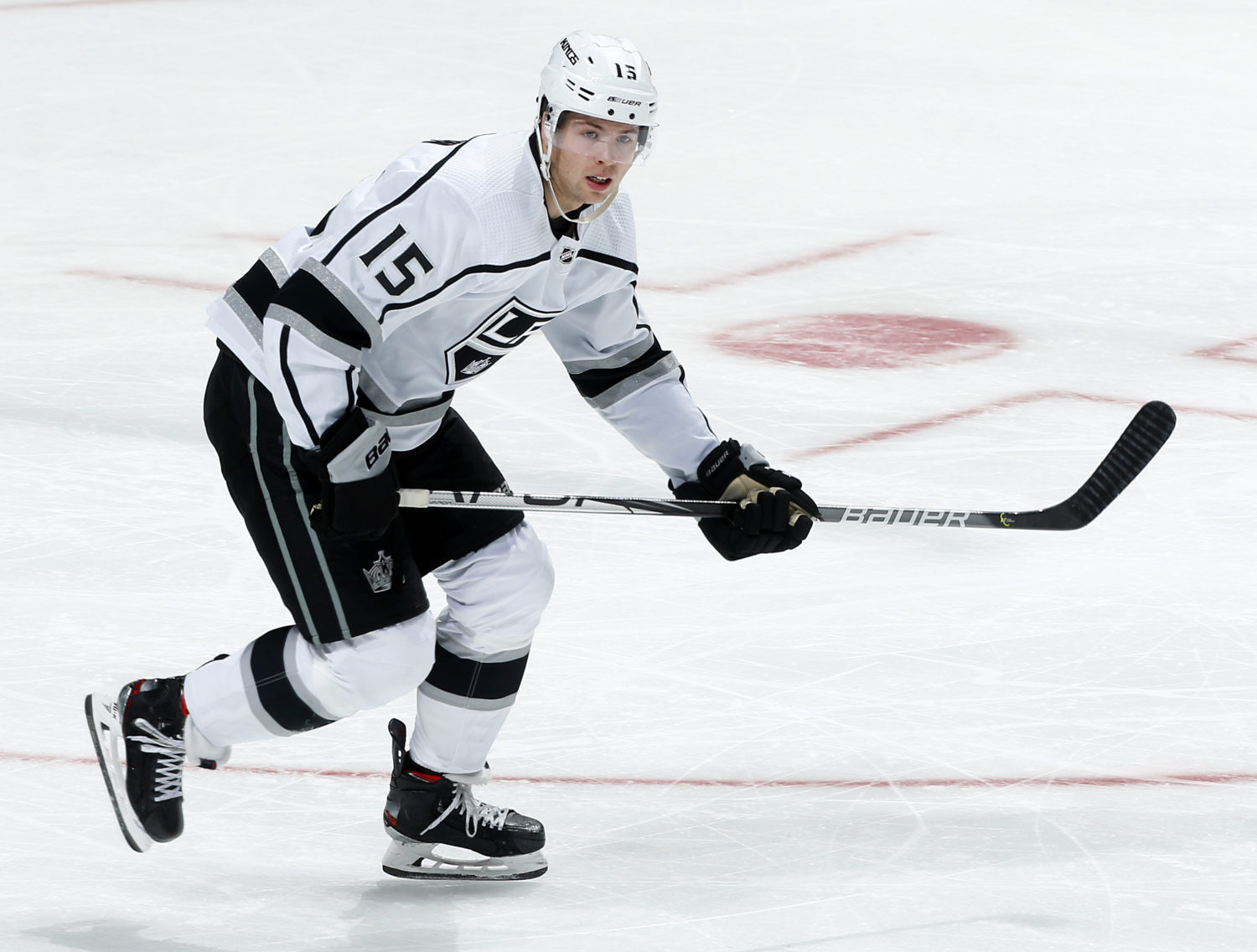 ANAHEIM, CA – DECEMBER 12: Ben Hutton #15 of the Los Angeles Kings skates during the game against the Anaheim Ducks at Honda Center on December 12, 2019 in Anaheim, California. (Photo by Debora Robinson/NHLI via Getty Images)

Walker, Hutton and Martinez have also had looks with Doughty this season, and the Kings have utilized several combinations on the backend to find what works best. Hutton believes that it speaks to the versatility that is present in this group.

“That’s how it’s been going so far,” Hutton said, when asked about the ability of the Kings’ blueliners to play in a variety of different pairings. “You come to the rink sometimes and you have a different partner and nobody has ifs, ands, or buts about it. It’s ‘okay, we’re going to battle with this partner tonight and that’s fine, everyone can play with everyone,” which is nice.”

Ryan echoed those sentiments – “I think anyone can play with anyone, really.”

Last game against Detroit, it was a by committee approach offensively. In Pittsburgh, Walker stepped up with two points. Roy two games before that. Depending on the night, it could be a different player stepping into the spotlight and that’s just fine with this group of blueliners.

“We all feel that on any given night, we can all set up and play big roles, play big minutes,” Hutton said. “Everyone can contribute all over the rink – offensively, defensively, breaking the puck out, everything. I feel our d-core’s pretty deep that way, which only helps, where if one guy is having an off night, the next guy can step up and help him out.”

Defenseman Kale Clague joined the Kings this morning and skated with the group for the first time. Clague was recalled from the Ontario Reign yesterday and linked up with his new teammates for morning skate at TD Garden.

Clague collected eight points (3-5-8) over his last nine AHL games played with Ontario and ranks tied for second in the AHL in goals (6) by a defenseman this season. At the time of his recall, Clague led all Reign defensemen in goals, assists (9) and points (15) on the season, and ranked second on the team amongst all skaters in points.

Clague is not expected to make his NHL debut tonight in Boston, but stay tuned later this week to hear more from the rookie blueliner.