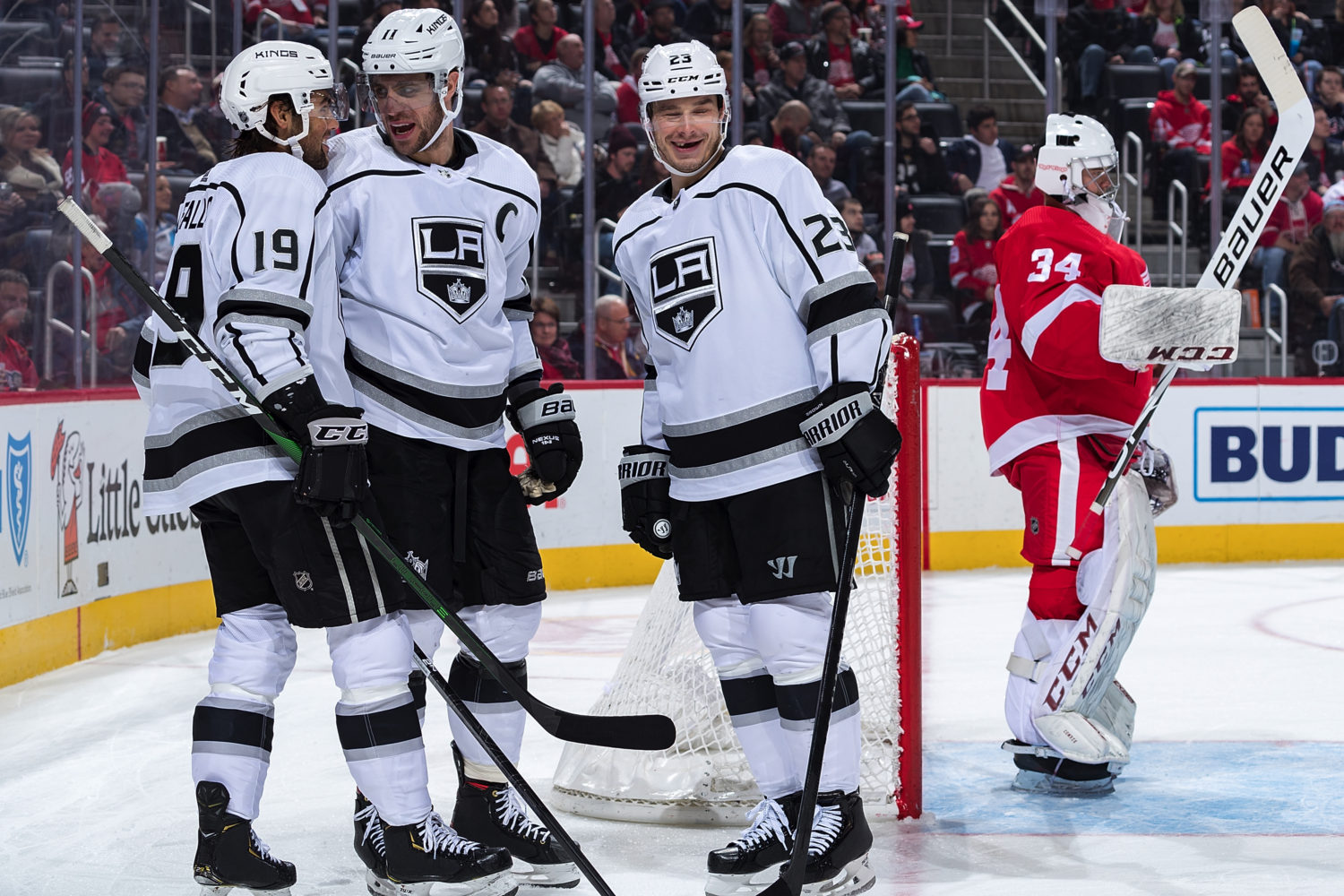 Todd McLellan on what impressed him from tonight’s win
Well, we got off to a good start and we pushed a team that played last night, checked very well, we had real good structure throughout two periods. I thought near the end of the second, we got away from it a little bit and I think there’s always lessons to be learned. We haven’t been in that situation a lot, where we have a three or four nothing lead and we’re still learning how to play in that situation. We took our foot off the gas a little bit. The win is great, the opportunity to learn from it is even better. We’ll get some rest now, because we need it, big game coming up.

On the team’s better starts as of late
You know, I’m asked that question because of the score. Sometimes, you start and you play well and the other team scores and all of a sudden, you get a question about the effort or the input into the game. I think, for the most part this season if we evaluated the 34, 35 games, I think we’re on the positive side of good starts and coming out and trying to establish our game and the way we want to play. Sometimes, we’ve been scored on and we fall behind, but that’s not because of the effort we’re trying to put into the game. This start tonight, the start in Pittsburgh, even in Anaheim, they were good nights. We need that on the road and certainly we’re going to need that in the next building we go to.

On Kopitar surpassing Gretzky’s total in all-time Kings scoring
I think it’s great. I remember Anze coming into the league and being a young guy and people were wondering was he picked at the right spot. Four or five years later, practically everybody is going “jeez, I wish we would’ve picked him.” He’s been that good ever since. What impresses me the most is the way he carries himself around his teammates. They always come first, he’s not a selfish guy, he plays the defensive side of the puck as well as he plays the offensive side. To hear him be talked about in the same name as Wayne Gretzky, that’s a great thing.

On the tic-tac-toe goal from Toffoli – Amadio – Prokhorkin
It was [a pretty nice passing play]. Pro has that in his game, he has great vision, I think he sold the shot. Mads did a real good thing in the neutral zone, to stay over a bouncing puck and keep the play alive and Toff has the hands to finish. They were rewarded, I thought that line had a good night.

Anze Kopitar on the team’s faster starts as of late
Yeah, we realized especially on the road, we’re going into a hostile environment, where teams are ready to rock, so you’ve got to match their intensity. I think, for the most part, we did a pretty good job of keeping it all in front of us and really going after them more so and creating chances off of that.

On his line and chemistry with Iafallo and Brown
Well, now it’s nice because we’ve been together for three years now, so the chemistry’s there. There’s a few games, the past few games, where we were just a bit off, we were generating some chances, we just couldn’t get on the scoreboard. It was nice to see.

On the team’s high shot volume as of late and generating second opportunities
I mean, there’s not very many goals that are going to be pretty goals, so it’s shooting, trying to create second chances and go to the net and see if there’s anything laying around.

On passing Wayne Gretzky on the King all-time list, and if it’s kind of cool any time you can pass someone like Gretzky
I mean, he probably did it in 400 games, it took me a little bit longer [laughs]. Yeah, whenever you’re mentioned in the same sentence as Wayne, it’s obviously a pretty big deal. Maybe I can brag about this one for just a little bit….I don’t think I’m going to touch any of his other records. [Reporter: I mean, he can’t pass you back.] No, he can’t pass me, not here.

Jack Campbell on getting a win in his first start in his home state of Michigan
It’s really special. I know Royzie and I, it was our first game in Detroit, so just thinking of all the memories coming here, well to the Joe, and watching, whether it was college hockey or the Wings, it was pretty cool to be out there today and more importantly get a big win. That’s huge.

On the spells when he didn’t have a ton of action, and how he stays sharp in those situations
I’m still working on that. I just think it’s a matter of just reiterating your details and in my head, I say a few things to myself to make sure I’m still structurally on point. Then, when the time comes to make the save, that’s the fun part, so it’s fun when the team’s playing that well though for sure.

On the two-pad stack in the second period
Whew, it happened so quick I don’t even really know what it looked like to be honest. I just tried to battle and make the save and it worked. I’m kind of excited to see what I did, but if there’s something I can correct on that too, we’ll do it.

On how good the team was in front of him in the first two periods
They were outstanding. Even in the third, Detroit’s got a lot of great offensive players, and you knew they’d make a push. I still thought our guys played well and we just played so well and we’ve got to keep that going, a big one against Boston coming up.

Postgame Notes
— With the win, Los Angeles improved to 89-83-32 all-time against Detroit a record that includes a road mark of 37-48-17. Tonight’s meeting concludes the season series between the two teams.
— With the win, Los Angeles improved to 4-5-1 against the Eastern Conference, 2-3-1 against the Atlantic Division, 3-5-0 in two-goal games, 12-4-1 when scoring first, 11-2-0 when leading after one period, 10-0-0 when leading after two periods and 10-15-1 when outshooting their opponent.
— The Kings have now collected points in three consecutive road games for the first time since Feb. 4 – 7, 2019.
— Anze Kopitar’s two-goal game was his first of the 2019-20 regular season and his first overall since February 28, 2019 vs. DAL.
— Tyler Toffoli has now collected points in four consecutive games, his longest scoring streak of the season. Toffoli has goals in three of those four games, and six points (3-3-6) in total on the streak
— Alex Iafallo collected two points in a game for the fourth time this season, and two assists in a game for the second time (11/25 vs. SJ).
— Jeff Carter has now collected a point in three straight games, dating back to Tuesday in Anaheim. Carter has three points (2-1-3) over that stretch, his first scoring streak of the season.
— Los Angeles attempted 54 shots (32 on goal, 13 blocked, 9 missed). Detroit attempted 38 shots (24 on goal, 8 blocked, 6 missed). Jeff Carter led all players with six shots on goal and eight shot attempts.
— The Kings won 28-of-53 faceoffs (60%). Michael Amadio won 2-of-4, Anze Kopitar won 12-of-17, Blake Lizotte won 4-of-10, Jeff Carter won 4-of-12, Adrian Kempe won 0-of-1, Trevor Lewis won 1-of-1 and Nikolai Prkohorkin won 5-of-7.

The Kings are scheduled to fly to Boston tonight following the game. The team is not expected to skate tomorrow in Boston, and is expected to return to the ice for a morning skate on Tuesday.