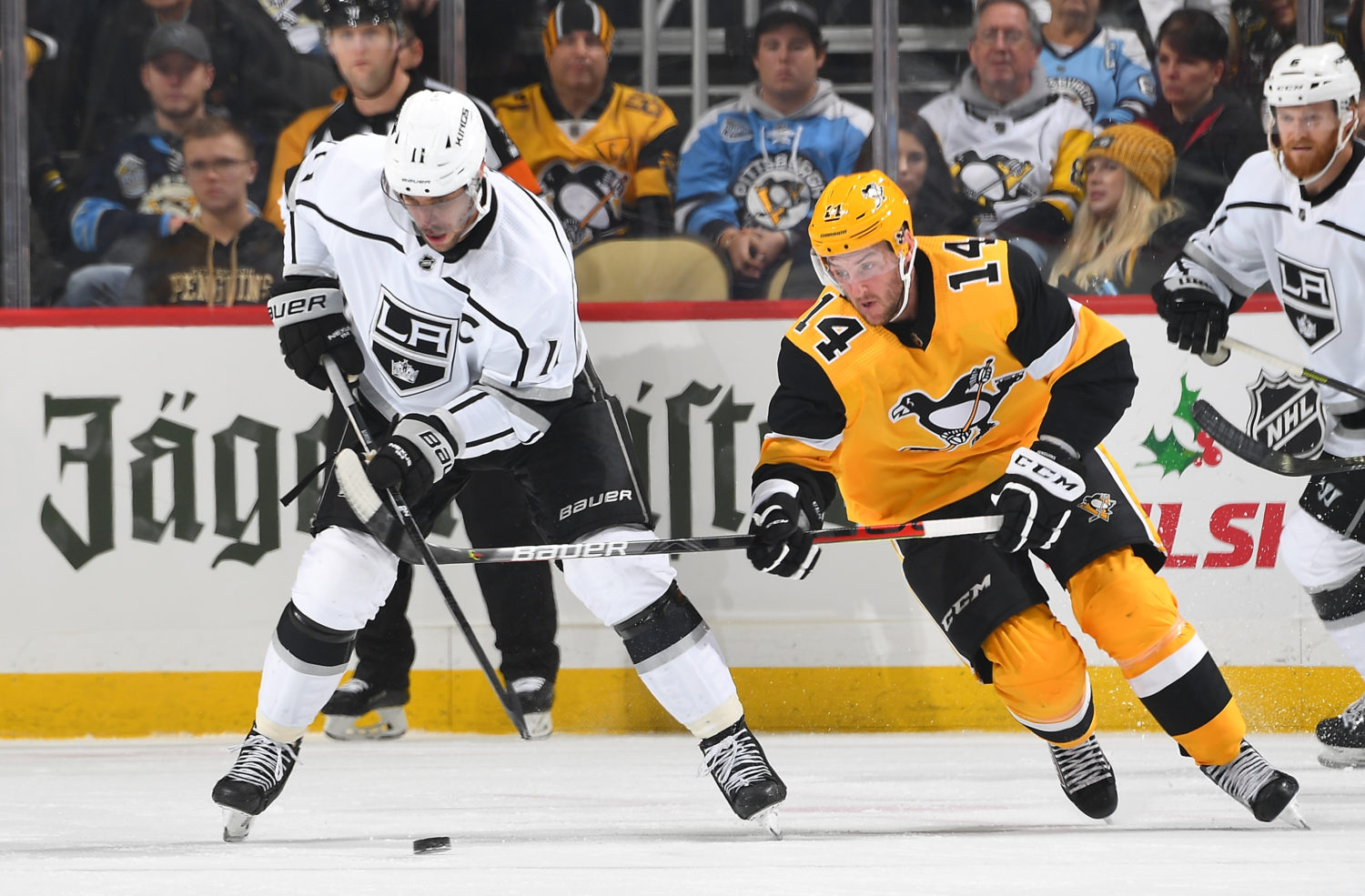 Todd McLellan on a game that seemed to have it all and his take on it overall
I think you summed it up pretty well, it had a little bit of everything. Good start, we got into a little bit of penalty trouble, they clawed back as we expected, they’re very scrappy, competitive team, they don’t go away, but nor do we and we talked about that in between periods. We’ve got to respond a little bit here and push and I thought we did that late in the third, we didn’t go away. We get to the shootout and anything can happen there. We didn’t get too many good looks or shots off in the shootout, so that was a little disappointing and you can throw the penalty shot in as well. Chalk it up to their one special teams goal, or the shootout, I include that in the special teams and they were a little bit further ahead of us in that situation.

On what he felt the Kings did to generate offense tonight
We are a volume shooting team, and we take a lot of shots. They’re not always high danger shots, but we believe that leads to the second and third opportunities and rebounds and Clifford’s goal was a prime example of that, where we get it to the net and they have to respond to a rebound. That was part of some of our attack plan, but that’s how we’ve played and we’ve done that to a lot of teams. We just have a tough time finishing on a regular basis.

On if he was happy with the team’s 5-on-5 play
I was. I didn’t think we were sharp in a couple situations, maybe offensively where we could have finished some good rushes, or some plays in the offensive zone where it just kind of bounced around or we didn’t handle a pass properly. For the most part, a pretty honest effort from the guys. A little bit sloppy at times, defensively – You look at the 4-on-4 goal, we could have done a better job there, but for us to come into this building, where they’ve played really well, they’ve played exceptionally well as a team, to push a great goaltender like that, a guy who’s as hot as anybody in the league into a shootout, we’ll take it.

On how Adrian Kempe responded to the hit on Blake Lizotte
Well, we’re a team. We stick together, I don’t think anybody questions anybody’s will or desire to take care of teammates. The take care part isn’t always the physical part, it’s the emotional part, in the locker room when somebody’s up or down and away from the rink as well. It’s a pretty tight group that we have and I’m proud that they do those things. Not necessarily the fighting part, but the taking care of each other part.

Adrian Kempe on if there was a feeling of letting the Penguins back into the game at 2-0
I think we played a good game. Obviously they’re a good team, they have a lot of speed and a lot of skill in their team and obviously we have some chances in the game. I think we had a couple of penalties against us and they took advantage of that and came back in to the game. It was a tight game through the entire game I think, we did a real good job at the end coming back, I think we definitely deserved one point tonight.

On the resolve of the team, coming back to force overtime
For sure. I think lately, we’ve been playing good on the road. Maybe we haven’t gotten the results, especially when we played Calgary and Edmonton, but going into this game from last game in Anaheim, I think we played a good, solid game. I think we had a pretty good game tonight as well. They came back and then we came back again, it was a tight game, and it was a lot of fun to play in.

On the goal he created with Lizotte and Wagner, and their line using their speed
Yeah, I think it’s easy for me to have those guys on my line. It’s easy to make plays. [Lizotte] was good and Wags is always flying, so it’s pretty easy to play with them and we did a pretty good job tonight.

On his decision to step in and fight, after the uncalled boarding on Lizotte
I saw that Lizzo was down, I didn’t really see what happened so I just stepped in after that. I wasn’t sure exactly what happened, I just saw that he was down.

Kyle Clifford on the character the team showed in the third-period surge
I think everybody stuck in it, they stayed in it, they knew it was going to be a grind. I thought we played well enough to win and it was just an unfortunate turnout and we’ve got to get ready to tomorrow night.

On the game-tying goal, and what he saw on that play
It was just a…..Ammo was Johnny on the Spot, he’s played great all year. He anticipates those little plays and thinks the game real well.

On if he felt that the Kings controlled the play 5-on-5 and could have gotten the two points on a different night
I thought there were some areas that we could do better in, but we had a lot of scoring chances, what did we finish with, 45 shot or something like that? I thought, you look at Adrian Kempe stepping up there, that was huge of him, good character shown by him. I can’t praise him enough, that’s the type of stuff that builds championships. Team toughness and it’s not necessarily the fighting stuff, but it’s guys willing to stick up for each other and grinding for each other. [Reporter: It’s not so much the fight, right, it’s more seeing a teammate down and responding?]. Yeah, yeah, there’s a lot more to it than just the fight. The identity part is huge and I think any one of those four guys and Quickie would have jumped in and done the same thing, he was just first man on the spot. It’s encouraging to see and he’s a great teammate.

Postgame Notes
— With the shootout loss, Los Angeles fell to 76-61-24 all-time against Pittsburgh, a record that includes a road mark of 28-42-13, and an overtime/shootout record of 8-8-5. These teams will meet once more this season, on February 26 at STAPLES Center.
— With the SOL, Los Angeles fell to 3-5-2 against the Eastern Conference, 2-2-1 against the Metropolitan Division, 7-5-3 in one-goal games, 11-4-2 when scoring first, 10-2-1 when leading after one period, 4-2-2 when tied after two periods and 9-15-2 when outshooting their opponent.
— Forward Austin Wagner scored in the first period, and has now collected a point in both games played against Pittsburgh in his NHL career. Wagner’s tally also snapped a 22-game goal-less streak.
– Forward Tyler Toffoli (1-1-2) and defenseman Sean Walker (0-2-2) each collected multi-point games in the shootout defeat.
– Forward Matt Luff collected a point for the second consecutive game.
— Los Angeles attempted 70 shots (42 on goal, 16 blocked, 12 missed). Pittsburgh attempted 43 shots (27 on goal, 10 blocked, 6 missed). Blake Lizotte and Bryan Rust tied for the game-lead with six shots on goal.
— The Kings won 28-of-57 faceoffs (49%). Michael Amadio won 2-of-6, Anze Kopitar won 10-of-19, Blake Lizotte won 6-of-12, Jeff Carter won 8-of-15, Adrian Kempe won 0-of-2, Alex Iafallo won 1-of-1, Trevor Lewis won 1-of-1 and Tyler Toffoli won 0-of-1.

The Kings are scheduled to fly to Detroit tonight following the game. The team is not expected to skate tomorrow before a 7 PM faceoff against the Red Wings.