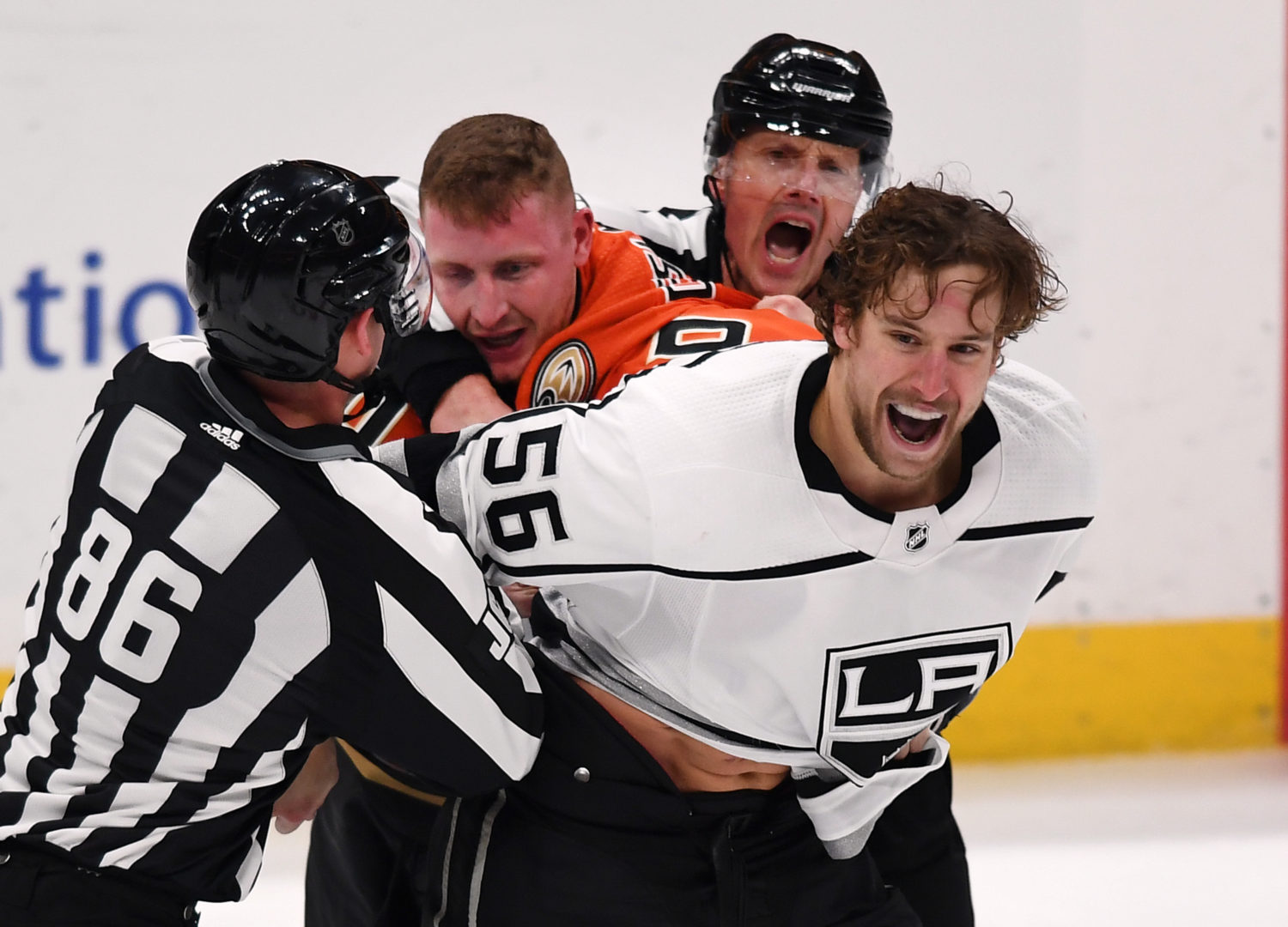 Todd McLellan, on the win:
One, it was on the road. It’s been said and written and talked about as far as road goes, a nd it was a good road win for us. Grind it out. The way we won was a lot more checking than cheating, which is always a good thing, too. We got a power play goal. I thought the faceoffs down the stretch after the first period went our way and we had the puck a little bit more than we did in the first and that helped us as well. Again, a good team effort, great goaltending. You need all those things to win, especially on the road.

McLellan, on the improvement compared to where the team was two weeks ago:
Well, two weeks ago I didn’t think we were that bad, either. Our game has improved incrementally and slowly but not dramatically over two or three weeks. We’ve been playing the same game, we just haven’t been getting the wins or a bounce here and there. Maybe now it’ll start to go our way, but I think the group is improved immensely from day one at training camp through the first four or five days in a lot of different areas, and we’re making progress. Finding some rewards every now and then with wins is always reassuring.

McLellan, on whether there’s motivation for scratches to do what they can to stay in the lineup:
I sure hope there is. Boy, if you get your foot back in the door, you better not relax or take any shifts off, and that doesn’t mean you have to go out and play nervous or afraid. Make mistakes, that’s OK, but do everything in your power to keep your spot in the lineup, and as I said before, guys don’t always come out because they’re playing poorly. We like to keep other players alive for a lack of better term. Rotate players in and out so they get to experience it. But Luffer held his own in practice. He worked hard and when his number was called he had a good night tonight.

Drew Doughty, on Jonathan Quick:
He played great. I didn’t think he had as much work tonight as he maybe did in the Rangers game. There were some bigger saves there. I thought that tonight was a whole team effort, but Quickie always plays solid and so does Soup. It’s about time we could win a game for ‘em.

Doughty, on his assist on Jeff Carter’s 5-on-3 goal:
It was just a big seam, and open seam. It was an easy play – great shot by Carts. He’s the one that made that happen. I don’t know how you one-time it from that kind of direction. It was a tough one-timer, so it was a great shot. [Reporter: Are you looking for that particular play like right when you get the puck, or off the faceoff?] Usually we just kind of go D-to-D and I give it down to Kopi and then we start our plays, and today I decided I was either going to shoot it or try to make a play, and then if nothing was open, I’d give it down to Kopi, so we changed it up a little bit.

Doughty, on whether the team is beginning to buy in:
Yeah, but we’re still not scoring enough goals. With two goals in this game in this league anymore, I mean, I know we did that in the past, but it was a 2-1, 3-2 league back then, and now it seems to be more of like a 4-3 league, s o we need to score more goals. Instead of it being 2-0 we’d have liked to get up 3-0 and then really put the game away, but at least we battled this out and got the win tonight. It’s better than letting the team back in it and having to go to overtime, which we had done in the past. [Reporter: And you’re not getting run out, either. I mean, earlier in the season there were some kind of lopsided games.] Yeah, we haven’t had one of those in a while. As much as we’ve lost a lot of games, we haven’t had any full, lopsided games at all, so I guess in a way, I guess we are happy with that. Even though we have too many losses, we’re improving all the time, everyone’s getting better individually and as a team. It’s exciting, but we’ve got a lot of work to do.

Doughty, on Kurtis MacDermid’s fight with Nic Deslauriers:
It was a good, safe respectful fight. The guys on the bench were pumped up. I’ll keep telling Dermie all night, you know, ‘great fight’ and whatnot. [Reporter: What does he say when you say that?] (Deep voice) Thaaaaaaanks.

Matt Luff, on what was missing from his game during his prior recall:
I just didn’t have the jump in my game. I thought I was slow, thinking a lot. I think now since I went to Ontario and Stutts kind of sat me down after the hiccup against Colorado and missing a game against Tucson, I’m just kind of refocusing myself. I think moving forward from that game was really good, so going down there early kind of was a statement, so I don’t really want that. I want to be a full-time player here.

Luff, on his confidence, and how it was affected by leaving the lineup:
It’s pretty good. I mean, it’s been a couple games since I’ve scored, especially going back to Ontario, so it was a nice weight off my back. But I think it doesn’t really matter. I think the big thing is we’re going to win, especially on the road here. Especially going into a big travel week, 10 days, it’s important to make sure we start off right here, and that’s a big two points. In and out of the lineup, I think it just takes a positive attitude and when I get my chance just keep working hard.

Luff, on whether it’s hard to be scratched when he’s might not be doing something wrong:
I don’t know. I don’t really take it to hard. There are a lot of guys here, a lot of good guys that should be playing, and if they’re not, and I’m not, I don’t take it to heart. It’s the NHL. I’m pretty happy to be up here whether I’m playing or not. Of course you want to be in the lineup, but if we’re not winning games, at the end of the day it’s about the team. If we’re winning, I’m out. I’ll just wait for my turn, and when I get in there, it’s just about winning games with these guys.

— With the win, Los Angeles improved to 64-53-26 all-time against Anaheim, a record that includes a road mark of 25-33-15. 20 out of the last 30 Kings-Ducks games have been decided by one goal. These teams have three games remaining: February 1 and March 14 at Staples Center and April 3 at Honda Center.

— Jeff Carter’s goal was his second goal and second point in his 16th road game. At home, he has seven goals and 11 points in 17 games.

The Kings are scheduled to fly to Pittsburgh Friday morning. No practice is scheduled at TSPC.