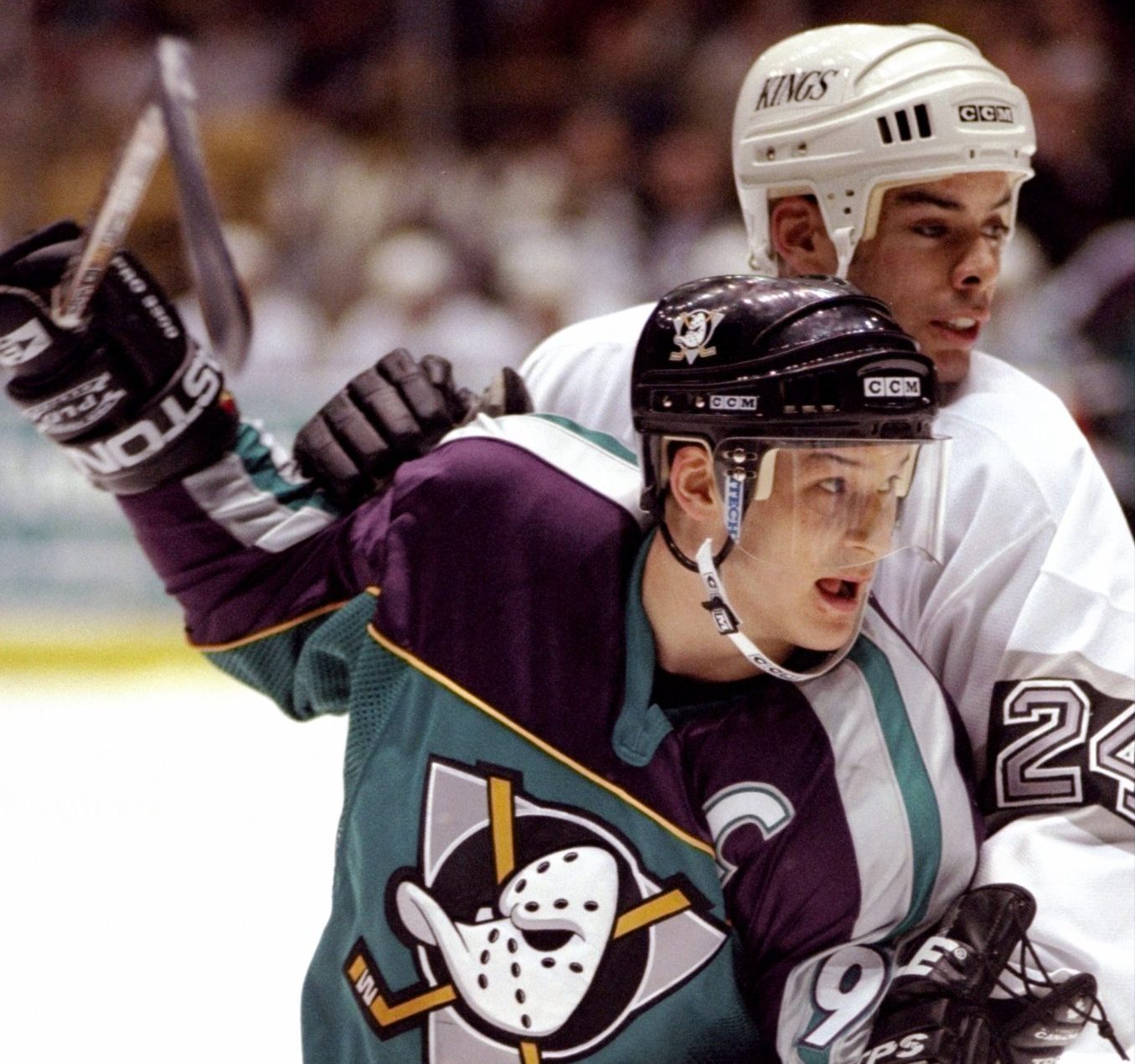 — The vitals: Bill Ranford skated in lieu of Jonathan Quick, and Jack Campbell remained on for some work with Paul LaDue, Ilya Kovalchuk and Nikolai Prokhorkin, so expect to see Quick in goal and the aforementioned skaters not in uniform. Quick is 21-12-8 in his career against the Ducks with a 2.48 goals-against average, a .906 save percentage and one shutout over 43 career outings. The shutout was a 4-0 Staples Center blanking midway through the 2009-10 season in which Michal Handzus, Scott Parse, Dustin Brown and Wayne Simmonds scored goals and Jonas Hiller got the hook. You know what season was fun? The 2009-10 season was fun. It’s almost time to commemorate the 10-year anniversary of the eight-game winning streak and the perfect road trip through Detroit, Toronto, Columbus, Boston and New Jersey. Might be time for Rich Hammond to drop some ’memberberries. Anyway, expect to see a similar lineup to the one used against New York two nights ago: Iafallo-Kopitar-Brown, Clifford-Carter-Lewis, Kempe-Lizotte-Wagner and Toffoli-Amadio-Luff up front with Ryan-Doughty, Hutton-Roy and MacDermid-Walker on the back end.

— Their vitals: No word yet on Anaheim’s starting goalie. John Gibson started both games of a two-game trip to Winnipeg and Minnesota, losing the first game and winning the second in a shootout while turning aside five power plays. Whether it’s Gibson (.935 Sv% in 15 career GP vs LAK) or Miller (.929 Sv% in 21 career GP vs LAK), it’s a goalie that’s had success against Los Angeles in the past, for whatever that’s worth. Josh Manson returned to play over 21 minutes against the Wild after missing the previous 19 games with a sprained knee. Nick Ritchie (IR / MCL sprain) has missed two games of what’s expected to be a 6-to-10-week recovery period after suffering a knee injury last week. After facing the league’s most frequent penalty box visitors on Tuesday, the Kings will face the second-most penalized team tonight. The Ducks rank 30th with an average of 12.5 penalty minutes per night, while the Kings rank 11th with an average of 7.7.

— It’s a delicate subject, because I don’t think it’s wise to excessively glorify fighting, nor would I want to any way affect a player on a morning day whose role that night might include a raised chance at fighting. I could never put myself in those shoes. Anyway, the Kings are playing the Ducks, the Ducks have ex-Kings farmhand Nic Deslauriers, and the Kings have Duck repellant Kurtis MacDermid.

That’s not entirely fair to MacDermid, whose game has grown beyond the boundaries of typical defensemen his size who are known to fight. He’s added layers as he’s become more comfortable and confident in the league, and as shared many times previously, he’s coachable, he’s honest, his family pedigree affords him a particular understanding of the game and the way it is played. Take stock of how he held up against Milan Lucic in Calgary last weekend – it was difficult to avoid hitting him from behind, but MacDermid did so.

And if we’re to talk about players who’ve adapted their game to an evolving league and did what was necessary to etch out a lasting career, Deslauriers is a fascinating study. The very first Kings story I ever published was about Deslauriers – thank you, Denis Fugere, for the great chat with someone you’d never met – and detailed his smooth skating and power play prowess as a puck moving defenseman. From the Q, he joined Manchester and became a power forward who poured goals into the net before he was shipped to Buffalo as part of the trade that netted Los Angeles Brayden McNabb. He appeared in 82 games with the Sabres the following season and another three years later joined Montreal, who shipped him to Anaheim shortly before free agency opened this past summer. If Deslauriers is in tonight, it’ll be his 337th career game, an impressive haul for someone who nimbly switched to defense in major junior and is now a heavy forechecker and willing combatant who has done what’s asked of him to reach the NHL.

It’s in the same realm of how MacDermid has adapted his game, and coincidentally, the two were roommates at a Kings training camp in 2013.

Even back then, while MacDermid was looking to continue to build his game as a young player and justify the entry-level contract he’d signed one year prior, he could sense the toughness inherent in the player who’d previously drawn major notice for his skill and skating but was just starting his transition back to forward, a position he hadn’t played since bantam. “I could tell,” MacDermid said. “I know he was a really good player and he had great skill and he’s a great puckmover. He has a little bit of everything in his toolbox.

“He’s a big, strong guy and gets along on the ice really well. Gets in on the forecheck, and I’ve seen quite a few of his fights. He’s a very good fighter and he’s got really quick hands and he strikes really quick as well, so he’s pretty technical that way. He’s had a few good ones this season, I’ve noticed.

— I’m going to try to get a Jeff Carter story out before warm-ups, but that might be difficult because this is a Thursday and I still have to drive to Anaheim. Lots more to come from beyond the Orange Curtain, where Tom Chmielewski and Chris Rooney are the referees and Jesse Marquis and Darren Gibbs the linesmen. Let’s talk soon, Insiders.

Back in the day @AnzeKopitar, @DustinBrown23 & Jack Johnson were big fans of recreating their big moments with their action figures. #GEICORewind | @GEICO pic.twitter.com/8c4sIFcMaM