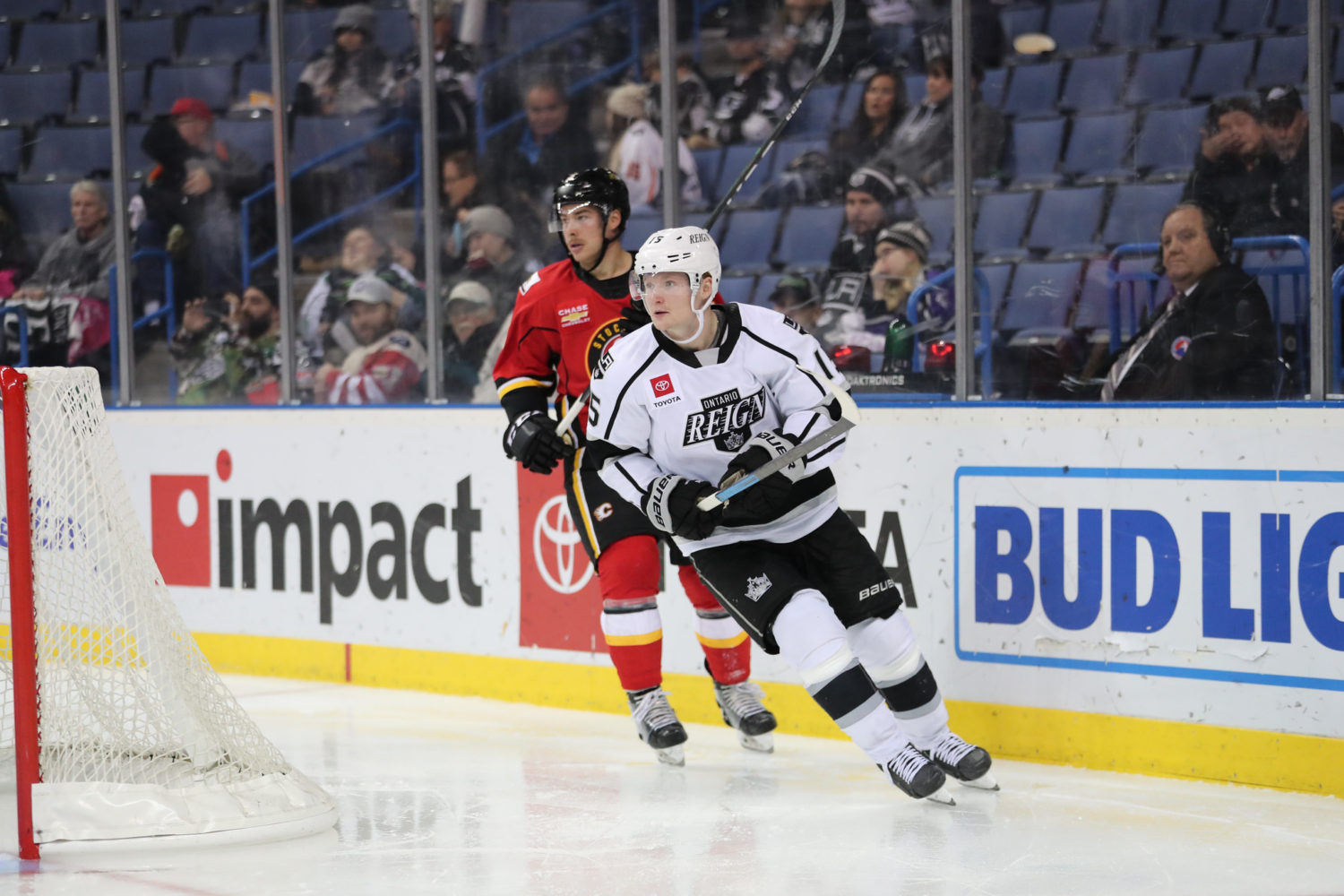 TONIGHT’S MATCHUP: The Reign take on the Stockton Heat for the third consecutive Wednesday, with tonight’s game in Ontario. Each team has won once over the last two weeks, with the Heat victorious on 11/27 at Toyota Arena and the Reign 3-2 winners last Wednesday at Stockton Arena.

WHAT TO WATCH FOR: The Ontario Reign are expected to skate in an 11-7 alignment tonight, with forwards Boko Imama, Drake Rymsha and Jacob Doty out late after morning skate today, along with goaltender Matthew Villalta. All seven healthy defensemen on the roster are expected to play, with goaltender Cal Petersen expected to start again between the pipes for the Reign, for the 24th time in 25 games.

MAMBO NO. 5 (STRAIGHT): The Reign currently in the midst of a five-game homestand, one of two slates this season with five straight games on home ice. Ontario began the stead at 1-1-0, as it split a pair of games last weekend at Toyota Arena against the San Jose Barracuda. Ontario’s 5-4 shootout victory on Saturday moved it out of the Pacific Division basement in home winning percentage, with the Reign jumping to a tie for fourth at .455 this season.

SHOOTOUT SUCCESS: Ontario played in a shootout for the first time this season, in Saturday’s win over San Jose. Forwards Gabriel Vilardi and Martin Frk scored for the Reign, while goaltender Cal Petersen did not concede either of his two attempts faced in the victory. Vilardi’s shootout goal was his first, on his first career AHL attempt, while Frk improved to 2-of-7 lifetime in AHL shootouts with his first tally since 2014.

GOALS, GOALS, GOALS: Reign forward Martin Frk scored for the third-straight game on Saturday, as he picked up the game-tying goal midway through the third period. With his three tallies last week, Frk now has 12 on the season, which ties him for eighth across the AHL in goals scored. Frk has amassed 18 points (12-6-18) from 20 games played to lead all Ontario players, and is also tied for the Reign lead with a +5 rating.

MADE IT OUT OF CLAGUE: Ontario defenseman Kale Clague set a season-high, and tied an AHL career-high, with three points (1-2-3) on Saturday. Clague now has 13 points (5-8-13) from 24 games played this season to lead all Reign defensemen, with his five goals tied for third in goals by a blueliner in the AHL this season. The second-year rearguard is tied for the overall Reign lead in assists (8) and ranks second in points (13) so far this season.

CATCHER IN THE RY: Ontario defenseman Ryan Stanton scored for the second time in as many games, as he found the back of the net in the third period on Saturday. Stanton’s tally was the Reign’s first of three third-period goals in the comeback win. The veteran blueliner scored his first goal in a Reign jersey in Friday’s defeat and now has four points (2-2-4) from 15 games played this season.

DON’T CALL IT A COMEBACK: The Reign overturned a three-goal deficit on Saturday, as they turned what was once a 3-0 San Jose lead into an eventual 5-4 Ontario shootout victory. The Reign won for the third time this season when conceding the game’s first, and won for the second time this season when trailing after the first and second periods respectively in their largest come-from-behind victory of the season to date.

SCOUTING THE HEAT: Stockton will be without its leading scorer in tonight’s game, as forward Matthew Phillips was recalled to the NHL by the Calgary Flames yesterday afternoon. Leading the Heat in active scoring is point-per-game center Glenn Gawdin, who has 22 points (8-14-22) from 22 games played, as well as team-leading goalscorer Buddy Robinson, who top the Stockton charts with 11 tallies on the season.