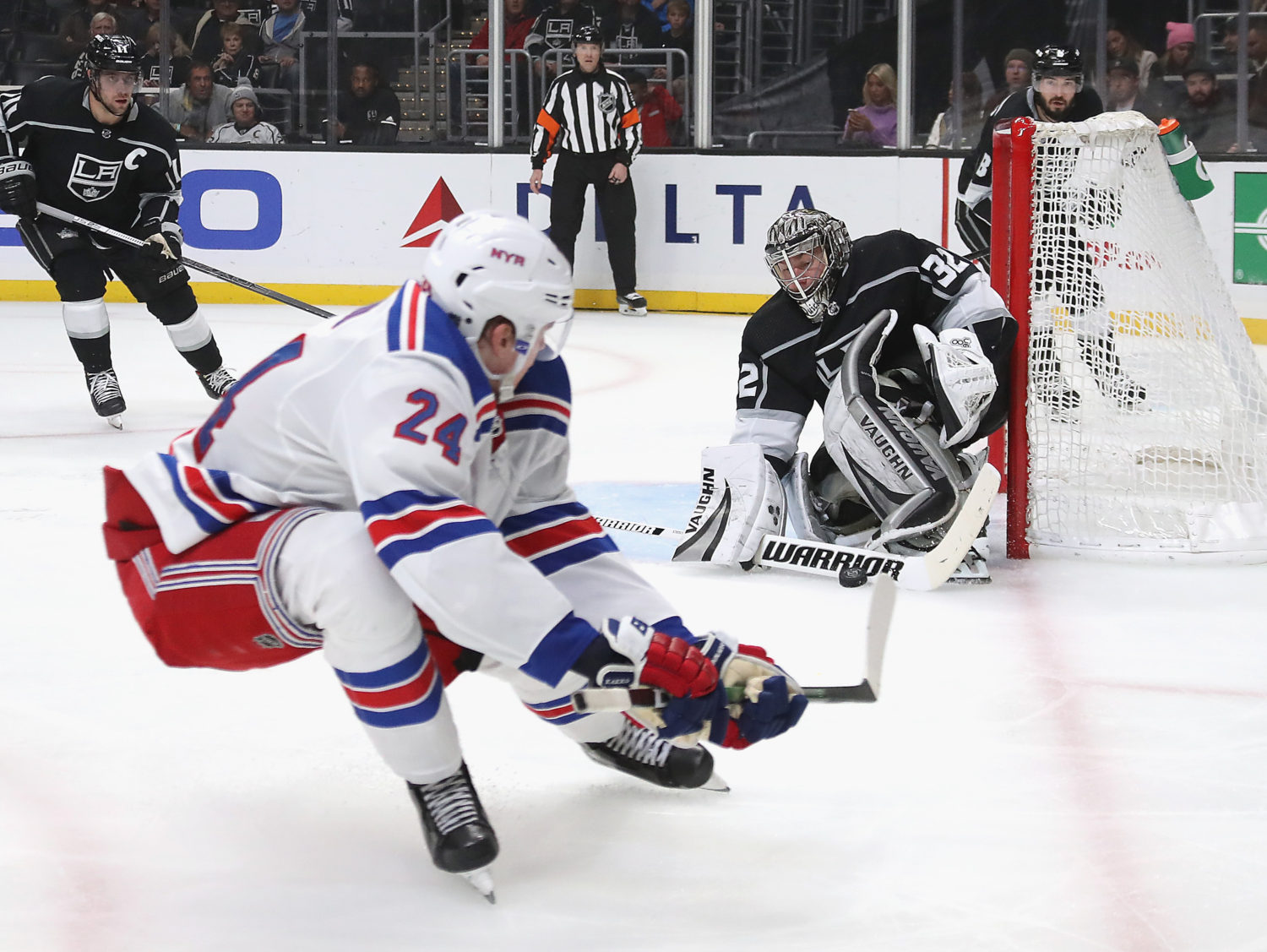 Todd McLellan, on the win:
Well, it was deserved. It wasn’t pretty by any means, but I think that’s how we have to win sometimes. We checked our butts off and got some really good goaltending when we needed it and earned some breaks at the other end. Also came out on the short end of some breaks. We hit some posts tonight that could’ve allowed us to have a little bit more of a cushion, but I thought down the stretch we really played well. We checked and did the things we needed to do to shut down a pretty good offensive team and play with a lead. If you refer back to early in the year when some leads got away on us, we’ve improved. We’ve moved the needle, so we’re happy with that.

McLellan, on Jonathan Quick’s performance:
It was essential. He made some early saves that we needed as we worked our way into the game. I didn’t think we had legs to start with. The puck, I’ve never seen a puck bounce around as much as it did tonight on the ice. I don’t know what was on the ice there, but a lot of bouncing, pucks going all over the place, and he followed it and tracked it well and got us whistles when we needed them and when we were tired. So, he managed the game well and he made the saves when we needed them.

McLellan, on Toffoli scoring and making plays:
Yeah, he was. On the left side he’s in the play a little bit more a little bit quicker, which is a good thing for him, and down the stretch we promoted him back to his right side where he can do a lot of good board work and we saw that, so it should be a really good night for him to put his head on the pillow and feel good about himself and build off of it. [Reporter: Was mixing up the lines with him, was that trying to send a message to him?] No, let’s not talk about an individual. Let’s talk about the group. We hadn’t gotten much from Mods, Pro, Carts and Toff together, whoever was playing there, and when you lose four or five players, you have to do something, so we shuffled it up hoping that we could find two lines, and we did for the most part. I thought the Carter, Lewis and Clifford line played well, also.

McLellan, on whether tonight’s second period was among the best of the season:
I can’t remember all of them, but it was a good team game. Pretty direct, not a lot of turnovers and cute stuff that cost us. Pretty good board work. Structure was strong. Played well with the lead. Checked with the legs, didn’t take many penalties, so we checked off a lot of boxes. A tough victory.

McLellan, on whether he’s getting more consistent collective efforts over the last 10-15 games:
I think that’s a good observation, I really do. I think we don’t ebb and flow quite as much. We’re not as high and we’re not as low. We kind of stay steady on the rudder, which is good for our team. [Reporter: Where does that come from? Does it come from confidence? Does it come from guys buying in to what the system is and what you’re saying?] I believe it’s a little bit of everything. First of all, there’s a lot of players that’ve played a long time, and they’re beginning to feel good about themselves again. They’re playing with structure and they know they can rely on each other in certain situations. … We don’t roll over and play dead, which I think is a really, really important quality for us to have. And what I mean by that is all the tight games that we’ve played in and maybe come out on the wrong end, it’d be easy for them to chalk one up to bad luck and maybe not put the effort in, but they keep showing up and doing it. We talked a lot about that on this past road trip.

McLellan, on the outlook to playing so many upcoming games on the road:
We have to take this game on the road and see what we can get, and quite frankly, we did that in Alberta. We took this game there and just came out on the short end. I think the second night was a little due to fatigue. The first night was more of the penalty kill than anything. One of them was a very lucky goal, but eventually we’ll break the seal on the road if we keep playing the way we are and play as a team, and we’ll go from there. Tonight’s we’ll enjoy the home win. We’ll worry about the road tomorrow.

Jonathan Quick, on whether the team was “yearning” for a win on Tuesday:
Just trying to win a game. We lost a few on the road, so we [inaudible].

Quick, on the team’s performance:
I mean, to be honest, I thought our second was our best. I didn’t think we were very good in the first. I think as the period went on we got better, and I thought we played a really great second period and obviously we were able to finish it off in the third.

Quick, on the upcoming road schedule:
Just find a way to win against some really good hockey teams. We’re playing a lot of them on the road trip and we’ve got to be ready for that.

Tyler Toffoli, on earning a win after getting the legs going:
It was nice obviously to have the two-goal lead. We had it the other night and lost it, so it was nice to be able to build on it and lock it down.

Toffoli, on whether he was aware of McLellan’s comment Monday that he’s got “more to give”:
Did not read it, I’m sorry. [Reporter: He was asked. It’s not like it was unsolicited. But as a player, do you ever see that, or is that something that ever impacts you?] Well, it’s not something that I read, but I feel like it’s a general consensus that I know I need to play better, and I stepped up tonight and thought I had a good night.

Toffoli, on any adjustments, or whether his production was reflective of the puck simply going in:
Yeah, I mean obviously it took a nice little bounce for me on Roysie’s shot and rolled over his shoulder. Those are nice – I’ll take those ones.

Toffoli, on attending the Rams game on Sunday:
Yeah, it was Drew’s birthday, so we had to do everything for him. It was a lot of fun. You know what? It was good to get together as a group and support another LA sports team. Like, they came and I’m sure they had a great time tonight and got a win as well, so it was good. [Reporter: 73’s a good number for a defensive lineman.] D-lineman or O-lineman? [Reporter: It could be either.] Don’t think I’m as big as those boys, though.

— With the win, Los Angeles improved to 52-67-19 all-time against New York, a record that includes a home mark of 30-29-12 and a 4-1-0 record in the last five Staples Center meetings. These teams have one game remaining: February 9 at Madison Square Garden.

— Matt Roy registered his first career multi-point game. In his last 19 games, he has three goals, nine points, a plus-six rating and a team-best +3.9 CF%Rel.

— Tyler Toffoli scored his first game-winning goal since February 5, 2019, when he scored twice in a 5-1 win at New Jersey.

The Kings are scheduled to practice at Toyota Sports Performance Center at 11:00 a.m. on Wednesday, December 11.