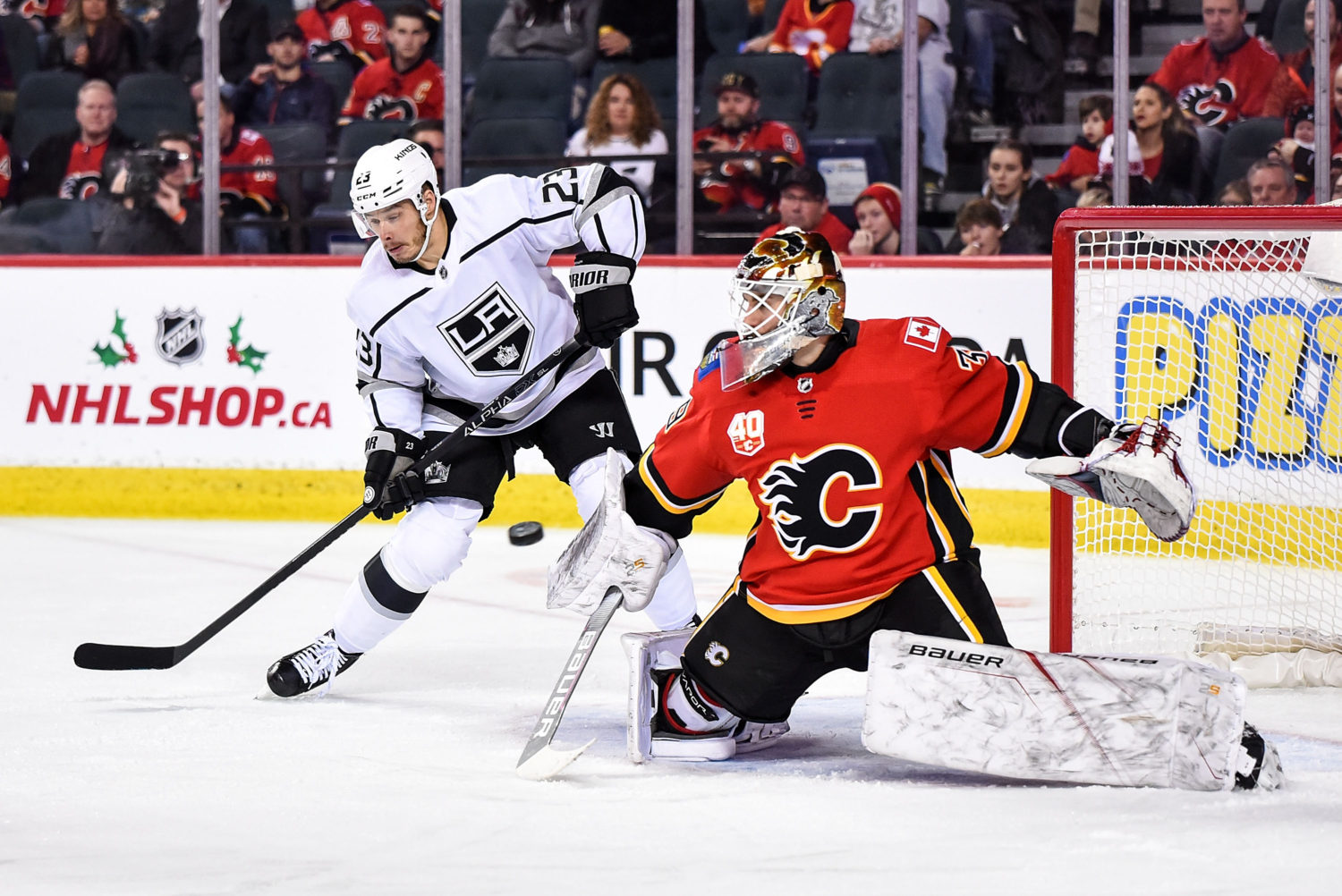 Todd McLellan, on whether he got the start he was looking for despite the loss:
Yeah, we got it. Power play got us two, and then after that they worked their way back into the game. I thought that the fatigue factor began to take over. I think somebody asked me a week or 10 days ago that question, and I told you I’d tell you when I thought the team was tired. I thought the team was a little tired tonight. Losing Pro for a little while, losing Cliffy didn’t help us. We became a three-line team basically the second line of the game and we ran out of gas a little bit. But a pretty honest effort again by the group. Moral victories aren’t what we aim for but that’s what we’re taking out of the last two games. I thought we were pretty competitive in a lot of areas.

McLellan, on whether fatigue led to the long-ice challenges against:
Well, the fourth one was the one that hurt us because we needed to come out and establish some momentum. That wasn’t fatigue – that was just a mistake. We misread the rush, our D caught way outside and they ended up scoring. The one prior I thought we could’ve done a better job too, but those are mistakes that build as the night goes on and when you’re tired you’ve got to be really detailed. In those situations we weren’t, and they made us pay. They’re a good team right now. They have a lot of confidence and they took advantage of those situations.

McLellan, on whether he saw the Zac Rinaldo hit:
Well, of course I did. You guys all looked at it too. I’m always asked this question after. What usually happens is one coach says, ‘I haven’t looked at it yet,’ and the other coach says, ‘you know what, I think the player was in a vulnerable position, I think that the head was targeted, I think that the weight went up and I think the feet came off the ice,’ so figure out which coach was which. [Reporter: What about the heart from Kyle Clifford standing up for Pro and the moments that followed?] It’s a team move and that’s what Cliffy does for his teammates. [Reporter: Did they get tossed because it happened during a TV timeout?] Yeah.

Drew Doughty, on the loss despite the good start:
Just up and down shifts in the second period. They had us hemmed in and we [inaudible] on them, and that’s something we’ve been talking about a lot, is just being consistent shift after shift. We can’t have one good shift and two [——-] shifts, and if you want to play the whole game like that you’re going to lose games, and that’s why we’ve been losing a lot of games lately.

Doughty, on the frustration over not holding a lead:
Yeah, this year anyway, we’ve played very well with the lead, so I thought after the first period with that good start, we thought we’d be comfortable in here, maybe too comfortable. Didn’t push enough in the second, maybe sat back a little bit too much and we allowed them back in the game, and then we were chasing after we got down 3-2 obviously.

Doughty, on why he doesn’t like the Calgary media:
Just making that whole thing about the Tkachuk thing – I’m just sick of it to be honest. It’s nothing against you guys. I know you’re doing your job, but I’m just getting sick of it.

Doughty, on Jack Campbell giving the team a good chance to win:
I mean, I get what you’re saying because Jack doesn’t play as many games, but he stood on his head like he always does. Both of our goalies played great for us this year. We’ve got to score them more goals. Here we go again talking about the same stuff, not scoring enough goals. I feel like we’ve changed things to try to score more goals, and at the beginning of the year I felt like we were giving more offense up against us because of it, and now I think we’ve been playing solid defensively. Our goaltending has been great. We just need to score goals – that’s it.

Kyle Clifford, on what he saw from Zac Rinaldo’s hit on Nikolai Prokhorkin:
I didn’t actually see it, but I went to the bench and I was told it was dirty. Just knowing that guy’s history, he’s kind of got a reputation for it.

Clifford, on whether there was any communication with the linesmen prior to engaging Rinaldo:
No, no there was no communication. Obviously looking at the replay, it was a dirty hit, so I wasn’t happy about it.

Clifford, on whether he’s feeling better after missing a game due to illness:
Yeah, yeah. [Reporter: Something that just came on yesterday, yesterday morning?] Two nights ago, yeah.

Jack Campbell, on whether he felt good about his personal performance despite the loss:
I mean, from a team standpoint I think we did a lot of good things. Individually, if I give up four, it doesn’t matter what I did out there – it’s not good enough. So, it’s just not good enough. That’s it.

Campbell, on how the team held up at the end of an extended stretch:
No excuses for me. I expect to help this team win games, not just be in games. I think the boys played really hard and they made it 4-2. All season I feel like we’ve been pretty resilient, not giving up, but it’s just not acceptable to give up four goals in my opinion on my end, so that’s the bottom line.

Campbell, on the discrepancy between the team’s home and road records:
I think that’s the frustrating thing, too. I think we’ve played really well at home, and I still think we’re playing well on the road, but sometimes you’ve got to steal one 2-1 on the road or 3-2, and get those big points in these tough buildings. I think we’re playing well enough to win just needed a couple more saves tonight.

Campbell, on Clifford sticking up for Prokhorkin:
I mean, that just sums up Cliff. He’s a warrior, he wasn’t even feeling that great, but still, he stuck up for a teammate just as he always does, and Pro’s a tough guy, too. He came back and he’s been big for us lately and he’s been playing well. I thought the boys just kept battling and stuck with it, just needed a win. [Reporter: Had you made it back to the bench by the time him and Rinaldo mixed it up?] No, I mean, I was to the bench, but it kind of started without me seeing it. But it doesn’t surprise me. He sticks up for everybody, so lucky to have him.

— With the loss, Los Angeles fell to 100-116-30 all-time against the Calgary franchise, a record that includes a road mark of 40-68-17 and a 2-1-0 record this season. These teams have one game remaining in the four-game season series. February 12 at Staples Center.

— Los Angeles scored two power play goals in a game for the first time since March 26, 2019 in an 8-4 loss to Edmonton. The two goals were scored in their first nine seconds of power play time.

Sunday, December 8 is an off-day for the team. The next practice is scheduled for 11:00 a.m. on Monday, December 9 at Toyota Sports Performance Center.