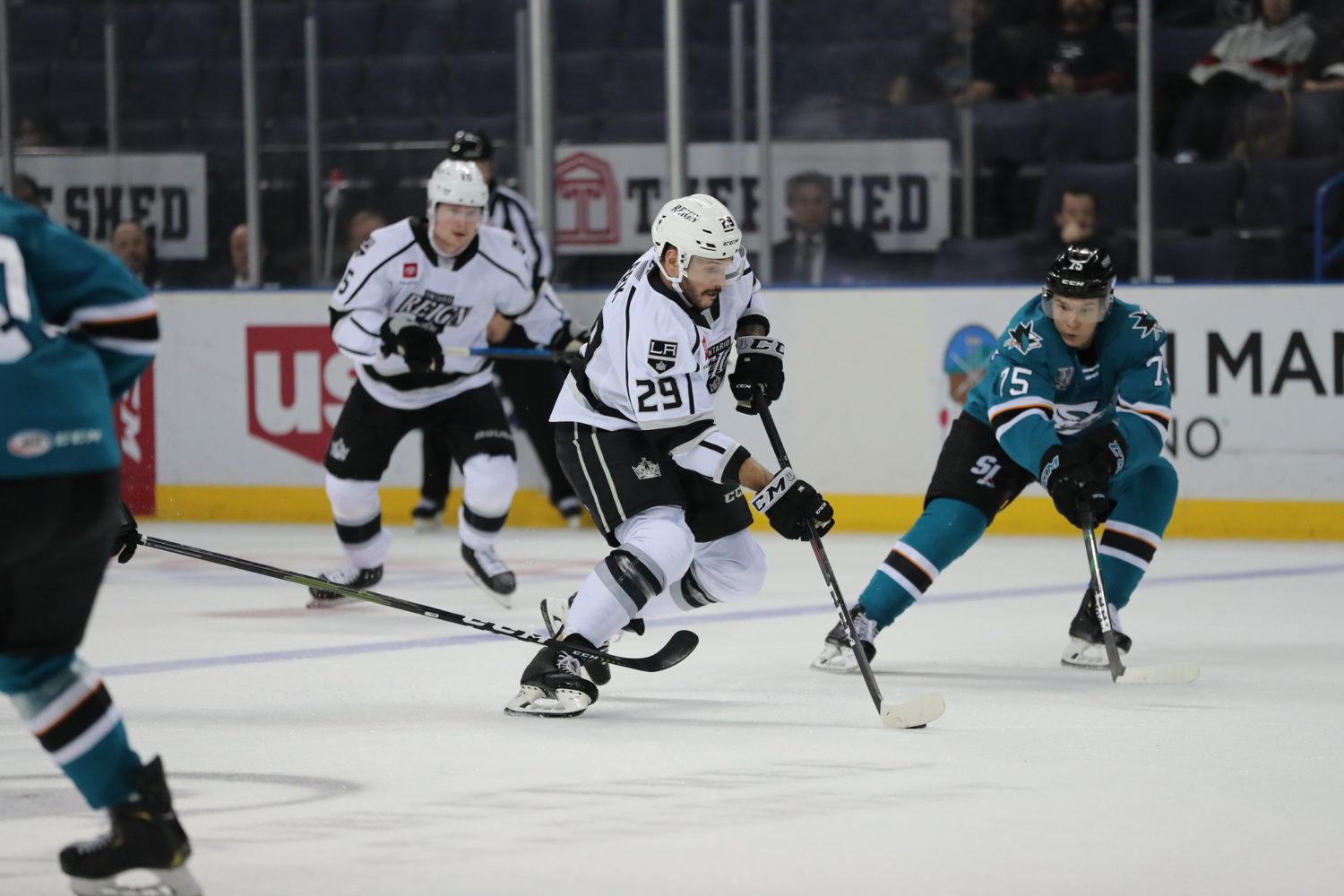 In a 9-2 game, the scorelines speaks for itself – It was not a memorable night for the Ontario Reign. A 9-2 defeat on home ice, their second time in three games conceding 8+ goals, as Ontario fell below the .500 mark on the season.

There wasn’t much to report on a positive note for the Reign. Martin Frk and Ryan Stanton scored, as Frk collected multiple points for the second time in as many games, while Stanton’s tally was his first in a Reign jersey.

On a former Reign note, forward Jonny Brodzinski collected two points in the San Jose victory, in his first game back at Toyota Arena in a different uniform. Brodzinski scored on a breakaway in the second period, and added an assist on a goal in the third. Hear more from Brodzinski below.

Ontario Reign Head Coach Mike Stothers’ words below tell the tale of tonight’s defeat, described simply in a few non-printed expletives, descried in a bit more detail in what followed. The Reign can only go up from tonight’s performance, and will get another shot tomorrow evening, as they once again host San Jose at Toyota Arena, with puck drop slated for 6:00 p.m.

Jonny Brodzinski on his feeling, being back in this arena as a visiting player
It was a lot of fun. I love playing in this building, there’s something about it coming from my first American League year. A lot of great memories in this building, and then the performance that we had tonight, that helped it a lot. [Reporter: Did it feel a little weird, going into the visitors locker room for the first time?] Yeah, for sure. It’s a little different being on the other side, but that’s the business.

On if it was good to have already played against the Reign on the road, so that the first time playing his former teammates wasn’t in this building?
Yes and no. Really, you just think about it as another game. I think there’s probably only three or four of these guys on the team that I actually played with, so that’s pretty much a brand new roster, for me at least. A lot of the guys I played with are with the Kings now, or gone. It was good.

On if he had talked with Mike Stothers prior to the game
Yeah, I always like to get in there and give him a hard time, he’s my favorite coach of all time. He’s a great coach, he’s helped me through a lot and I owe a lot of what I’ve got today to him.

On what it is about Stothers’ approach, that makes him so respected and loved by players
I just think it’s the tough love that guys like from him. I know for me personally, he pushed me harder than any coach that has ever pushed me and that helped me a lot to grow as a player and mature, especially the defensive side. I came in and really didn’t know anything defensively and he kind of nurtured me through that. He ended up sitting me one game, because I didn’t have a goal in about 18 games, so he sat me and played me the next game and I ended up scoring my first American League goal, so just little stuff like that you notice throughout your career.

On his relationship with Jonny Brodzinski
How many points did he have tonight? [Reporter: 2] Well, if there’s something to take away from it, then that makes me very happy to hear, because I really have a lot of respect for Brods and the way he played, he played hard for us. I appreciate hearing that, it takes a little bit of the sting out of the game tonight, that’s for sure.

On teaching Brodzinski on certain aspects of the game
That’s a while ago…..you know what, he struggled a long time to score a goal. We sat him out, he scored in Charlotte, didn’t he, and then he never looked back. It’s great to reminisce, I love him as a person, I love him as a player, we wish him nothing but success…but we’ve got to fix what’s going on here, that’s just unacceptable tonight. You guys did actually make me feel good coming through the door John, how did you pull that one off? [Reporter: It was a tag-team effort] Dools always makes me feel good, I always feel better about myself when I look at Dools.

On what he can do before tomorrow to make changes and try to get a different response
We’ve usually responded pretty well after a stinker, so I don’t know…you just hope that they find a way to put it behind them, and that’s all you can do. You can sit here and dwell on it, you can sit here and look at the video, you can break it down, we weren’t very good. There’s only one way to go and that’s up, that’s to be a little bit better. I don’t know, I have no answer for it, I’m just as perplexed as you guys.

On if it’s good to have no time to dwell on it, with a rematch in less than 24 hours
Well, yeah. They just put three field goals up against us, so I guess maybe we shouldn’t be so excited to see them tomorrow. I’m excited for tomorrow, it’s why you get up in the morning, to see how we respond. I’m anxious to see, just the same as you are.

On his philosophy after a loss like that, and if he likes to stick with the same group or make changes
You take it as it is. There’s not many ways you can change the lineup, you only have certain players at your disposal, so basically what you saw tonight is what you’re going to see tomorrow. I mean, yeah line combinations maybe, a body in and a body out, but sometimes you look at it and you go okay, let’s just go with the same group and see how they respond, put it back on them. It’s easier, I actually find it easier to make changes when you’re winning, that’s my preferred method of making lineup changes. [Reporter: Because everyone’s confidence is high and things are rolling?] Well, it just looks like you’re changing things because you’re trying to change things if you’re losing. It keeps everybody on their toes a little bit more if you change it when you’re winning. Listen, there’s been times where we’ve won games and I haven’t been very happy with our team, because I know we can play better. Tonight, we couldn’t play any worse, so there’s no sense going in there and….we weren’t very good. Like I said, tomorrow, we’ve got to better. Unless we give up a touchdown and a field goal, that would be worse.