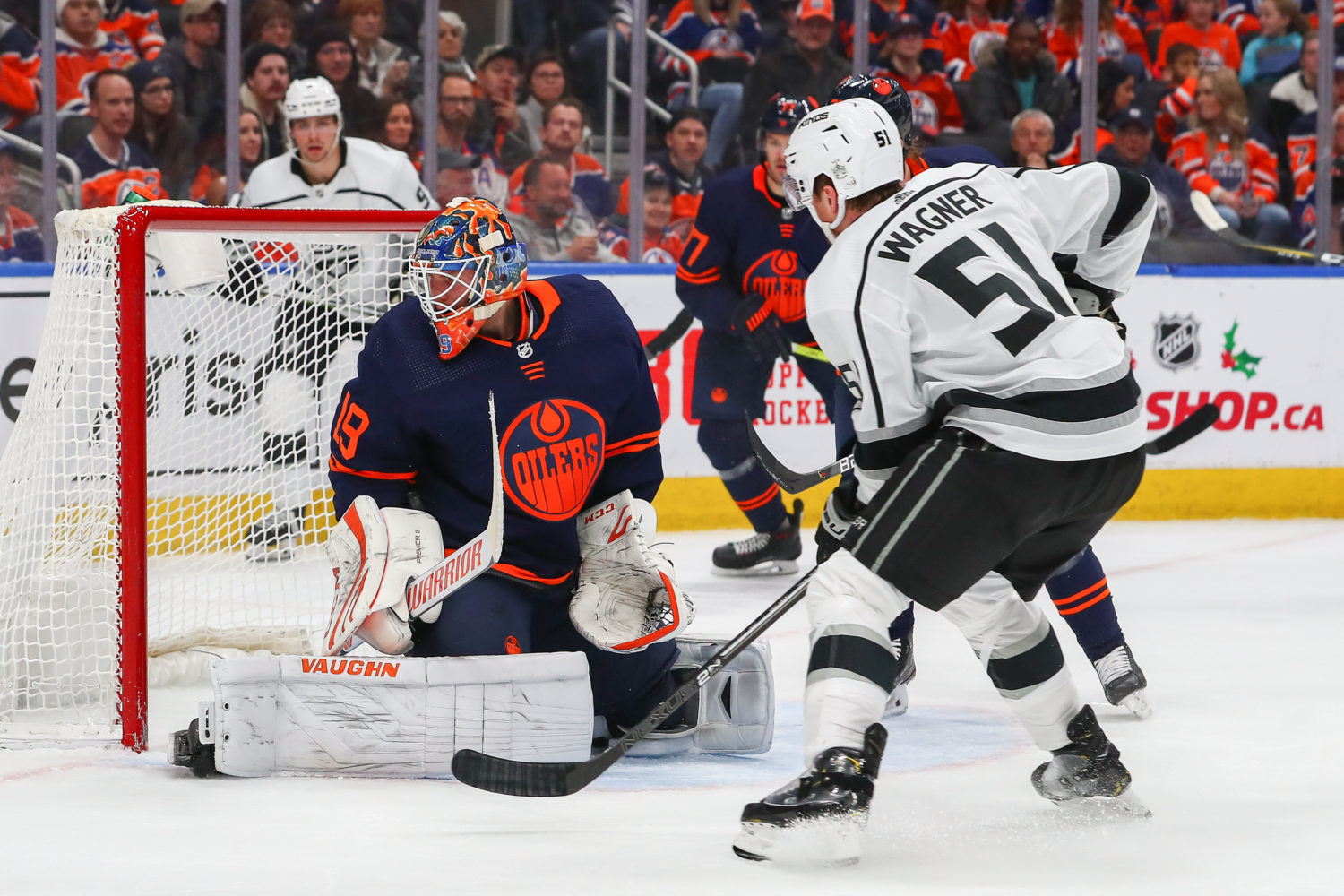 Todd McLellan, on the strong performance despite the loss:
Yeah, for the people here in Edmonton, we’ve been playing like that a lot. We come in after the game, we sit there and we look at each other, and we just keep telling the same story over and over again. Close, work hard, don’t quite, pretty good structure. Just a goal short, but we’re getting better and there’s not much for us to complain about as a coaching staff. They get a lucky one off a foot on the power play, and then they pick us apart for one, too, so give ‘em that one. But after that, we kept a team to 15 even strength shots. A lot of it was from the outside, so we’re happy with the effort and we’re disappointed in the result.

McLellan, on how to keep frustration or bad habits from setting with so many narrow losses:
It’s our job to keep the bad habits out, and it’s our job to try to keep the morale up. Not by any means are they down right now. I think they understand that they’re playing a pretty good game, and we talked about it again between periods. Stick with the program. I think we’re getting better at losing, and the whole purpose of our approach this year was to get some structure in place and to move the needle and get better and we’re doing that right now. We’re not winning enough games but we are getting better, and it will pay off at some point. I don’t think anybody in there is really down when it comes to effort or commitment and all those stupid words that coaches use. Nobody’s there, but they’re a little bit down that we’re not winning, and we can fix that. We play this game 10 times in a row, we’ll win at least five of ‘em, so we’ll be fine.

McLellan, on the disallowed goal, followed quickly by Edmonton’s second goal:
Yeah, the swing of momentum goes against you really fast on the road, and you don’t want that to happen. The call didn’t go our way. That’s going to happen, and we have a turnover, take a penalty and it’s in our net. That was fata or could’ve proven to be really fatal for us had we let it go, but we’re not that type of group right now. We said we’d play through it and pick ourselves up off the mat and we keep going.

McLellan, on his impression of Paul LaDue:
Tough assignment for him. He hasn’t played an abundance of NHL games lately, and he comes in and he plays against two of the more gifted and faster players in the league on the road, and we don’t get last change, so he had a tough assignment. I thought he did a pretty admirable job.

McLellan, on whether Kyle Clifford could play tomorrow:
I don’t know. We’ll see how he’s feeling. [Reporter: Is that something that just came up this morning?] Yeah.

McLellan, on carrying the strong play into Saturday’s game:
We’re back-to-back games and I think we’re playing eight-in-13 tomorrow night, so we need everybody on board. We can’t have any spare parts resting or taking time off, and we’ve been getting that for the most part. I don’t know if we’ll make some lineup changes. We’ve got to see who’s healthy and who isn’t sick and then go from there, but keep the belief system up as high as we can, and duplicate this game and we’ll take our chances.

Anze Kopitar, on whether the team had better energy at the start:
Yeah, the energy was fine. Everything was fine. I mean, we started off well, and you give up two. We knew obviously that they’re a very good team on the power play and they made us pay for the mistakes we made.

Kopitar, on whether the string of similar, narrow losses can wear on the team mentally:
Yeah, that’s been the story lately, so we’ve got to figure out how not to fall behind and essentially get the first goal and play with the lead. It’s a lot more fun, it’s way better and we’re going to have to figure it out.

Kopitar, on how difficult it has been to lose but be happy with their effort:
I mean, the efforts are there. I think if you look at the five-on-five game tonight, we were probably the better team, creating more chances. But the game consists of the special teams, and special teams nowadays are huge parts of the game, and we lost it tonight.

Kopitar, on the team’s disallowed goal, followed quickly by Edmonton’s second goal:
Well, it didn’t affect us at all because we came back and we were playing a very good game after that. But it’s obviously not great. You think you tie up a game, and especially the starts that we’ve had, you think you get one early and kind of get back into the game, and then a minute later you go down two, so it’s definitely not ideal. But I thought after that we battled well. It just wasn’t enough.

Adrian Kempe, on his ability to attack and pressure their opponents:
All the things you said. Forecheck, for sure. I think we create a lot of turnovers off that. I think tonight we broke the puck up well and had some good rushes against their team. When they had the puck, it kept turning over in our favor and we had some really good chances and looks. Unfortunately, we couldn’t score – we scored one, they took it away. It was a tough loss, but I think overall our team played pretty well five-on-five throughout the game and deserved more than this.

Kempe, on whether chasing games is taxing:
Obviously, you don’t want to chase games, for sure, but I think we’ve been doing a good job coming back in games. We’ve been playing solid D, we didn’t let up a lot of shots tonight, which was a good thing, and it just kind of came down to special teams tonight. We knew before that they had a really good power play. Obviously I think it was a steap in the right direction for sure, but it’s tough losing, especially on the road. I think we’ve just got to bounce back, keep our heads up and play hard tomorrow.

Kempe, on getting penalized by grabbing at Kris Russell:
Yeah, I think that’s what he called – holding. I think that happens not just once in a game, it happens quite often. But I mean certainly he had the puck, and the ref saw it and he called it. It was tough, but you’ve just got to keep going.

Blake Lizotte, on the frustration of losing another close game:
Yeah, it’s frustrating to lose this game just like that. I thought we were good basically all three periods. They scored two power play goals, which they’ve done all year. Look at their umbers – their power play’s top-five in the league, I’m pretty sure. Again, that’s on us for giving them two goals, but we were right in that game. All game long we had chances to put pucks into the net and they didn’t fall for us. Unfortunately, that’s been the case lately.

Lizotte, on whether he thought he had remained on-side on his disallowed goal:
I knew it was close, yeah. When you drag your foot, you’re not sure where the line is exactly. I knew it was going to be close, so even when I scored, I was a little bit, ‘all right, they’re going to review it probably,’ and sure enough, it was a centimeter or two. It was really close.

Lizotte, on keys to his line’s attacking play:
Just kind of what the factor for our line has been the last five games – forecheck. Turning pucks over with our energy and the speed. I thought we were good tonight. Created lots of chances off the forecheck. A lot of zone time. They just didn’t fall for us tonight.

— With the loss, Los Angeles fell to 87-89-39 all-time against Edmonton, a record that includes a road mark of 39-52-18. They are 1-8-0 all-time at Rogers Place, having lost five straight road games in the series. One game in the season series remains: February 23 at Staples Center.

— Jonathan Quick has allowed two goals or fewer in seven of his last 10 starts.

— Since recording six goals and 16 points over a 13-game stretch, Anze Kopitar has been held scoreless and limited to three shots on goal over the last five games. With 915 career points, he is three points behind Wayne Gretzky (918) for fourth place on the franchise’s all-time scoring registry.