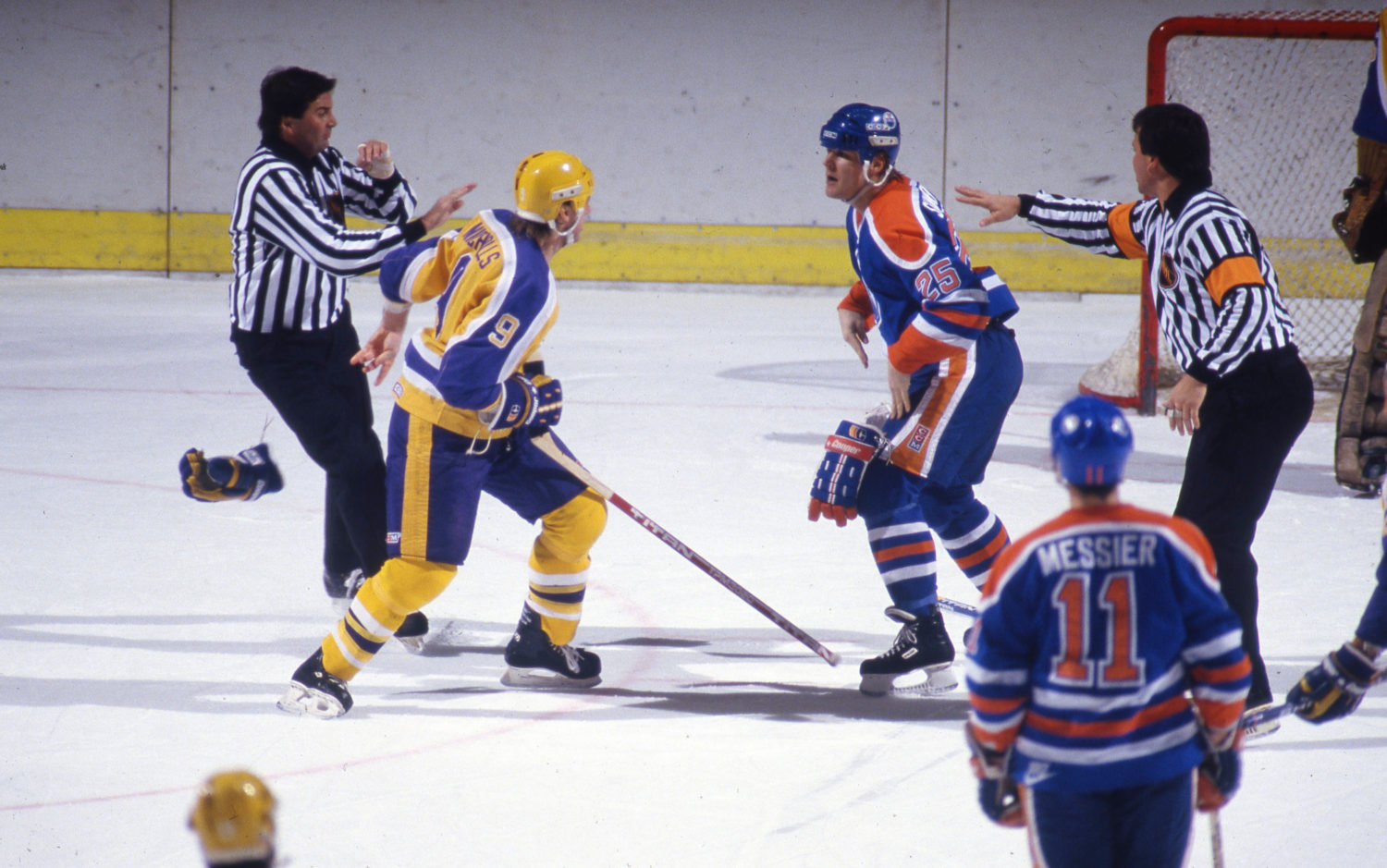 INSIDERS. Well, this certainly looks like a lot of words. The LA Kings held an optional morning skate at Rogers Place, and though there were no clear indications of the lineup Todd McLellan will use against Edmonton (6:00 p.m. PT / FOX Sports West / FOX Sports GO / LA Kings Audio Network), there are enough clues to make an educated projection. Let’s get started. 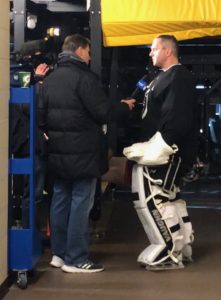 — The vitals: It’s Jonathan Quick, who’s 23-8-5 in his career against the Oilers with a 2.05 goals-against average, a .924 save percentage and three shutouts. 1990 Conn Smythe Trophy winner Billy Ranford subbed in for the 2012 winner at the skate, as he has frequently done this season. This happened in Edmonton, so it obviously drew attention. Here he is, still in his gear, answering questions for TV. There’s no way this doesn’t end up on TV in Edmonton. The Kings holding a Legends Night for Craig Muni is more likely than this not ending up on TV in Edmonton when there are cameras nearby. (And why this is the best pure hockey city in the entire league.) A good sport, and team player, Billy Ranford.

No skaters really lingered on the ice. Jack Campbell stayed on with Ilya Kovalchuk; I’m not expecting either to play tonight. Kurtis MacDermid was also one of the stragglers, whereas Paul LaDue came off relatively early, so it’s very possible there could be a change on the back end. I’m wondering aloud whether the final forward decision will come down to Austin Wagner versus Matt Luff; Luff came off first, but Wagner didn’t dither. If you’re inclined to wager, this template could be pretty accurate: Iafallo-Kopitar-Brown, Carter/Prokhorkin-Toffoli, Kempe/Lizotte-Luff and Clifford-Amadio-Lewis up front. If LaDue enters in, your guess is as good as mine. Who knows. Maybe it’s Walker-Doughty, Hutton-Roy and Ryan-LaDue. Maybe it’s Watters-McSorley, Zhitnik-Blake, Huddy-Watters. Wait for the song.

“We have some progress. We’ve laid some foundation down as a hockey club,” McLellan said when asked to reflect on the task to date. “We’re beginning to understand how we want to play systematically. It’s starting to happen more naturally than mechanically, and that’s a good thing. We’ve figured each others’ personalities out. The players, ours as a coaching staff, and us, theirs. Practices are becoming more efficient because they understand the pace and the type of tempo that we want. Familiarity with drills. So, it sounds like we’ve made a lot of progress, but we have a lot more to work on and we’ll just continue doing it. No complaints about the players showing up and being honest most days. They apply themselves the way we expect them to. They’re open to new ideas and new ways. For the most part it’s been pretty good. There are always going to be a couple games that get away on you and you’re not happy, and we’d like to win a few more than we have, but for the most part it’s been a pretty good experience.”

— Their vitals: It’s Six Meters of Koskinen, former teammate of Nikolai Prokhorkin and Kovalchuk with SKA-St. Petersburg. Mikko has saved at least 92% of his shots faced in nine of his 17 appearances this season and is 2-1-0 in his career against Los Angeles with a 3.79 GAA and an .885 Sv%. Via Jamie Umbach of EdmontonOilers.com, Edmonton could line up with groups of Neal-McDavid-Archibald, Khaira-Draisaitl-Gagner, Granlund-Haas-Chiasson and Nygard-Sheahan-Russell up front with defensive pairs of Nurse-Bear, Klefbom-Persson and Russell-Larsson. Ryan Nugent-Hopkins (IR/hand) will probably need a few more days before he’s able to return, though Zack Kassian (back) is day-to-day and close. Matt Benning (IR/head) is out.

The Kings have scored 10 goals in two games against the Oilers, who are looking to tighten up and cut down on chances and goals against after losing 5-2 to Ottawa in their last outing. There’s not really any correlation between the two previous games, McLellan explained, because in the first game everyone was still “trying to figure out our way” and “who was who as players.” Their game plan doesn’t change if McDavid and Draisaitl are on different lines; both will still have an impact. 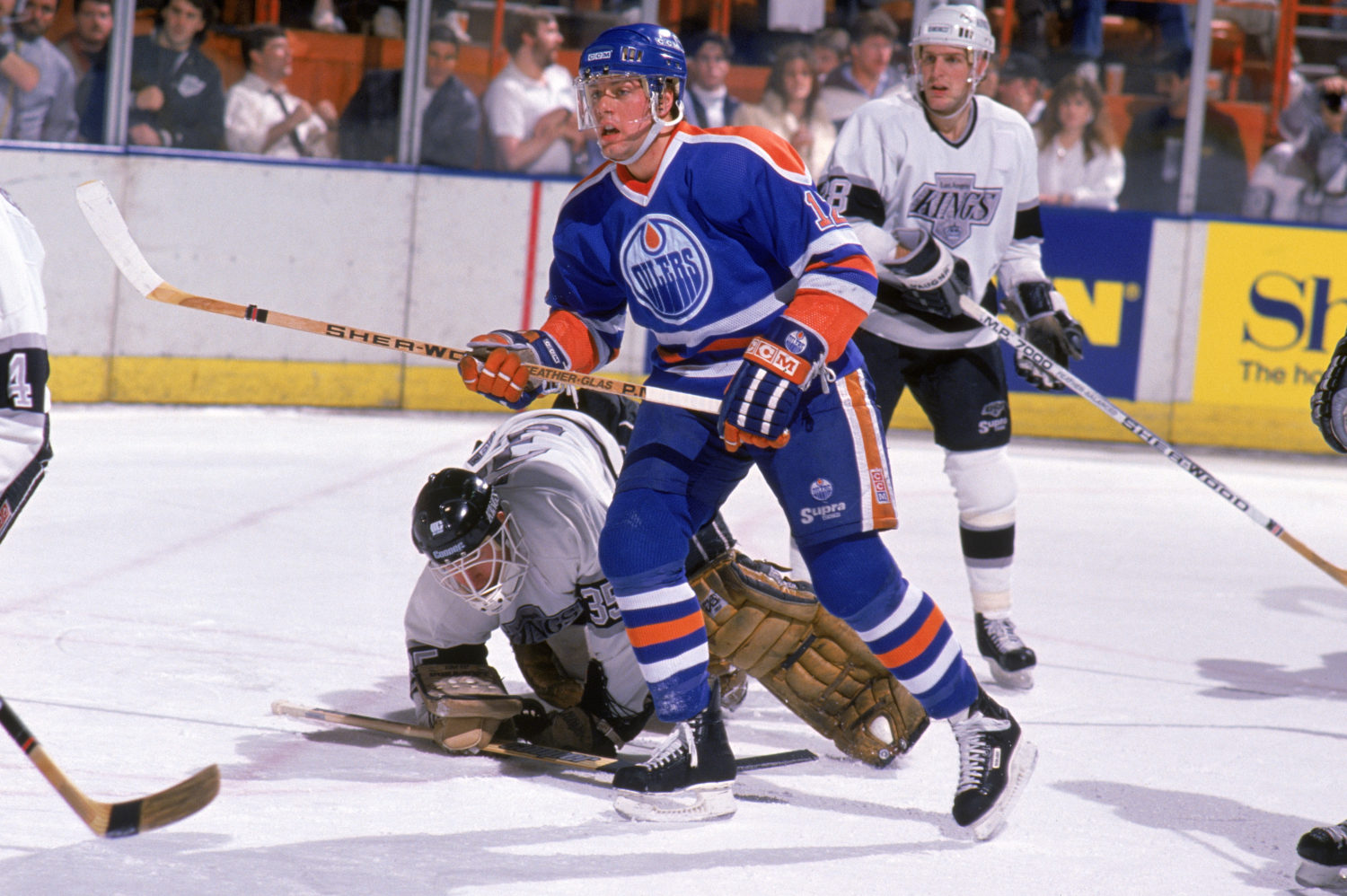 — I’m not really sure if this is a news story – if you NEED that multi-sentence update on Kovalchuk RIGHT NOW, scroll down – but in casual observations, Adrian Kempe’s shown a good aptitude to stay strong on the puck. Again, not really news. When his game is going well, regardless of whether he’s skating at center or wing, he has the ability to remain strong on the puck.

But he’s demonstrated the added strength well along the wing, where his ability to compete and extend battles for pucks have served him well, even as he’s gone five straight games without a point after an early spike upon the shift left. His ability to hold onto the puck when exiting or entering a zone has appeared to improve, even as he’s taken on some unfavorable numbers. Is this something that’s more anecdotal? Is it derived from any difference in his responsibilities?

“I’m seeing those types of improvements in his game,” McLellan said. “I don’t know if it has anything to do with physical strength. I think it’s mental strength. “He feels good about himself right now. He’s much more confident now than he was three weeks ago. Nothing that we’ve done – everything that he’s done. He’s applied himself and played a much stronger game, and he’s earned the right to be confident, so I think that’s where it lies.”

He’s up to 201 pounds, roughly 15 more than when he made the permanent jump across the Atlantic Ocean. His bulk and conditioning are apparent in speaking with him at the rink, they’re clear when watching him extend his battles, they’re clear from looking at the statistics indicating that his slightly abbreviated shift length, previously spotlighted, has improved three full seconds on average per game over last year.

“I think you try to be strong on the puck, you try to create space for yourself and then obviously I try to use my speed as much as possible, both ways,” Kempe said of his neutral zone puck management. “I try, sometimes drag the D-man to me and then create space for myself when I get the puck and stuff like that. There’s a lot of things, when it comes down to it, but being strong on the puck and on the walls are some of the things I wanted to get better on. If I use that with my speed, I feel like it goes pretty good together.”

It’s been shared here ad nauseam, but Kempe is a coachable player who has a good account of himself. Darryl Sutter doesn’t always take to 20-year-olds, but he certainly did with Kempe at training camp in 2016 when he praised him not just for his physical attributes but also for his “Hockey IQ.” It shouldn’t be surprising that Kempe’s self-policing led to an assessment that he wanted to improve his play on the puck and perimeter play. “I think I was just onto myself from the beginning, you know?” he said.

“First of all, going back to the wing, I was thinking that I obviously have to be really good on the wall, in both the D-zone and O-zone and there are a lot more wall battles when I’m playing winger. After I started playing wing, I just tried to look at myself in the game, what I did well on the wall, what I can do better. I think it’s getting better and better on the wall and it’s just easier to play like that when you try to learn new stuff.”

— McLellan on Kovalchuk: “The situation with Kovy is a tough one for everybody. I can tell you that he’s been outstanding. Kovy’s situation has nothing to do with him as a person or his work ethic or anything like that. He’s outstanding. He works as hard as anybody right now, and it’s a tough situation, but we’ll get through it.”

— McLellan on how to improve in the first 20 minutes: “We’ve had some of the best starts that I’ve witnessed in my 15 years with this team. It’s just inconsistently happening. We’ve had Calgary, Winnipeg, even some games at home where we just overwhelm teams. We don’t get it from our team as often enough as we need. I don’t know if it’s realistic to expect that every night. There are some exceptional nights. But playing a straightforward game, winning faceoffs and having the puck is huge. Staying ahead in line changes, not falling behind and getting tired and slowing the pace down. I think individual preparation and presentation to the staff and the teammates is important right now for our team, so come ready and let’s see what you have.”

— I’ll probably save these for tomorrow, because it’s getting late and I’ve got a Rosen Report to prepare for. (Check out my World Juniors notes during LA Kings Live pre-game and during the first intermission.) But there’s some pretty good stuff from Drew Doughty, who this morning was asked about his time on ice. It’s down nearly a minute this season, even though he ranks second in the league with an average of 25:45. (Edmonton’s Oscar Klefbom is the league’s leader with a per-game average five seconds longer.)

Doughty’s sole focus is to win. He’s not as concerned with what his personal usage rates are. Or, at least, he isn’t as concerned as he used to be. “There used to be a bonus for that stat when I was in my first three years, so I used to care then,” he said.

“I do feel like when I play more, we do win more games, but it’s whatever the coaches need to do, and I understand we’ve got to get the young guys out there and see what they can do. I don’t care – whatever I play, I play.” 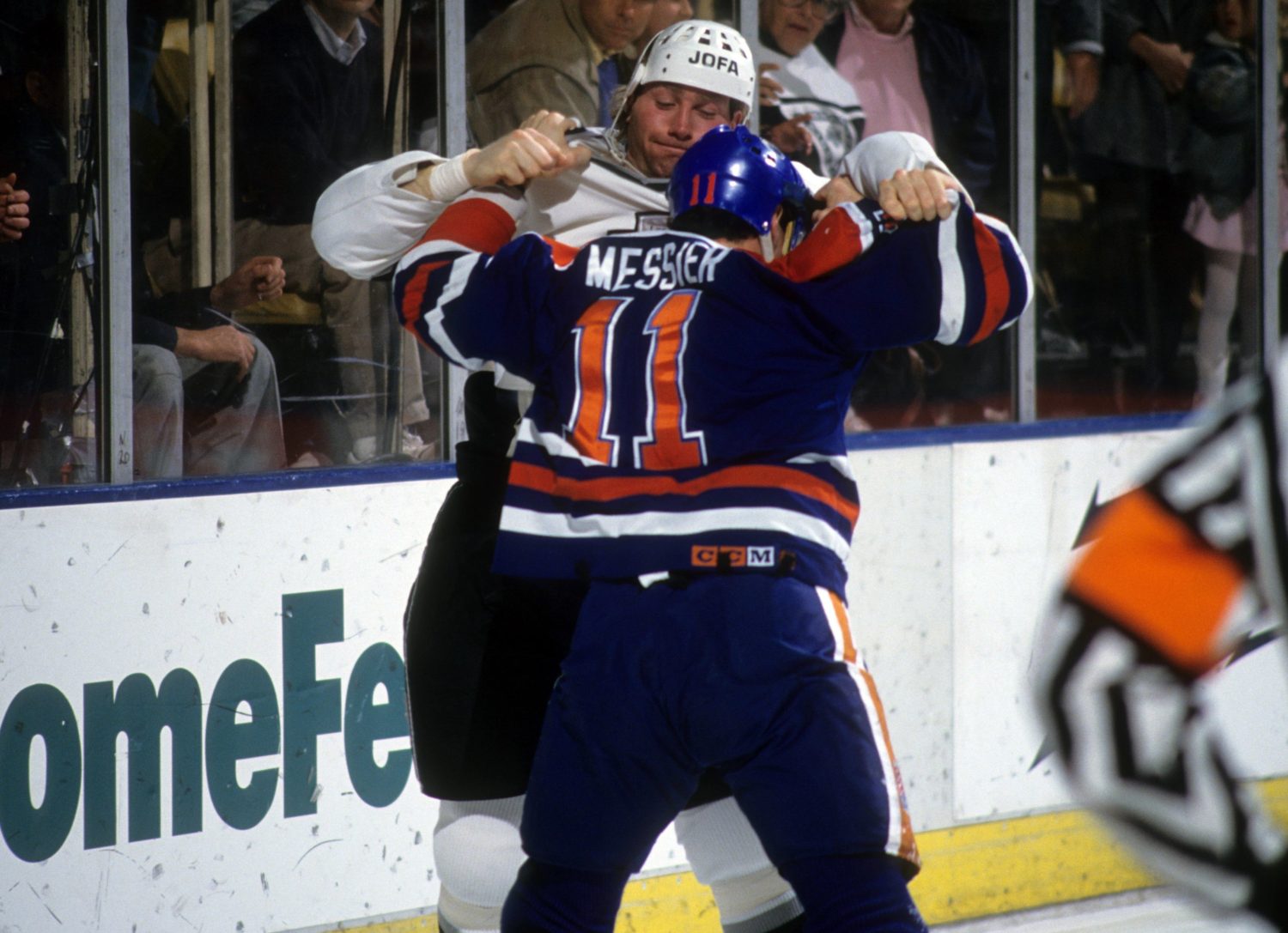