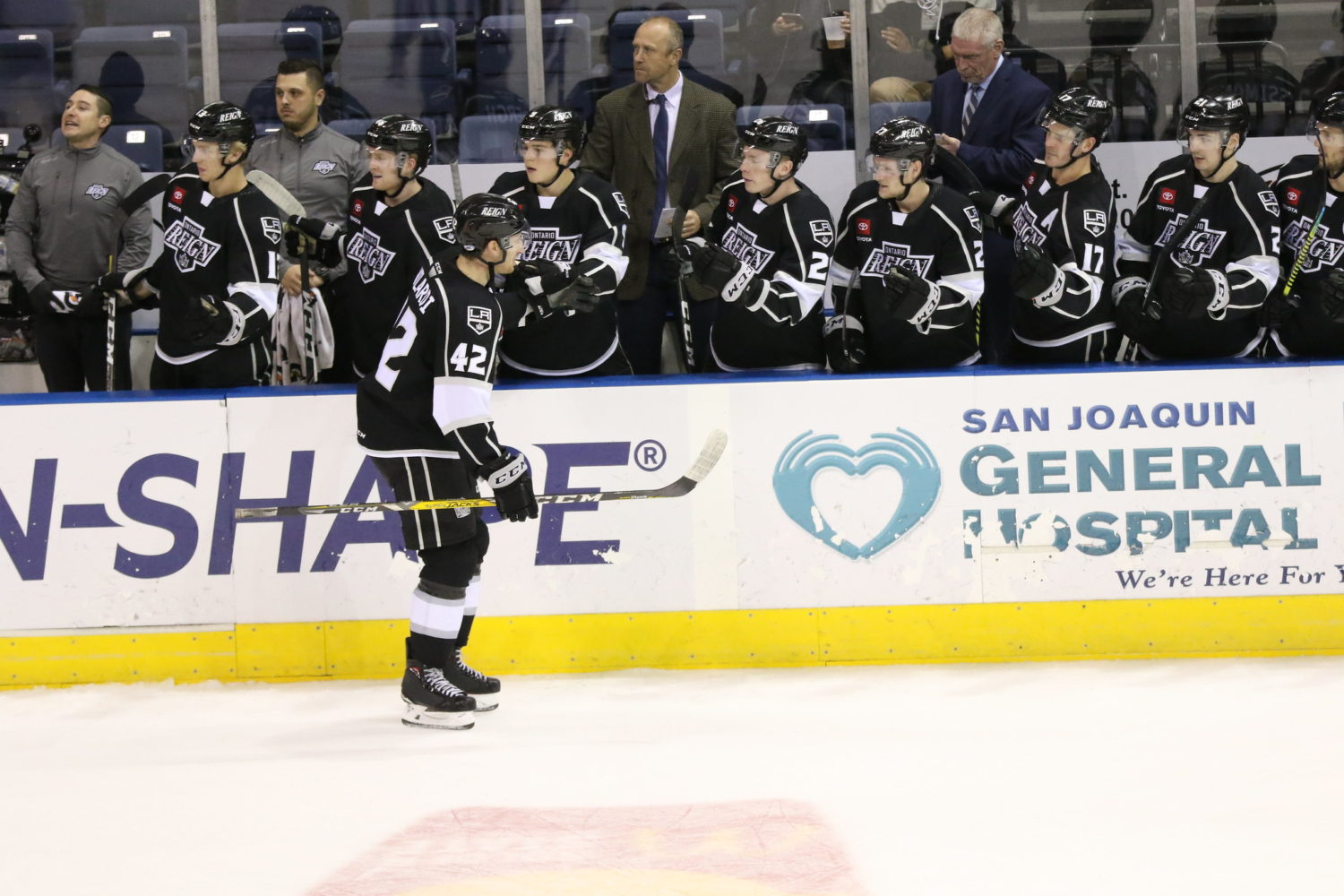 Tonight was a good night on several fronts for the Ontario Reign.

From start to finish in Stockton, tonight felt like one of the more complete Reign games of the season. Gabriel Vilardi scored his first career professional goal in the first period, a tally which would also go down as the game-winning goal, and collected two points in total (1-1-2) as Ontario skated to a 3-2 victory.

Ontario got all of its offense in the first period and more specifically, all of its offense in a span of 1:37 in the first period. The Reign got goals from Lance Bouma, Martin Frk and Vilardi in quick succession to open up a 3-0 lead in the opening frame. Bouma’s goal, in which he drove to the net to finish off a nice passing play from Jaret Anderson-Dolan and Mikey Eyssimont, extended his point streak to five games and his goal streak to three.

The Reign struck again just over a minute after Bouma’s goal, as Vilardi won a faceoff to the right of Stockton netminder Jon Gillies back to Frk, and the winger did what he does best and fired a laser into the top corner, past Gillies on the glove side. Just 25 seconds later, Frk and Vilardi connected again, this time with linemate Carl Grundstrom, for the Reign’s third of the evening. Frk forced a turnover in the offensive end and fed Grundstrom, who saw his shot stopped by Gillies, but Vilardi was on hand to knock home the rebound on the second opportunity, for his first career professional goal.

Though Stockton would score twice in the second period to pull to within a goal, the Reign were dangerous throughout the final 40 minutes of play and on another night might have netted an insurance goal or perhaps more. Ontario outshot Stockton 26-15 in the final two periods of play in what I felt was one of the best performances for the team this season. The win brings the Reign back to the .500 mark on the season, and snaps a five-game losing streak away from home. After they finished the month of November at 3-9-1, game 1 of December is certainly off to a stronger start.

After a practice day tomorrow, the Reign are back in action with a pair of home games this weekend, as they square off against San Jose on Friday and Saturday evenings at Toyota Arena.

ZD: I thought tonight was one of the most complete, 60-minute games of the season. Would you agree with that and what did you think of the team’s overall play?

MS: Well to be honest, we couldn’t even get out of our own end the first couple of shifts, at the start of the game. I though oh boy this might be a long night? But we held our own and then got our feet moving. The guys played well against a very good team in a tough road building

ZD: Maybe a good 50 minute game then…..was it encouraging to see the team still creating chances up 3-2? And how big was that third period after what happened in a similar situation in Tucson a couple weeks back?

MS: What happened in Tucson two weeks ago? I can’t even remember what I had for lunch today. We weren’t going to waste time looking in the rear view mirror Dools. Eyes front, looking at the road ahead. The guys were determined to complete the task and they did.

ZD: Game day, bet it was chicken and pasta! Gabe Vilardi gets his first of the season tonight, plus an assist off of winning an o-zone faceoff. What did you think of his game tonight, and nice to see him get that first one?

MS: Gabe cashed in on his first of many professional goals. Got himself in front of the net and declared that “His” spot. Just kept whacking at a loose puck until it found its way behind the goalie. His assist was from winning a face off clean to Frk. It happened in 2 seconds flat. It was a thing o beauty