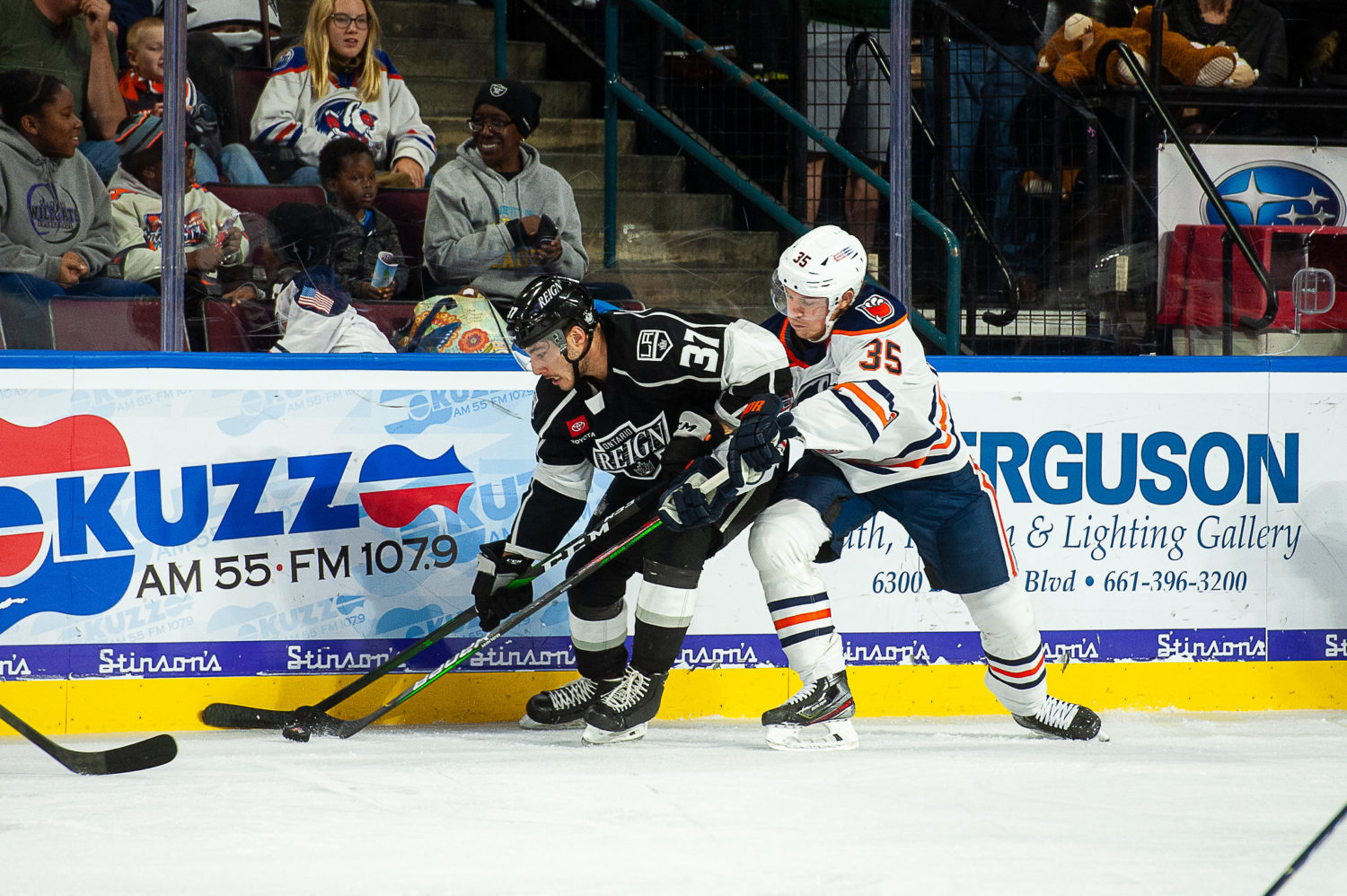 During the run of play, there wasn’t too much to separate the Ontario Reign and Bakersfield Condors tonight at Mechanics Bank Arena. Both teams created opportunities and both teams have their chances to seize control of the game. What made the difference this evening was that Bakersfield created higher quality opportunities, and better capitalized on its chances, converting once in each period, while Ontario was unable to do so quite as well. The visitors scored once in the third, had a goal disallowed and saw another two opportunities ring off the post. The result was a 3-1 defeat for the Reign, their seventh loss in eight games.

For a team that is struggling to score goals, consider forward Lance Bouma part of the solution. The veteran forward scored for the third time in four games and extended his point streak to four games, as he tallied Ontario’s lone goal on the evening. Bouma’s goal wasn’t a Sports Center Top 10 play, nor have any of his goals on his streak been, but it was the kind of goal that the Reign need to be looking to score. Bouma went to the net, got himself into a dangerous position and knocked home Drake Rymsha’s rebound to bring the Reign to within two goals early in the final period of regulation.

The Reign scored again to make the score what would have been 3-2, only to see their goal wiped off the board with 4:30 left in the third period. Martin Frk’s one-timer cleanly beat goaltender Shane Starrett, but the net was ruled to be off its moorings, which it was by a hair, though it was clearly dislodged by Starrett himself during the run of play. No minor penalty was assessed to Starrett on the play, the goal was not allowed, and the Reign pulled no closer than two goals down. A pivotal moment in the game, though Ontario had its chances throughout the evening to have turned tonight’s scoreline into a different combination.

The rule on the disallowed goal leaves a lot up to interpretation, starting with whether Frk’s opportunity was considered “imminent” or not (63.6). If it was, the goal should have been allowed to stand, though the net was dislodged 18 seconds prior to Frk’s goal. If it was not determined to be imminent, the referee could have awarded the Reign a power play (63.2), if it was deemed that Starrett dislodged the cage deliberately, which is up to your interpretation.

Mike Stothers said after the game that he did not receive an explanation from the officials on who dislodged the net, or when it was dislodged, simply that the net was off its moorings before the puck went in.

The Reign are off tomorrow, before returning to practice on Monday, in advance of another busy week. Ontario will, once again, play three games in four days, beginning with a trip to Stockton on Wednesday, and ending with a pair of games this weekend in the Inland Empire.

Mike Stothers on if tonight’s game was one where the play was pretty close, but Bakersfield simply took the better of its chances
Fairly even game, but they definitely had the edge in quality chances, and Cal was forced to be the better of the two goalies. They are deep and balanced on all their lines. We needed to get some production from a couple of the many power plays we had.

On the Reign’s power-play unit tonight
We scored just as a penalty expired on a Frk one timer and they disallowed it because the net was off. The play was similar to our game-winning goal from the night before. Both were shots taken by Frk. If you have nine power plays, each and every guy, on both units should have shots registered. You don’t pass the puck into the net, you shoot the puck in the net! We miss the net, or take too long to get the shot off. I could light the 58 candles on my birthday cake before we get the puck off our stick.

On Lance Bouma’s play, and if the type of goals he is scoring can rub off on others
Boomer is working hard and all his goals are from the hard areas. He is always driving and going to the net hard, he gets the ugly goals because he penetrates, and battles thru defenders. Nothing fancy about this big guy, he just competes and battles for every inch on the ice. Nothing wrong with seeing that rub off on some others