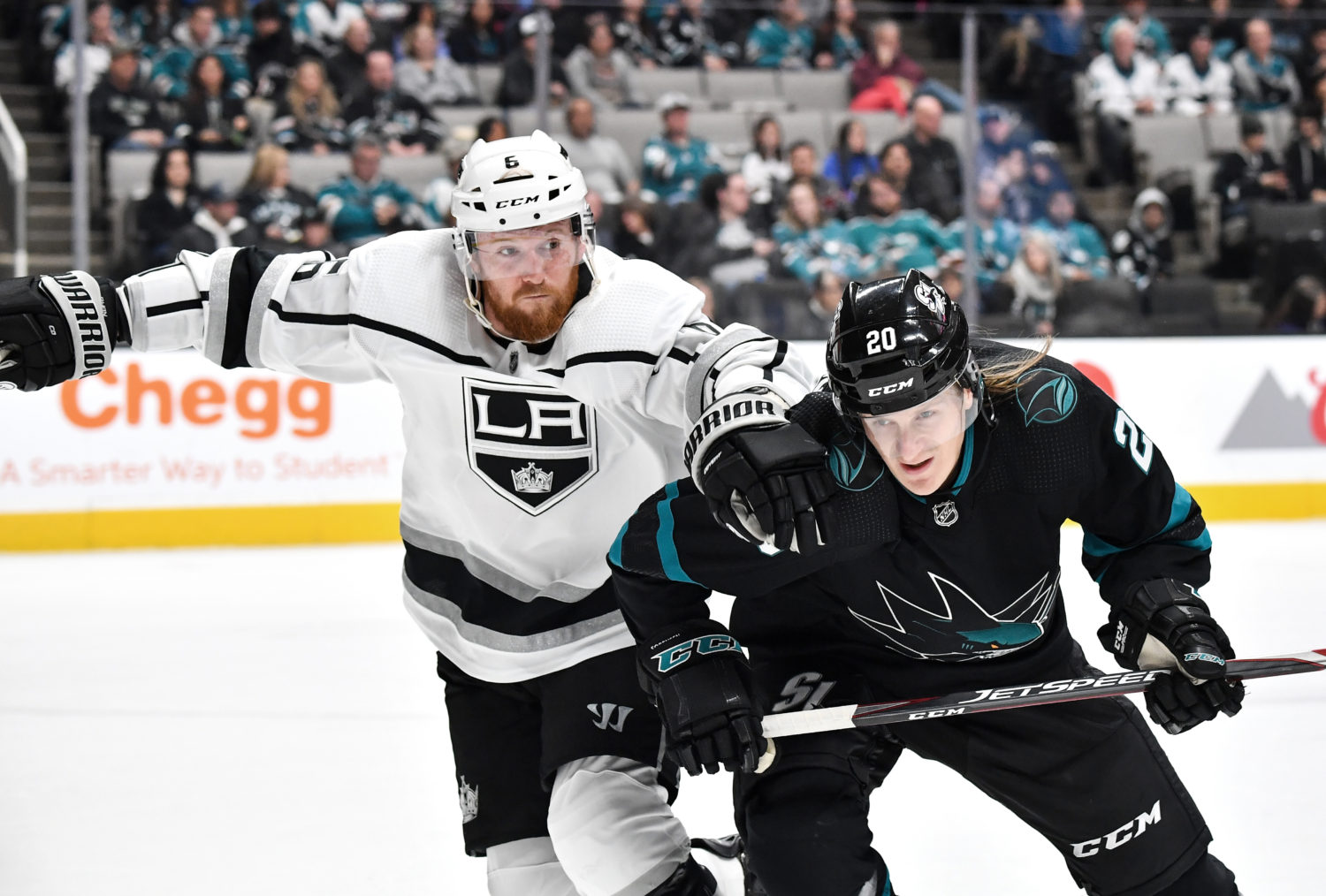 Todd McLellan, on the loss:
We didn’t have a good night. I think that’s pretty evident. Legs weren’t there when we needed them. Some of our key players looked like they were skating a little bit heavy tonight, and that’s a tough thing to have when you’re playing against a team like San Jose, because they do have some long speed, yet I thought it was a really strange game to evaluate. We gave up just enough to go down by four. There weren’t a lot of shots, yet we could’ve been down by seven because of all the posts. I don’t know if we created chances or not. It felt like we had chances, but I don’t think they were really good chances, so It was a really strange game on our behalf. But the bottom line is we weren’t good enough. We didn’t have legs, we didn’t execute passes and were just a step too slow mentally and physically.

McLellan, on whether San Jose’s third goal affected L.A.’s “will,” and if the schedule had an impact:
No, no schedule. You guys have got to quit asking me. I’ll tell you guys when the team is tired. It’s not the schedule. We’re playing just as many games and we’ve been home forever, so let’s take the schedule out of the equation, and let’s just talk about the play, and yeah, the third goal took a little life out of us. We had some momentum and they scored, but still a lot of night left, and there’s no reason not to work your way through it and do things right. I don’t know what the score was going to end up at that point, but it did take something out of us. We did have to push to get the players back on track and get them to attempt to do it right. Tonight, we didn’t have any energy, any legs. They had much more energy than we did. They exposed us in some areas, yet it wasn’t a runaway game. But it sure didn’t feel that way.

McLellan, on whether a “lackluster effort” in the teams’ second meeting this week was “disappointing”:
It’s disappointing when you don’t play. It doesn’t matter whether you played this team back-to-back or a month ago. You want to take each event as its own entity and show up and play hard. I’m not letting our guys off the hook by any means. Just we didn’t have what we needed to to play against this team tonight. We’ve got to figure out why and we’ve got to fix some things going on the road. But that’s the bottom line – we weren’t good enough.

Joakim Ryan, on what happened after the good start to the second period:
Like you said, the start of the second there, we were feeling pretty good. We put together a few O-zone shifts and we were getting chances, we were getting looks, we just couldn’t get one past Joner, and then obviously they score that 3-0 goal. It’s a little deflating, but you’ve just got to keep going and keep working back to the way we were playing before that, but we just didn’t really seem to be able to find the consistent stretches of that.

Ryan, on what it meant to him coming back to San Jose to face the Sharks:
It’s obviously being a little weird being on the visitors’ side of it, but I really enjoyed my time here. Made some great friendships, still friends with a lot of guys on the other team. Like you said, once the game starts there are no friends, but it’s good coming back, catching up with some of the guys. It was fun.

Ryan, on Todd McLellan’s message in a busy week with two games against San Jose:
I mean, we were familiar with the way they play. There are no surprises out there. We know what they like to do, and how they like to do it. So, I think tonight, the big message was the first 10 minutes of the game were going to be huge. We came out on t he wrong side of that – they scored one in the first 10 minutes. We’ve just got to be more consistent overall. You see there are good stretches where we’re playing our game and playing in the other team’s zone, and we’ve just got to put together more consistent shifts of that and stick with our structure and not run around too much in the D-zone. Kind of talk it out more and stick to the structure and not panic as much.

— With the loss, Los Angeles fell to 67-68-21 all-time against San Jose, a record that includes an away mark of 27-39-12. The Kings have a record of 0-1-1 in the four-game season series, which continues with games on December 27 at SAP Center and March 31 at Staples Center.

— Anze Kopitar’s four-game point streak was snapped. He has points in 10 of his last 12 games (6-8=14). He is three points from tying Wayne Gretzky (918 points) for fourth place on the Kings’ all-time points list.

— With his 557th career goal, Patrick Marleau moved past Johnny Bucyk into sole possession of 27th place on the NHL’s all-time goals list. He is now three goals behind Guy Lafleur (560), who ranks 26th.

The Kings are scheduled to have a 10:30 a.m. morning skate prior to their 7:00 p.m. game against the Winnipeg Jets. This practice is likely optional.

Todd McLellan, on Matt Roy:
Steady Eddy would be a perfect nickname for him. He shows up and does the same thing every day. Whether it’s practice or a game, you can count on him. You can count on his approach to the game, his input into the game. There’s not a lot of fluctuation in his emotional level. If it’s not going really well, he’s steady. If it’s going well, he doesn’t get too high. Other than the first two or three games of the season where I think it was hard for everybody, he’s been actually one of our better defensemen throughout the 22 games since then.

McLellan, on Roy’s consistency:
I think that’s what you’re looking for when you’re a coach. You want somebody you can trust, somebody you can put on the ice and consistently does the same thing on the positive side. Doesn’t have to be flashy, he doesn’t play outside his boundaries, if you will, and you know what you’re getting when he’s out there.

McLellan, on the importance of winning battles against a similar team to the Islanders:
Yes, from our perspective, and what’s been good about this series of games is there’s a lot of similarities, I believe, between new York and San Jose – the way they forecheck, their positioning offensively, how they generate scoring chances, so the preparation hasn’t been all over the map. We’ve been able to stay consistent. We’ve had six periods against that type of play. Two were average, four were pretty good. So we’re going to try and up that on the positive side tonight. The big thing for me is road. Playing on t he road. Now, can we take what we’ve worked on at home and apply it here? And sometimes you even have to simplify things a little bit more, so it won’t be as much about opponent or style of game. Can you bring what you need to bring on the road, even when you’re not getting the matchups? Momentum is swinging a little bit, can you bring what you need to bring?

McLellan, on whether there’s anything that stands out about the team’s home and road discrepancy:
Not necessarily with this team. For us, a lot of our road games came early, so I don’t know if it’s fair yet to completely judge our group. We’ve talked about this the last four or five days about them starting to understand and react rather than think on the ice, which is a good thing. Now we’ll get a good dose of road games, so it may be a better evaluation tool three weeks from now.

McLellan, on San Jose’s traditionally strong starts at home:
Well, you want to be direct right off the bat. We don’t need to be cute, fancy. We don’t need to overpass or overthink the game. Faceoffs are important early in a game here, and get to that first time out, if you will, at that 14-minute mark or whatever it is and take a breath there, but we get to choose a little bit, too. We can be the team pushing and being aggressive. We don’t have to sit back and try and weather the storm, and that’ll be our approach.

McLellan, on returning to SAP Center:
I enjoy going back to the rinks where you’ve worked at. Not the building – the building’s the building – brick and stone and seats or whatever. It’s the people in the building, and the amount of people that come by and say hello, or faces you recognize and you get to catch up with is special, and that’s hockey. We’re one big community, yet we all branch out and do our own little things. But coming back, it’s always nice to see familiar faces.