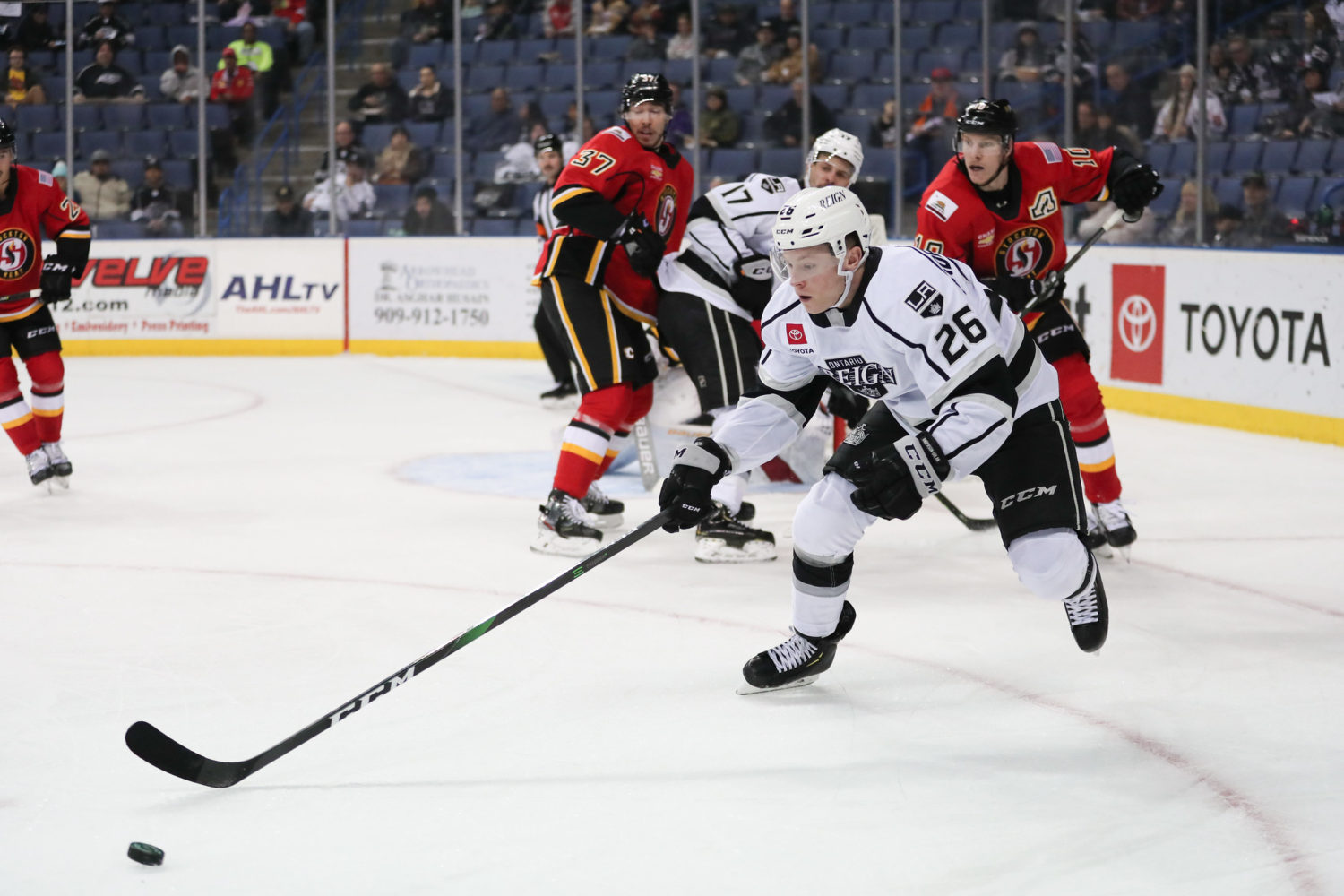 The Ontario Reign saw their losing skid extended to six games, after an 8-5 defeat against the Stockton Heat on Wednesday evening on home ice at Toyota Arena.

The Reign gave up three early goals, including two in five seconds in the first period, and eventually went down 8-1 in the third period. Ontario bounced back with four goals in the third, to cut the deficit to 8-5, and had a pair of power plays in the third to try and pull to within two goals but couldn’t move closer than three down.

The third period puts a positive on what was otherwise a forgettable night for Ontario. The Reign got three goals in a 1:16 span in the third and finished the game with a bit of momentum leading into a pair of games this weekend.

The Reign faceoff against San Diego at home on Friday, followed by a trip to Bakersfield and a matchup with the Condors on Saturday.

Gabriel Vilardi on how he feels tonight, as opposed to Game 1
Yeah, I definitely felt a little bit more comfortable out there. I mean, I thought I played alright tonight, much better than last game. There’s still some timing stuff I’ve got to work on, I’ve got to work on my goal scoring, I’ve got to pay more attention to that in practice and bear down. I’m getting chances here and I’m not burying them. [Reporter: Still, it’s only been two games, right?] Two games or not, if I’m going to take myself as an offensive guy, so if I’m getting those chances, and I’m getting looks out there…I’ve had two breakaways and I don’t even get breakaways. I think, starting tomorrow, I’ve got to start bearing down in practice too, it’s going to help me, I’ve got to start scoring goals here.

On the timing starting to come back a bit more
Yeah, it’s still going to take time, but I mean today, like I said, I definitely felt more comfortable. Just seeing guys quicker, reading the play a little bit faster. I think that’s something I’m pretty good at, I think I anticipate plays pretty good and it’s probably the thing I’ve got to keep on…not keep on working on, but it’s going to come, it comes with time. I haven’t played in a year, I’m not expecting to be a hero or anything. My reads will come and like I said, I’m getting chances and making a few plays, they’re just not going in and that’s where I’ve got to bear down, just little things. I remember Grunds was open, I gave him a backdoor pass on my backhand and just missed it, I didn’t put it in the one-timer spot for him to one-touch it, instead he had to take an extra touch. It’s just little stuff like that that maybe people don’t notice but I notice, that I’ve got to bury down a bit, but like I said, it’ll come with time.

Mike Stothers on the third period being a better period
Well, we scored some goals and at least. If nothing else, it gives the guys something to feel good about going into tomorrow and Friday and Saturday’s games coming up, because there wasn’t a whole lot going on and nothing positive until that flurry. It would’ve been nice to maybe start that flurry a little bit sooner, but for whatever reason, we didn’t have any jump and Stockton proved why they’re [near] first place, they’re pretty good.

On taking the timeout when he did, early in the first period
At that point, all you’re trying to do is just kind of settle things down. They score and score again and I didn’t really want to pull Cal to get their attention, so you try something that sometimes interrupts the flow of the opposition, sometimes it gives you a chance to just catch you’re breath and realize that, I think we still had 16+ minutes to go and it was 3-0. There’s still a lot of hockey left, so you’ve got to believe that you can still make a comeback. If you look at it the way we scored those goals in the third, if we could’ve just chipped away it would have been good, but we really didn’t give ourselves a chance when you only play, say one period of hockey.

On Derek Forbort standing up for his teammates with a fight while on a conditioning assignment
Well you know what, we addressed it between the first and the second. Here’s a guy that’s coming down on conditioning, he knows he’s coming back up to the NHL, he doesn’t really know his teammates all that well but it didn’t matter. He put on a Reign jersey, he saw one of his teammates get hit and jumped in. That’s exactly what you want and that’s exactly the kind of character that we’re looking for in the organization and that’s why Derek Forbort is an NHL defenseman. And he’s probably going to take Dermy’s job!

On if he wasn’t surprised to see Forbort do that, after he coached him in Manchester and Ontario
I know the character of Derek Forbort, yeah. He’s going to do anything he can to help the team. I just thought it was a tremendous thing to see. Sometimes, guys come down on a conditioning stint, and they know they’re going back up, they don’t want to get re-injured or have a setback or run the risk of breaking their hand. He didn’t even think about it, you saw how quickly he reacted, it was just a natural instinct. My teammate’s down, I’ve got to go in and help. Love it.