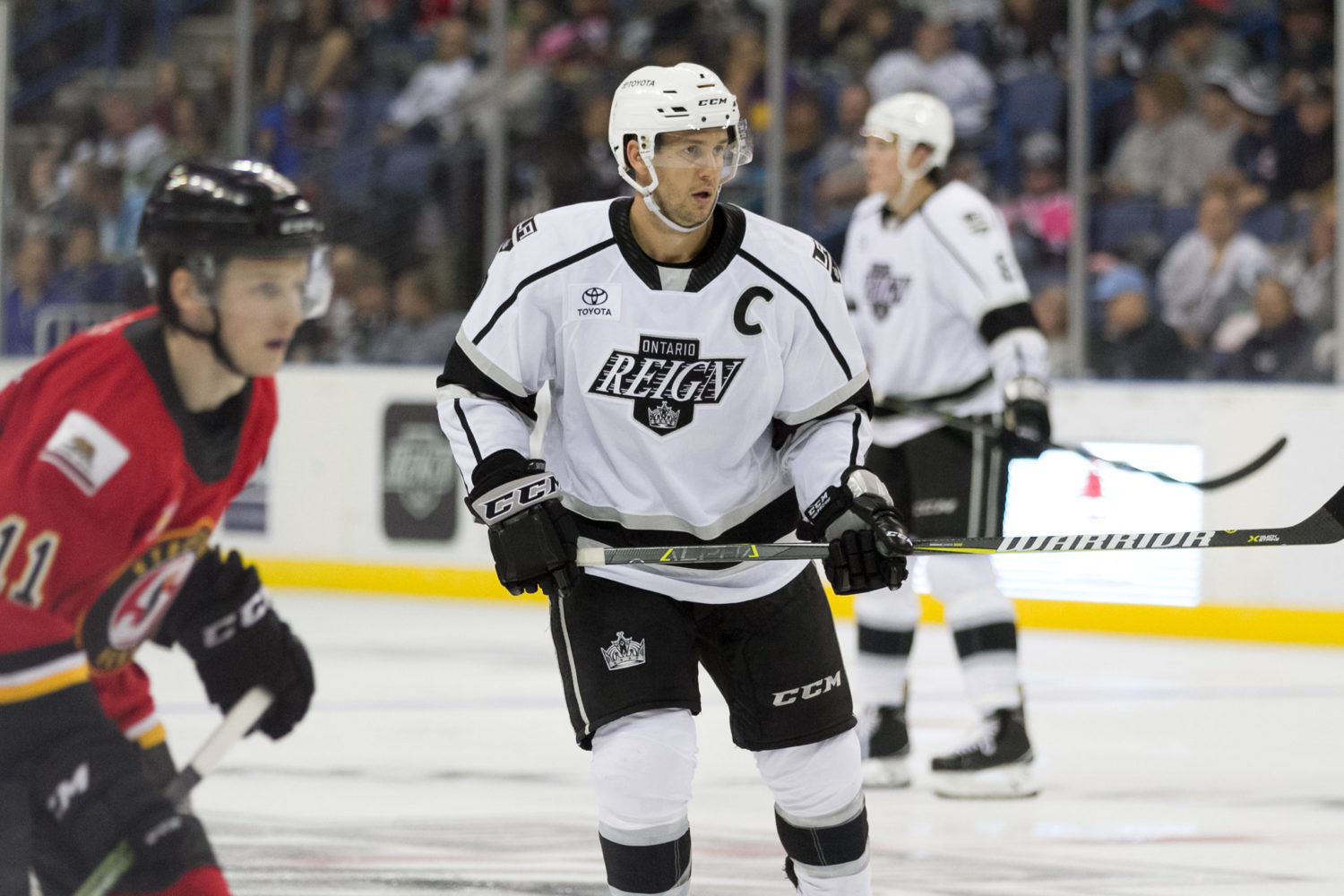 TONIGHT’S MATCHUP: The Reign host the Stockton Heat for the first time this season, in a Wednesday-evening showdown in Ontario. Tonight’s home tilt begins a stretch of seven of the next nine games on home ice for the Reign.

WHAT TO WATCH FOR: Through a series of roster moves this morning between Los Angeles and Ontario, here’s what’s expected for tonight’s Reign lineup. Defenseman Derek Forbort and forward Carl Grundstrom have joined Ontario, and are both expected to play tonight, while forward Matt Luff and defenseman Paul LaDue have been recalled to the Kings. Per this morning’s skate, defensemen Ryan Stanton and Chaz Reddekopp, along with forwards Stephen Baylis, Drake Rymsha and Stephen Baylis, were on the ice late after morning skate.

THE NEW ADDS: The Reign lineup this evening will be bolstered by defenseman Derek Forbort and forward Carl Grundstrom, both assigned by Los Angeles earlier today. Forbort joins Ontario on a conditioning assignment, after he missed the first 24 NHL games played this season with an injury. Grundstrom has amassed three assists from eight games played with the Kings and has seven points (4-3-7) from four games played with the Reign.

WE THE KINGS: On their way to the NHL are defenseman Paul LaDue and forward Matt Luff, both recalled earlier today by the Kings. LaDue is tied for the Ontario lead amongst defensemen with five assists and has six points (1-5-6) on the season – the North Dakota native has appeared in 67 career games with the Kings. Luff has amassed 10 points (3-7-10) from 15 AHL games played with Ontario and has one assist from four NHL games played with the Kings.

BIG SEAN: Ontario Reign defenseman Sean Durzi reached a pair of milestones on Saturday in Tucson. The rookie defenseman collected both the first assist of his professional career, as well as the first multi-point game, as he tallied two assists in the 3-2 loss against Tucson. Durzi has now totaled three points (1-2-3) from 10 games played with Ontario this season, with all three points coming in his last three games played.

NOTABLE IN NET: Goaltending was strong for Ontario last weekend, with both Cal Petersen and Matthew Villalta turning in strong efforts in defeat. Petersen made 42 saves on 45 shots faced on Friday, the second most shots he’s faced in a game this season, while Villalta made his first career AHL start on Saturday. The 20-year-old Villalta made 35 saves on 38 shots in a performance that Head Coach Mike Stothers called “outstanding”.

FRK YEAH: Ontario received reinforcements last weekend in forward Martin Frk, who paid immediate dividends with the game-opening goal for the Reign on Saturday in Tucson. Frk’s first-period tally was his eighth goal of the season, which leads all Ontario skaters. Frk’s return to the lineup came after he suffered a “mid-body injury”, which had kept him out of the lineup since November 6 in Colorado.

SCOUTING THE HEAT: Stockton enters tonight’s action as the AHL’s highest-scoring team on a per-game basis, averaging 3.88 goals per game. The Heat have been led offensively by a large group of players, with forward Byron Froese leading the team in goals (9), forward Justin Kirkland leading the way in assists (12) and forward Ryan Lomberg topping the charts in points (17). In total, nine Stockton players have double-figures in points on the season to date.