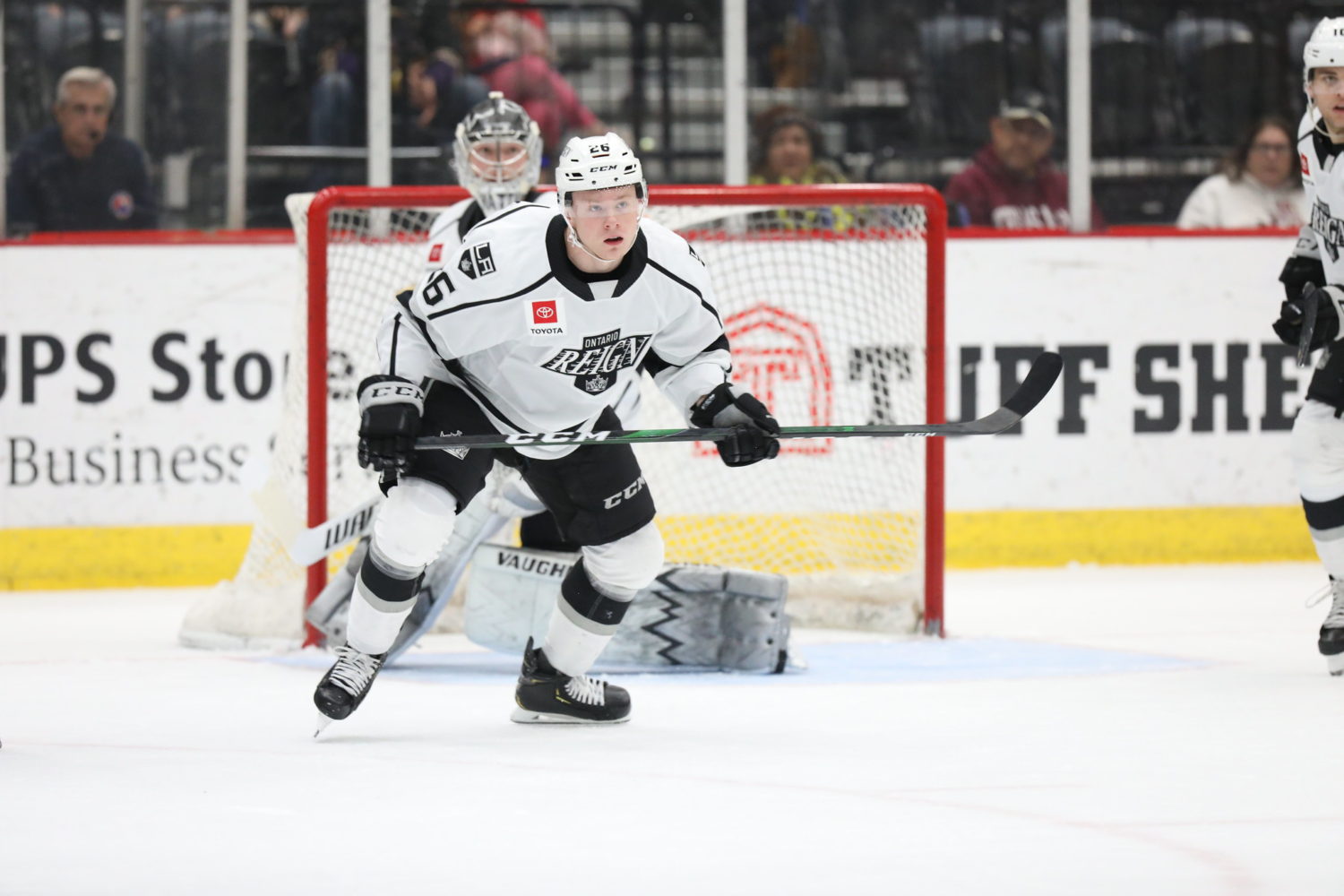 The Ontario Reign were on the ice this morning at Toyota Sports Performance Center for their final practice before a big 3 games in 4 days set this week, beginning tomorrow evening at home against Stockton, as the Reign look to snap a five-game losing skid.

Coming into Toyota Arena tomorrow evening for the first time this season is the AHL’s highest-scoring team (on a per-game basis) at 3.88 goals per game. Like Ontario, Stockton was at the bottom of the Pacific Division for much of last season, but has seen a resurgence this season and ranks second in the Pacific at 11-3-3 entering tomorrow’s action.

Ontario on the other hand has struggled to score goals as of late, after thriving in timely goal scoring in their 6-1-1 month of October. In their first eight games of the season, the Reign averaged 3.63 goals per game, a figure that has dropped to 1.60 goals per game in the month of November. A portion of that drop-off can be attributed to a struggling Ontario power play, which has scored on just four of its 40 opportunities during the month of November.

As Head Coach Mike Stothers said after Saturday’s loss in Tucson, a heavy dosage of “discipline and video” were on the horizon for the Reign, despite the shortened week of practice. After a pair of practices this week, forward Jaret Anderson-Dolan mentioned that exactly that has occurred as the Reign look to turn things around on the man advantage.

“We saw a lot of video on both fronts,” Anderson-Dolan said of special teams work. “Just working on it, out on the ice, getting some reps on our power play, it’s no secret that our power play hasn’t been good enough lately, so we’re just trying to get that dialed in. We had a pretty big goal last game on the power play, so it’s progress.”

“I think it’s a little bit of both,” the rookie centerman said. “We want to shoot the puck a lot, but saying that, if we’re just firing it from the outside, they’re not always great chances. I think we’ve just got to move it around a little bit more, have some confidence in what we’re doing and run some plays. We’re not getting enough shots in the first place, and when we do, I don’t think they’re grade-A chances.”

For his part, Anderson-Dolan took the onus on himself and his teammates executing the systems, not placing any blame on what they’re being asked to execute.

When on its game, the Reign power play has the parts and the ability to be a successful unit. Ontario converted at a 20% clip throughout its first seven games of the season, when the unit was at full force. Reinserting forwards Matt Luff and Martin Frk will help matters, with Frk’s one-timer a key weapon while the Reign are on the man advantage. Anderson-Dolan feels that a change in mindset, and better execution, will help move the unit back towards how it started the season.

“I think it’s just us executing, maybe a little lackadaisical on the power play,” he said. “I think just changing our mindset, trying to outwork their PK is what we’ve got to do. I think we’ve put the work in this week, showing video and doing it out on the ice, so we’re looking forward to the next game, it’s always an opportunity to get better.”

We also had a Reign debut over the weekend, as forward Stephen Baylis played his first career AHL game after a set of 10 games in the ECHL with Fort Wayne.

Baylis was recalled to fill what, at the time, looked like a very depleted Reign forward group, however with Matt Luff assigned by Los Angeles on Friday and Martin Frk returning from injury on the same day, the Reign now have 15 healthy forwards. After he was scratched on Friday, Baylis entered the lineup on Saturday night as a part of a line alongside Drake Rymsha and Mikey Eyssimont.

The Bowling Green product didn’t know he was playing until after warmups on Saturday’s game. He prepared all day like he was going to be in the lineup, with both he and Boko Imama taking the pre-game warmups session, and found out that he was only 20 minutes or so before puck drop.

“I think it went pretty well, I felt pretty comfortable out there, had some confidence,” Baylis said. “I just tried to keep it simple, stay on the good side of the puck and do my job whenever I got the chance.”

Baylis tallied three points from ten games played with Fort Wayne in what was the first experience of his professional career. The 25-year-old forward, who missed the entirety of training camp and much of the first month of the regular season with an upper-body injury, said his time in the ECHL was a learning experience about learning the way of life as a professional.

“I learned the pro hockey lifestyle and the style of play, it’s different than college,” Baylis said. “I just tried to fit in down there, get to know the guys and get to know the systems as soon as I could. It took a little bit of getting used to, but I think I got the hang of it after a few games.”

Baylis noted that his experience from playing at Bowling Green to now hasn’t been that different from a work-ethic point of view, but noted that players are bigger and stronger at this level, and that the depth throughout a lineup is that much greater than in the NCAA, where teams might only have one or two strong lines.

“Everyone’s capable of playing at this level, it’s definitely harder to make plays out there, but that’s a challenge we’re all willing to accept, that’s why we’re playing the game,” he said. “We want to get better every day. Playing against good players, you’re going to get better, so it’s all good.”

If you’re looking for a time to check out the Ontario Reign, Friday might be your day. Then Reign are offering a buy one, get one free ticket special for Friday’s rivalry game against San Diego, one of the best deals of the season. Tickets start at $25 for two tickets in the upper bowl and are just $35 for two tickets in the lower bowl, while supplies last.

Pretty sweet deal to take a look at the Reign – Deal is available HERE.

Buy 1, Get 1 FREE…..it's that simple! Take advantage of the BOGO Offer for our Black Friday home game against San Diego!