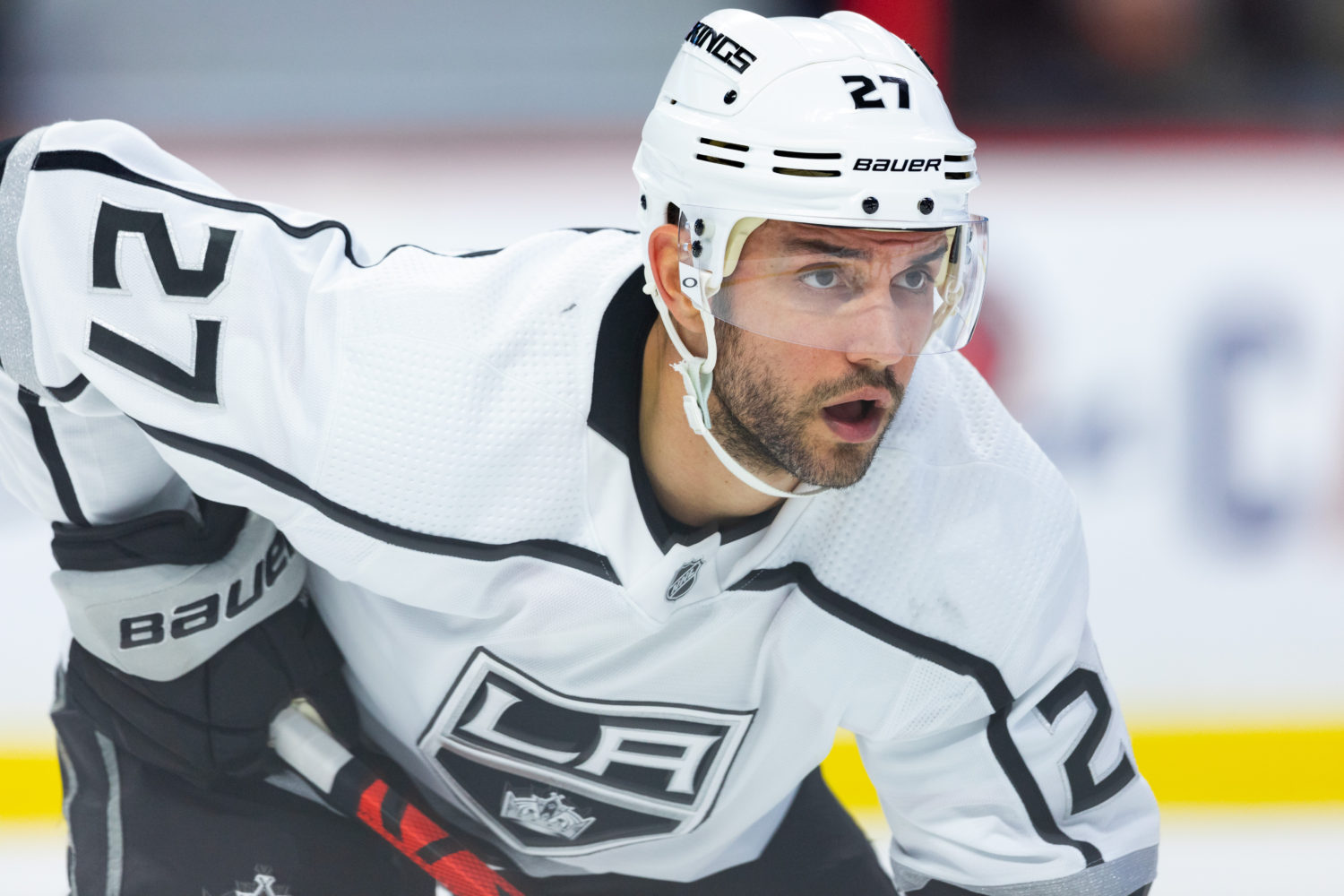 INSIDERS. A fine Tuesday evening to you. Lots more on these subjects Wednesday, but a recap of the day’s notes and events:

— Alec Martinez suffered a laceration to his right wrist in the third period Monday and was taken to Keck Medicine of USC, where he underwent successful surgery to repair a radial artery and two superficial radial nerves. He’ll be evaluated weekly and is expected to make a full recovery.

“I’ve been with him my whole career pretty much,” Trevor Lewis said. “He’s definitely a big part of our D and obviously a big part of our leadership, too. It’s tough to fill a guy’s role like that, but I think we’ve got a lot of depth here. It’s kind of a next man up-sort-of-thing until he gets back.”

— If the Kings choose to make a roster move to recall a defenseman – six healthy defenseman are available – it would be shared Wednesday morning as the team takes the TSPC ice for their game day skate. There are a few extra quotes below on the process towards filling the minutes vacated by the multi-situational Martinez, but the “next man up” cliché certainly applies, as Todd McLellan said.

“There’s players that’ve been waiting for more ice time and more opportunity. They will get it. It will give us a chance to evaluate,” he said. “A lot of that needs to be done from now until a certain part of the season, so there are players that will get more opportunity in certain areas, and I think of the penalty kill and power play being one of them, where Marty took many of those minutes and we’ll see if we can find something maybe we didn’t think we had. You always hope that player steps up and is able to provide that, so that’s by committee, and away we go. Every team has injuries and every team has to respond appropriately.”

— Speaking of Lewis, he expressed encouragement in getting through his first full-team practice with his teammates since suffering a lower-body injury November 7 in Ottawa. There’s no public timetable for his return, but he skated through more explosive bursts than while skating on his own and continued that momentum into Tuesday. “Today was a big step in getting a full practice in. It felt good out there, so we’ll see how tomorrow goes and see what happens,” he said.

As for Forbort, I’m of the understanding that he’s about to head out on a rehab assignment to Ontario. The Reign face Stockton on Wednesday and San Diego Friday at home before traveling to Bakersfield on Saturday, and to my knowledge a decision is coming as to which of the upcoming games he’ll play in. He’s close to his first live game action of the season.

— Because there’s a raised possibility of a Wednesday morning roster move, I wasn’t paying extreme attention to the rotating defensive groups. More to come from TSPC in the morning; quotes related to the above are below. Thanks as always for reading, Insiders.

Todd McLellan, on the nature of the discussion with the team after falling behind 3-0:
It was no yelling and screaming. It was just, ‘hey, this is where we’re at, and who are we?,’ and let’s decide. Sometimes it goes the right way after the talk – you get a goal, you feel momentum – and sometimes it goes the other way. There’s no magic wand or magic words that anybody uses, but they responded the right way. They give themselves a chance. That’s all you can ask.

McLellan, on gauging Alec Martinez’s status:
Rob and I and Kinger, we meet almost every day to get an update on roster and injuries and that type of stuff. My update was very similar to yours. I’m not a doctor, I just listen to what they have to say. First of all, we’re just happy that things went well for Alec last night and now he’s got some time to heal, and when he’s ready to play again, we’ll welcome him back because he’s an important part of this team.

McLellan, on whether it’s emotional for a coach when a player suffers a serious injury:
It’s a scary situation. When you talk about a skate blade to any part of the body, but particularly a really dangerous area, it can zap certain individuals more than others. I think it can take something out of you, especially if you’ve seen it. But we did a good job last night. I know the buzz this morning was a lot about Marty and how he was doing, and I believe he sent a group text out to everybody and it was a really positive thing, so that made everybody feel really good this morning.

McLellan, on the possibility of a Toby Bjornfot return, and what he’s heard about his recent play:
Well, he certainly could possibly return. There’s a group of players down there that are all eligible to be recalled at some point – toy being one of them. He in particular, I’m hearing his game’s coming along fine, and everything’s going as planned. Other than that, there’s nothing else to really report on his play. There’s others that are having good weeks, some guys fall off – just like our team. Guys get it going for a little while and give it back sometimes. Hockey’s hockey. They’ve got the same problems or issues that any other team has.

Trevor Lewis, on Alec Martinez’s injury:
I don’t like to watch it. It’s I guess just like pretty much anyone else’s. You don’t like to see it. I texted him a little bit today, and it seems like he’s in good spirits, so it’s good.

Lewis, on whether he’s surprised at how few skate cuts there are:
I think we wear a lot more stuff than people did back in the day. We have cut-proof socks, but some things, you can’t prevent them. Those things are knives out there, and you get in a vulnerable position like that and someone’s falling, it’s something you can’t really control. You never like to see it, and like I said, I’m thankful Marty’s all right.

Lewis, on what he wears for protection against cuts:
I mean, there’s Kevlar stuff in our socks – on our feet and the back of our socks. You try to prevent it as much as you can, but like I said, there are spots where the knives can cut through.

Lewis, on whether players are receptive to advances in safety and equipment:
I think the more you see the accidents happen out there, the more guys are trying it out, I think. I’d bet most of the guys in the league that are wearing the socks and everything now. Basically, you can’t really tell the difference between them and other socks, so I think they do a good job of trying to get the spots that your gear doesn’t cover, so it’s been good.

Kyle Clifford, on Todd McLellan addressing the team during a timeout while trailing, 3-0:
And you know what? We found it really quick after that. It’s about not letting those small lapses turn into more than just a shift or two. It’s kind of cutting them off there. 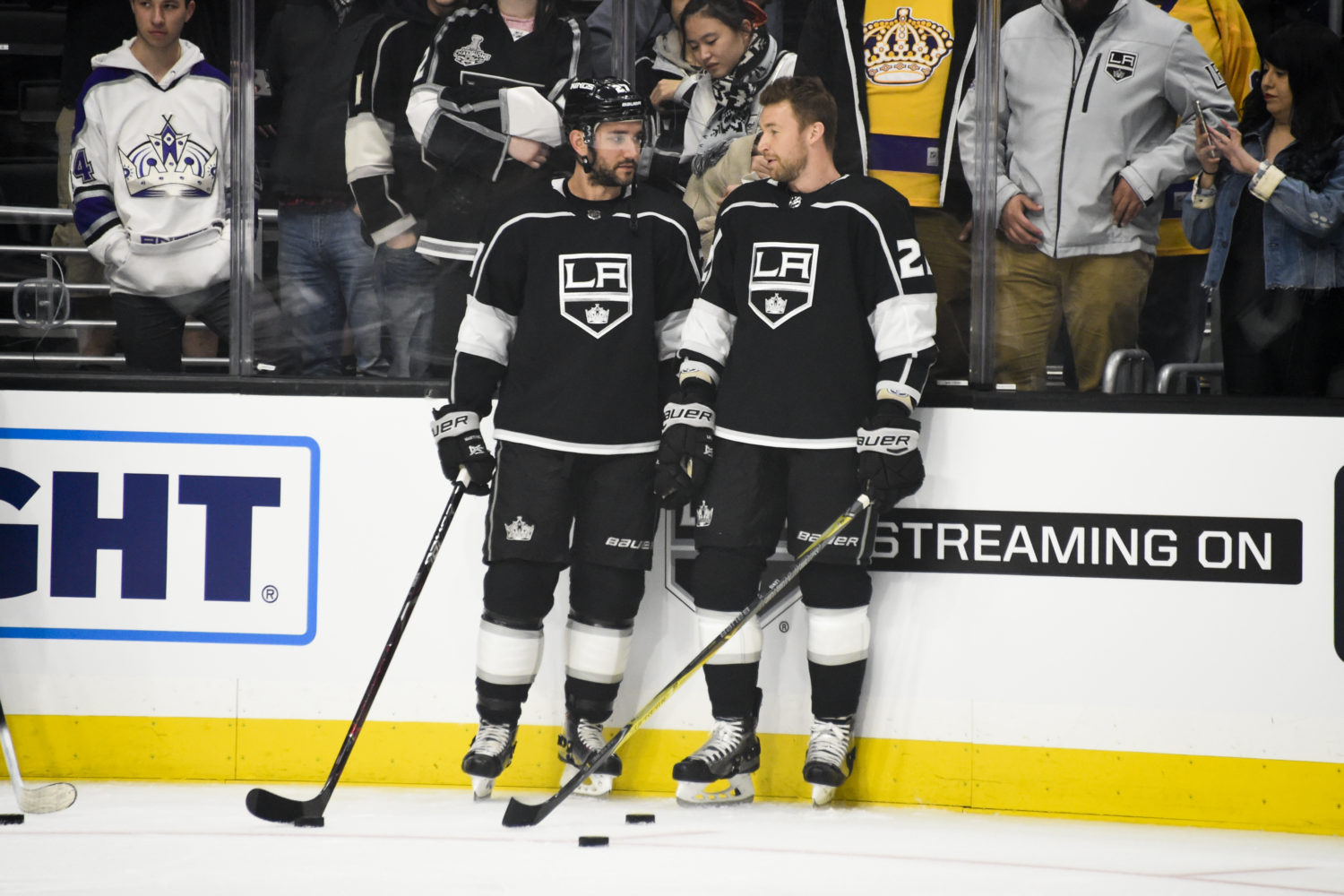 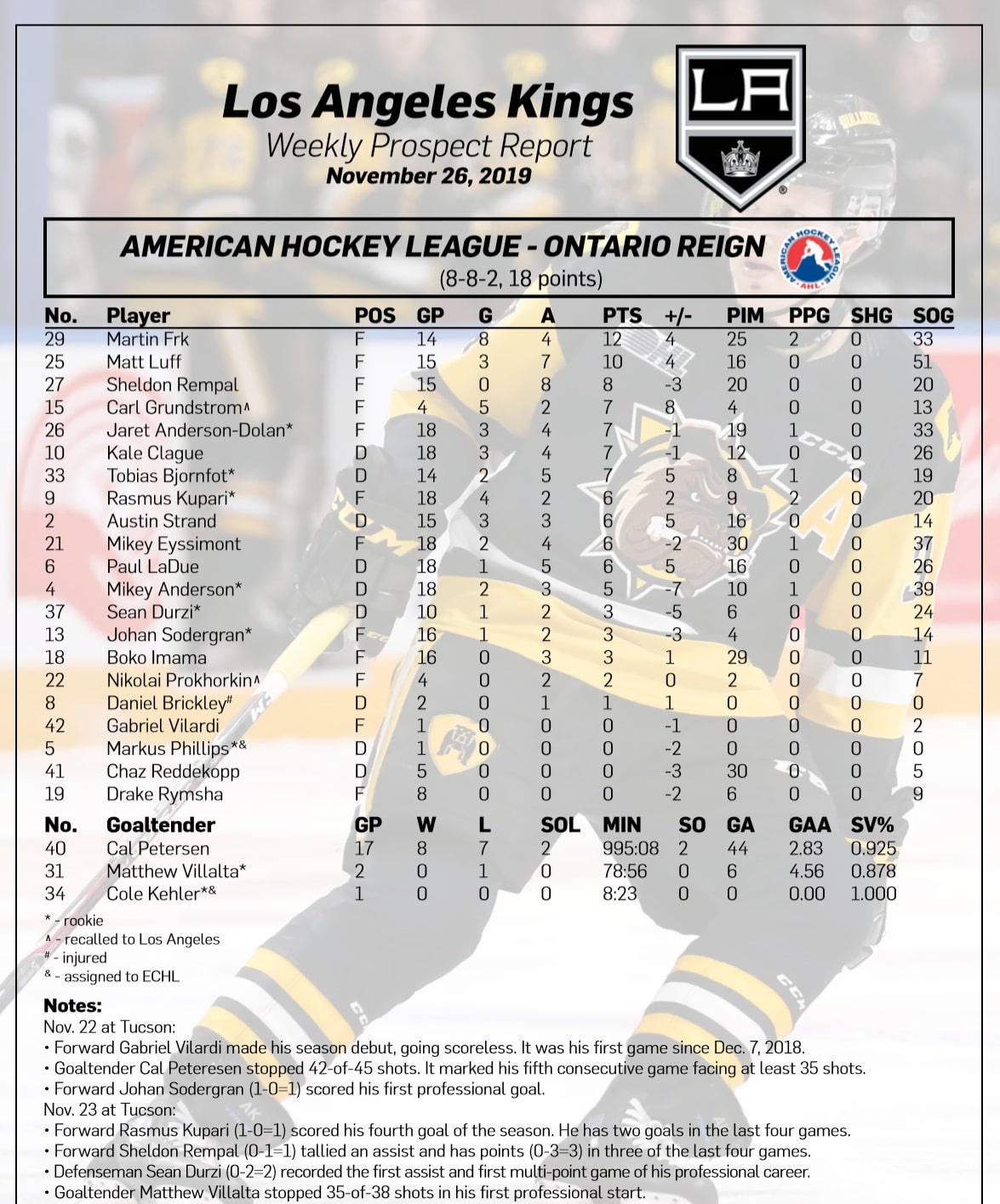 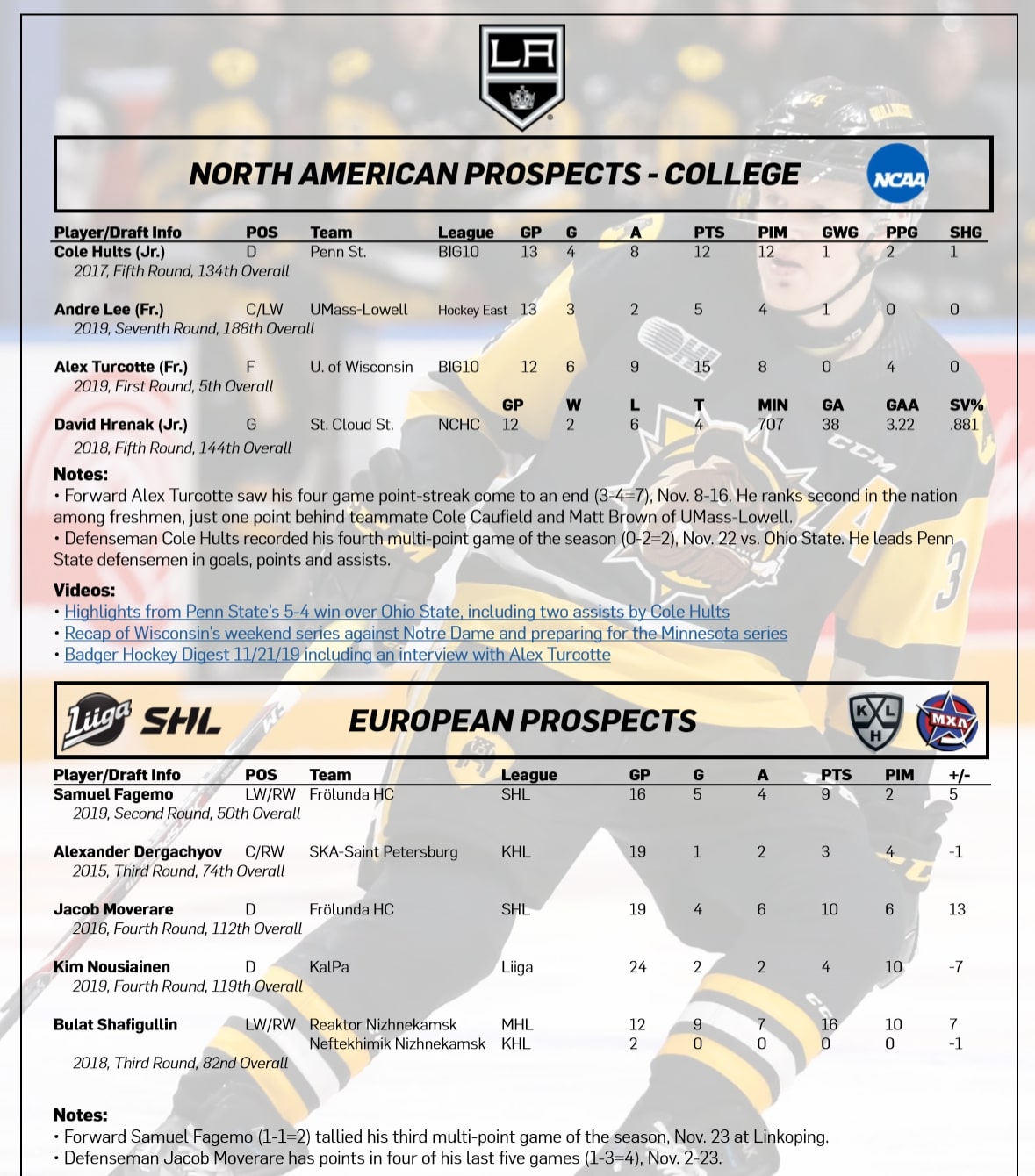 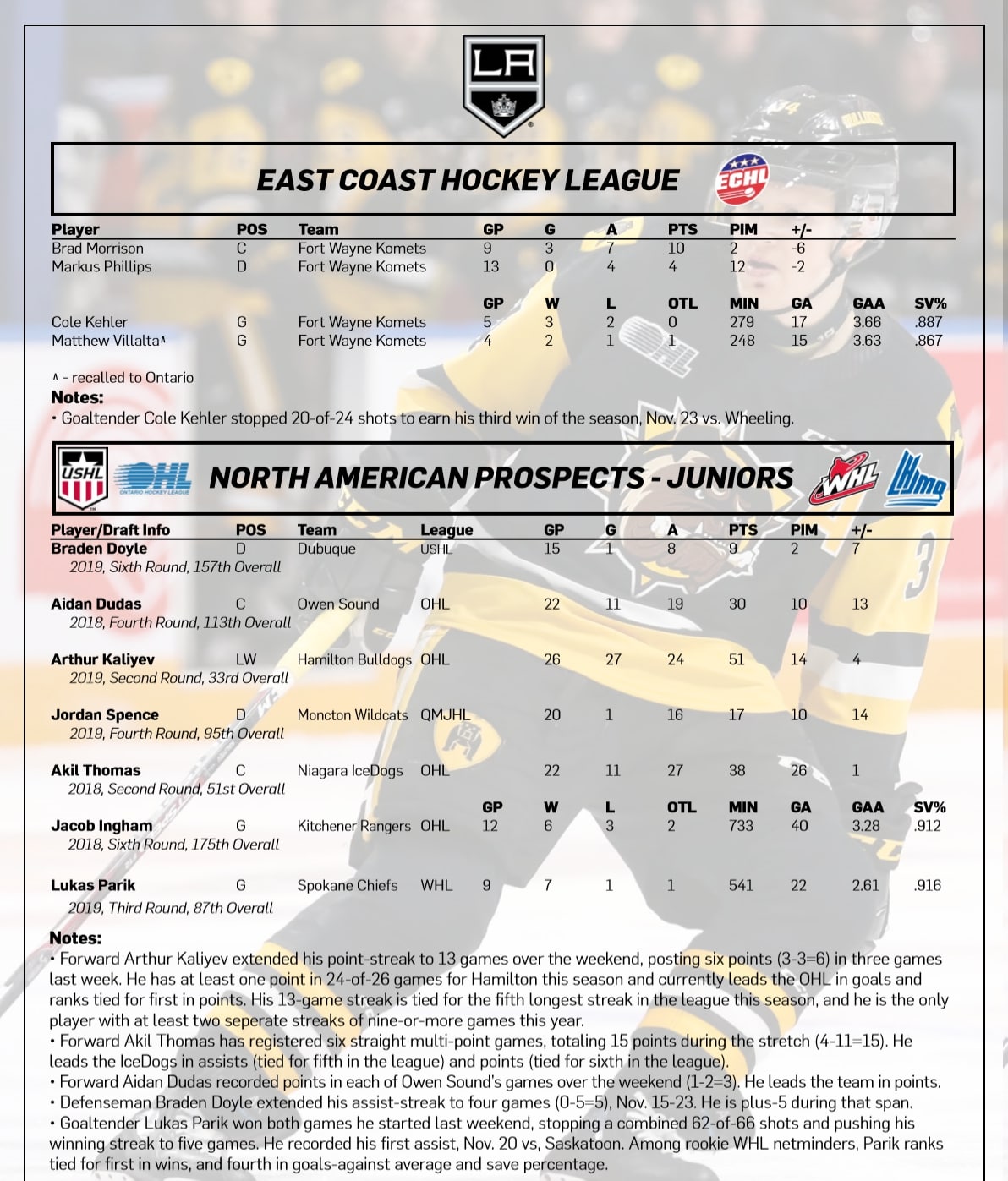 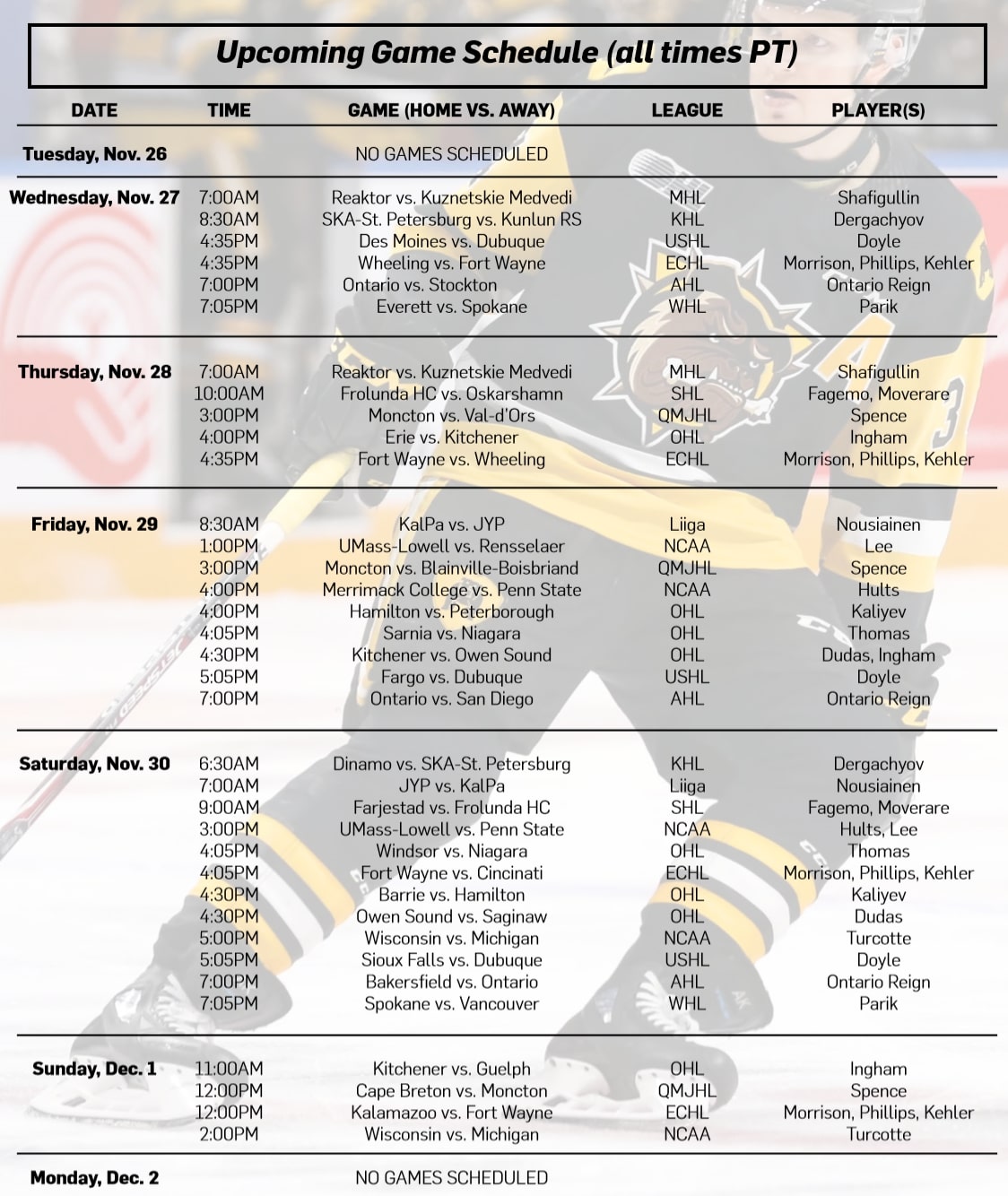