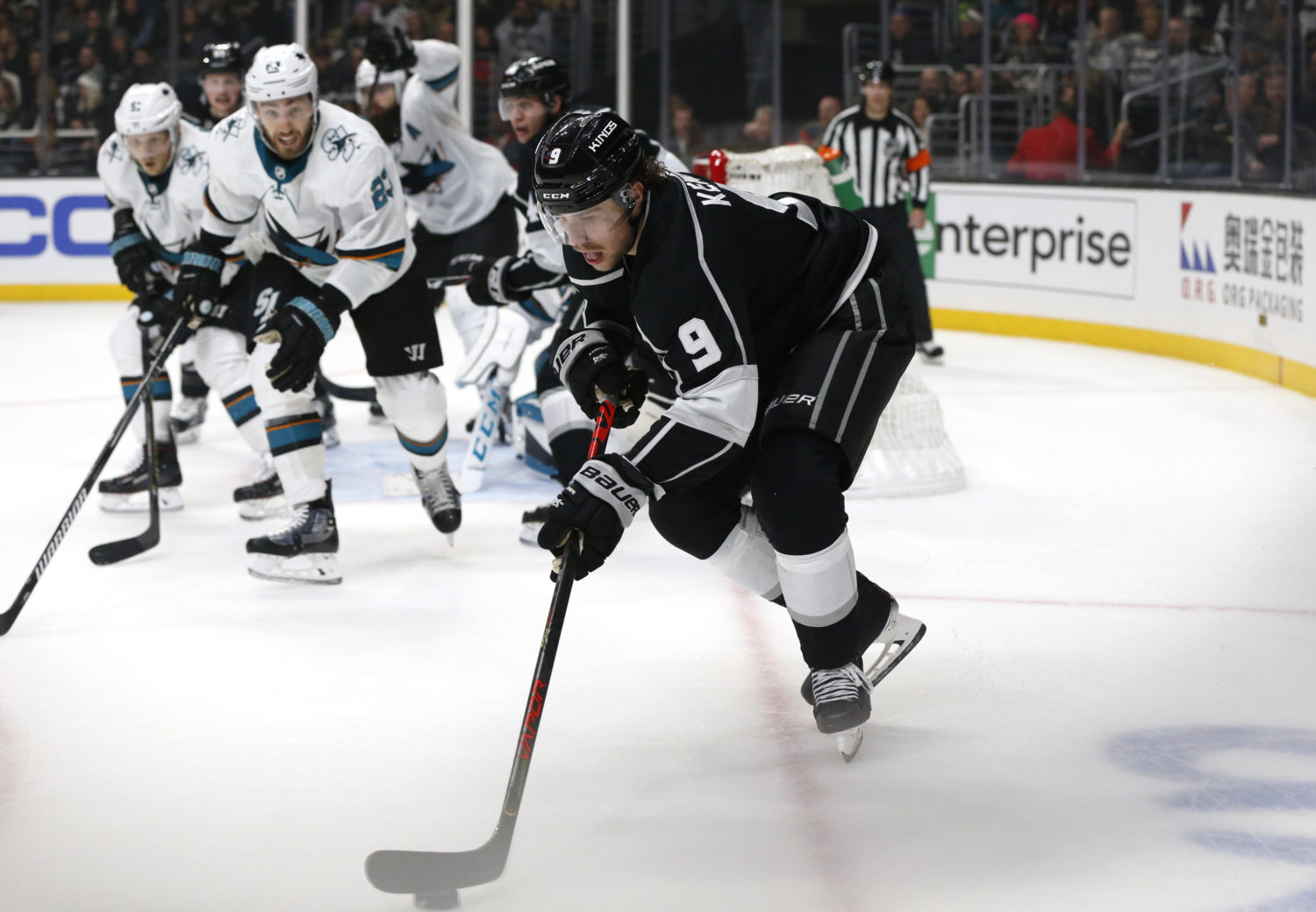 Alec Martinez suffered an injury to his right hand or wrist in the third period of Los Angeles’ 4-3 overtime loss to San Jose on Monday when he dove to swat a puck away from Melker Karlsson, whose skate made heavy contact with Martinez’s glove. Via @kingsgifs:

After the game, Martinez was taken to a hospital for further evaluation. More will be shared either on Tuesday, either by McLellan or the team’s PR staff.

“Marty took a skate into that arm area and got stepped on, and he’s going to be evaluated later on tonight, and we’ll have more for you tomorrow,” McLellan said after the game. “It’s obviously not a good situation, but it’s all I can really give you right now. If I had any more, I’d share it with you.”

Martinez, who appeared in 15:52 of ice time before leaving the bench, blocked three shots and registered one shot on goal amidst four attempts. In 24 games, he has five assists, a minus-one rating and 10 penalty minutes.

Todd McLellan, on the performance in the overtime loss:
It was a Jekyll-and-Hyde team. Actually, I didn’t mind our start. We were in it for a little while. Coughed up a few pucks, and as a result, they scored their first, and then after that we didn’t give up much. It seemed like the mistakes we made were in the back of our net, and I’m not insinuating that the goaltending was weak by any means – they just put ‘em in. And then something happened that bothered me a little bit. I thought we sagged. First time in a long time our shoulders dipped, our chins went down and that’s not who we are and that’s not who we’re going to be. So, we had to have a little chat about that, and give them credit. They came back and played and they pushed. Some of the things we wanted to do in the game, we started to see them come out in the third period. I thought the power play was outstanding. That’s what a real power play looks like when it’s going well against the best penalty kill in the league, so it gave us a chance to crawl back in, and unfortunately a broken play at the end that cost us a point, but sometimes it goes that way. We can’t control everything.

McLellan, on Adrian Kempe’s “life” on the power play and at five-on-five:
I think you answered your own question. He had a lot of life, he had legs, he made great plays, he was making tremendous decisions on power play entries. Got some shots off. Boy, if that’s the player that exists and he’s there all the time, that’s a pretty darn good NHL player. Now, we’re going to encourage him to bring that night after night, and I know not everyone has their best all the time, but that’s a hell of a night for him and starting to see some really good things from him.

McLellan, on any satisfaction in the performance despite the overtime loss:
I could answer that question and say ‘yes,’ but I think we’re letting ourselves off the hook, and that’s not why we come to the rink. We weren’t good enough in the first half of the game. We let things get away on us, we didn’t execute well enough. I’m really excited about the guys coming back but I’m disappointed that the fact exists that we let ourselves get to that situation, and we have to do a better job earlier in games. We’ll try and address it and come and play against a team that’s probably even hotter in the Islanders.

McLellan, on Alec Martinez:
Marty took a skate into that arm area and got stepped on, and he’s going to be evaluated later on tonight, and we’ll have more for you tomorrow. It’s obviously not a good situation, but it’s all I can really give you right now. If I had any more, I’d share it with you.

Adrian Kempe, on the overtime loss:
I think we had an OK first period. It was a little back-and-forth, and then the second period, they took it over a little bit. We didn’t give up a lot of chances, but they scored and they were effective on the chances they got. We were down 3-0, and we still f let like we were in the game. They didn’t outplay us or anything like that. We did some good things, and then we just needed a push. And then we got one late in the second and it helped us come back. It’s unfortunate we didn’t get the two points in OT, but I thin kit was a good fight-back performance from the entire team.

Kempe, on what went well in the “fight-back”:
Well, as I said, we did some good stuff and we just have to keep it going – get pucks to the net. We needed one from our power play tonight as well, and we had some opportunities and we finally got one, so it was a good goal. It was a pretty good comeback, butas I said, it was a tough loss in OT.

Kempe, on his own performance:
I think I had some chances in the game, too – five-on-five and on the power play. I’ve been having a lot of chances too on the season so far on power play, and I haven’t really taken advantage of them as much as I wanted to, so it’s about time that I did something on the power play. But I’m just trying to do my best out there and be effective with my speed and the power play as well.

Kempe, on his chemistry with Blake Lizotte:
We’ve been trying to get a lot of pucks back on the forecheck and stuff like that, and I think if you look back at our last game, we were OK on it but we weren’t really happy with our game coming into this game and we wanted to help the team as much as we could. We did a pretty good job of that tonight – we had some chances as we started to play together too, and I think as long as you create chances, it’s just a matter of time before you score, and it was nice to get one tonight.

Kempe, on the approach to the third period:
It was a pretty important goal going into the third. We were down two goals and we had some good looks on the power play, and we really needed one from the PP tonight and we got one in the third. It was a big, key goal, and I think we just needed to keep pushing. I thought we played a pretty good game. We didn’t give up that many chances, but they were effective, and I think we fought back pretty well in the third and we earned a point. It was a tough loss.

— The Kings fell to 3-2 in games decided in overtime and 42-21 overall since the switch to 3-on-3 prior to the 2015-16 season. With the loss, their winning percentage fell to .667, which is tied with Calgary for the best percentage in the league.

— Patrick Marleau scored his 99th career game-winning goal as a Shark. It’s the third most all-time by one player with one team (Gordie Howe-121, Alex Ovechkin-108). Marleau had been tied for third with Bobby Hull before the overtime goal. (via Darin Stephens)