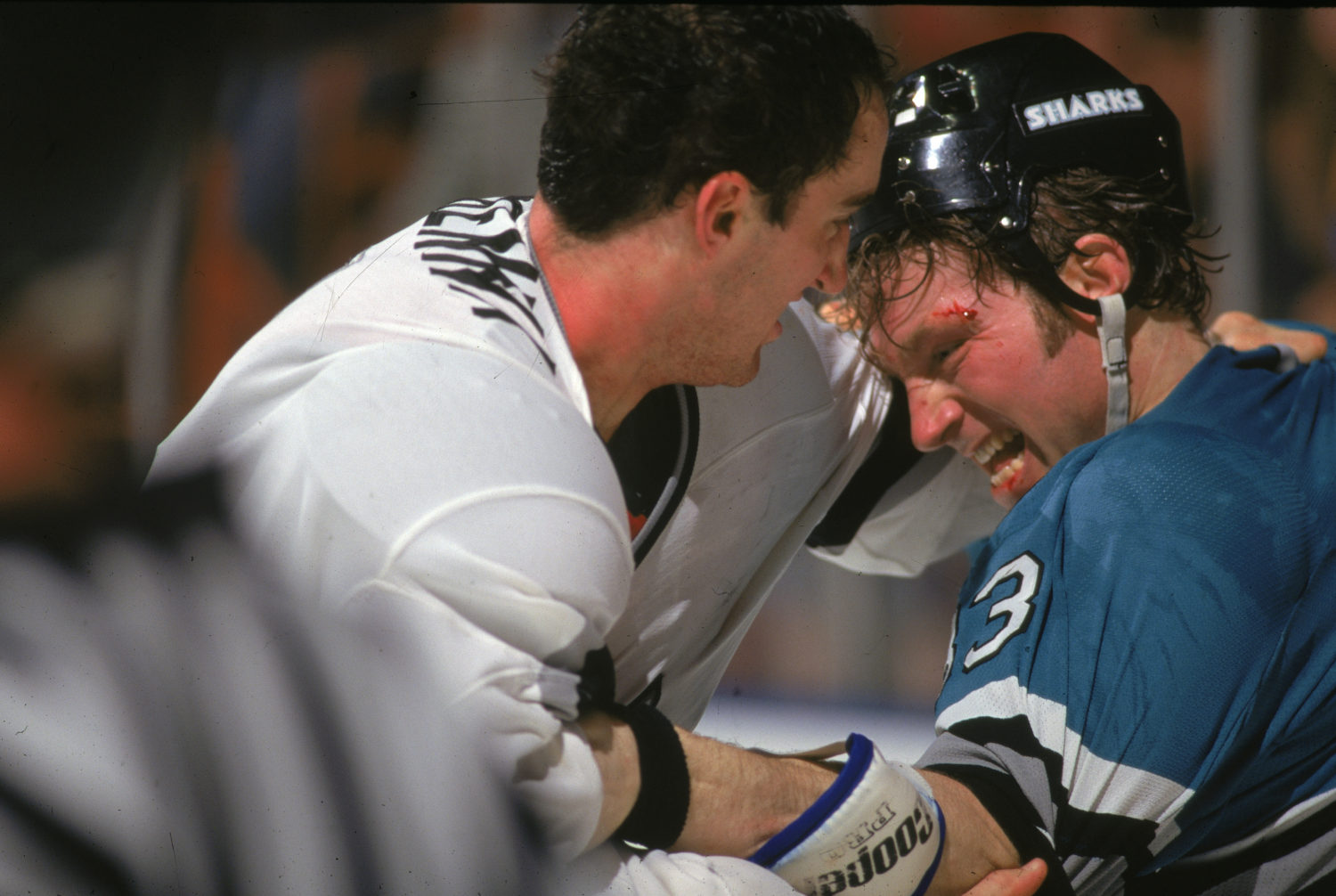 Insiders. A fine Monday afternoon to you from DTLA. The LA Kings took the Toyota Sports Performance Center ice shortly before 10:30 a.m. in advance of their game tonight against San Jose (FOX Sports West / FOX Sports GO / LA Kings Audio Network) and should align as they did Saturday against Arizona. This lineup should be a pretty good bet:

— The vitals: Jonathan Quick left the ice first and is the presumed starter in goal. He’s 17-11-6 in his career against San Jose with a 2.50 goals-against average, a .911 save percentage and three shutouts in 36 games. Quick was 2-0-1 against the Sharks last season, stopping 82 of 89 shots. Jack Campbell remained on the ice with Kurtis MacDermid and Ilya Kovalchuk, while Trevor Lewis and Derek Forbort added some intensity to their regimens.

After an off-day Sunday, players took part in a skate longer than many of the practices will be during this current 10-in-17 stretch, which began with last Thursday’s game against Edmonton. “We’ll be managing the gas tanks as much as we can throughout this two-week stretch, and we’ll be getting a lot of practice via video and review. Hopefully the players give us what we all need on the ice and give themselves what they need on he ice so that the review is a lot more positive than negative, and that’s always more beneficial,” Todd McLellan said.

They’ll still be able to mold teachings, practices and video sessions to the areas of their game that need adjustments. As McLellan shared, the game will predicate how practices and meetings are structured. “When you get into these phases of games or games-to-practice ratio, you become a repairman and you try to do it as efficiently as possible.”

— Their vitals: It’s Joner, and Joner has been good in his career against L.A., going 11-4-3 with a 2.09 GAA, a .928 Sv% and one shutout in 18 games. You know Joner, as does Joakim Ryan, who played 106 games with San Jose over the last two seasons and will face an ex-team for the first time in his NHL career. “He’s a calm goalie in the net. He always seems very relaxed and he moves pretty fluidly, so when he’s on his game, he’s really good,” Ryan said. “You’ve got to get people in front of the net and screens and whatnot if you’re going to score. To your question, he kind of reminds me, the way he plays, a little bit of Carey Price. Very calm and fluid. “

Tomas Hertl (lower-body) is out, and Melker Karlsson (upper-body) is a maybe, so San Jose may go with an 11/7 balance. If Melker is in – and I’m not sure he will be – expect to see Kane-Couture-Marleau, Meier-Goodrow-Labanc, Sorensen-Thornton-Gambrell and Gregor-Suomela-M. Karlsson up front with a back end of Vlasic-E. Karlsson, Simek-Burns and Dillon-Ferraro, with Tim Heed the extra defenseman who’d presumably get the nod in Melker Karlsson’s absence.

The Sharks lead the league in penalty killing, and that goes well beyond a recent surge in which they’ve accentuated their numbers with a 28-for-30 performance that carries over much of their recent success. “Yeah, as ‘recent’ as the last three or four years,” McLellan joked. “… I’m sure there are a lot of teams in the league that are trying to emulate some of the things they do there. Dave Barr, I worked with Dave in Houston. He’s tremendous when it comes to that area, so he does a really good job. Their power play’s starting to click a little bit more. The key people are scoring, they’re getting goaltending. To me, it’s just a team that’s gained a lot of confidence over the last three weeks. And they’re a team now that they should be. So we’re going to see their best, and that’s probably good for us. We’re only going to get better when we play against the other team’s best, and we’ll have a chance tonight to do that.”

This will be the first time since the 2006-07 season that the Kings will face a Sharks team that does not employ Joe Pavelski. But even if his shared ESP with Brent Burns has been disrupted, there are still players like Timo Meier, Evander Kane and Kevin Labanc capable of filling the role of a team that still relies on a strong forecheck that creates point shots and the subsequent screens, tips and deflections.

“Well, the quarterback’s still throwing the ball, and that would be 88, and the receivers have stood on the sidelines and watched the Deion Sanders, if you will, do it over and over again, so they’ve got to absorb some of that I would think at some point,” McLellan said.

— Good chat today with Ben Hutton, who’ll play in his 300th career NHL game. It’s not a recognized league milestone, obviously, but he still plans to put some money on the board to commemorate an even, round number “just to get the guys going and just to kind of celebrate having your 300th game. Everyone usually does when they hit a milestone, so it’s something unique and special in hockey and I’m glad I hit 300.”

The conversation then flowed towards a number of topics on his career to date: His first 20 games with the Kings; some of the most unique places he played; how opposing Hockey East student sections weaponized social media to taunt his teammates (made easier when a fellow Black Bear’s old guitar videos resurfaced).

Ben Hutton, on his first 23 games with Los Angeles:
It’s nice. Obviously, it’d be nicer if we were a little farther up in the standings, and I feel like points are a little hard to come by right now for myself, but I’m doing what I can to try and get the puck to the net and create offense. Other than that, just working with whatever D-partner I’ve been playing with, whether it’s Marty right now. I feel like each game we’re building more and more chemistry and on defending and getting the puck out quick and smooth.

Hutton, on having spent time in Utica, and some of the great atmosphere’s he’s played in:
Utica, it was awesome, it had a great atmosphere and the University of Maine, that was pretty special. The student section kind of hung right over the top of the away team’s goalie. [There were] a couple of different college things – the student section getting involved, which is very unique. Like, Notre Dame, I remember, did the classic [holding up the] newspaper, and on their paper it had a bunch of chirps for the players and stuff like that. So, some unique spots like that.

Hutton, on whether opposing student sections at Maine did research on their opponents:
They did. I think when I started going to Maine, that was when Twitter was kind of getting introduced, the Vines and stuff like that. Social media started to just pick up. So they were trying to find some dirt on players, which is funny. They figure out the guys girlfriend’s name, stuff like that.

— It’s a small and meaningless sample size, but Carl Grundstrom has made a territorial impact since re-entering the lineup last Thursday. At five-on-five in the two games opposite Tyler Toffoli on Jeff Carter’s line, he’s been on the ice for 41 attempts for and only 18 against, 26 shots for and nine against, nine high-danger chances for and one against, and two goals for and none against (via Natural Stat Trick). Said McLellan: “Yeah, he’s had an impact on the games since he’s been back in. It’s allowed Mods to probably position himself a little bit better in the lineup, and it puts Carts back into the middle, but I think Carts has some confidence now from the beginning of the year to be able to play through that middle-ice situation. When guys fall into the correct pecking order, your team has a much better chance, I believe, at success. When they’re playing up and out of the batting order, if you will, then it becomes a little tougher.”

— McLellan has been happy with the team’s even-keel approach recently. After struggles to stem momentum that bled into the beginning of November, he’s praised their recent “bump-up shifts” that follow a goal and are important in settling a game down. Those have improved, and he’s looking for more stability and fewer oscillations in their overall game.

There were questions about volume shooting and searching for quality over quantity. It tied into a discussion over the nuances of screening goaltenders. “One of the things I said after the game was we’re going to look at the traffic opportunity. Did we get to the goaltender’s eyes?”

A quick glance would indicate that yes, the Kings probably did on Saturday, because there was good traffic in front of Antti Raanta and a number of screens, tips and near-misses. But McLellan noted that a disproportionate percentage of their 78 all-situational shot attempts came quickly off zone entries (“where you can’t be in the eyes”) or cycle situations (“it goes low-to-high and you’re getting to the net but you don’t get there quite on time). He also alluded to the “Jacques Lemaire theory” he referenced after Saturday’s loss in which any person you send into the crease actually creates twice as many people in a position to block a shot and “all of a sudden there’s a wall of humanity there.”

Today marks the start of our food drive! Bring non-perishable food items to STAPLES Center and be entered to win a Kings Fan Pack! #GOALS pic.twitter.com/qSEmgOD2md