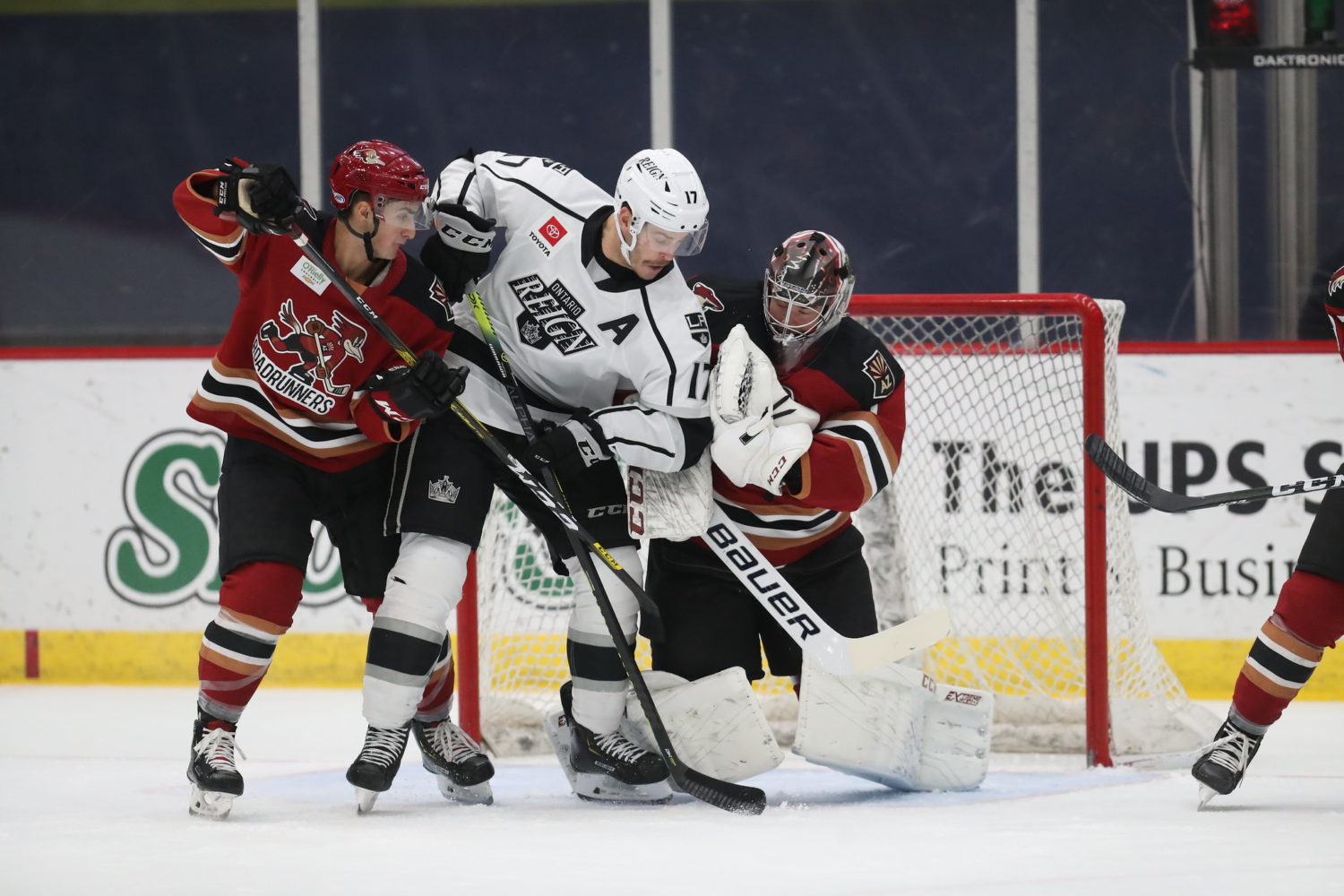 TONIGHT’S MATCHUP: The Reign and Roadrunners are back in action this evening to conclude a back-to-back set in Arizona. Tucson took Round 1 yesterday by a 4-1 final, as it improved to 2-0-0 against Ontario so far this season.

WHAT TO WATCH FOR: Expect some changes for the Reign this evening. The team had approximately two thirds of the team on this morning and here’s what can be expected tonight. First, Matt Villalta! For the first time this season, Cal Petersen is not expected to get the start in net, with Villalta off first this morning in Arizona, in advance of what would be his first career AHL start. While not confirmed, expect Mason Bergh in for Gabriel Vilardi up front and Sean Durzi in for Austin Strand on the backend, with the rest of the lineup expected to remain the same.

DON’T MESS WITH THE JOHAN: Forward Johan Sodergran scored the first goal of his professional career last night with a second-period tally. Sodergran’s goal gives him points in back-to-back games, after an assist last weekend in San Diego, and three points (1-2-3) from 15 games played on the season. Sodergran recently celebrated his 20th birthday on Wednesday, not a bad week for the rookie forward.

FOR PETE’S SAKE: Reign netminder Cal Petersen may finally get a well deserved night off, after he turned in another stout performance yesterday, with 42 saves on 45 shots in a losing effort. Petersen has now faced at least 35 shots in each of his last five starts, as well as seven of his past eight. At 630 shots faced on the season, Petersen has seen more than 100 shots more than the next nearest goaltender. The Notre Dame product also leads the AHL in saves and minutes played on the season.

GABEUT: Forward Gabriel Vilardi made his season debut last night, as he went scoreless in the 4-1 defeat. Vilardi centered a line with Brett Sutter and Matt Luff in his first game action since December 7, 2018, which also came with Ontario in Tucson. As per a pre-determined plan, Vilardi is not expected to play this evening in the second half of the back-to-back. Read more on Vilardi from last night post-game recap.

PAUL IN: Ontario defenseman Paul LaDue collected the lone assist on Sodergran’s goal last night, his fifth assist and sixth point of the season. LaDue’s five helpers are the most among all Reign blueliners, one ahead of both Kale Clague and Tobias Bjornfot. With a +1 rating last night, LaDue is also tied for the lead for active Ontario players with a +5 rating on the season, along with Bjornfot and defenseman Austin Strand.

VILLY, VILLY: As stated above, goaltender Matthew Villalta is expected to make his first career AHL start this evening. Villalta was reassigned to Ontario earlier this week after eight games in the ECHL with Fort Wayne, where he posted a 4-3-1 record with the Komets. The rookie netminder made his AHL debut with the Reign against Tucson on October 12, as he made eight saves in one period of action in relief of Cal Petersen.

SCOUTING THE ROADRUNNERS: Tucson remains atop the Pacific Division with a 13-4-0-0 record after last night’s win. At .765, the Roadrunners have the top winning percentage in the Western Conference and the second-best mark across the entire AHL. With a goal yesterday, forward Lane Pederson leads all Tucson players with 11 tallies and 19 points on the season, with his goal count ranking tied for fifth across the AHL.